The father-son dynamic as a storytelling device is nearly as old as storytelling itself, but it continues to be one of the most powerful. Take, for example, Homer’s The Odyssey. Its epic story, which centers on Odysseus’ 20-year journey away from his wife, Penelope, and son, Telemachus, was written in the 8th century B.C. But the central theme of that tale — a father determined to get home to his son — remains so relevant that it was a key point of inspiration for James Gray as he was writing Ad Astra, his September space epic. “I thought, ‘What if the focus was on Telemachus’ point of view, where the father had gone away for 20 years and Telemachus went to search for his father?’ ” Gray says of his story about an astronaut’s mission into space to find his dad. “The idea was to explore this idea of abandonment and what it meant for his soul.”

Gray isn’t the only filmmaker in 2019 to use this intrinsic connection between fathers and sons as his emotional through line. Some movies were inspired by real-life relationships, like Shia LaBeouf’s Honey Boy, the Amazon film based on the former child actor’s tumultuous relationship with his dad; or Paramount’s Rocketman, which sees a young Elton John (Taron Egerton) abandoned by his father but still searching for his approval. Other stories are fictional but pull from the same universally relatable dynamic, like the one in Todd Phillips and Warner Bros.’ Joker, in which Arthur Fleck (Joaquin Phoenix) is desperate to connect with his alleged father, Thomas Wayne (Brett Cullen); or Waves, about a high school wrestler whose father’s high expectations push him emotionally and physically.

“Those can be some of the most complex relationships of our lives, for better and for worse,” says Waves writer-director Trey Edward Shults. His A24 film stars Kelvin Harrison Jr. as a young man whose father, played by Sterling K. Brown, demands success from him in everything he does, from work and school to wrestling. Shults, who was a wrestler growing up in Montgomery, Texas, says the film is quite autobiographical and inspired by his relationship with his stepdad. “I built up a lot of resentment because I felt like he was so hard on me and I couldn’t open up with him,” he says. 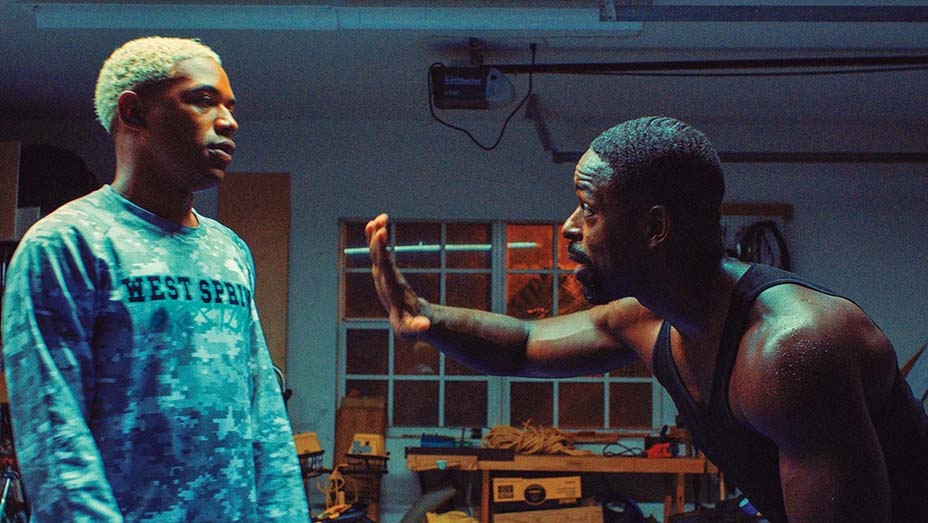 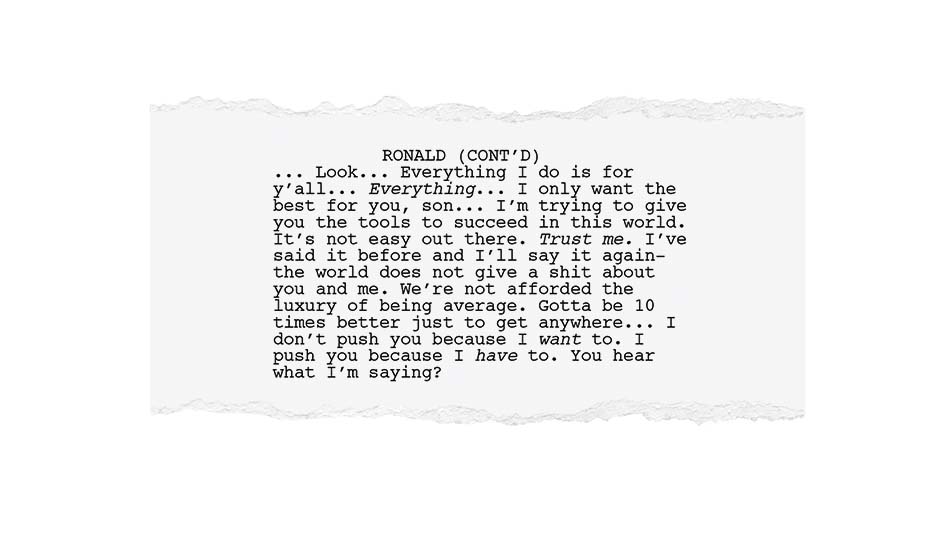 Shults, who had collaborated with Harrison on the 2017 horror film It Comes at Night, brought in the 25-year-old actor early in the screenwriting process for Waves so he could add his own personal stories. “He was a music prodigy, his dad’s an incredible musician, his mom’s a singer, and they grew up in New Orleans. So music was his future,” says Shults of Harrison. “His dad pushed him very hard with music.”

Indeed, what ties all these stories together is the fact that the screenwriters pulled from their own experiences with their fathers. “I’m so uncomfortable talking about this, I have to confess,” Gray says when asked about the parallels his story has to his own life. “I’m not estranged from my father, but relationships are complicated.” One scene in Fox’s Ad Astra sees Brad Pitt’s character, Roy McBride, sending out a recorded message to his dad, whom he hasn’t seen or heard from in 16 years. He starts out reading from an emotionless script but then breaks down and sends out a pleading message that reveals how his father’s abandonment has affected him. For inspiration for that scene, Gray dug up letters and emails that he’d written to his dad but never sent. “It was just speaking to my own father,” he says of the scene. “I remember that specifically because that was one of the scenes in the film that we didn’t rewrite many times.” 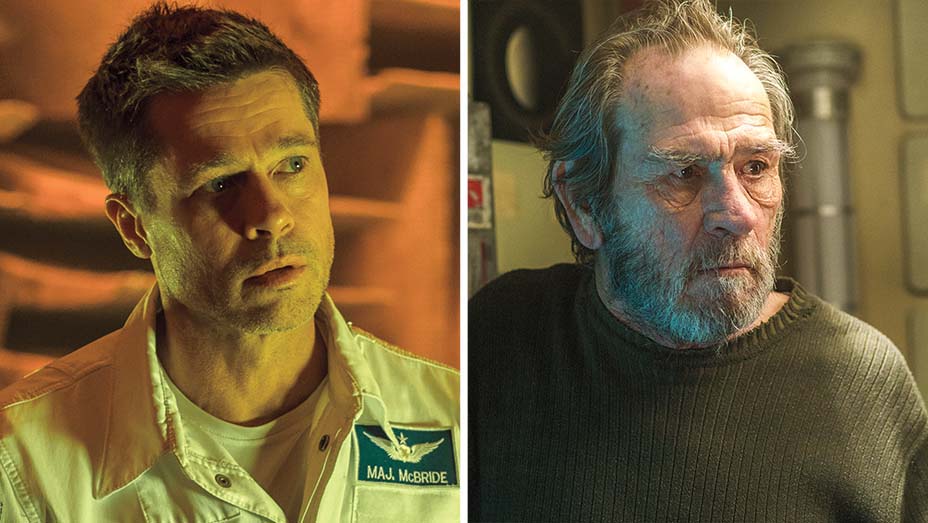 McBride’s quest to find his father (played by Tommy Lee Jones) takes him on a dangerous journey to Neptune and to the outer limits of space, where his dad may be in hiding. “In some sense, the search for the father is actually a totally internal search for one’s own identity,” says Gray. “There’s so much that’s defined by both mother and father, and when you construct an idea of yourself, it has to do with how present or how absent the father was. Honestly, that display of love is such a major thing in shaping our sense of ourselves.”

In Sony’s A Beautiful Day in the Neighborhood, journalist Lloyd Vogel (Matthew Rhys) also was abandoned, at least emotionally, by his dad (played by Chris Cooper). But he finds himself re-evaluating that relationship after meeting Fred Rogers (Tom Hanks) for an interview. Screenwriters Micah Fitzerman-Blue and Noah Harpster, who adapted Tom Junod’s 1998 Esquire article about Rogers, used Junod’s writings about his father to inspire this main point of conflict in their film. “We loved how he wrote about his father, the spirit of the man, his pride, his own faults and how his father’s faults reverberated throughout his life and shaped his world view,” says Fitzerman-Blue. “As any screenwriter does, we began to merge Tom’s experience with our experience, things that felt right to us, things we were going through with our own fathers. And from there, we end up having to compress a very complex relationship and backstory into an hour and a half.” 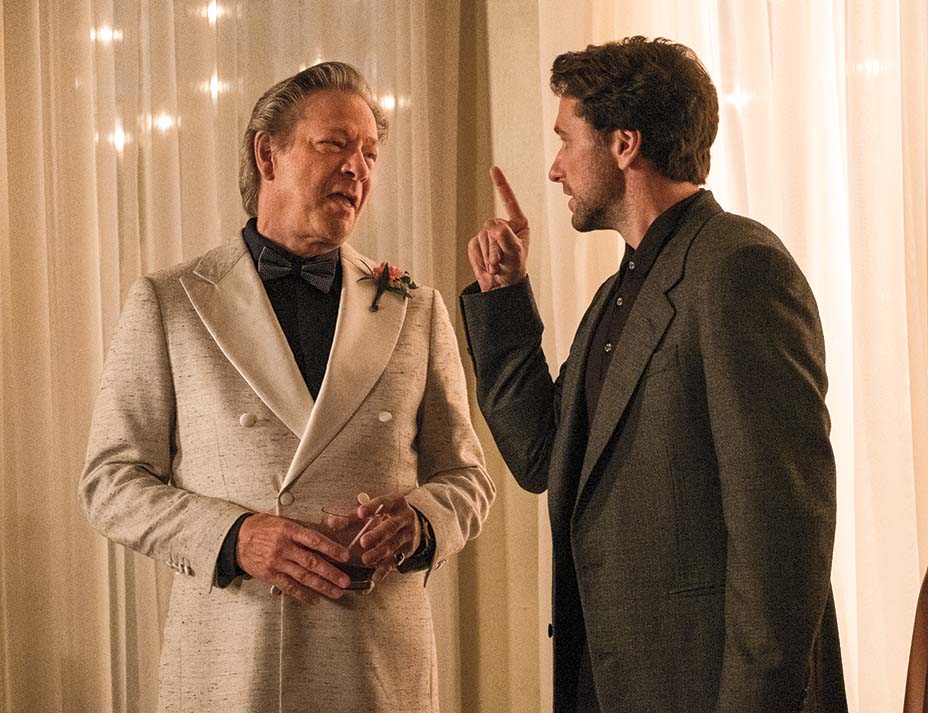 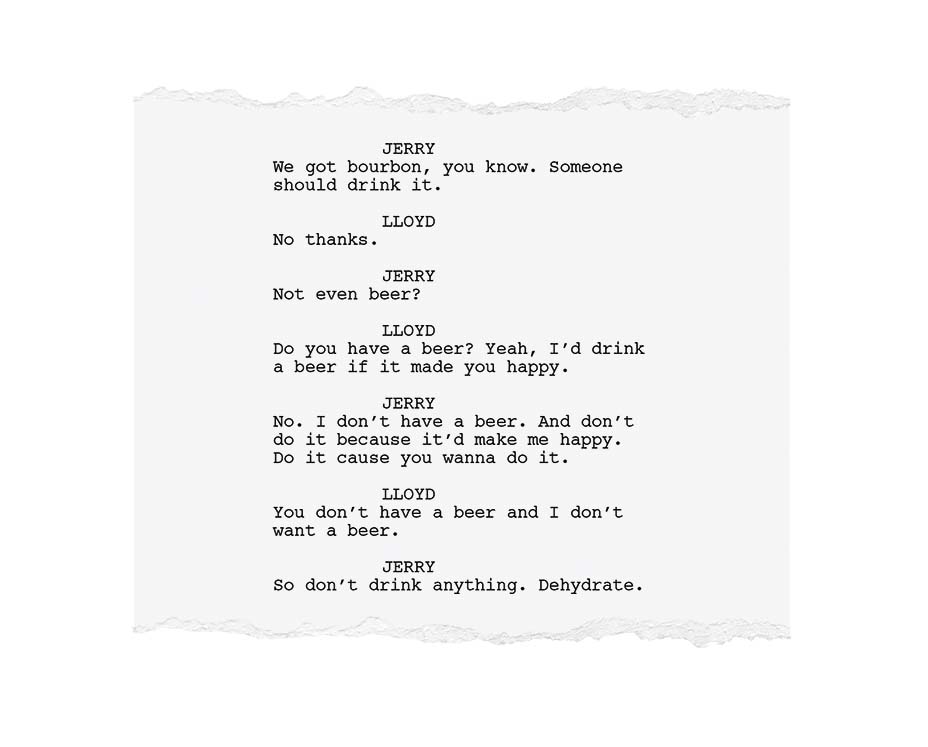 Ford v Ferrari screenwriter Jason Keller also had to compress a very complicated story into a shootable script. The Fox film centers on Carroll Shelby (Matt Damon) and Ken Miles (Christian Bale), who were hired by Henry Ford II (Tracy Letts) to design a Ford racing car. In early drafts, Keller focused on the many father-and-son issues playing out among the main characters. The script was filled with details about Ford’s relationships with his father, Edsel Ford, and grandfather, Henry Ford. After his dad’s death in 1943, Henry Ford II was fast-tracked to run the business. The weight of carrying on his father and grandfather’s legacy was a heavy burden. “There were drafts of the script where I really was interested in how Henry Ford II was animated in his every day by the fathers that had come before him,” says Keller. He also had written much more about Enzo Ferrari, founder of the Italian sports car manufacturer, whose status as the leader in car racing was threatened when Ford entered the picture. Keller’s early drafts explored how Ferrari was affected by the loss of his son Dino, who died at age 24. “His decisions as a car manufacturer and a team leader, all of these things, these important business decisions or design decisions were, in many ways, affected by the loss of Dino,” says Keller.

While much of that was cut from the final draft, Miles’ relationship with his young son, Peter (played by Noah Jupe), remains a prominent part of the film. Peter often joins Miles at the racetrack, an experience that parallels Keller’s own upbringing. He was born and raised in Indianapolis, and his father was from Speedway, Indiana, home of the Indianapolis 500. “If you’re a young boy in Indiana growing up in the ’70s and ’80s, you’re into racing,” he says. “It was a thing my father and I did every year. I’ve probably been to 15 Indy 500 races.” 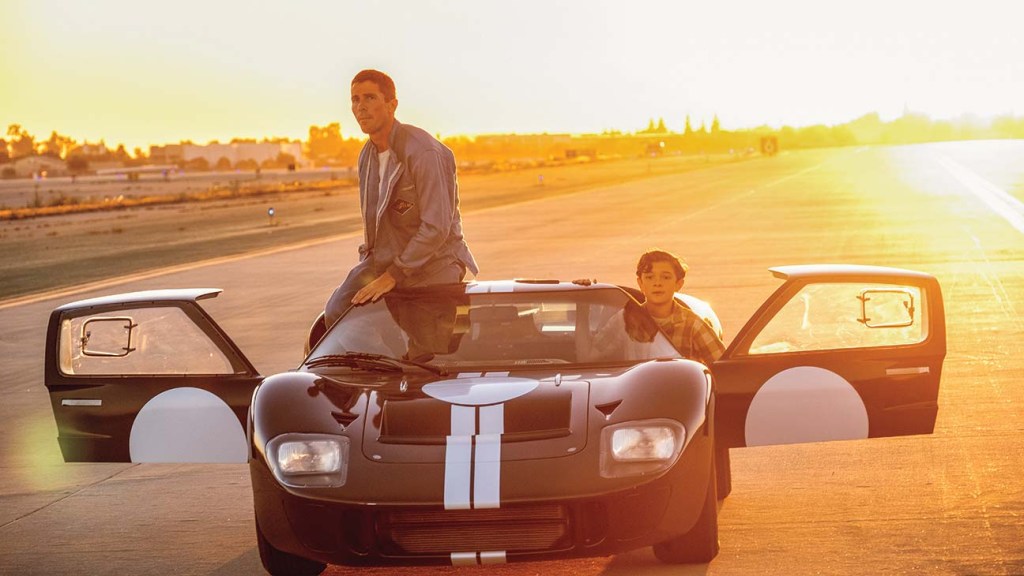 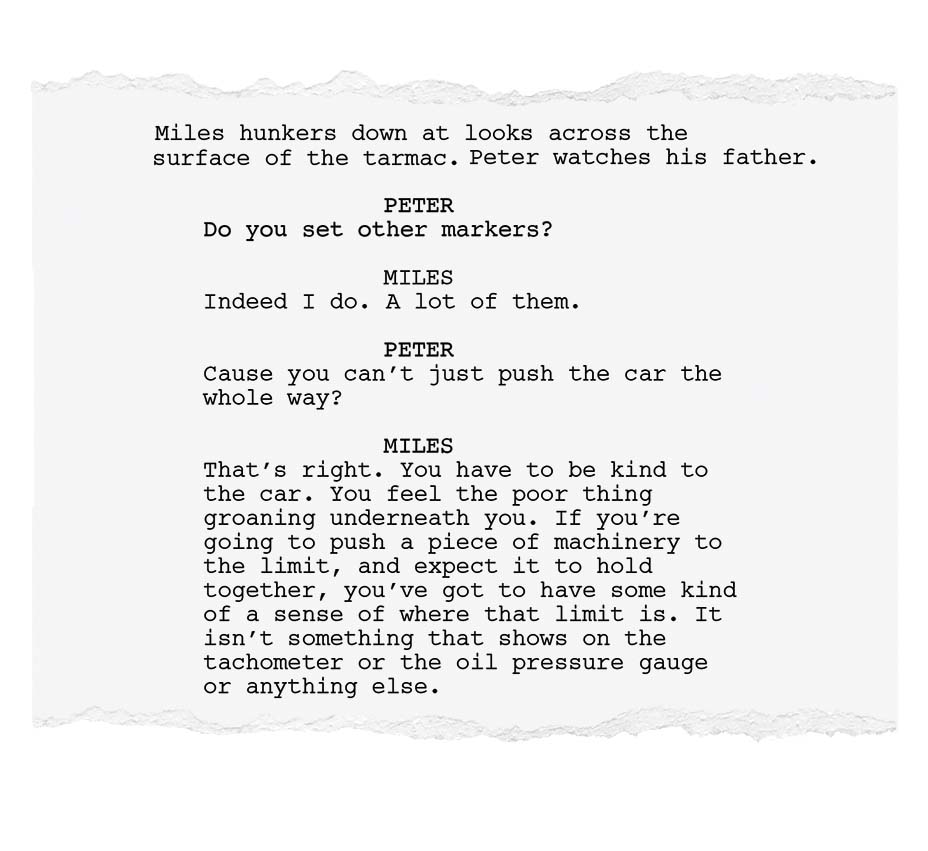 And when Keller got his first job at 14, working at the Indy 500, it was his father who dropped him off at the track every day.

“A son can want to follow in their father’s footsteps because he wants to be like his father,” says Keller, “or a son turns and runs the other direction and wants to be the antithesis of his father. Either way, a son is forged by his father.” 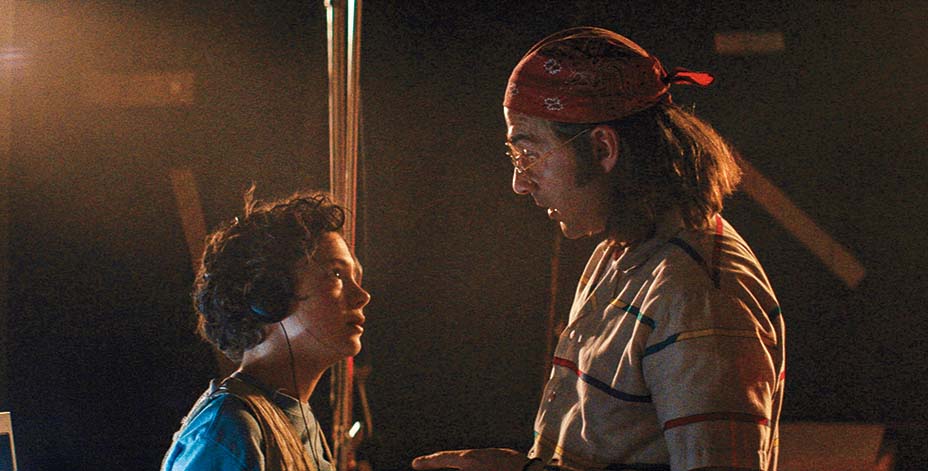