Flattery certainly works, but mockery can sometimes result in even more attention at the box office.

Witness Illumination’s latest CG-animated pic, The Grinch. When it came time to craft its marketing campaign, Universal faced several key hurdles, including convincing consumers why they should want to see a Christmas-themed movie based on the oft-told classic Dr. Seuss tale in early November.

So a key component of Universal’s campaign for the movie, which debuted to a rousing $66 million over the Nov. 9-11 weekend, became a snarky billboard campaign tailored for individual locales and designed to separate The Grinch from other fall offerings, while provoking a flurry of commentary on social media, particularly among younger adults — who are hardly the usual target demo for an animated family film.

The gambit seems to have worked: 18 percent of ticket buyers on opening weekend were between the ages of 18-24, compared with 12 percent for Illumination’s last animated feature, Despicable Me 3, which debuted in summer 2018.

“Good luck getting those Hamilton tickets,” read a digital billboard for The Grinch in New York’s Times Square. “Keep honking. It will make everything go faster,” read another NYC billboard, while subway signage included the slogan, “I’m sure you’ll catch the next one.” In Los Angeles, a billboard perched above the congested Highland and Franklin intersection quipped, “I love it when this light turns green and nobody moves.” Other L.A. taglines included, “Oh, you’re trying to make it in Hollywood? Let me know how it goes.”

Bay Area residents in Northern California were treated to such Grinch billboards as, “rent is so cheap here,” “cool app idea dude” and “I was told this billboard would be San Francisco-adjacent.” 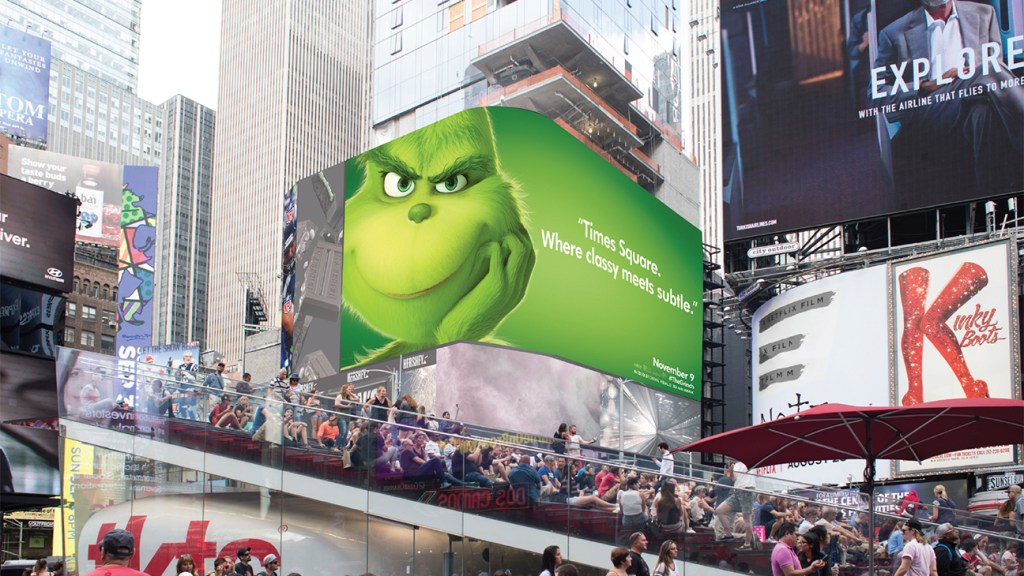 Consistently clogged traffic also met with a billboard on the Long Island Expressway reading, “I could watch you crawl down the LIE all day.” Weather was another go-to topic, such as this Chicago billboard, “I’ve seen windier cities.”

Customized, localized campaigns are costly and time-consuming, since they have to be tailored for numerous cities, says Michael Moses, Universal’s president of worldwide marketing.

While The Grinch isn’t the first movie to go for a customized campaign, such efforts are infrequent. In 2008, Universal crafted a localized marketing campaign for the R-rated comedy, Forgetting Sarah Marshall. A year later, Sony’s marketing team, then led by Marc Weinstock, was lauded for its unique, targeted campaign for District 9.

“It doesn’t happen all the time because it is a lot of work, and it is hard to come up with that many variations,” says Moses. In the case of The Grinch, the campaign was spearheaded by senior vp advertising Joe Wees and director of creative advertising Chandler Chow.

Hollywood studios are all too eager to reboot long-dormant franchises. The Grinch is the second big-screen adaptation of Dr. Seuss holiday tale after Ron Howard’s 2000 film, starring Jim Carrey. This time, the grumpy creature is voiced by Benedict Cumberbatch. And both feature versions follow in the wake of the 1966 TV version, How the Grinch Stole Christmas!, voiced by Boris Karloff.

“The billboards really did move the needle. You always hope for things to go viral and it happened. So many people posted pictures,” says Moses. “It’s still a kids movie, but it is also trying to be grown-up.” 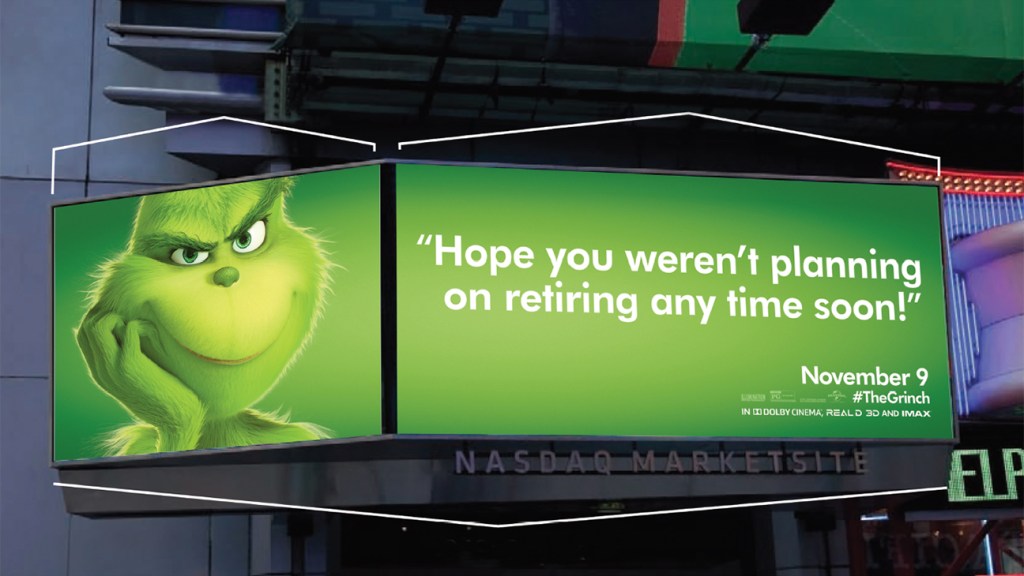