To play Amphibian Man in Guillermo del Toro’s The Shape of Water, actor Doug Jones endured 65 shooting days of indignities. He spent endless hours soaking in an ice-cold water tank. He squatted on his haunches, his neck chained to a concrete block, while being cattle-prodded by a sadistic government agent (played by Michael Shannon). He wore a fish-man costume and headpiece that were so heavy they required four crewmen to hoist them onto him.

But for Jones, 53, the most brutal scene was the one del Toro shot in black-and-white while a 20-piece orchestra played waltz music on the soundstage. “I had to dance,” he says. “And I’m not a dancer.”

Over his two-decade career, del Toro has blended many genres. But planting a Fred Astaire-Ginger Rogers-style dream sequence into the middle of his Cold War-era sci-fi romance about a mute cleaning lady (Sally Hawkins) in a secret research facility who develops a crush on a captured fish-man creature is a stretch even for the Mexican auteur behind Pan’s Labyrinth.

As it turns out, del Toro had been storyboarding something like this sequence — and imagining the movie around it — since he was 7 years old. That’s when he first saw Creature From the Black Lagoon, the horror movie about a gilled man captured by scientists in the Amazonian jungle.

“The creature was the most beautiful design I’d ever seen,” he recalls. “And I saw him swimming under [actress] Julie Adams, and I loved that the creature was in love with her, and I felt an almost existential desire for them to end up together. Of course, it didn’t happen.” So young del Toro made it happen, sketching the fish-man and his love interest over and over again. “I had them eating ice cream, on a double bicycle, having dinner,” he says.

Once he grew up and became a filmmaker, del Toro tried on several occasions to make his own version of Black Lagoon, with a love story at its center, but he kept coming up against the limits of his imagination — as well as the movie rights.

Then in 2011, when del Toro was having breakfast with Daniel Kraus, the co-writer of his DreamWorks TV series Trollhunters, the director asked what he was working on, and Kraus replied that he was toying with an idea about a janitor who discovers a creature in a secret government facility and takes it home.

“I thought, ‘That’s the road!'” says del Toro. “I said, ‘Can I buy that idea from you? Can I literally buy that paragraph?’ And I made a deal to buy the idea and started working on the screenplay.” 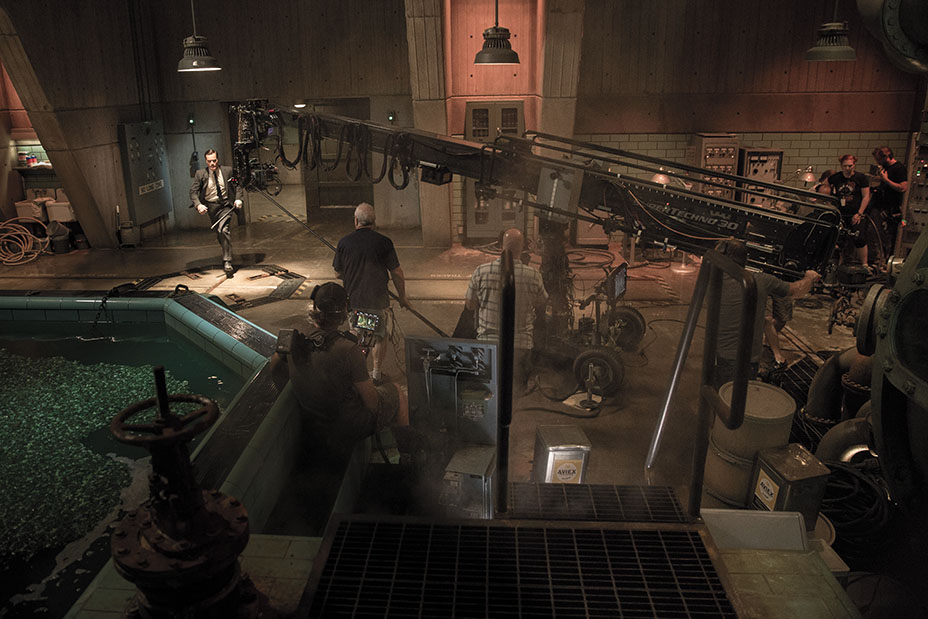 Del Toro brought in another writer, Vanessa Taylor, to help. But the biggest challenge wasn’t the script — it was coming up with the right monster design. “It’s not the creature [from Black Lagoon],” he says. “I don’t think that creature is designed in a way that he can be a romantic lead. It’s beautiful, but it’s not a romantic lead.”

One of the first people hired was Mike Hill, a sculptor del Toro had once commissioned to make a life-size Frankenstein monster for his private collection of horror memorabilia. Del Toro gave Hill one marching order: “I need you to give it a soul.” Hill began reworking previous designs, starting with the mouth. “The [design] before that had a fish mouth,” he says. “And who’d want to kiss that?”

Once the script was done and the creature design underway — del Toro sank $200,000 of his own money into its development — he started shopping Shape around. His first, and it turned out only, stop was Fox Searchlight. “I walked them through it,” del Toro says. “I read them [parts of it] and showed all the drawings and the models. And what gave me courage [was that] at the end of the pitch, everybody was crying. I thought, ‘Oh, I have something.'”

At first, del Toro wanted to shoot the film entirely in black-and-white. Then he faced the realities of industry economics: “Searchlight said, ‘Well, if you want it in black-and-white, the budget is $16.5 million,'” he remembers. “Then I asked them: ‘How much if it is in color?’ And they said $19.5 million. And I said, ‘Color it is.'” (The film came in $100,000 under budget.)

With that settled, del Toro assembled his cast: Hawkins, Shannon, Octavia Spencer as the cleaning lady’s best friend and Richard Jenkins as her gay neighbor. Arguably the most important part, though, went to the least famous actor. Jones, who has worked with del Toro for 20 years, starting with a non­human role in 1997’s Mimic, was chosen to wear the fish-man costume. “A lot of people can perform under makeup or suits,” says the director, “but very few are actors. Doug is an actor.”

Jones recalls del Toro gave him one bit of direction before they started production: “He said, ‘I want you to channel two things: the Silver Surfer [the Marvel Comics hero], with his heroic strength and his understated sexiness, and a matador. When you watch them, they are very confident and lead with the hips and pelvis.'” 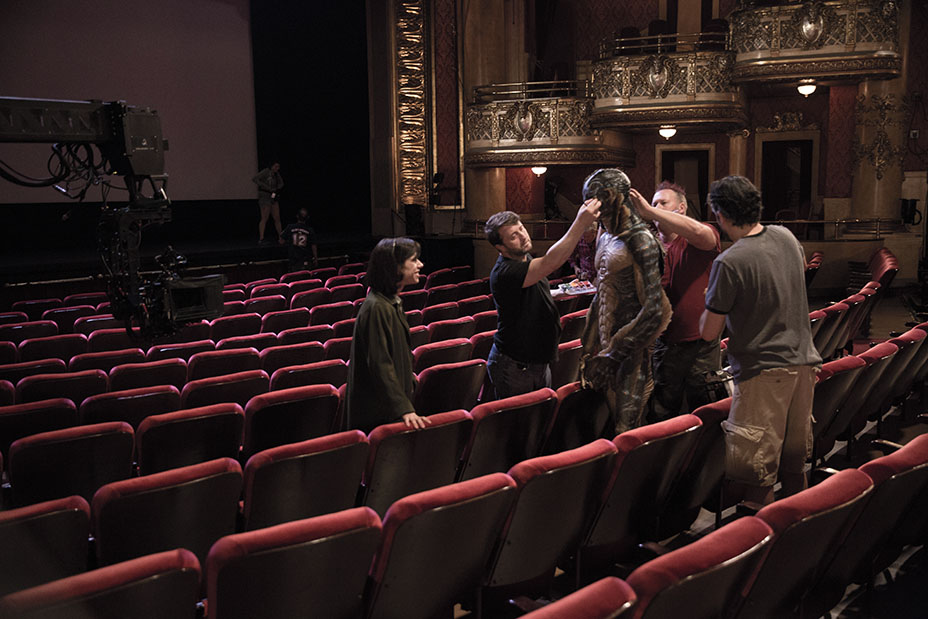 The shoot got underway in Toronto in August 2016.

“Everything went wrong,” says del Toro. “We had accidents. A stuntman crashed the Cadillac; his foot slid and hit the gas instead of the brake and it crashed against a camera. We had only one car. We didn’t have the money for two. So we had to reschedule, and then nothing fell into place.”

The weather didn’t help. “We had subzero temperatures during the rain scenes and high-velocity winds at the same time, so there were takes where the rain was running horizontally, and they weren’t usable because it looked silly,” he continues. “When we were shooting in a sandpit, a scene with Russian spies, we had hurricane-size winds. The sand would get into lenses, it would get into the clothes, it would get into your teeth, your eyes, your ears. We had 64 days of bad news.”

One day of good news, though, occurred when shooting the Fred Astaire dream sequence, in which Hawkins’ cleaning lady imagines twirling in a ballroom with the fish-man. Jones and Hawkins spent three weeks rehearsing under the tutelage of choreographer Roberto Campanella. When the day came, the actors could tell del Toro was apprehensive about the scene. “He told us it was a once-in-a-lifetime opportunity and to just have fun,” recalls Jones. “But the look on his face said, ‘Do you believe this?! Do you believe we’re actually doing this?'” 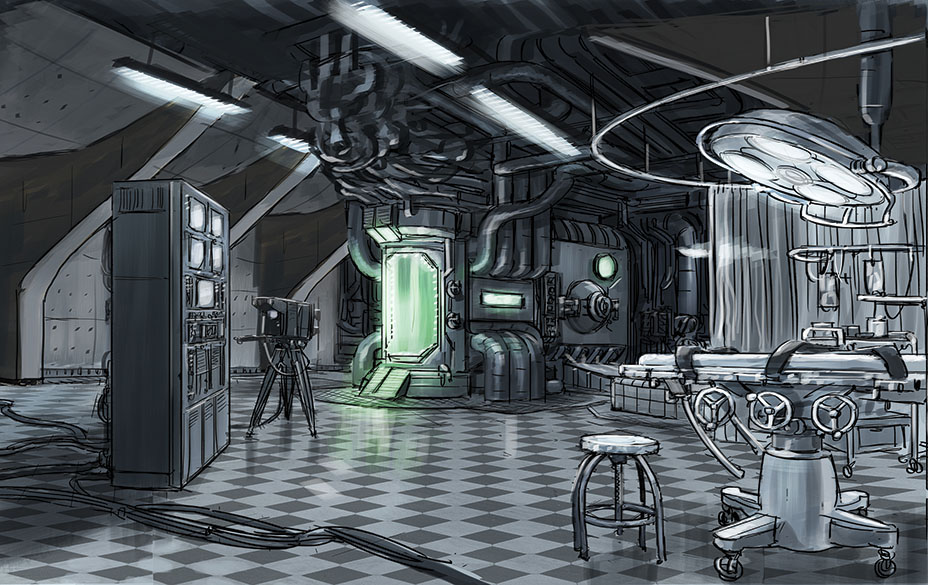