Continue to The Hollywood Reporter SKIP AD
You will be redirected back to your article in seconds
Skip to main content
August 6, 2019 7:30am

In an era when TV’s top series are set in a diverse array of eras, it’s no longer enough to pull out a crimper and some blue eye shadow and call it the ’80s. With high-definition and cinema-quality production values now the prevailing TV standards, Emmy-caliber hair and makeup teams are crafting cosmetic color palettes and meticulously coiffed dos to perfectly reflect whatever period a show’s characters inhabit.

GLOW’s makeup department head, Lana Horochowski, is a self-proclaimed “child of the ’80s” who leaned hard into the show’s era and its famously over-the-top aesthetic — given even more extreme license thanks to the world of wrestling. “It’s so rare in our career that we get to play with so much color,” she says. “On a regular television show, everybody just wants to be minimal makeup … But the ’80s, it was just anything goes. The more colors you can fit onto your eye, the better. The brighter, the better. The more neon, the better. It’s a makeup artist’s dream — and also a girly girl dream!”

Horochowski says she even tries to use cosmetic products of the era whenever she can. “We always do our best to try to be as authentic as possible — and you’d be surprised that some stuff is still actually available,” she says.

The show’s hair department head Theraesa Rivers follows a similar approach when crafting — through “teasing, a lot of hair spray and patience” — the voluminous, sky-high styles the ’80s were known for. “We really don’t stock the trailer with things that are used today, so we basically just use hair spray and mousse and gel,” she says. “We stay away from the modern products and just pick the basic products that were used in the ’80s.”

Creating practical takes on the ’80s dos, says Rivers, “can be kind of challenging, because people just don’t have those types of haircuts and frizzy hair for the longest time. To get different looks on the show, we had to perm people’s hair, do extensions, or do actual asymmetrical cuts on the actors.”

Chernobyl hair and makeup designer Daniel Parker provided a dramatically different take on the era’s aesthetic, filtered through the lens of Soviet Russia. “You’re talking 1986 in the USSR, so you have to look at what they actually had available, as far as makeup and hair products are concerned, which was extremely little. It’s very much a question of getting it right for the period, looking into the hall of records and just making sure that everybody was absolutely, 100 percent correct to the period, without them looking plastic, without them looking fake. They had to look kind of relaxed and real.”

Parker was pleased to achieve a very authentic feel, thanks largely to research and the inside knowledge of his crew, assembled in Chernobyl’s Lithuanian and Ukrainian locations (“They lived through this, so they knew”). “There is the evacuation scene in Pripyat, and I just thought, ‘Jesus, those extras — it looks like a documentary!’ I was so happy to see them looking so right, and yet the subtleties of them looking right were so difficult to achieve.”

Debbie Zoller, the head makeup artist for Fosse/Verdon, faced a more expansive challenge spanning decades through Hollywood and Broadway. “I had to deal with basically five decades, and not only aging our two leads, but also having to re-create all the iconic dance numbers, that even though it was in the ’70s, the looks were actually 1930s,” she recalls. “It was a huge puzzle to put together. And the more research I did, the more information I found out, and it just kept getting bigger and bigger and bigger.”

Fortunately, she had a hefty cosmetic arsenal to draw from. “Everything that I had done prior to was just setting me up to do this project,” Zoller says. “I have luckily researched foundations and powders and colors for each period, so I was able to create a palette for each period, each decade.”

Fosse/Verdon’s hair department head Christopher Fuller established a strong divide between Bob Fosse and Gwen Verdon’s theatrical and personal worlds. “My main goal for our look on the show was when everything was onstage, everything could be very glamorous and glitzy,” he says. “But behind the stage, I wanted the lived-in period to look real. You could really delineate the show stuff from the everyday stuff.” 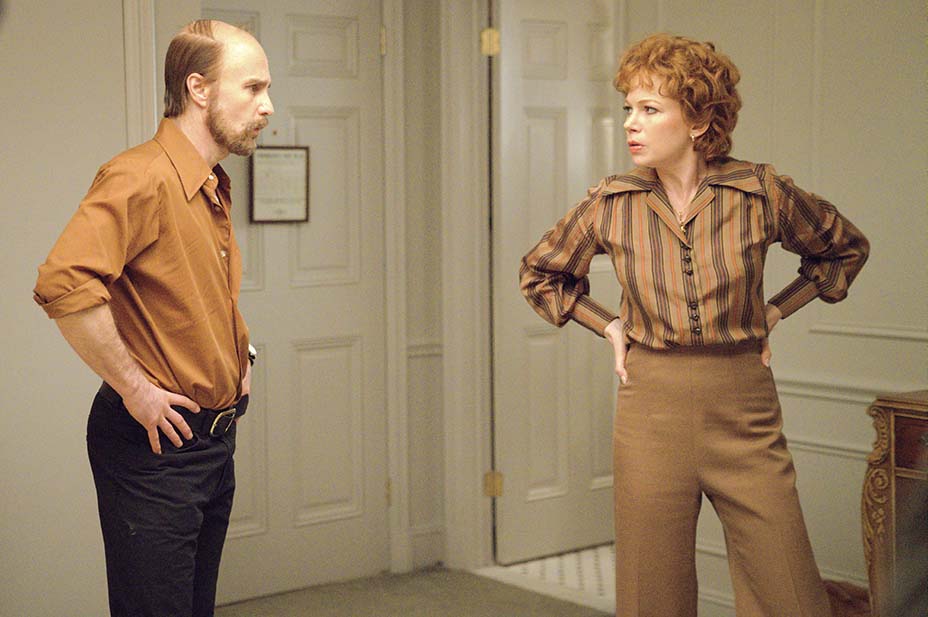 Of the series’ celebrity re-creations, Fuller says, “We just really wanted to blow the audience away: When you saw Liza Minnelli, we wanted to feel, ‘Oh my God. It looks like Liza!’ ” No one was more committed than lead Sam Rockwell, he adds. “Sam is one of the best sports I’ve ever worked with. Sam wore four different wigs in the show, and he let me shave his head every single day. He just wanted to be the part so badly.”

Achieving the perfect late-1950s aesthetic of The Marvelous Mrs. Maisel is an intensely collaborative effort that includes working in concert with the set design and wardrobe teams, says makeup department head Patricia Regan. “The women just were really groomed and put together at that time,” she says. “It goes into all details: shoes, gloves, hats, purses. Everything plays into our color scheme. That’s the most exciting thing, and at the same time it was challenging, because we’re trying to find the colors that are correct to the period that are not necessarily available.” 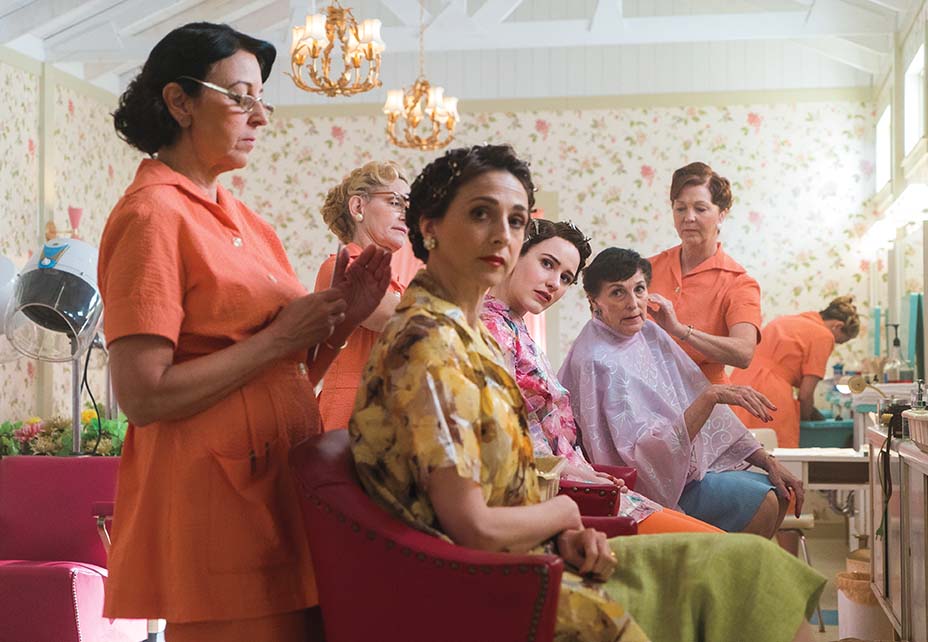 Regan frequently pores over publications of the period for inspiration. “A lot of magazines — Life magazine always had a debutante page where you could see a look that you could put together. And catalogs — they used to do these really wonderful catalogs to sell clothing and accessories.” She shares her finds with hair department head Jerry DeCarlo, assembling libraries of looks. “Someday I think we’ll pass on these libraries to the next generation.”

A unique challenge faced American Horror Story: Apocalypse makeup designer Eryn Krueger Mekash. “When I met with Ryan [Murphy], he told me that it was going to be set like 18 months post-apocalypse, and that he was going to go with this Victorian theme meets some kind of unusual look.” 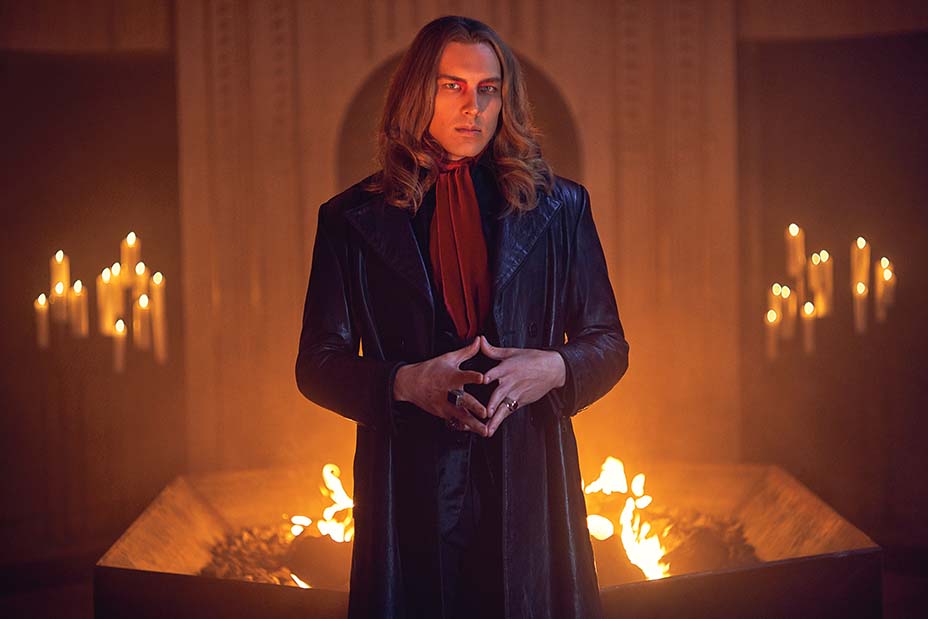 Mekash added an ’80s edge to the mashup style, with linear lines and “some kind of purple vibe to [every] look, whether it was in their lipstick, eye shadow or blush,” while Cody Fern’s Antichrist character adopted red eye shadow — a futuristic look that has started to emerge in the real-world present.

“Now I’m seeing people doing that, and that’s really fun,” says Mekash. “Cody and I had a great time coming up with that look, but seeing it on other people is so cool. To have people inspired by something you do is just the absolute biggest compliment.”

'This Is Us' to 'True Detective': How Makeup and Hair Pros Add (or Take Away) Years From Stars