The Handmaid’s Tale traveled to Toronto to stage its muted, fictional Gilead — an autocratic Boston that’s more colonial than contemporary Beantown. “There was a lot of pressure to figure out how to do [the book] justice,” says director Reed Morano, who was charged with establishing the show’s aesthetic in its first three episodes. “Margaret [Atwood] is such an intellectual. We thought if we took risks the way she does, maybe we’d come close.”

Under the direction of Morano — who worked as a cinematographer before helming her first feature, 2015’s Meadowland — cinematographer Colin Watkinson did his part by shooting scenes in “Kubrick-esque, formal tableau-type frames,” while familiar flashbacks to a country falling to fundamentalists were more verite. “Then we got in and had a flashback within a flashback, and it was like, ‘How do we deal with that?’ ” he recalls. “Just the colors alone would tell us where we were.”

Costume designer Ane Crabtree followed the novel’s lead, emphasizing Gilead’s caste system by color-coding the women’s uniforms (though her palette diverges slightly from Atwood’s). The titular handmaids’ oversized white bonnets, with wings to prevent direct interaction with others, cast a serendipitous soft glow on their makeup-free faces. “I liken it to being imprisoned, literally and certainly physically, but it’s utilized as a tool for intimacy,” says Crabtree. “I know [the actors] could not hear as well either, so that space of sound completely changed for them.”

For Morano, the show’s unreal aesthetic is meant to evoke very real contemporary struggles. “I just wanted to raise awareness about how women are treated in other parts of the world,” she says. “Everything [Atwood] put into The Handmaid’s Tale has happened or is happening in another country in the world.” 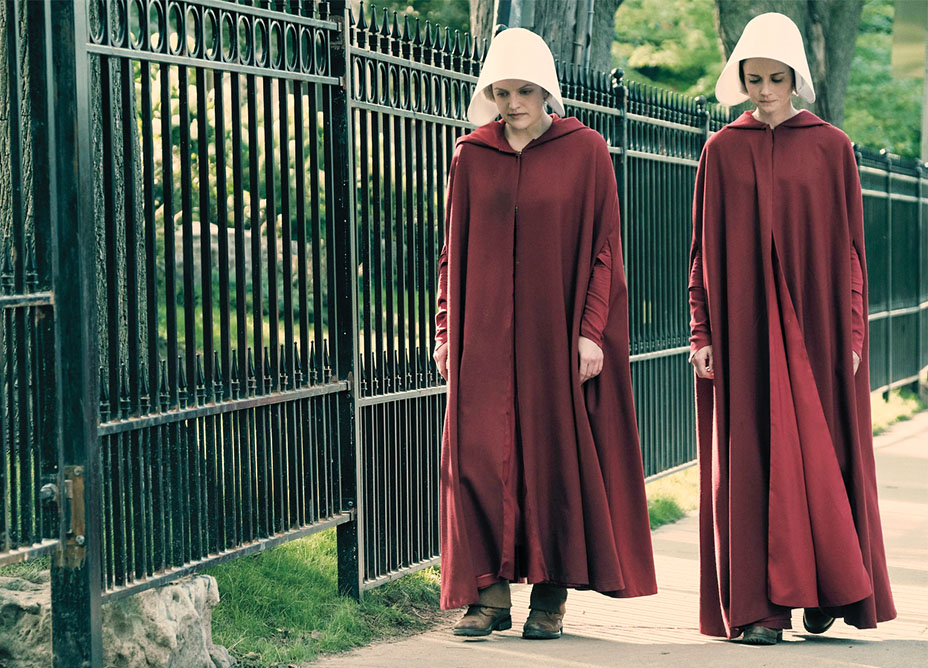