In January 2017, Tom Ajamie sat in a luxury hotel suite at Main & Sky in Park City when Harvey Weinstein came bounding in for an awkward face-to-face meeting. The Houston-based financial fraud attorney had been hired by the amfAR board to investigate a suspect transaction involving Weinstein. Ajamie had recently submitted his eight-page confidential report, the details of which Weinstein appeared to know well. But as the two-hour meeting kicked off, the Oscar-winning producer was focused on a different subject entirely.

“He began screaming at me, ‘You’re telling everyone I rape women. You’re causing problems for me. I have a very good reputation. And you’re the source of all these rumors’,” Ajamie recalls. “Harvey was manic. One minute he’d be yelling, and then he would calm down. He was all over the place. Yelling, screaming, cajoling, begging, trying to explain, often talking in circles, confused, not confused, justifying his actions — ‘I slept with dozens and dozens of women, and you know they all won Academy Awards’.”

Fast-forward three years, and Weinstein is now a convicted rapist and has been bouncing around New York correctional facilities amid health issues. Although Ajamie’s amfAR investigation never received the same level of attention as Weinstein’s sexual predation, it remains the key event that led to his downfall. After all, it was during the eight-month inquiry, which Ajamie’s firm did pro bono, that he learned of Weinstein’s open secret.

“Everyone I interviewed started off by saying things like, ‘You know he’s a sexual predator, right?’ as opposed to jumping right to this issue of financial transactions,” Ajamie says. “As a lawyer who’s done dozens of these investigations, it was very odd.”

At Main & Sky, he faced off with Weinstein — Ajamie, the Hollywood outsider, was unimpressed with the mogul’s name-dropping. (Weinstein was in Sundance with Jay-Z for the premiere of their TV series Time: The Kalief Browder Story, and days earlier, it was reported that Malia Obama would intern for him.) Attorney Lisa Bloom, who arranged the meeting, was the only other person present.

Near the end of the meeting, Weinstein leaned close to Ajamie and told him to sign an NDA. “He said, ‘David Boies wants you to sign this nondisclosure. You have to keep everything you learned about me secret,’ ” recalls Ajamie.

He refused. Soon after, he was contacted by New York Times writers Jodi Kantor and Megan Twohey. “I told them what I was able to tell them,” he says. The rest is history. 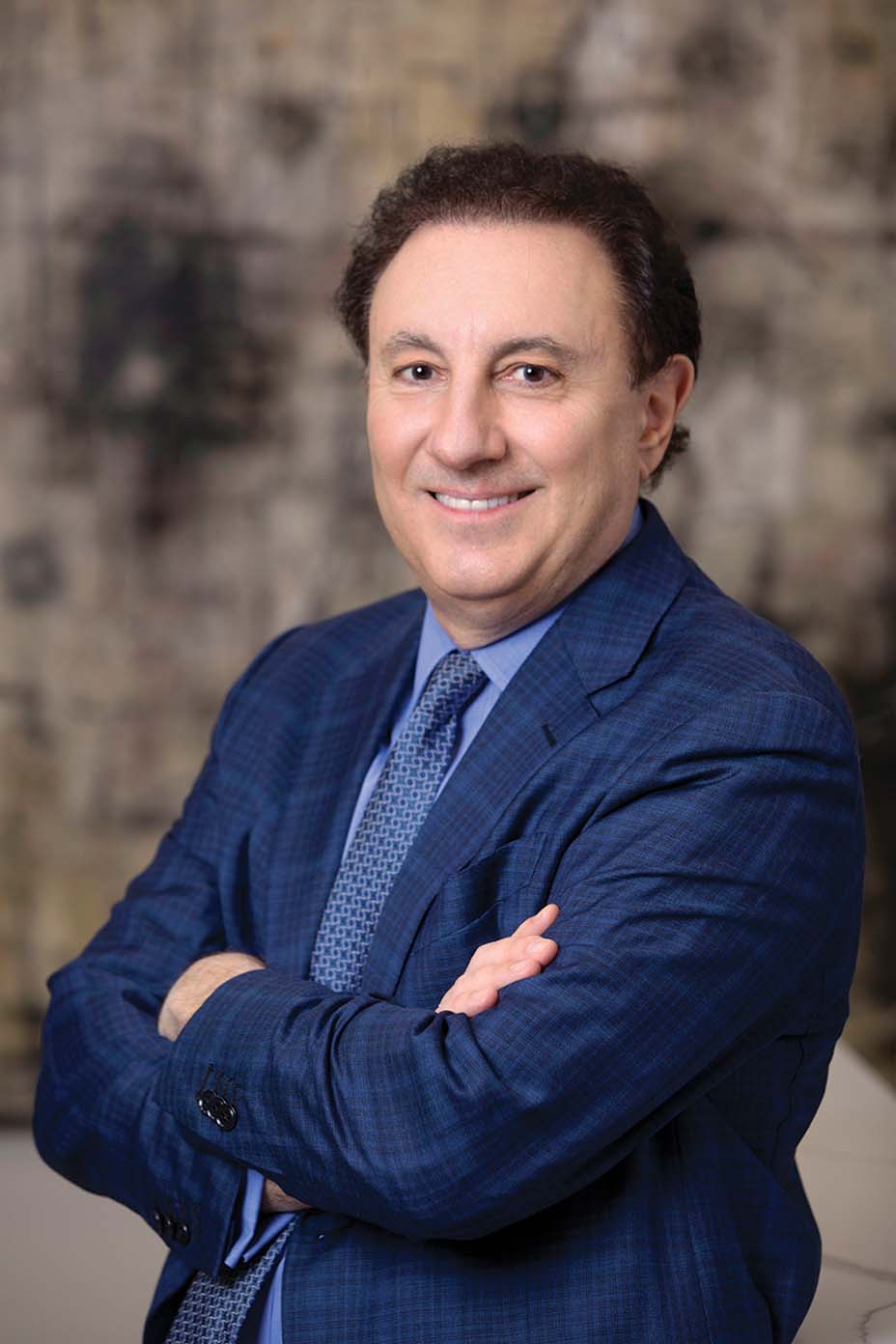 On a cold February day in Manhattan, the maitre d’ at Fleming greets Ajamie by name. The 59-year-old lawyer splits his time between Houston and New York. Days earlier, he won a $79 million class-action settlement against Wells Fargo on behalf of former financial advisers who said they were forced to forfeit deferred compensation when they left the company. Though he rarely intersects with Hollywood, Ajamie says power lawyer Howard Weitzman served as a mentor. They first met in the early ’90s in a case against Time Warner. Ajamie was a young litigator who wanted to learn the art of trying a case.

“We were co-counsel and have been friends ever since,” says Weitzman. “Tom was young, smart, a willing student and had great energy. He became a dynamic and successful trial lawyer. But more importantly, he has integrity, and it came as no surprise to me that his amfAR investigation ultimately exposed Harvey Weinstein.”

Ajamie has also represented the band Duran Duran for the past six years.

“If you have a complex problem to solve, Tom has a great instinct and acts with laser precision,” says the band’s Nick Rhodes. “He’s an inspired conversationalist and we have laughed endlessly together. I know it doesn’t sound as though I am describing one of the toughest litigators out there, but he truly does have a wonderfully balanced view of the bizarre world we live in.”

Having won more than $1 billion in awards and settlements, his practice is booming. But Ajamie is passionate about donating his time in the nonprofit sector, as he has done with the Sundance Institute for some 15 years and with amfAR since March 2016.

As he dug into Weinstein’s activities, he discovered that at the 2015 amfAR benefit in Cannes, Weinstein struck a deal with then-chairman Kenneth Cole in which Weinstein would auction off two items on the condition that the money be split, with $600,000 going to the American Repertory Theater. Separately, ART promised to reimburse Weinstein for staging the producer’s for-profit play Finding Neverland so long as third parties donated $600,000 to the theater by June 1 of that year. The auction items fetched far less than $1.2 million, but Weinstein still pushed amfAR to wire $600,000 to ART by June 1, even though amfAR had not yet received the donations. Cole acquiesced, to the horror of other board members, some of whom stepped down.

In fall of 2016, Ajamie submitted his report to the board. Some sent it to reporters and the New York attorney general, while at least one other gave it to Weinstein, who already was working with Bloom, both as her client and on a Trayvon Martin project based on her book Suspicion Nation. But Ajamie had no knowledge of that relationship when Bloom — whom he had met only months before, while investigating Weinstein — suggested the three meet in Sundance. Per Ajamie, who travels to the fest annually, Bloom said she bumped into Weinstein at the Kalief Browder premiere party, Ajamie’s name came up, and Weinstein asked for a meeting.

“The clear impression she gave to me was she didn’t know him,” he says. “At this point I’m still thinking she’s a hardcore women’s rights advocate.”

Around the same time as that Main & Sky meeting, Cole began agitating for a new investigation into the transaction and hired Gibson Dunn & Crutcher. Unlike Ajamie’s firm, which did $2 million worth of work basically for free (it collected about $40,000 to cover expenses), Gibson Dunn was charging. After a $1 million investigation (the bill was later reduced to $450,000), the firm found the transaction was acceptable.

“It is blatantly wrong,” Ajamie says. “They looked at the issue very narrowly. There’s no way that money raised in a fundraiser for AIDS research is ethical or legal to cast through several entities and give it back to Harvey.” (A Gibson Dunn rep says, “After a thorough review, we concluded and reported to the board that this contribution was a lawful charitable donation to ART.”)

On Feb. 7, 2017, Gibson Dunn shot off an email to Ajamie that said: “We demand that you immediately cease and desist from communication with any and all third parties and individual amfAR board members about any issues you ‘investigated’ since March 2016, including but not limited to any issues regarding Mr. Weinstein.” (An amfAR board member tells THR it declined to sign a similar NDA.)

But the genie was out of the bottle. And perhaps it was only fitting that the subject of Twohey’s first story on Weinstein — published 12 days before the jaw-dropping Oct. 5, 2017, sexual misconduct exposé she wrote with Kantor — was about the amfAR transaction.

On Feb. 24, Weinstein was convicted of third-degree rape and a first-degree criminal sexual act. Ajamie was with clients in Phoenix when the news flashed across his phone.

“I looked down, didn’t skip a beat, looked right back up and continued the meeting,” he says. “I expected a guilty verdict against Harvey Weinstein. Clearly what Harvey was accused of was exactly what I had been hearing during the course of my investigation.”

Still, the question looms: If Weinstein hadn’t been greedy and didn’t push to be reimbursed the $600,000 from ART, would he be a free man?

“I don’t know,” Ajamie says after some thought. “For the first time that I’m aware of, someone stood up and challenged him aggressively, me and my legal team. We raised a lot of issues — suspicious, sleazy, unethical behavior — and wrote it up. Everyone else kind of swept it under the rug.”

A version of this story first appeared in the March 26 issue of The Hollywood Reporter magazine. Click here to subscribe.