The past five years, I’ve studied the assistants who run the schedules of the most powerful people in Hollywood. As a screenwriter and community organizer, I started a nonprofit impact agency called Young Entertainment Activists (YEA!), where a lot of times my work is life-coaching entertainment assistants who are struggling financially, socially and existentially.

Changing the status quo of unlivable pay is one facet of #PayUpHollywood, which began as a hashtag in mid-October and now has become a budding movement that’s not just about the money. We seek to upheave many other unreasonable standards in the industry that contribute to the systemic mistreatment of young Hollywood.

The first is overwhelming hours. When I started my career at one of the top four agencies — a step that is considered the grad school of Hollywood and a requirement of most next-level assistant positions — I worked 11- to 12-hour days for $13.50 an hour before taxes. Add on a 40- to 60-minute commute to live in an affordable shared room, factoring in almost two extra hours to my workday, and that’s a 60-hour week. Consider my colleagues who spent an extra 10 to 20 hours working supplemental jobs on the weekend; that’s about 80 hours.

Another expectation of making it in Hollywood is networking. How else are we going to escape agency life and move up? During my assistant years, I spent an average of eight hours a week having drinks and coffee (costing $40 to $50) with other industry professionals outside of my full-time job.

For professionals seeking to break into creative roles, it’s also expected that we hone our craft one to two hours every day. At the agency, I’d spend my 30-minute lunch breaks hiding in an empty conference room to work on my scripts. In 2019, the unrealistic expectations of young Hollywood aren’t just that we survive on wages well below the cost of living in Los Angeles. We must juggle a full-time day job, potentially a supplemental job, eight hours of networking and seven to 14 hours of creation. That’s nearly 100 hours a week devoted to career.

The incentive used to be that we’d climb the ladder, become successful and never have to make another coffee run again. But Hollywood has transformed in the past five years, let alone 10 to 20. There are now smaller budgets, mass firings and our bosses’ (and our own) growing global anxiety, all of which we have to deal with. Assistants are buried in this toxic, exhausting work culture until those of us who can afford to move up five to eight years later finally do. By then, these bad habits, the “pay your dues” mentality, are so ingrained that we end up perpetuating what was inflicted on us.

On top of paying assistants fair wages, bosses need to adopt a transparent process that starts from the initial interview.

Reading or watching our creative material should be part of the process when interviewing for a showrunner, writer, producer, director or even development desk that could turn into a producing role (even agents’ desks because, come on, we know not everyone who joins the mailroom wants to be an agent. Why are we still pretending?).

Once we get hired, bosses need to know what their assistants are making. Period. Talking about money isn’t “personal,” it’s a means of survival in this overpriced city. Yes, this might take an extra five minutes out of a busy executive’s day; however, when assistants are energized about their job instead of anxious to confront their boss, they are 100 times more productive — ultimately saving time for everyone.

Lastly, mentor us! It’ll just increase productivity. If a boss mentors their assistant, that person will actually want to work harder. This could take the form of monthly check-ins — five minutes out of one day during the entire month that can have a lasting impact. It would provide a routine deadline and an incentive to do well for our boss while simultaneously advancing toward our own professional goals.

On top of paying assistants a livable wage, adding this transparency and goodwill into their workflow could, in the next 10 years, completely change the culture of Hollywood — and as changes in Hollywood seem to have a ripple effect, the work cultures of industries across the nation. We’re not just asking Hollywood to pay up. We’re asking it to pay it forward. 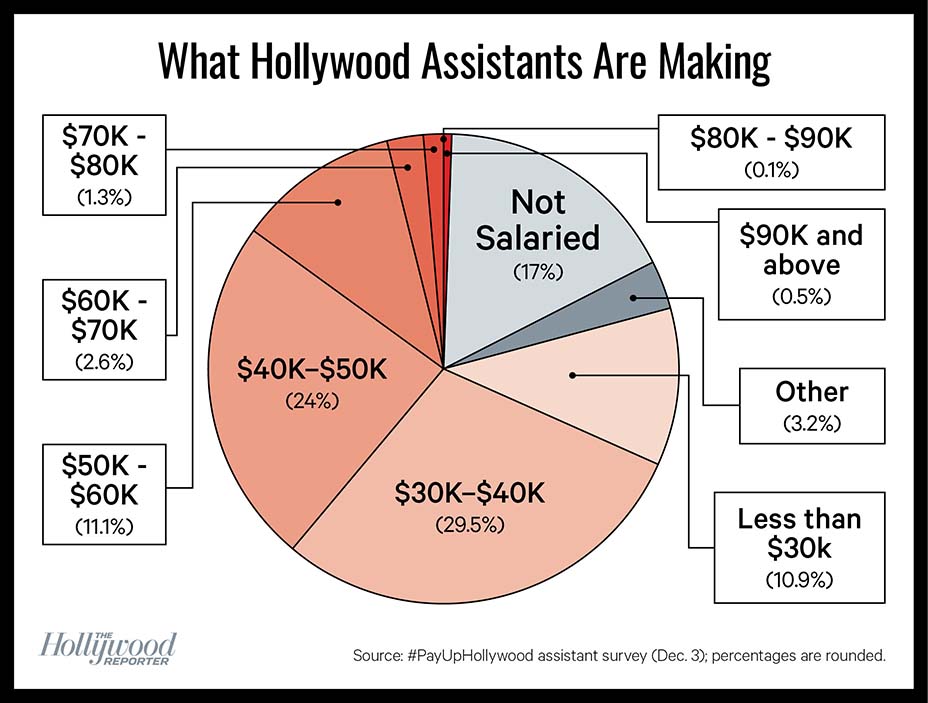