“Africa really is one of the most beautiful places I’ve ever seen,” says Emmy Rossum. The star, who visited Rwanda and Tanzania on her 2017 honeymoon with Homecoming creator Sam Esmail, says, “I don’t think you know what the sky actually looks like until you see it in Africa.”

Just in the past year, Kanye West recorded in a studio built at Uganda’s Chobe Safari Lodge in Murchison Falls National Park alongside the elephant-frequented Nile River (from $397 a night; chobelodgeuganda.com); Danai Gurira highlighted anti-poaching efforts in Zimbabwe with nonprofit WildAid; and luxury operator andBeyond debuted a 10-day, $17,750 Kings of the Jungle itinerary for East Africa, inspired by The Lion King. Other hot destinations:

From the early ’50s, Queen Elizabeth II was an advocate for Kenya as a safe safari destination, and in 2010 her grandson Prince William to Kate Middleton there, reportedly at a secluded log cabin near Mount Kenya. The pair have also visited Cottar’s 1920s Safari Camp, a private, family-owned, 7,600-acre conservancy, where Robert Redford wrote the script for Out of Africa, and George Lucas, Keira Knightley and Don Cheadle have also stayed (from $2,554; cottars.com).

Before they wore POTUS and FLOTUS, Barack and Michelle Obama and their daughters explored the iconic, expansive Masai Mara National Reserve from an eco-friendly riverfront tent at Basecamp Masai Mara (from $375; basecampexplorer.com), where giraffe hang out mere feet away. Between game drives, they planted trees in an effort to revive the tropical forest depleted by climate change.

Campi Ya Kanzi is a luxury ecolodge with views of Mount Kilimanjaro on a private reserve in the Chyulu Hills (from $825; maasai.com), where every stay includes a $115 donation to Maasai Wilderness Conservation Trust, headed by president Edward Norton. 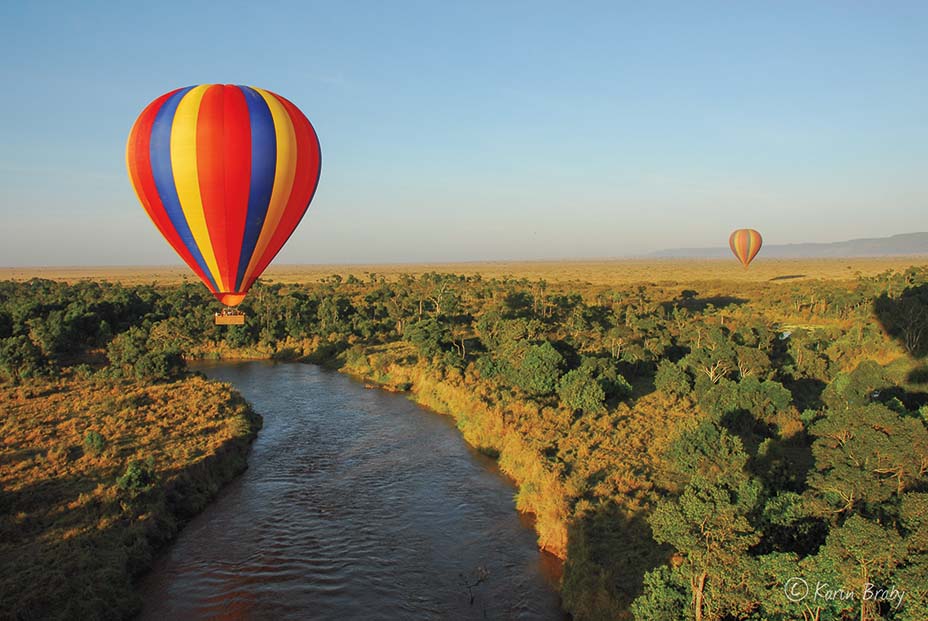 “That landscape is literally where we all come from, and those animals are of our ancestral imagination,” says the star. “Imagine if you had to point at a picture of a lion and explain to your son why that animal no longer exists.”

Says Julianne Hough, who with her ice hockey forward husband Brooks Laich booked at Angama Mara (from $1,250; angama.com), where they watched a dozen elephants taking a mud bath and hot air ballooned over plains with binoculars: “Being [in Africa] shows what life can be like, surrounded by nature, wildlife and different species of animals coexisting.”

Nikolaj Coster-Waldau and Idris Elba both recently visited Africa’s safest country, according to the World Economic Forum, while Portia de Rossi took wife DeGeneres to see endangered gorillas at Bisate Lodge, with its opulent villas inside a volcanic cone (from $1,299; wilderness-safaris.com); Harrison Ford and Calista Flockhart have also stayed at the county’s first ultra-luxurious, eco-sensitive lodge. De Rossi donated to The Dian Fossey Gorilla Fund for the TV host’s 60th birthday. “With their incredible support, we are building a permanent haven in Rwanda to continue our work to protect and study the world’s last remaining mountain gorillas and to help the people share in that forest haven,” says Fund CEO Dr. Tara Stoinski. The ecologically friendly campus is set to open in spring 2021 with labs, classrooms, a library, dorms, a conservation exhibit and an opportunity for the public to see the gorillas.

Rossum and Esmail resided in a stone banda cottage with fireplace at Virunga Lodge (from $1,000; volcanoessafaris.com). “It’s amazing to sit with the animals and watch them play, and have the teenagers come up and look at you,” says Rossum of meeting mountain gorillas in Volcanoes National Park. “They are just the most incredible beings. And with the animal noises, the way you can have a very simple exchange of information verbally with the gorilla is just completely mind-blowing and beautiful. I was in awe, humbled by their size and power.”

On the edge of Volcanoes National Park, Singita Kwitonda Lodge (from $1,495; singita.com) and the exclusive Kataza House (from $6,877) both open in August, the latter embracing local weaving and crafts.

At Akagera National Park, managed by the nonprofit African Parks (which is backed by Prince Harry), black rhinos and lions are making a comeback in the biodiverse park that welcomed its very first luxury accommodation, Magashi Camp, in May (from $470; wilderness-safaris.com). Just six breezy tented suites with elegant, Rwandan-crafted decor look out over Lake Rwanyakazinga and are a serene hub from which thrilling game drives occur.

Josh Duhamel calls visiting the Grumeti Reserve during this summer’s great migration, when millions of wildebeest, zebras and gazelles move across the Serengeti, “an experience I will never forget.”

The ultra-private Singita Grumeti Game Reserve has been a destination — created in 1994 by the government to protect the wildebeest’s migration path — for Oprah, DeGeneres and Charlize Theron. In June, the luxury operator debuted the modern Hillside Suite at Singita Sasakwa Lodge, the ultimate romantic retreat (from $4,500; singita.com) with private pool and its own safari vehicle and butler. Singita Faru Faru Lodge — where Justin Timberlake and Jessica Biel honeymooned in 2012 — was recently renovated in a Scandinavian-meets-African craft style that pairs tribal patterns with contemporary design (from $1,615; singita.com).

Harrison Ford is a veteran of Greystoke Mahale Camp (from $750, nomad-tanzania.com), while George and Amal Clooney enjoyed Mwiba Lodge (from $1,250, classic-portfolio.com). Hough and her husband visited TAASA Lodge (from $770; taasalodge.com) for an experience she calls “truly magic.”

Renowned guide Mark Thornton is launching a new five-day Great Ruaha River Walk (from $900/day; throntonsafaris.com) for rugged types — including, he says, some of his “movie business” clients over the years who truly wish to go off the grid with wild dogs, rare antelope, elephants, hippos and crocodiles on hundreds of private acres. 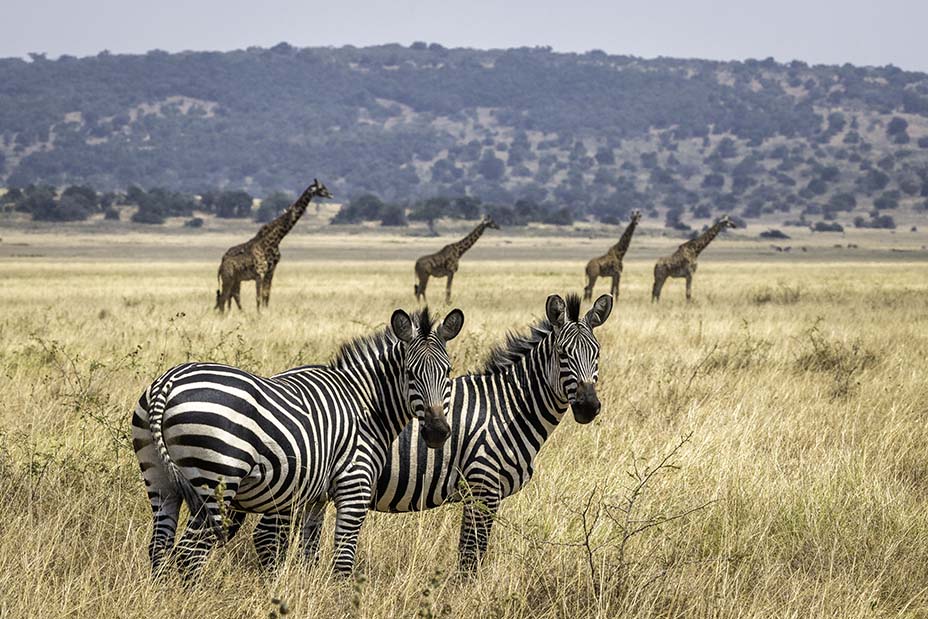 Prince Harry proposed to Meghan Markle at Meno a Kwena (from $445), where safarigoers can take nature walks with San bushmen and spot wildlife from the Boteti River. They also holidayed at the Okavango Delta’s Mapula Lodge (from $500; both at naturalselection.travel), savoring a multicourse meal under an ancient baobab tree by firelight.

The ultra-luxe six-tent Abu Camp (from $1,950; also wilderness-safaris.com), with its herd of rescued elephants, was owned by the late Paul Allen. He was known to arrive via helicopter to rest in an out-of-this-world “star bed” perched above the elephant boma and host boozy afternoon tea parties on the grassy plains.

This summer saw the introduction of two Jao Villas — and a completely rebuilt Jao Camp in the tree canopy (from $1,262; wilderness-safaris.com), and King’s Pool (from $1,262; same as above) debuted an environmentally sensitive rebuild using 100 percent solar power in the Linyati Wildlife Concession, featuring thatched roofs, woven chandeliers and handpainted murals. 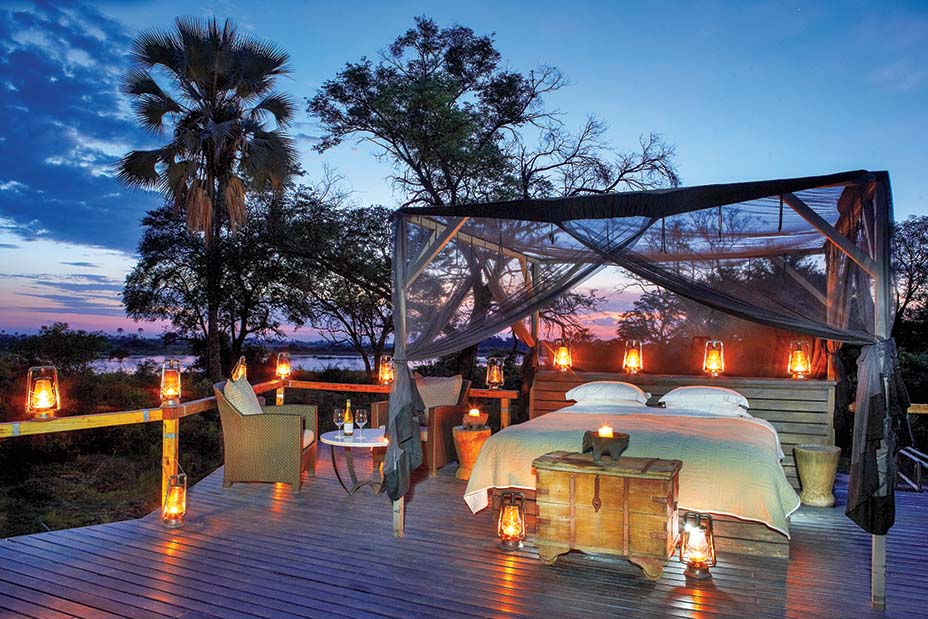 Animal lovers, take note: Botswana provides among the most upscale offerings in Africa, but has recently come under fire for lifting the ban on elephant hunting.

“The staggering beauty and extraordinary attention to detail make Royal Malewane one of my favorite places on earth,” says Elton John of the site of an “annual pilgrimage” for his family, adding that it’s “one of the only places in the world where I can truly switch off and connect with nature.” 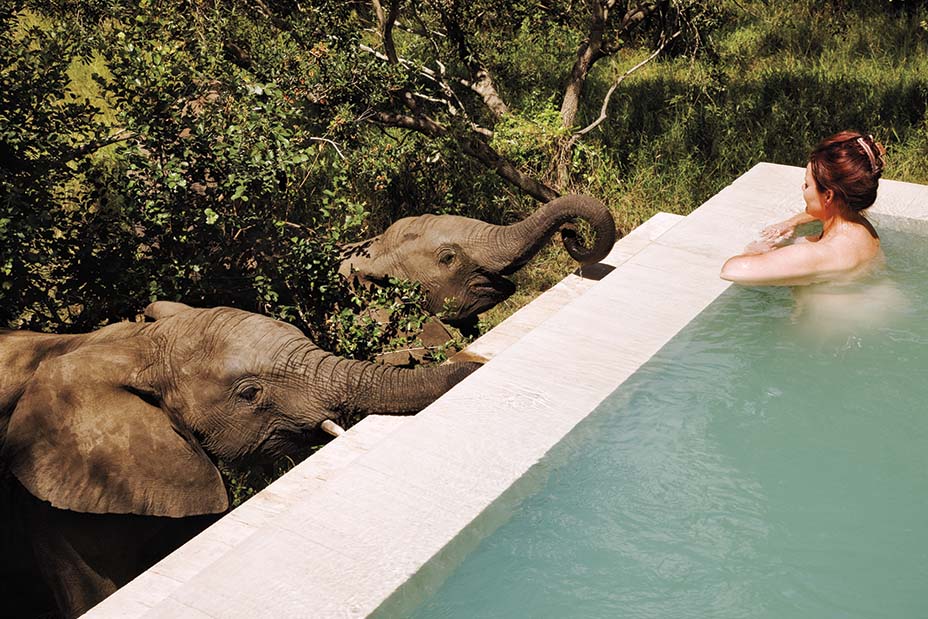 The plush Royal Portfolio property in famed Kruger National Park (from $1,794; theroyalportfolio.com), which has also boasted George Lucas, Jeff Bridges and Bono as guests, revealed a brand-new lodge in May, called The Farmstead at Royal Malewane. Within it is the three-suite Farmhouse featuring private bush walks, a butler, over-the-top spa treatments and tailored dining experiences (from $12,915).

A version of this story first appeared in the July 31 issue of The Hollywood Reporter magazine. To receive the magazine, click here to subscribe.