For luxury brands awarding red carpet contracts, the Golden Globes kick off the 2019 awards season. Gown, tux and jewelry designers — even hair-product companies — have begun paying out big deals to lock up talent as early as October, before the nominations are even announced in December. A North American head of a global jewelry brand says that if a “brand partner” wins a Globe, there is an additional bump in the contract, and if an actor or actress doesn’t receive a nomination, “then we’re screwed.”

The gamble is worth it, says a Hollywood dealmaker (who requested anonymity as such transactions are confidential and rarely revealed) for a number of luxury brands: “It’s the ultimate marketing tool. Here’s a global moment to get your product seen. Starting with the Golden Globes, the red carpet gets millions of eyeballs as opposed to, say, a movie premiere.”

Placing a gown or jewelry on an A-lister runs from $50,000 to $200,000 for a single red carpet appearance and, for a contract that encompasses the entire awards season, the total “could go up to the mid-to-high six figures or even seven,” says the dealmaker. Offers come in “from head to toe,” says veteran stylist Elizabeth Saltzman, who dresses Gwyneth Paltrow and Saoirse Ronan, as well as Globes co-host Sandra Oh and her Killing Eve co-star Jodie Comer. She adds, “Whether it’s hair jewelry, foundation, lipstick, self-tanner, underwear, shoes, the jewelry, the dress — deals can come from all of it.”

As filmmaking economics change, with the $20 million movie paycheck going by the wayside, red carpet contracts are more coveted than ever. “It’s very rare that the talent wants anything to come out of [their] pocket anymore,” says stylist Cristina Ehrlich, who is dressing nominees Laura Dern, Yvonne Strahovski and Penelope Cruz for the Globes. “The secret is out: Everybody knows that a lot of actresses are making more money on their endorsements than on being an actor.” With dress contracts locked up beforehand, red carpet stylists are acting more as facilitators between luxury brands and their clients than as actual stylists.

Golden Globes 2019: The Complete Guide to Parties and Events (Updating)

Rick Genow is an attorney who represents performers in negotiations with big brands, from awards-season riders to more long-term contracts for brand ambassadorships, which typically include personal appearances, advertising, and red carpet exclusivity. “You can’t bank only on performances in a film or TV career anymore,” he says. “Brands are going directly to talent that they hope speaks to their clientele. And now that celebrities have their own social media feeds, they are no longer dictated to by the networks or the studios.”

Months before awards season, marketers are following the film festivals, keeping an eye on reviews and seeing projects themselves. “We want to identify talent as opposed to celebrity,” says the dealmaker. “Luxury brands want someone who is known for something and not just for being famous.” Among the Golden Globe nominees, Lady Gaga was the name that came from several brand reps’ mouths as the first choice for placement, followed by Emily Blunt, Rachel Weisz, Claire Foy, Amy Adams, and Regina King, proving that while brands look for talent, they are looking for glamour as well.

“The Globes are a different beast than the Oscars,” says the dealmaker. “You’re never sure about the musical or comedy nominations — they’re more of a wild card. So it’s easier to focus on the drama and supporting nominations.” With such machinations in play, the red carpet question of the moment may be, as one longtime stylist quipped, not so much “What are you wearing?” but “How much did you get paid to wear that?” 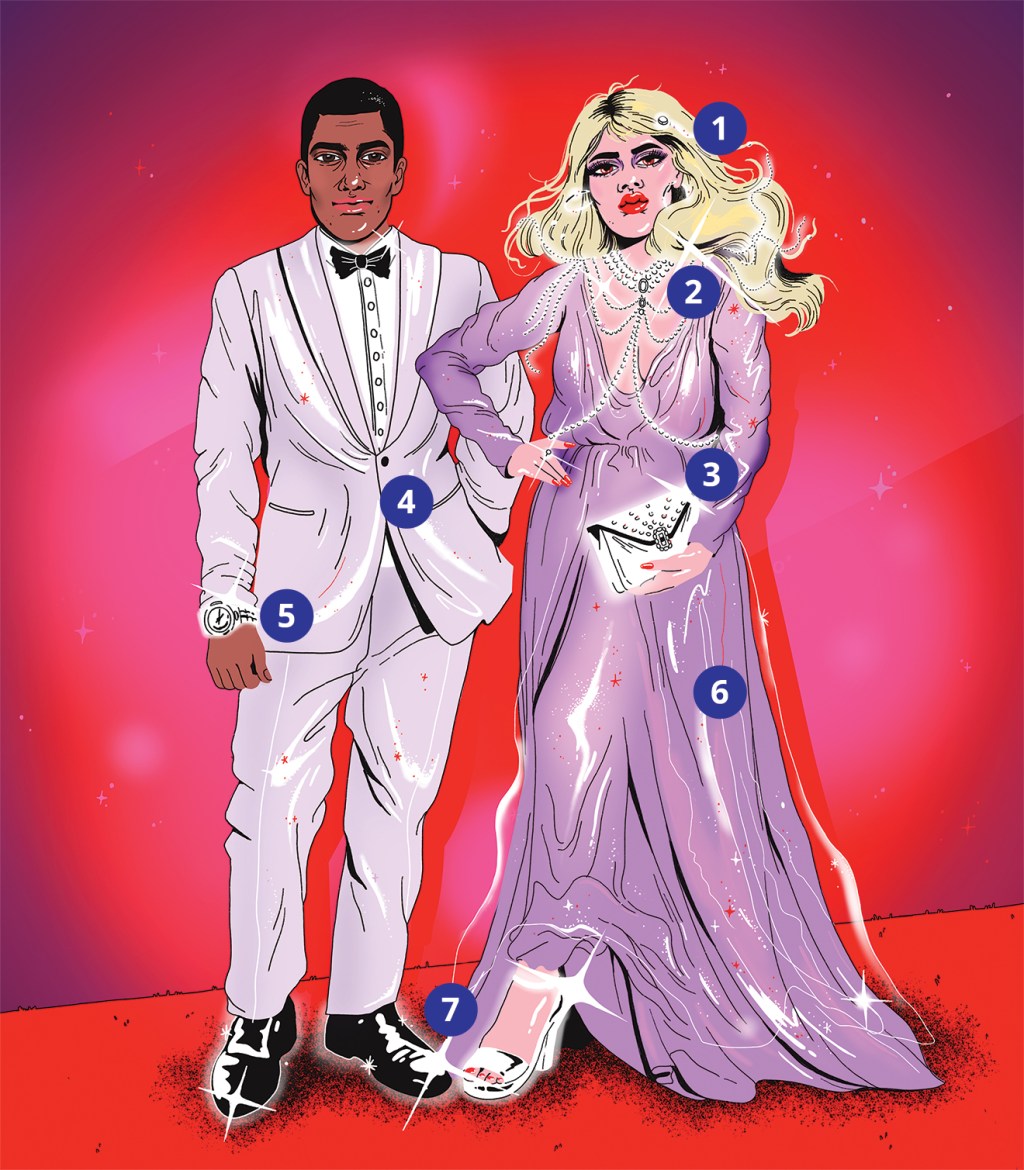 Though many makeup companies contract with or “sponsor” A-list beauty artists, talent can also cash in. “An actress might say, ‘Look what I carry in my purse — my mother’s good-luck charm and this lipstick,’?” says an agent. “For someone at entry level with 75,000 followers, one Instagram post starts at $20,000. The higher end is 500,000 followers” with fees to match.

“Cartier, Tiffany, Harry Winston, Bulgari, Repossi — they all do it,” says a major stylist. “Chopard is the one that started it all.” One well-placed PR rep says an A-lister at the Golden Globes could net a cool $125,000 or more for just one red carpet twirl in contracted jewels. “Earrings are the best because they also show up in hair and makeup roundups afterwards,” says another rep.

A longtime Hollywood fashion publicist estimates that the payday to carry a handbag one time on the red carpet is $10,000 to $15,000, adding, “anything less than that [is] kind of comical for an endorsement.”

“I used to think it was unscrupulous when people were paid on the red carpet, but then I heard that something a stylist put on a guy sold out and crashed the site for days,” says Jeanne Yang, who dresses Vice nominee Christian Bale. For awards season, men are more likely to work with a designer as part of a long-term contract that includes advertising and might be worth around $2?million, says one insider of an A-lister who’s allied with an Italian fashion house.

An actor can land $50,000 to $70,000 for the season or $10,000 to $25,000 for a single wearing, with some A-listers garnering six figures, plus the watch itself. Lucas Hedges tops the most wanted list of Globe nominees (“He has a great look and longevity,” says a brand rep. “It’s his second awards cycle yet his first time nominated”), followed by Rami Malek and John David Washington.

Rates veer from $50,000 to $200,000 for a one-time wearing at a show like the Globes, depending on the status of the star and “if she appears on best-dressed lists,” says a brand publicist. Fashion-ambassador deals to wear?a designer’s clothes all year land in the $200,000 range. Stars like Emma? Stone and Margot Robbie have all-encompassing advertising contracts with Louis?Vuitton or Chanel, respectively, which include red carpet?appearances that typically net seven figures, says a marketing VP, who adds that if the deal includes a fragrance, it could top $10 million.

Until recently, one couture footwear brand had never paid a star to wear?its wares, says a former rep: “We didn’t find it necessary. We had such loyal friends as Cate Blanchett, Jennifer Lawrence, and Nicole Kidman.” These days, an outside PR agency places those shoes at $5,000 to $10,000 per wearing.