Rivals breathed a sigh of relief at the weaker-than-anticipated June 21 opening of Toy Story 4. But that was cold comfort for those hoping to compete with the movie’s juggernaut distributor — as they discovered when the sequel vaulted back in its second weekend and amassed a total as of July 8 of $652 million.

This year alone, Disney has seen Avengers: Endgame come within an inch of Avatar‘s record-breaking grosses; its May 24 release Aladdin has earned $923 million globally, despite tepid reviews; and its July 19 remake of the animated The Lion King is expected to add lavishly to the company’s coffers.

For those who still don’t get the scale of Disney’s dominance, consider this: Its domestic market share is more than two and a half times what it was a decade ago, climbing from around 14 percent to more than 35 percent (helped substantially by acquisitions Marvel, Pixar and Lucasfilm, without even including its new purchase, Fox); it’s had 11 of the top 20 box office hits in the past five years, per Comscore, and 12 of them crossed the $1 billion mark worldwide.

All this poses a problem for studios that still harbor fantasies of toppling the Mouse House from its throne. And with Fox (with its Avatar and X-Men franchises), can anyone give Disney a run for its money?

“No, that’s impossible,” says a rival distribution chief. “Especially not now, with the sheer volume of releases.”

In fact, Disney released only 11 films in 2018, though that number will edge up with the Fox-generated titles. “If you combine Disney and Fox, you get around 40 percent of the market share this year alone,” says Paul Dergarabedian, a senior media analyst with Comscore. “And if Fox keeps making movies, that will only build.”

Market share isn’t the only thing at stake: With Disney deploying its franchise titles on prime release corridors, other studios are having trouble securing optimal dates to open their pictures.

“They’ve got a movie out on all the best play dates,” says former Sony Pictures vice chairman Jeff Blake. “You’d be crazy to put a big picture against them.”

Blake’s old base, Sony, was lucky to land the July 4 weekend for Spider-Man: Far From Home, one of the few non-Disney franchises that has shown staying power. The sequel has two solid weeks without strong competition before The Lion King arrives in theaters. It was given a helping hand, of course, by being a co-production between Sony and Disney’s Marvel.

Finding such openings, however, is going to get harder and harder — not solely because of Disney’s swelling release schedule but also because of its releases’ staying power. This year, Avengers: Endgame was No. 1 for three weekends; Captain Marvel and Toy Story 4 for two apiece; Aladdin and Dumbo both opened at No. 1, even if the latter then fell off. Add them up and Disney reigned supreme for one weekend in two for the first half of the year.

Success breeds success. With each franchise hit, the studio can plan another, allowing it to know long in advance when it will release a film, which in turn gives it leverage in strong-arming exhibitors and buying TV ads.

“Networks have what they call ‘pod exclusivity,’ ” says a veteran marketing and distribution executive, “which means they will only run one movie spot during each commercial break. Now, if you don’t buy early, you don’t get in at all.”

Buying early, as Disney does, allows it to demand the “A” position, running at the top of a commercial break. And in the rare cases when it needs to change a picture’s release date (as with Avatar 2, pushed back a year to Christmas 2021), its purchasing power gives Disney the right to cancel commercials with only 30 days’ notice, a luxury small spenders don’t get.

None of this makes it easy for beleaguered rivals to find a way around the leviathan. “It’s hard enough to make a good picture,” moans one exec. “Now you can’t find a time to release it.”

That leaves other studios such as Sony, Universal and Paramount — along with mini-majors like Lionsgate — in a quandary: Either challenge Disney on its home turf with big-budget projects or bet on lower-budget, riskier films that can benefit from nimble marketing and can shift their opening dates late in the game.

Other franchises are still proving viable, including Paramount’s long-in-the-tooth Mission: Impossible and MGM’s even longer-toothed James Bond. But few franchises have endured this well and others have struggled: witness X-Men’s Dark Phoenix and Sony’s Men in Black: International.

As to making smaller, original movies, Sony is betting that will pay off with Quentin Tarantino’s Once Upon a Time in Hollywood, which opens July 26 and cost a reported $95 million. Other rivals have penetrated deeper into areas Disney rarely touches — horror, female-centric and African American-targeted films. These can be highly profitable even if they don’t cross the billion-dollar mark to which Disney aspires — like Warners’ Annabelle Comes Home, which took second place to Toy Story 4 at the end of June and earned $76 million worldwide in its first five days, proving counterprogramming is still an effective strategy.

Warners also has greenlit a diverse slate, which in 2020 will include big-budget action movies like Christopher Nolan’s Tenet, the Wonder Woman sequel and Dune. It’s timed several releases to match holes in Disney’s schedule, which late last summer allowed it to lead the box office for five straight weeks with The Meg, Crazy Rich Asians and The Nun. That may be the most effective strategy of all, and Sony also used it with great success to launch the early-October superhero hit Venom, which grossed $855 million worldwide. Studios now have to get creative to make money around Disney’s dominance.

“Each of those opened when Disney did not have a big picture in theaters,” notes Dergarabedian. “That was the land of opportunity for other studios.”

The land of opportunity is fast diminishing, however, especially with the addition of the Fox slate. Will things ever change or is Disney destined to dominate through its tentpoles? Only a broad industry shift may alter the game.

“There’s a market for mid-budget films — dramas, comedies, love stories, but not when people have to shell out $20 in big cities to see them,” says former Fox distribution chief Chris Aronson. “[Consumers] won’t balk at paying $20 in big cities for Endgame, but they won’t pay that for Late Night and Booksmart. Exhibitors have to get into variable pricing and should have done so long ago.” 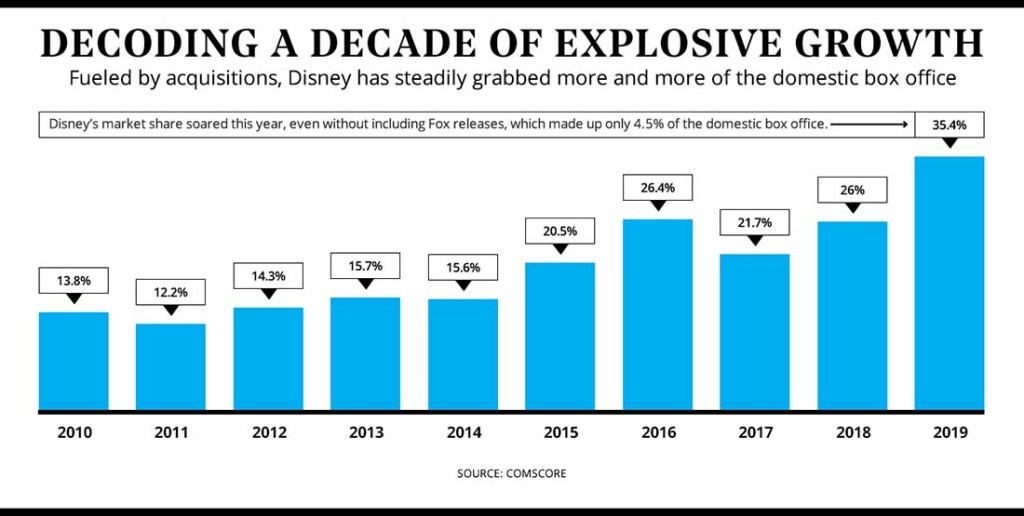