Upcoming film Okja has enough heart to make you swear off eating meat, at least for a while, as well as quirky dialogue and far-ranging style, from arch-feminine corporate CEO power looks to altruistic activist chic, all of which couldn’t be more timely.

Directed by Bong Joon-ho, the Netflix film that begins streaming June 28 tells the story of a young girl named Mija (Seo-Hyun Ahn), who has been living blissfully in the mountains of South Korea for 10 years with her trusted companion Okja, until a corporate overlord comes to take the lovable big pig away. The family-owned Mirando Corporation takes Okja to New York, where sugary-steely CEO Lucy Mirando (Tilda Swinton) has plans to use the pig as the cornerstone for a program to feed the world with genetically modified food. Determined to bring her friend home, Mija embarks on a globetrotting rescue mission with the aid of a band of animal activists led by Jay (Paul Dano) and clashes with the Mirando Corp.’s TV face, Dr. Johnny Wilcox (Jake Gyllenhaal), along the way.

A veteran of Snowpiercer, New York-based costume designer George (who partnered with Choi Seyeon on some of the Korean countryside looks) breaks down the research that went into the film.

Lucy Mirando’s wardrobe is a thing of beauty, and the first shot we see is a close-up of her white stilettos. Why is that the scene-setter?

We wanted a pair of white shoes. She’s wearing a white dress, and we loved the idea of her coming down the steps in the factory, and being the angel of all things eco-friendly. The dress is made out of linen, and the shoes are Tom Ford with gold heels that mirror the gold pig later on, the thought being that they would echo something that happens later in the story. 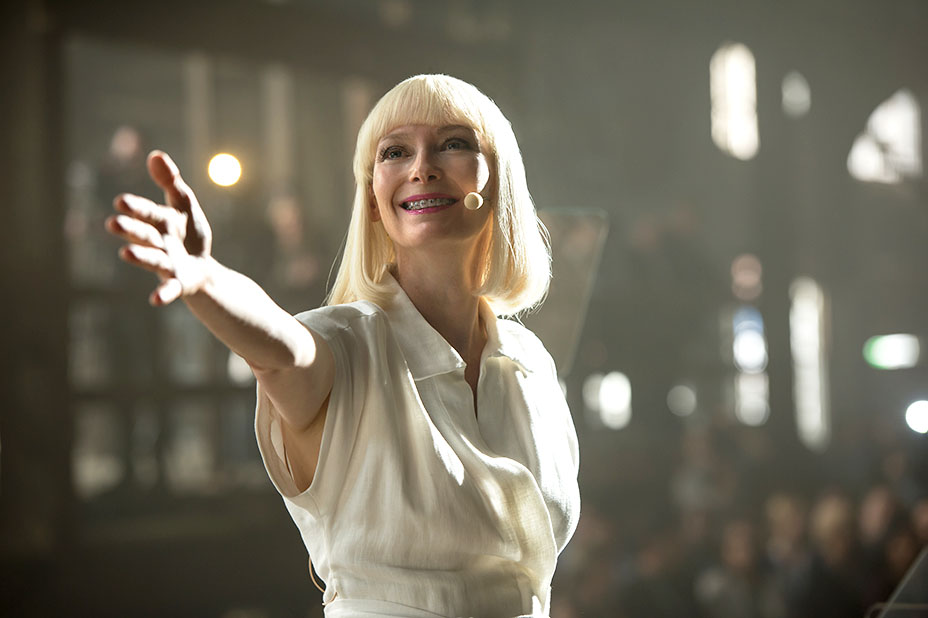 The white dress resembles a kimono.

It also felt a bit like a clinical spa robe. She’s saving the world.

I also noticed the braces on her teeth.

Yes, she’s just come out of a self-help course on the West Coast, has new perfect teeth, and she’s ready to come in and change the company and make the world love it.

How Tilda Swinton Got Chanel an Oversized Credit in 'Okja'

As she rises to power, she dresses in feminine suits, including a pink Chanel blazer with frilly cuffs. Did you research female CEOs and how they use clothing to project power?

Yes. We looked at Marissa Mayer (former CEO of Yahoo), Ivanka Trump, Elizabeth Holmes of Theranos and even Richard Branson. There are a lot of funny pictures of him in native dress from different places he visits. That gave us the idea that Lucy might wear a traditional Korean dress at the end of the film.

There was a bit of her in there (the short skirts and soft colors), but it was a cross section of people. 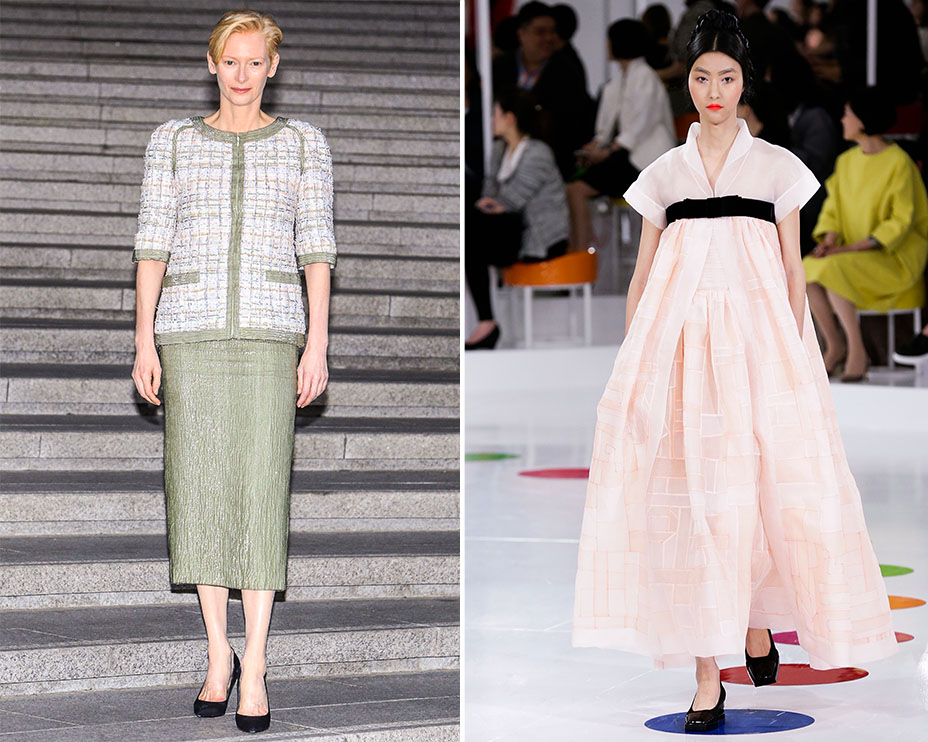 Did you give Tiida a certain color palette?

Yes, “piggy pink” as we called it. For example, the Chanel dress from the 2016 Cruise collection, which is reminiscent of a traditional Korean hanbok dress. Chanel was very excited to be part of the project. We had a custom dress made and added the Mirando green ribbon belt (the original runway dress had a black ribbon). We wanted to also keep the “piggy pink” color palette during the parade in New York celebrating Okja. I was looking at Oktoberfest and all kinds of festival-type costumes. I had reference pictures of girls wearing real sausages around their necks and showed those to director Bong and he said “yes!” If you get him to laugh, you know you are doing something right. 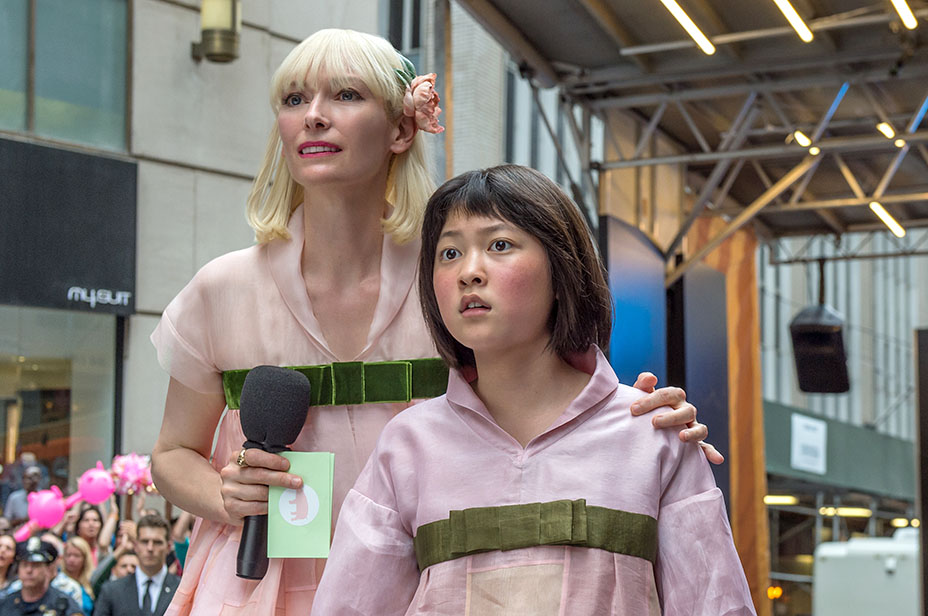 They didn’t. We made Mija’s in Seoul with a traditional hanbok maker. The Chanel dress is beautifully handcrafted patchwork, and Mija’s outfit is done with a slightly clumsy hand with the idea that Lucy designed the outfit herself. The hanbok is used for weddings quite a lot, and sometimes visitors will wear them. I even came across a photo in my research of Britney Spears wearing one. It was really fun for me to go down that route and go to the maker.

It’s my third time working with her. She’s down for anything. We have a lot of fun in fittings, and it’s a bit of a party. But the fashion thing is a different persona for her. 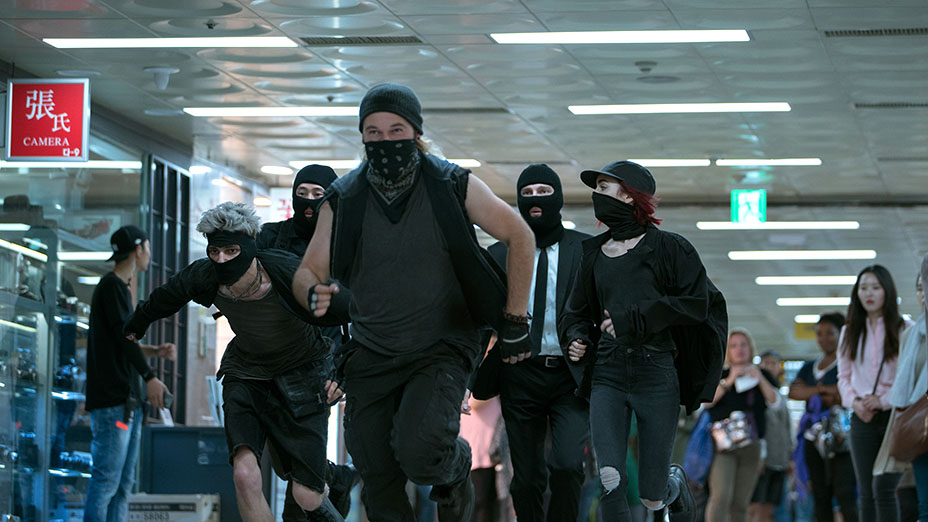 How did you research the costumes for the Animal Liberation Front members?

Director Bong had the idea to put Paul Dano in a suit, which was unconventional, but then in our research we came across a picture of an Animal Liberation raid and the guy was actually in a shirt-and-tie and suit jacket and balaclava, which gave us license to run with it. He is the leader of the group, and takes the mission very seriously and wants to portray that through his clothes. We tried on many black suits that had all the qualities in fit and color. Director Bong wanted a very specific black.

We also had a backstory for each character, for instance Devon Bostick who plays Silver, he’s the one who’s trying to have the smallest carbon footprint possible and not eating properly. As I was thinking about it, I thought he probably doesn’t drive in a car so he would be a cyclist, and from that I came with the idea of him being a bike messenger in his daytime life, and that’s where his style came from: his fingerless bike gloves, his baggy shorts and his pouch that belts around his waist. There’s also a short scene where he wears a kind of a kilt, a divided skirt that I found in a thrift store, a Comme des Garcons kilt, everybody loved it.

I imagine the activists wouldn’t be wearing fast fashion, right?

We tried to find as much as we could by thrifting, but they had to have multiples because there is so much action, so we either found it or found it and distressed it, and figured out a way to come up with multiple looks. 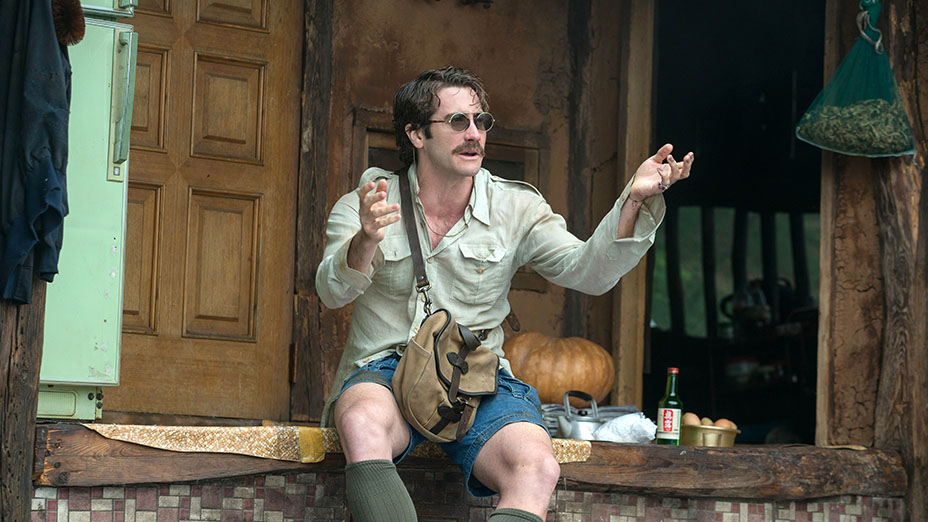 Yeah, when I read the script, it mentioned Animal Magic, which was an actual show in the U.K. in the 1970s. There was a TV presenter called Johnny Morris, a TV personality and animal expert, and I’d seen that show growing up. I researched him and Jack Hanna, who wore those safari-type outfits. When we had a fitting, Jake totally went for it and hitched up those shorts. He also wears a Hawaiian shirt everyone loves. It’s hard to see in the movie, but there are tiny little animals on it, and it came from a company called Eton shirts. He also wears Keen shoes and the socks — I got those at a real Boy Scout shop!