Molly Sims is getting a little teary. “I have three children under 4. It’s so sad what these families go through,” says the model and wife of Netflix Original Films head Scott Stuber. She’s sitting with a few dozen other women — actresses (Julie Bowen, Michelle Monaghan), talent reps, interior and fashion and jewelry designers, and wives of producers and hedge funders — at the April board meeting of Baby2Baby, which in the past six years has grown into one of L.A.’s most high-profile philanthropies.

The women take turns talking about why they serve as “Angel” ambassadors for the group, which distributes essentials (from diapers to cribs and clothing) to families around L.A. County, where more than 400,000 kids live below the federal poverty line. Baby2Baby, which will serve 150,000 kids this year, provided 11.8 million items to children, from newborns to 12-year-olds, in 2016.

Most of the women gathered at the organization’s headquarters near LACMA speak of their gratitude that Baby2Baby allows them to model giving back for their own kids. “Baby2Baby helps my children know what it is to make the world a better place. I love that this organization gives me an opportunity to teach them that,” says Soleil Moon Frye, the Punky Brewster actress and co-founder of kids’ arts-and-craft website Moonfrye. She says that her four children look forward to taking part in the group’s holiday event. “They get to go and provide for a family other than themselves.” One or two of the women talk about knowing hardship themselves growing up. “I was born on the South Side of Chicago,” says interior designer Brigette Romanek (wife of director Mark Romanek). “My neighborhood doesn’t exist anymore because it was so bad. I know what all of this is.”

While Donald Trump isn’t mentioned, there are nods around the table when actress Busy Philipps gets fired up about the political moment. “When people need help, we don’t say, ‘Go fuck yourself,’ ” she says. “We help one another.”

Leading the meeting are Baby2Baby co-presidents Kelly Sawyer Patricof, a former model, and Norah Weinstein, a former securities litigator at blue-chip firm Skadden Arps. Both have deep ties in entertainment: Sawyer Patricof’s husband is Captain Fantastic producer Jamie Patricof; Weinstein, who spent a year in the 2000s at THR, is married to newly named Bad Robot president and COO Brian Weinstein. But since taking over the organization in 2011, they’ve widened its impact well beyond Hollywood, partnering with 21 similar organizations around the country to form the Baby2Baby National Network in order to steer donations more widely and share information on such issues as grant-writing, distribution and staffing.

The key formula for their organization’s success: harnessing the power of stars and influencers. A-lister Angels including Sims, Jessica Alba, Nicole Richie, Jenna Dewan Tatum, Kelly Rowland, Kate Hudson, Drew Barrymore and Rachel Zoe host events (holiday fetes, Mother’s Day parties) with brands (Huggies, Havianas) that make financial and in-kind donations. Angels are expected to be hands-on. During the meeting, Sawyer Patricof holds up a T-shirt, designed by new ambassador Rowland, on sale for Mother’s Day. “You will all wear it and Instagram it, just so you know,” declares Sawyer Patricof. 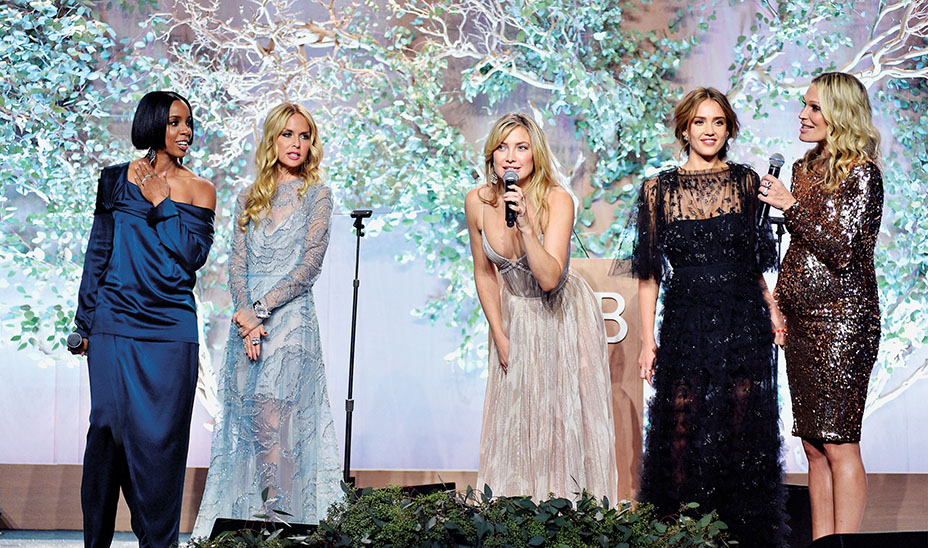 “The ask is, ‘We’re going to get 3 million diapers for you to host this — and you know these diapers are literally going to let families keep their lights on, pay their rent, put food on the table,’ ” says Sawyer Patricof. “How could anyone say no? And they don’t.” Diapers, which can cost nearly $1,000 per child annually, may account for 6 percent of the gross pay of a single parent making federal minimum wage. Some parents stretch their supply by limiting diapers for use only outside the house or by drying out used ones. Food stamps and WIC don’t cover diapers, and most day care centers require that parents provide a full-day supply. “If Baby2Baby can supply the diapers, then hopefully the mom can stay in or get back into the workforce,” says Sawyer Patricof. Cribs are in high demand as well, in a city where one child dies a week from an unsafe sleep situation. Bugaboo strollers, not so much. Too heavy and bulky, says Weinstein, “The reality is that if you’re trying to get on a bus with your four kids, you can’t pick up a $1,000 stroller.”

Today, Baby2Baby has roughly 40 drop-off locations in the city for gently used items. “There’s a lot of gently used items that you just go through as a parent and you’re like, ‘What do I do with it now?'” says Alba, making the pitch for donating them. “Basically every three or six months you’ll never need that item again that you needed so badly in the moment.” To distribute supplies, its three warehouses operate under what it calls a “shopping” model. More than 2,300 social workers from 131 partner organizations (including Children’s Hospital, LAUSD, and the Department of Child and Family Services) are approved to pick up what they need on the spot. “It’s like a pro bono Amazon,” says ambassador Alison Kay, an investment adviser. “Partner organizations can have a closet full of essentials, so they can focus on service.” Adds Alba: “They are giving to organizations that really encourage and empower people to break their own cycle of poverty.”

Sawyer Patricof and Weinstein were introduced about a decade ago by Sawyer Patricof’s father-in-law, private equity investor Alan Patricof, who knew of their mutual interest in philanthropic work. A few years later, they started to talk about launching a nonprofit. “Entrepreneurialism is appealing to me,” says Weinstein, who did pro bono work helping families obtain low-income housing when she was a litigator. Adds Sawyer Patricof, “I had a big idea that I wanted to squash poverty in Los Angeles, I would get all my friends behind it and we would do something big.” Her charitable work had previously involved volunteering at a Head Start center in Harlem. She recalls being there one day helping a young boy with math homework. “And he started crying, and he’s like, ‘My feet just hurt, I can’t do this,’ and came to realize he was wearing shoes that were three sizes too small. His feet were bleeding.”

Together, the two women canvassed a number of nonprofits to assess what needs weren’t being addressed. “We met a bunch of different groups around Los Angeles. The one thing they all said was, ‘What we don’t have is access to basic necessities like diapers,’ ” says Sawyer Patricof.

Then the pair came across an existing organization that was providing exactly this type of service. At a 2010 meeting with Baby2Baby, started by three mothers in 2005, Sawyer Patricof and Weinstein asked the founders if they would consider turning over the org­anization. “They handed us the keys,” says Sawyer Patricof. “They were thrilled that two women wanted to take it off their hands.” The volunteer-only group had an annual budget of $12,000. “It was much, much smaller. It was more focused on donated items, and now Kelly and Norah have brought it more to scale with corporate donations,” says Alba, who calls Sawyer Patricof “my BFF.”

Once the new co-presidents took the reins, things took off quickly when Rachel Zoe, a close friend of Sawyer Patricof’s and now a board member, got pregnant. “Rachel told me that she was getting sent all these baby things from companies and she didn’t need extra things,” recalls Sawyer Patricof. So the group threw a charity baby shower for Zoe. Soon after, Baby2Baby threw a party to announce its relaunch. When a photo of guests Alba and Richie (both friends of Sawyer Patricof) appeared in Us Weekly, a publicist from powerhouse PR agency Edelman, who had seen the shot, called the organization to see if one of the stars would host a party with their client Huggies. In return, the company would donate 100,000 diapers and make a contribution to the nonprofit. “First we negotiated and got more money, and then Nicole hosted our first Huggies event,” says Weinstein.

She and Sawyer Patricof, plus their husbands and some of their friends’, unloaded that first big delivery themselves. “We didn’t know what a pallet was and how hard one is to open,” says Weinstein. Today, they have volunteers and groups from companies (Goldman Sachs, Disney) unload the trucks, though Sawyer Patricof still likes to jump in there occasionally. She and Weinstein now work full-time running Baby2Baby, which has an annual budget of around $6 million. Its sellout gala in November honoring Jennifer Garner raised nearly $3 million, with all costs — “Every fork, every knife,” says Sawyer Patricof — covered by sponsors. 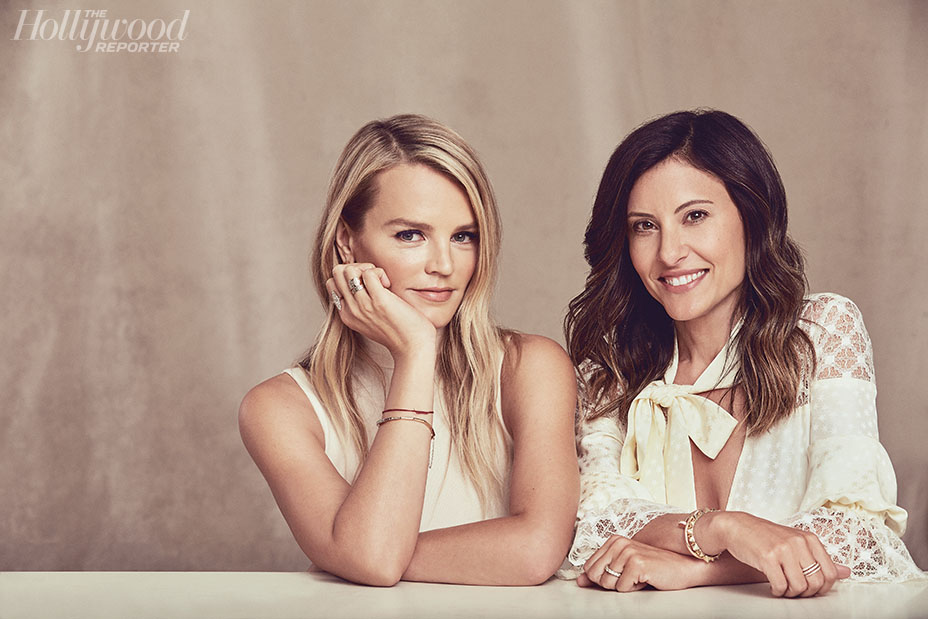 At a Mother’s Day playdate at Baby2Baby headquarters, sponsored by stationery site Tiny Prints, actress Kristen Bell was the host, and a half-dozen other ambassadors, including Bowen and Rowland, lent a hand. Dozens of mothers — clients of Homeboy Industries, which helps formerly gang-involved men and women — streamed in with kids for activities like painting and making bouquets. “One mom I spoke to was incarcerated for three years,” says Rowland, as she held a baby whose mother was getting a manicure. “Her son is 5; he’s connected to his mom at the hip.” There’s a palpable feel-good-by-doing-good vibe in the room. “Actually working with the kids and their families is a huge thing for me,” says Dewan Tatum. Adds Bowen: “It feels so much better than when you go to a name-a-disease fundraiser where everybody is all dressed up and you are writing a check and maybe there’s a video, but you are not feeling the impact.”

And the impact of Baby2Baby’s services is only growing, especially as homelessness jumped 23 percent in L.A. County between 2015 and 2016. “In this political climate, organizations are seeing cuts, so requests continue to grow,” says Weinstein. Baby2Baby is on the hunt for a new warehouse (the lease on their biggest one is up in a year). And Sawyer Patricof and Weinstein are making regular trips to Sacramento, lobbying the state to classify diapers as a necessity so they’d be — like food — exempt from sales tax. It’s another arena in which the group’s powerful supporters may help move the needle. “If you have a direct or indirect connection to Jerry Brown,” pleaded Weinstein at the board meeting, “let us know.”