Continue to The Hollywood Reporter SKIP AD
You will be redirected back to your article in seconds
Skip to main content
February 4, 2020 7:15am

In the past month, Joaquin Phoenix has swept the best actor categories at the Golden Globes, the Critics’ Choice Awards and the SAG Awards for his titular performance in Joker. Now he’s the heavy favorite for the Oscar.

Phoenix — known to not enjoy awards-circuit glad-handing and posing for photos — has famously been averse to campaigning. This season, though, he has jumped in, and has paired his Oscar pursuit with animal rights and climate change activism. “For someone who’s having a pinnacle moment in their career, he’s giving back at the same time,” says actress Jorja Fox, producer of the 2019 animal-rights documentary The Animal People, which Phoenix, a longtime vegan, executive produced.

Indeed, not many contenders have so closely wed promotional duties with radical activism. On Sept. 9, on his way to receive a Tribute Actor Award from the Toronto International Film Festival, the actor made an appearance at a vegan protest inside the city’s subway system. On Nov. 1, fiancee Rooney Mara joined him at a L.A. event for Extinction Rebellion, a climate change group that advocates nonviolent civil disobedience. He got arrested at Jane Fonda’s Fire Drill Fridays in Washington, D.C., on Jan. 10. (“I didn’t invite him, he came on his own volition,” she told the crowd.) And on Jan. 19, he left the SAG Awards to attend a “pig vigil” in Vernon, California, held by a group he’s been involved with for several years, Los Angeles Animal Save. Still in his tux, Phoenix, 45, watched as hogs were driven into a processing plant for slaughter.

Behind the scenes, sources say Phoenix has spearheaded an effort to turn this season’s awards shows vegan, beginning with the Golden Globes. After he lobbied the Hollywood Foreign Press Association to go all-vegan at the event, it made a last-minute switch. When Phoenix took the Globes podium on Jan. 5, he acknowledged the HFPA for its “very bold move making tonight plant-based. It really sends a powerful message.” Soon after, in what seemed like a cascade effect, Critics’ Choice and SAG followed suit. 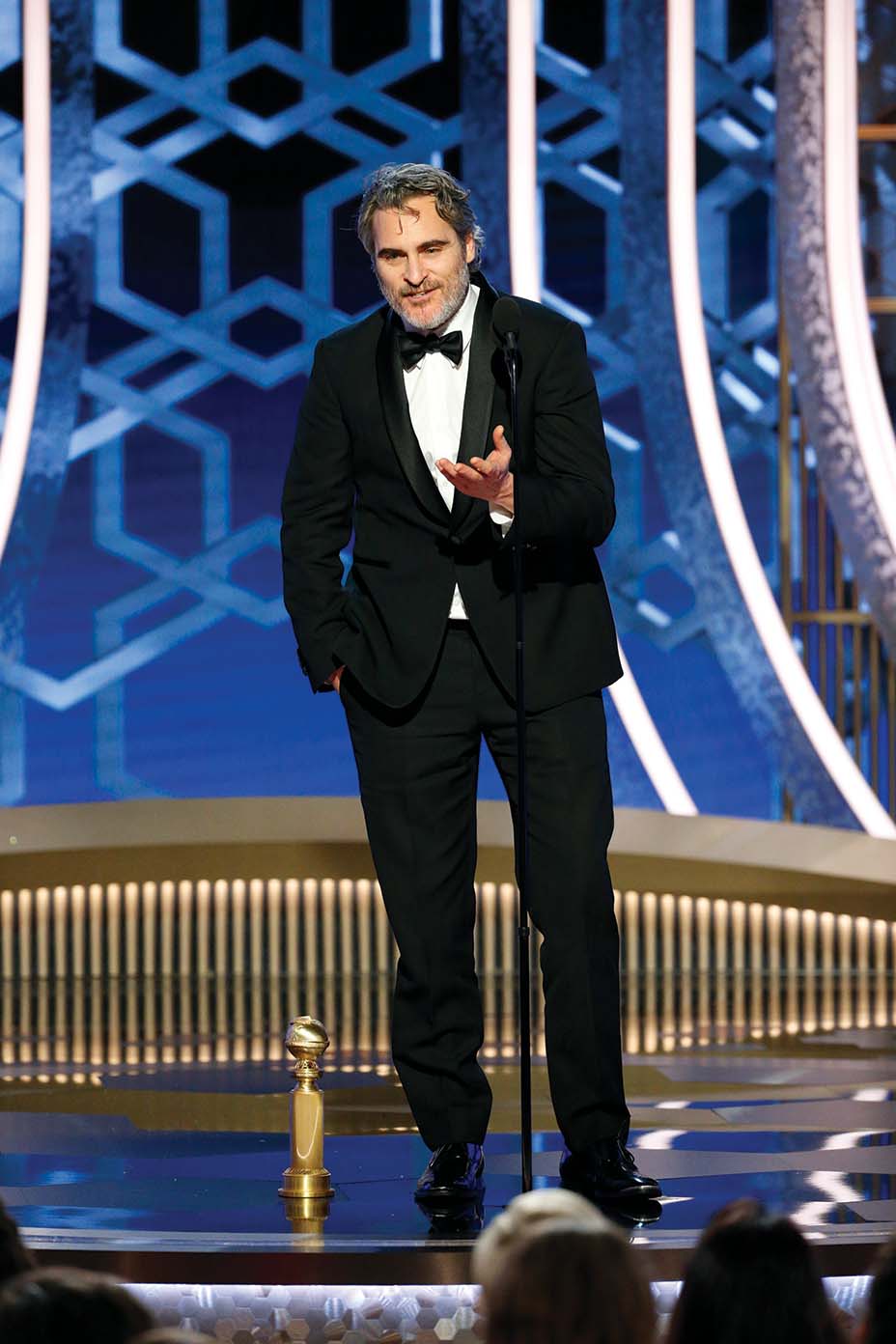 THR has learned that the actor pushed for changes at those events, too. Phoenix, who declined to comment for this story, contacted Critics’ Choice Association CEO Joey Berlin 10 days before the show. His email was accompanied by signatures from the likes of fellow nominees Leonardo DiCaprio, Phoebe Waller-Bridge and Kristen Bell. “We talked it over with the network and our sponsors and agreed that it would be a good thing to do,” explains Berlin, who observes that there’s a practical benefit to going meat-free: “You don’t want to end up with a cold burger, but a cold plant-based burger is OK.”

Phoenix’s pitch, as Berlin characterizes it, was that meat agriculture is a leading cause of climate change and that the televised spectacles should use their platforms to address pressing societal issues. (According to the United Nations, livestock generates 14.5 percent of human-induced greenhouse gas emissions globally.) The carbon footprint reduced on site would pale in comparison to the symbolism beamed to viewers. 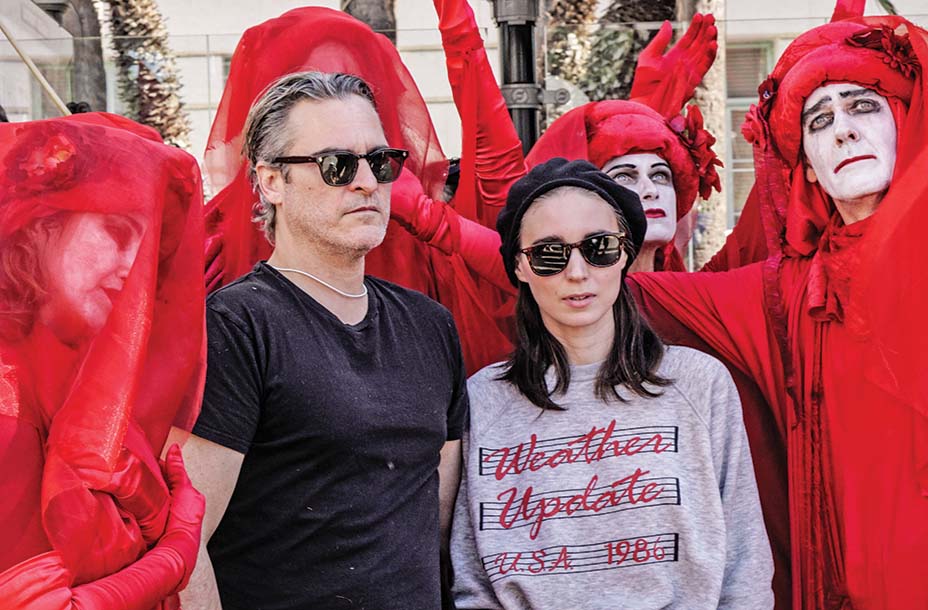 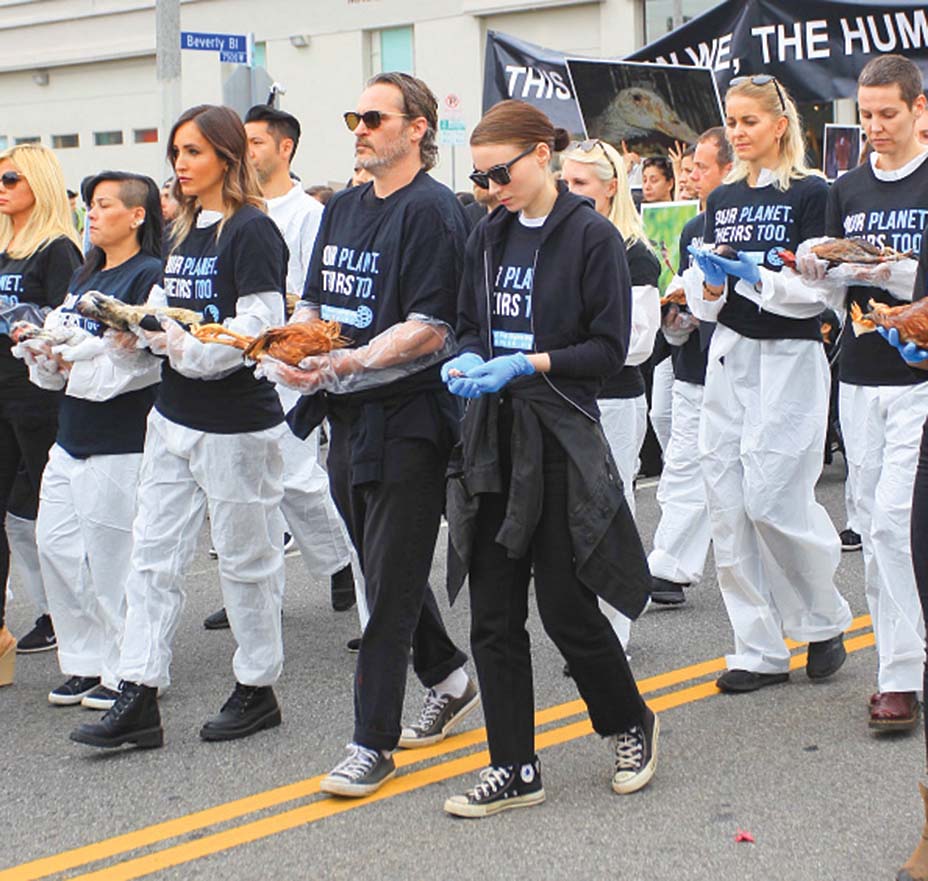 Phoenix sent similar missives to SAG and the Academy. The all-vegan offerings on awards show menus have won plenty of cheers, but also some jeers. The Marvelous Mrs. Maisel‘s Alex Borstein complained on social media about the SAG Awards food, writing, “I am not a rabbit.”

Since then, the Academy has jumped on board, offering a plant-based menu at its Jan. 27 Nominees Luncheon, then announcing that all food served in the Dolby Theatre lobbies Feb. 9 before the Oscars will be vegan. The Wolfgang Puck-catered Governors Ball, which previously offered a 50 percent plant-based or vegetarian menu, will upshift to 70 percent. Meanwhile, Phoenix’s agency, WME, is going plant-based for its Oscars-weekend party. The star put in the request to the agency’s executive leadership through his rep, Boomer Malkin.

“He knows what can be done,” says Lisa Lange, senior vp communications at PETA, which the actor has been involved with since the 1990s. “He knows he’s in a good position to push. He enlists friends. And it works. He can have influence in Hollywood, and it influences the rest of the world.”

Adds Aylam Orian, president of Our Planet Theirs Too, an animal rights group the actor has supported: “Joaquin is very shy. He doesn’t like to speak in public. He’s pushing himself to do this.”