A year ago, the fate of Broadway’s To Kill a Mockingbird hung in the balance, due to a lawsuit filed by the estate of author Harper Lee in Alabama, claiming that the script departed from the spirit of the 1960 novel. That legal salvo came after a Dec. 13 opening date and principal cast had been set and, for a time, seemed like it might derail the production.

Fast-forward to today, with the dispute long settled (the terms were undisclosed) and the play five months into its blockbuster run at the Shubert Theatre. To say that this retelling of Lee’s story of virulent racism in the Jim Crow-era Deep South — by playwright Aaron Sorkin, director Bartlett Sher and a peerless ensemble led by Jeff Daniels — has touched an emotional chord with contemporary audiences seems an understatement.

Asked if he had anticipated such an intense audience connection to the material in 2019, Sorkin admits he had not: “This has really been something else.”

No seat to any performance has remained unsold and the production is notching up the kind of grosses normally only seen by musicals, hitting $1.5 million to $1.7 million every week, with a total of $33.4 million as of Sunday. That’s not counting advance ticket sales, which have remained consistent at a staggering $22 million. The show is within a week of recouping its $8 million capitalization — a dizzyingly short time for a production of this size.

With business showing no sign of slowing, the production is on track to become the highest-grossing American play in Broadway history within the next three weeks, overtaking the starry 2014 revival of Terrence McNally’s theater-biz farce, It’s Only a Play, with $37.5 million. And a two-year national tour has just been announced, kicking off in August 2020 at the Kennedy Center in Washington, D.C. 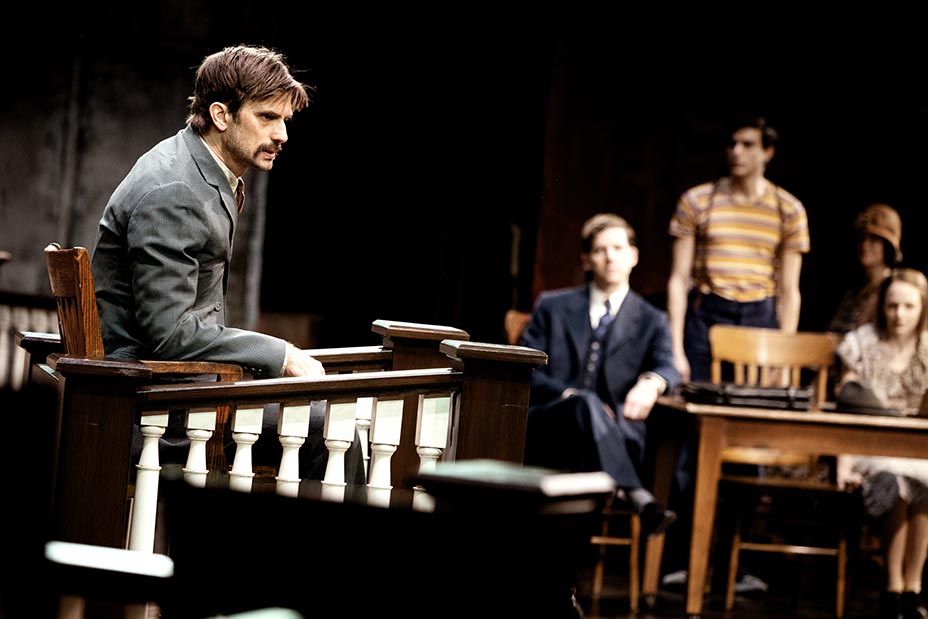 Lead producer Scott Rudin has shepherded his share of star-driven Broadway smashes — among them Larry David’s Fish in the Dark, Denzel Washington in A Raisin in the Sun and Daniel Craig and Rachel Weisz in Betrayal, all strictly limited engagements, unlike this open-ended run. But he says he’s never seen anything like this.

“I knew the power of the title and the strength of people’s affection for it, I didn’t doubt that,” says Rudin. “But that doesn’t get you the whole way here. To have something like what this has become requires extraordinary word-of-mouth, because you’d be seeing the advance play off by now, and it hasn’t played off a dollar.”

“I think it has to do with the fact that it’s a certain kind of luxe Broadway event,” he adds. “It’s a big play in a big building, and people really respond to the scale of it. It’s like the plays I saw as a kid, like Inherit the Wind and The Great White Hope, that had big casts and big productions and felt like they moved the ions in the air in the way that only a play can really do.”

Major hit plays pulling in this kind of money on Broadway these days almost invariably have big-name casts driving sales. Both Sorkin and Daniels, who stars as principled Alabama lawyer Atticus Finch and signed on for a full year, are significant marquee draws, but Rudin notes that the magnet here is as much the property itself.

“I think in a way it’s about forgiveness and community at a time when people are very eager for messages of inclusion and fairness and decency and compassion,” says the producer. “Empathy, that really is the subject of it, and I think we’re living in a very unempathetic time. It is very, very clearly speaking to people right now.” 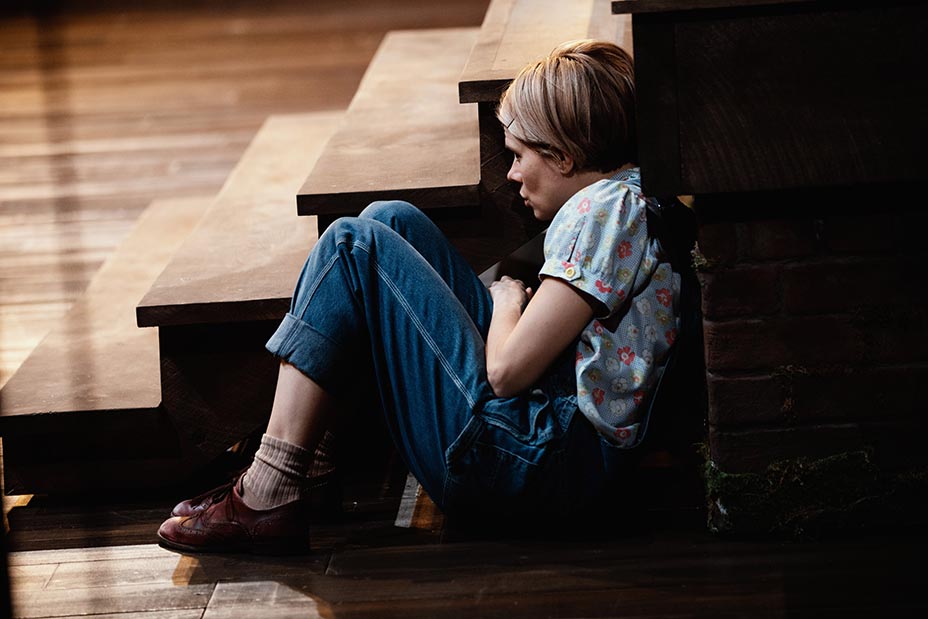 “Just having decency be the goal, the higher ground that we’re reaching for is something all of us are thirsty for these days,” adds Sorkin.

Rudin currently is producing a two-hour documentary feature for HBO, provisionally titled All Rise: Echoes of “To Kill a Mockingbird” and likely to air in the fall. The film will be a wide-ranging examination of the novel and its impact, touching on the controversial 2015 publication of Lee’s Go Set a Watchman, the 1962 Robert Mulligan movie written by Horton Foote, the play and historian Joseph Crespino’s book Atticus Finch: The Biography.

“It’s got a lot of extraordinarily smart people talking about and engaging with what the book means,” says Rudin. “Why it mattered, why it still matters and still speaks to people in as profound a way as it does.”

But Rudin says one of the most gratifying moments was when the grandson of A.C. Lee, who was the author’s father and widely credited as the inspiration for Atticus Finch, attended, calling the production the most radical version of To Kill a Mockingbird he had ever seen.

Much more than the revered film version, in which Gregory Peck’s Atticus has come to represent a monument of unimpeachable morality, that central character in Sorkin’s adaptation is explored in the more granular context of the period and the town. The play examines what Atticus stands for and the ways in which he is compromised, as well as the ways he grows in the course of defending a black man falsely accused of raping a white woman. 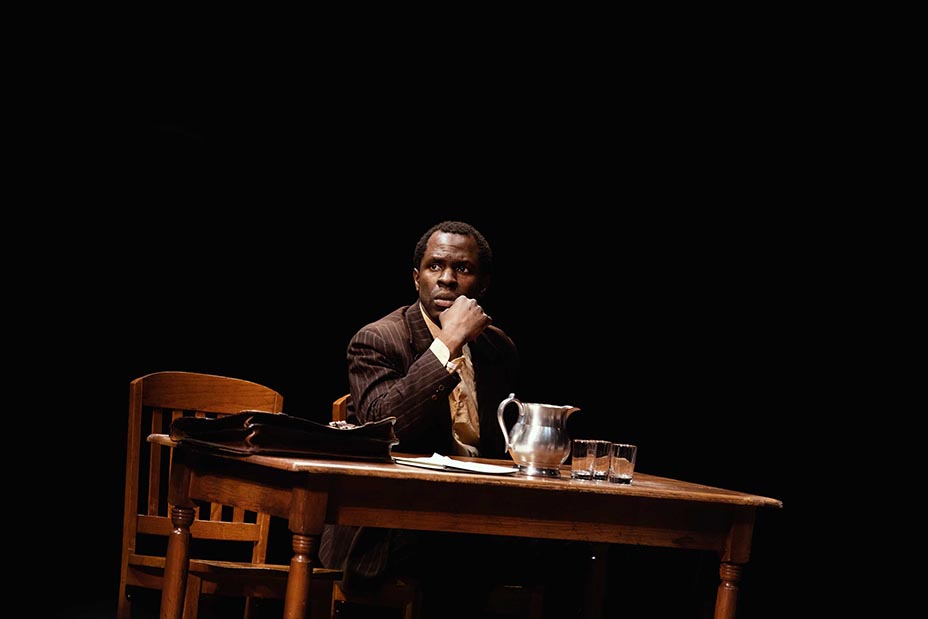 Sorkin views the profound change in Atticus by the end of the play as the fundamental difference separating his adaptation from the novel or movie. The lawyer begins the play convinced that his friends and neighbors in the town of Maycomb would never send an obviously innocent man to the electric chair. By the end of the play he sees that he was wrong.

“I think that a lot of us, no matter where we are on the political or ideological spectrum, in the last few years felt like we thought we knew our friends and neighbors, and we didn’t,” says the playwright.

Sorkin freely admits he initially thought tackling such a beloved novel was a “suicide mission,” and his first draft, by his own assessment, was “harmless” at best. “It was like a greatest hits album made by a cover band.”

Prompted by Rudin to screw up his courage and bring a fresh perspective to the story, Sorkin says: “I decided that instead of swaddling the book in bubble wrap and gently transferring it to a stage, I would write a new play. And that I wouldn’t try to pretend I was writing it in 1960, and I wouldn’t try to do a Harper Lee impersonation.”

The production took three years to come together — a year of which was consumed by Rudin’s complicated wrangling to obtain the rights — with multiple workshop labs during the writing process, six weeks of rehearsal and a lengthy six weeks of previews ahead of opening night. 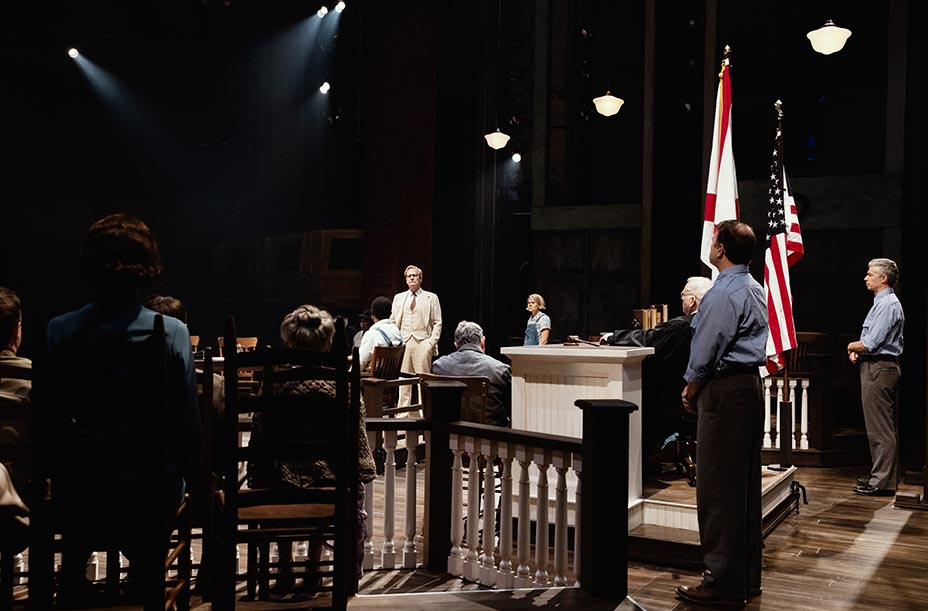 “We felt during those labs and during rehearsal that we had something special,” says Sorkin. “But when we put it in front of an audience during previews, we saw that, within a minute, people had forgotten any preconception they walked in the door with, and they were experiencing something new. It was landing with audiences in a way we only could have dreamt of.”

While Lee’s novel has remained high on the list of America’s most cherished books since its publication, the story’s theme of racial injustice has been amplified and made newly trenchant by events that have shaken the country in recent years, like the Charleston, S.C., church shootings in 2015 and the Charlottesville, Va., white supremacist rally two years later, both of which had a profound impact on Sorkin’s writing.

“Atticus keeps repeating as his mantra, ‘There’s goodness in everyone. All you have to do is crawl around in someone else’s skin.’ Throughout the book, he keeps excusing inexcusable racism from his neighbors,” Sorkin explains. “So when Donald Trump said [after Charlottesville], ‘There were fine people on both sides,’ suddenly I thought, you know what, there just isn’t enough daylight between Atticus and Donald Trump on this particular issue.”

“Obviously, it’s two different sentiments, and with Atticus, it’s coming from a place of goodness,” he continues. “But I thought, this is really very relevant now. It stopped being an exercise in nostalgia, it stopped being a museum piece and became a brand-new play for today.”

“It’s hard to find a play that’s extremely political and also extremely popular, because they tend not to go together,” adds Rudin, who says he has no estimate for how long the production might run on Broadway. “I honestly have no idea, I don’t know what normal is for it. But it’s vastly exceeding any life for a play that we’ve ever had.”

A version of this story also appears in the April 11 issue of The Hollywood Reporter magazine. To receive the magazine, click here to subscribe.

'To Kill a Mockingbird': Theater Review