An out-of-town wife and 3-year-old daughter forced Adam Steck to cancel plans to attend the Route 91 Harvest music festival Oct. 1 with his cousin. No big deal, thought the veteran Las Vegas show producer, until his phone lit up just after 10 p.m. “I got a text from my company manager at Thunder From Down Under, and I called my cousin as he was walking in,” recalls Steck. “I could actually hear bullets rattling off through his phone, people running down the street. It was just absolute mayhem.”

His cousin escaped unharmed. Steck, who also produces Boyz II Men’s show at The Mirage and Mike Tyson’s Undisputed at MGM Grand, spent the next several hours calling artists, friends and family as TV and social media spread word that Stephen Paddock, perched on the 32nd floor of the nearby Mandalay Bay hotel, was firing relentlessly with 23 rifles and automatic weapons at the 22,000 festivalgoers enjoying a set by country star Jason Aldean. By the time Paddock, 64, was discovered dead in his hotel room from a self-inflicted gunshot, 59 people were dead and 527 injured in the worst mass shooting in modern U.S. history.

The tragedy has left the close-knit Las Vegas entertainment community reeling, just as many in the global live music industry are questioning the future of large-scale outdoor festivals in major cities (like Austin City Limits, beginning Oct. 7) or even in remote locations (like Coachella). “Can we stop this? To the credit of most major promoters, all of our management team and our staff, they prepare the best that they possibly could for security threats, [but] you can’t protect everyone at every moment. It’s an absolute tragedy,” Jon Loba, exec vp at BBR Music Group, Aldean’s label, tells Billboard.

He adds: “Do I think it will stop artists wanting to perform? No. Will it stop listeners wanting to have that experience? No. Especially not in this genre.” Steck, who began his career producing outdoor music events in Iowa, agrees: “You could not have taken any [safety] measures — it was a total random act of evil.” 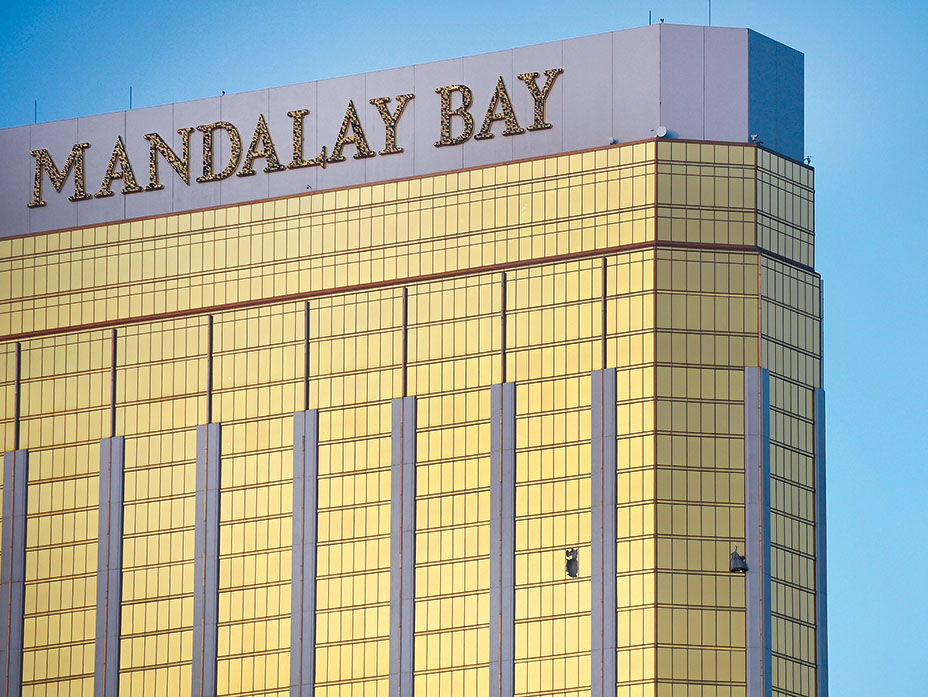 But where does that terrifying fact leave the concert industry, a $9.6 billion business in the U.S. in 2016 that is projected to grow to $9.9 billion in 2017? The illusion of safety at an indoor music venue was shattered by the Paris rock club attack of November 2016 and the May terrorist bombing of an Ariana Grande concert in Manchester, U.K. Now an outdoor festival was hit by a brutal attack. What about other aspects of live entertainment, including sports, theme parks or even live theater in places like New York’s Central Park? “This is a new order of magnitude — automatic weapons,” adds Miami Beach Police Chief Don Oates, who in 2012 led the investigation into the Aurora, Colorado, movie theater shooting. “It is as if each new person wants to be bigger and more grandioso than the one before, so it’s absolutely perverse.” Oates predicts Las Vegas and other police departments will now adjust their tactics when securing outdoor venues, just as adjustments were made after gunman James Holmes killed 12 people and injured 70 during a screening of The Dark Knight Rises. “What buildings are in the line of sight, within shooting distance, and what security can be done on those buildings prior to a concert” all will have to be taken into account, he says.

Las Vegas, home to such resident artists as Elton John, Britney Spears and Celine Dion, has been aggressively courting live music acts — and specifically outdoor festivals — in recent years. Buoyed by the likes of Life Is Beautiful, Rock in Rio, the iHeartMusic Festival and top moneymaker Electric Daisy Carnival (an EDM event that injected $1.3 billion into the city’s economy in 2016), the three-day Route 91 Harvest was considered a key expansion to country music fans. Insiders say locals already are talking about how to beef up security protocols for the city to rebound. “Now we’re going to have to assume this scenario is a possibility,” says Las Vegas performer Marc Savard, who was staging his Comedy Hypnosis show at Planet Hollywood when the Strip went into lockdown Oct. 1. “You can say, ‘Oh, my God, this happened in my backyard,’ but honestly, I’m surprised that it hasn’t happened before.” 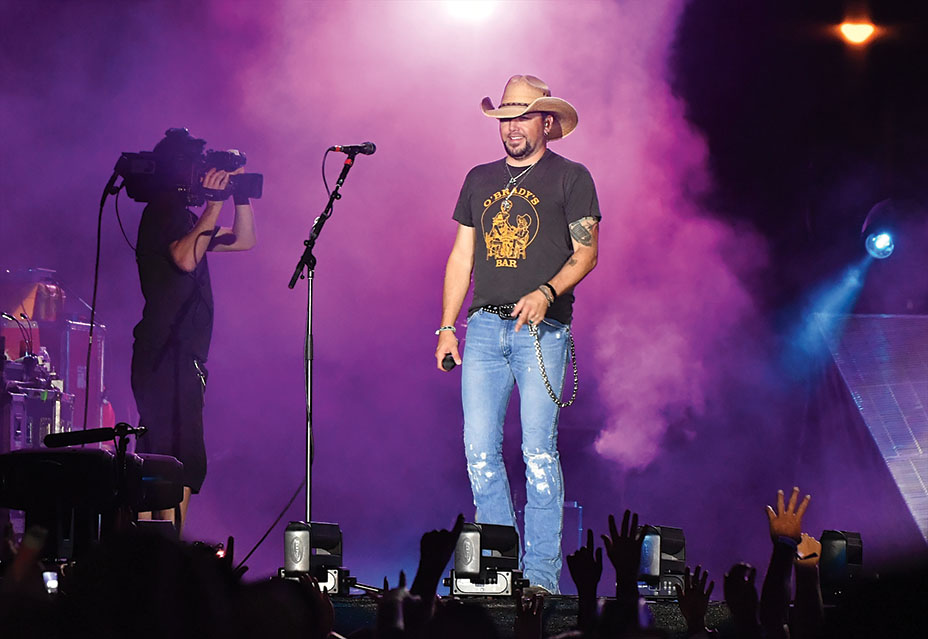 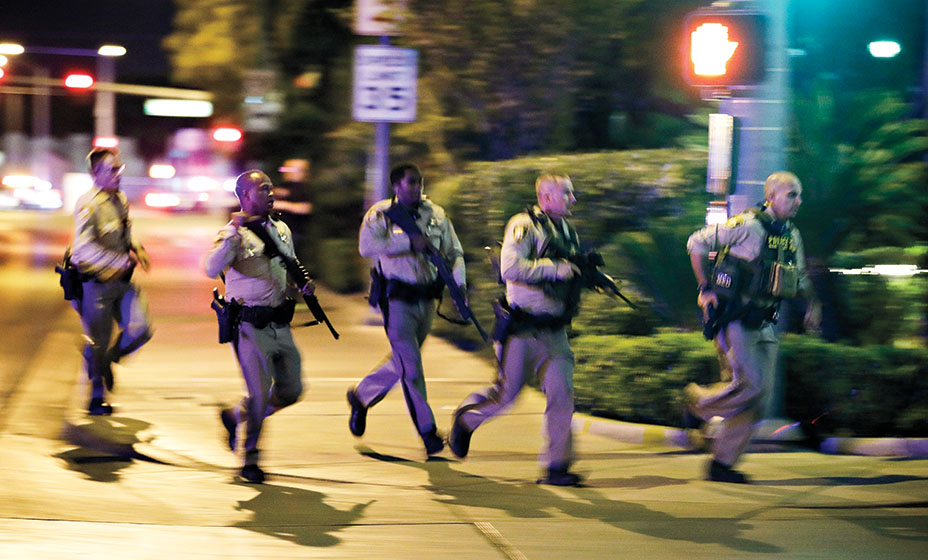 Las Vegas has faced tragedy and bounced back before. The MGM Grand and Las Vegas Hilton fires of the early 1980s — referenced by native Jimmy Kimmel in a gut-wrenching ABC monologue Oct. 2 — killed hundreds and led hotels to implement some of the nation’s strictest fire codes. The Sept. 11, 2001, terrorist attacks forced changes at the city’s Strip-adjacent McCarran Airport and upgrades to its surveillance systems. More recently, a 2015 incident in which a woman steered her car onto a crowded Strip sidewalk, killing one person and injuring 34 others, gave Clark County commissioners reason to install steel posts strong enough to stop high-speed vehicles on sections of Las Vegas Boulevard. Notes Savard, “If the tourists don’t feel safe, they’re not going to come, and we have to send a message to the rest of the world that it’s safe to come to Las Vegas.”

Indeed, just 24 hours after the shooting, business largely had returned to normal on the Strip, though several live productions, Steck’s included, went dark for the evening. “[We did it] just out of respect for what happened,” he explains. Cirque du Soliel shows also were canceled for the night but resumed. Savard, deciding the show must go on, returned to his V Theater stage at 10 p.m. “Everyone mourns in different ways, and some people mourn, maybe, by disconnecting from reality a little bit,” he says. “I can’t go down to a hospital and contribute in the [emergency room] because I’m not a surgeon — I can only do what I can do.”

Adds Steck: “Look what happened in Orlando,” referencing the 2016 Pulse Nightclub mass shooting that killed 49. “It’s not stopping people from going to Orlando. I would actually predict a massive Las Vegas benefit concert [on the Strip]. Everybody’s going to come here to show the world, ‘Hey, we’re not afraid of anything.’ “