“I was very conscious that this film had to appeal to all ages, because I was 4 years old when I saw the original,” says three-time Academy Award-winning costume designer Sandy Powell of her wildly vivid costumes for Disney’s Mary Poppins Returns, opening Dec. 19. “I wanted each person to have a very significant look, like in a children’s picture book.”

Set in Depression-era 1930s London (when the P.L. Travers books were set originally, as opposed to the Edwardian-era 1910s, when the 1964 Julie Andrews film was set), the live-action musical sees the return of Mary Poppins (Emily Blunt) to the Banks household, only this time it’s Michael Banks (Ben Whishaw), now a grown man who lives with three children of his own, plus sister Jane (Emily Mortimer).

London is in the midst of “the great slump,” so money is scarce and anxiety is heightened, with Banks in danger of losing his home to the same bank (featuring greedy pin-striper Colin Firth) that employed his father and grandfather before him. Into this scenario, the magical, problem-solving nanny arrives to restore wonder, with help from jolly lamplighter Jack (Lin-Manuel Miranda). 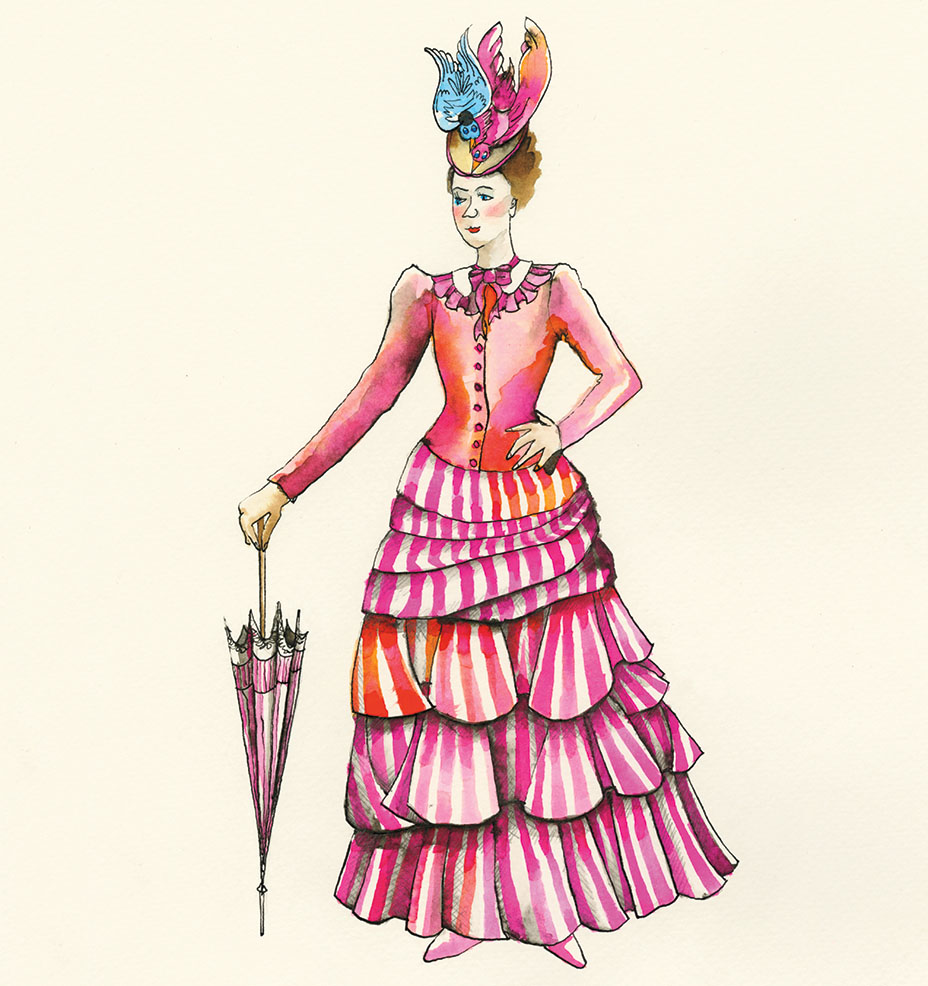 Powell’s approach to dealing with the legacy of the film was the watch it once, then move on to making 448 original costumes from scratch. “The only time I really alluded to the original was for Mary Poppins’ arrival outfit, which had a similarity to the original, but for 1934, and to appeal to a contemporary audience,” she says of the mid-calf-length belted coat with a short double cape, hand-crafted Art Deco buttons and belt buckle, accessorized with a red straw hat decorated with a robin, red leather gloves and shoes, and a carpet bag referencing Art Deco carpets. She points out that the elongated Edwardian silhouette is not unlike that 1930s silhouette, reflected in Poppins’ slim coats and skirts worn with whimsical dot blouses and scarves.

“It was only when I put on her beautiful costumes and tilted the hat to the saucy angle Sandy insisted it be at that I truly felt like the character,” says Blunt, who also worked with Powell on 2010’s The Young Victoria. “She was incredibly collaborative too, interested in every idiosyncrasy I wanted to bring to the character. She welcomed and blended the eccentricity and the vanity of Mary in such a fab way.” 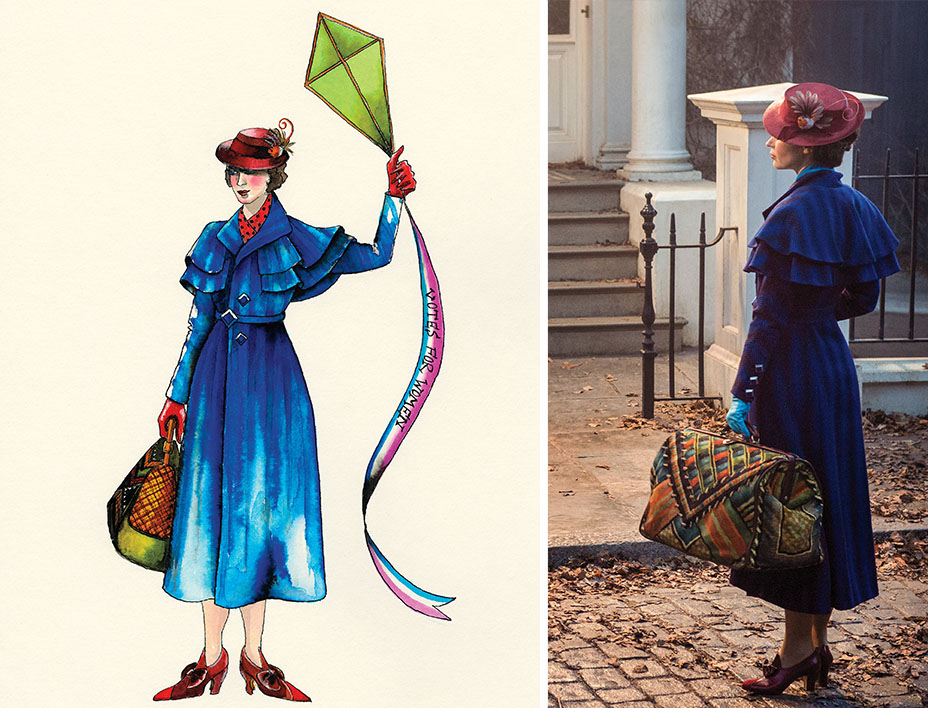 Together, Poppins and the children embark on a series of Technicolor fantasy adventures, including the Royal Doulton China sequence, during which a broken china bowl becomes a portal into a world referencing the original film’s groundbreaking combination of live action and animation, with Blunt, Miranda and the children wearing jaw-droppingly beautiful hand-painted costumes in candy pastel hues combining 2-D and 3-D elements that look like the world around them.

“It was one of the first things I thought about when I talked to Rob Marshall about the project, was how to bring a nostalgic style to the scene in an old-fashioned, hand-drawn way,” says Powell, who cut each costume out of cotton canvas or calico, then handed it over to her dye department, but not before contacting the animators at Disney to make sure her team was painting the garments with the same depth of tone and wash to match the animation onscreen. “We had to get ahead designing the costumes for the animated sequence so the animators could start building animation around them. It was exciting and risky, and I love the fantasy effect.” 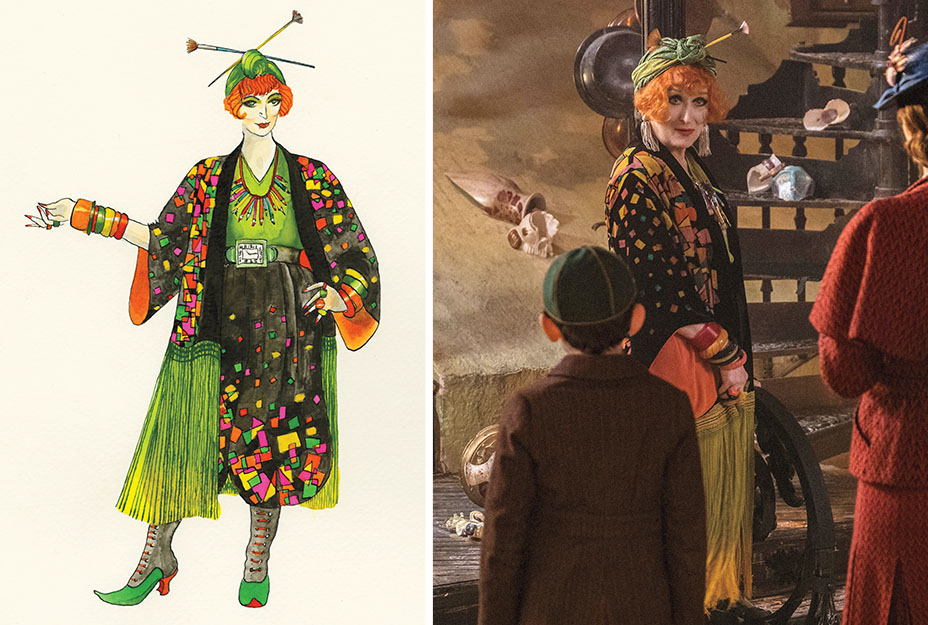 Another adventure takes the characters to the fix-it shop of Mary’s eccentric cousin Topsy (Meryl Streep), a bohemian type who, says Powell, “for some reason is of Eastern European origin” and wears harem pants, a colorful velvet kimono, armloads of bangles and a turban, a look inspired by the personal styles of real-life bohemian artist types Edith Sitwell and Nancy Cunard, among others. “We played around with kimono shapes with fringing on the bottom. I wanted bright color on black, and we looked at samples from the 1920s and ’30s. But we ended up doing a discharge print on velvet devore that we then hand-painted. It took the longest to make of anything in the entire film, and we made seven of them to have multiples. It really is couture.” 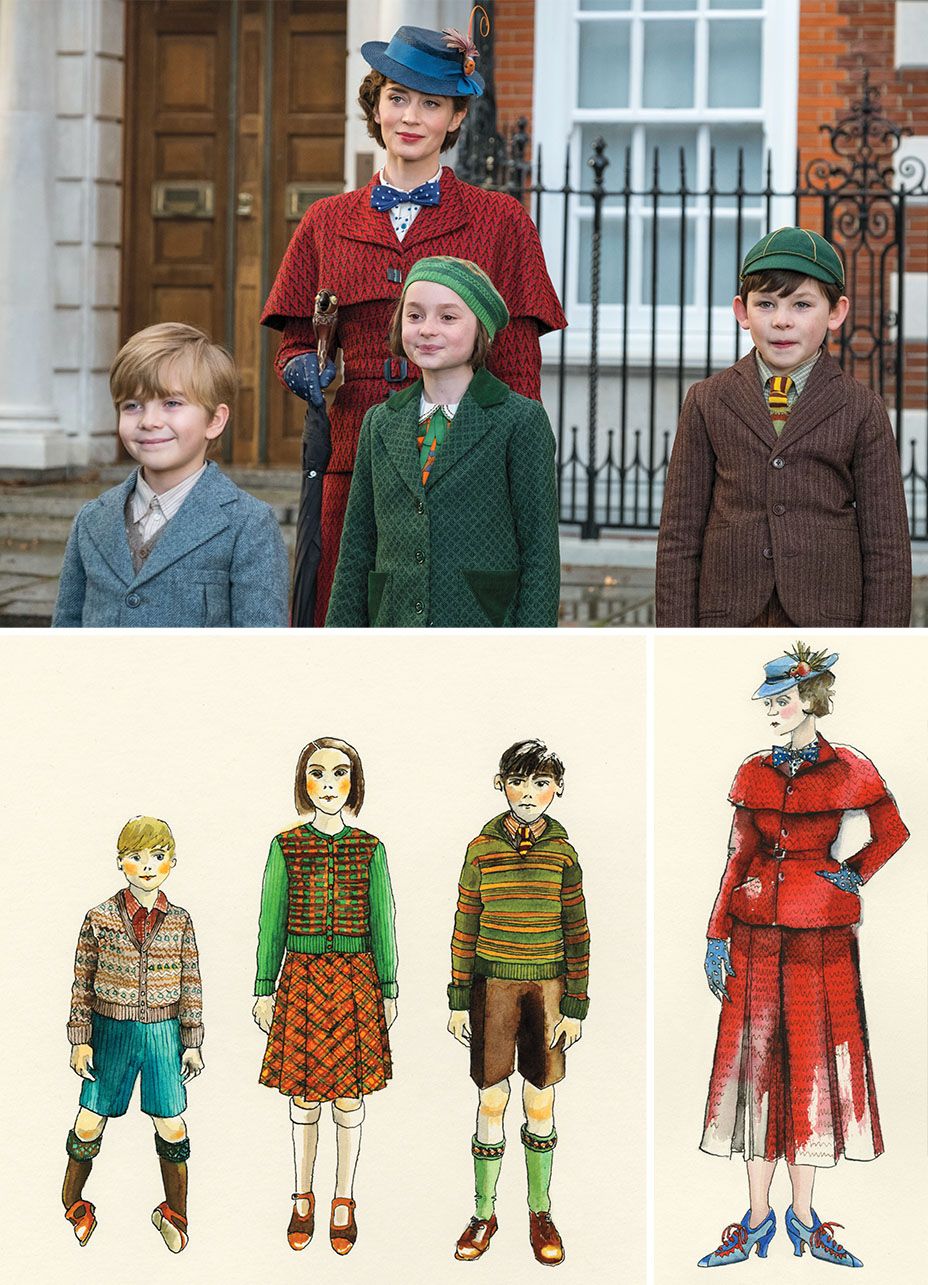 But ever the stickler for historical accuracy, Powell, whose next project is Gloria Steinem biopic The Glorias, did not look at the contemporary cutie for inspiration: “No! I looked at images of real children in the 1930s!”

A version of this story first appeared in the Nov. 28 issue of The Hollywood Reporter. To receive the magazine, click here to subscribe.