The city seen in Sony’s Once Upon a Time in Hollywood is a lot different from the Hollywood of today. The neon marquees have given way to LED screens, tall towers are actively changing the city’s landscape and traffic prevents any Angeleno from zooming through the city as quickly as Brad Pitt’s Cliff Booth. But while Quentin Tarantino’s film serves as a historical document (albeit one with a revisionist bent, presenting a hopeful future for Margot Robbie’s Sharon Tate), it also does something that preservationists have struggled to accomplish: It helps protect Hollywood’s landmarks from destruction and the slow fade into forgotten memory.

For his love letter to Hollywood, Tarantino strove for authenticity without the use of CGI. Production designer Barbara Ling, who earned her first Oscar nomination for the film, had to re-create numerous locations that are no longer standing. “You can’t really be too strict and by-the-book in Los Angeles anymore,” she says of shooting on location in Hollywood, where many of those locations had to be reimagined. “It’s a town that just never really preserved its history.”

An L.A. native, Ling relied on her own memories of being a teenager in 1969 in order to evoke the era’s essence, which is exactly how Tarantino wanted to approach his film that takes place in an alternate timeline. “Quentin always said, ‘We’re not making a documentary,’ ” she says. “We wanted to capture what it felt like.”

That explains, then, why the hippie hotspot Pandora’s Box — closed in 1966 and demolished a year later — is the backdrop for a scene in which Cliff spots Manson Family member Pussycat (Margaret Qualley) hitchhiking for a ride back to Spahn Ranch. But also anachronistic was the scene’s shoot, miles east from the nightclub’s original location on the Sunset Strip. Ling bemoans the Strip’s extreme evolution over the years into a mecca of glass towers, especially since she was the production designer on Oliver Stone’s 1991 biopic The Doors. “They’ve torn down everything,” she laments. “The Whisky a Go Go is still standing, but everything else [is unrecognizable]. You can’t really shoot anything on the Sunset Strip anymore.” 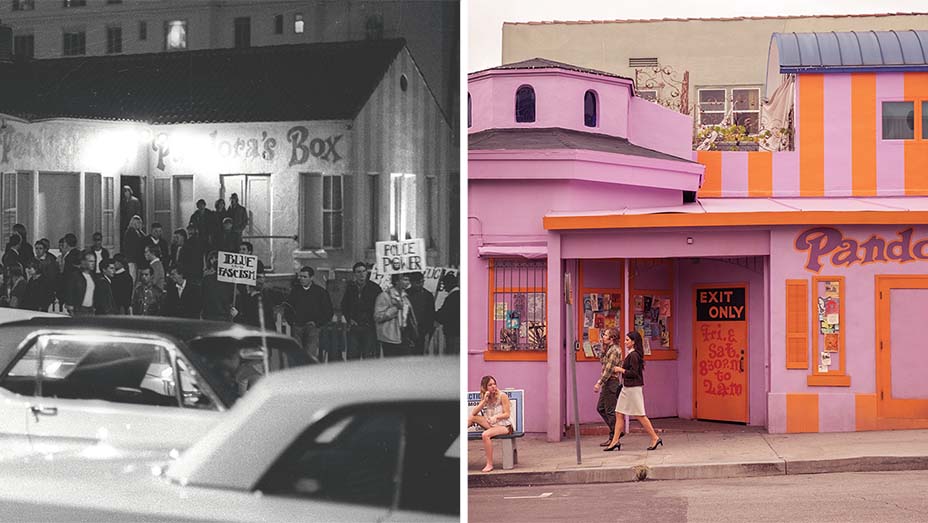 Ling says Once Upon a Time often raced against developers who were actively tearing down buildings the production hoped to shoot. The former Earl Carroll Theatre on Sunset Boulevard is one example. Ling and her team re-created the large mural that was painted on the building’s facade when it was rebranded the Aquarius Theater in 1969 to coincide with an L.A. production of the musical Hair. The production narrowly managed to save the facade facing Sunset (the Aquarius mural is still visible today) as parts of it were demolished to make way for a tower next door. As producer Shannon McIntosh tells THR, “We started shooting this movie at the very right time. … I’m astounded when I drive around L.A. how much construction has happened since we shot the movie.”

Hollywood is a town built on fantasy and make-believe, and its founding just over a century ago was relatively recent compared to the country’s most historic spots. For film historian and archivist Marc Wanamaker, who maintains the Bison Archives photographic collection and has consulted on L.A.-set films over the past five decades (including Chaplin, L.A. Confidential and La La Land), promoting Hollywood’s history has been a lifelong mission. And he’s often faced with an existential question: ” ‘Why should we save some of these places? Oh, you’re living in the past. Why is it so important?’ Because it gives a layer of culture to where you live. It is rooted in the past, of other people’s accomplishments,” he says.

Wanamaker — nephew of Sam Wanamaker, who appears as a character in Once Upon a Time directing the Lancer episode featuring Leonardo DiCaprio’s Rick Dalton — acknowledges the transient nature of Los Angeles, and Hollywood in particular. He describes the latter as a “factory town,” with the magic of moviemaking the product churned out by its workers. But he hopes that doesn’t reduce some of its iconic landmarks — particularly the old studio buildings that served as the factories themselves — to pieces of ephemera. “It’s a constant battle,” he says, calling out Amazon and Netflix as specific foes. “They would like to demolish the old studios of Hollywood. [Amazon] has already demolished most of the old Culver studio, which is where King Kong and Citizen Kane [were filmed] — the whole studio is gone except for the administration building in the front.” Meanwhile, Wanamaker hopes to protect the original Columbia studios, now occupied by Netflix at Sunset Gower Studios. “These are businesses, not museums,” he concedes. “But we’re trying to compromise and save the buildings. It’s up to the people buying the property to want to be interested in saving a portion of their historic fabric.”

The irony, Wanamaker notes, is that the original studio heads in Hollywood were, in fact, obsessed with history. The still-standing administration building at the Culver studios was modeled on George Washington’s Mount Vernon; when the Selig Polyscope Co. built the first movie studio in the Edendale neighborhood in 1909, its exterior design was taken from Mission San Gabriel. “[The country’s] history was reflected in the sites and their architecture,” Wanamaker says, adding that Paramount “has a triumphant [Roman] arch leading into the studio.” 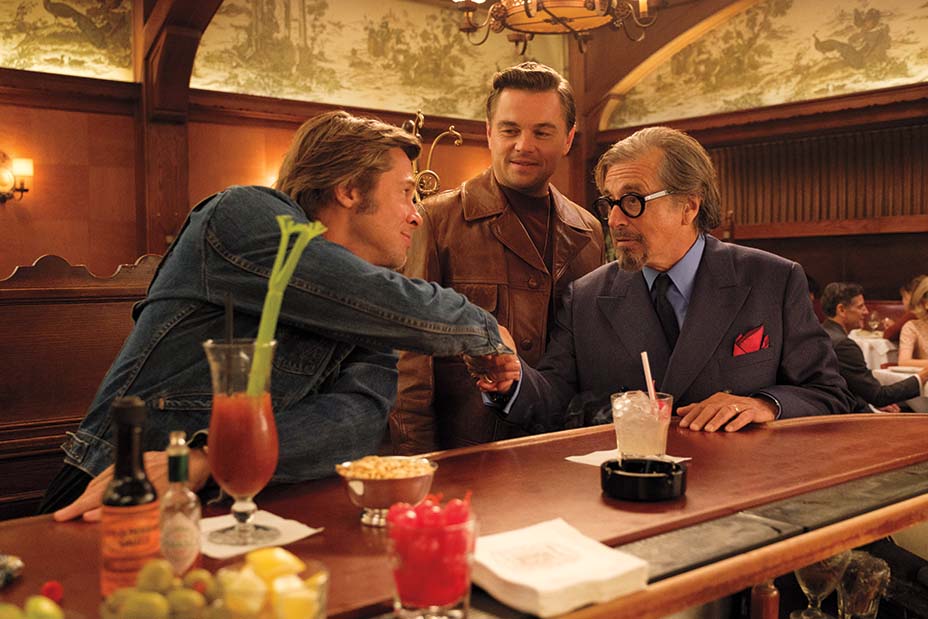 One of most famous locations that has since been lost to time was the Babylonian set from D.W. Griffith’s epic silent feature Intolerance. The Great Wall of Babylon, with massive elephants towering over the corner of Hollywood and Sunset boulevards, stood for three years following the film’s release in 1916. Today, an homage to the film — and the once-crumbling Babylonian set, which was eventually razed to build the Vista Theatre (which hosted Oscar-qualifying runs of Netflix’s Marriage Story, The Two Popes and Dolemite Is My Name in the fall) — can be seen at the Hollywood and Highland shopping center. The massive arch with Babylonian-inspired design is a small concession for Wanamaker, who consulted with the development’s architects. “The roots of Hollywood were in that set — the first major epic film to build sets 120, 130 feet high,” he says. “There was a Hollywood here of great importance, which helped create the film industry as we know it today.”

As Hollywood changes, culturally and physically, its own history — which was arguably never intended to stand forever — is at risk of fading away. But movies can provide historical context in the form of entertainment, even if films like Once Upon a Time in Hollywood play around with the facts. “It’s incredibly gratifying to see that someone like Tarantino is utilizing Hollywood history in a film,” Wanamaker says. And while the film may also inspire audiences to discover movies like The Wrecking Crew and TV shows like Lancer and The F.B.I. thanks to their inclusion as narrative devices, Barbara Ling is also hopeful that Once Upon a Time will bring a newfound interest to the locations she helped preserve on film forever. “With any luck,” she says, “people will start wondering why we aren’t saving these places.”