Jeremy Garelick was set to start filming on the eighth feature under his American High production banner in Liverpool, New York, when Gov. Andrew Cuomo issued the state’s shelter-in-place order March 20, shuttering all nonessential business operations amid concerns about the spread of the novel coronavirus.

“Everyone was there and ready to go. Then the virus shut us down,” says Garelick, the writer-director behind comedies like The Break-Up and The Wedding Ringer, who founded the shingle in 2017 in a partnership with Mickey Liddell’s LD Entertainment. American High focuses on high school-set content, working out of an old Syracuse-area high school, where they have since filmed seven features in two years, including recent release Big Time Adolescence starring Pete Davidson.

While reading the local news for updates on the region’s coronavirus efforts, he came across a story about a local 3D printing company that had designed and begun manufacturing face masks for area medical workers who were in short supply of personal protective equipment, or PPEs. Says Garleick, “I immediately reached out.”

“We were thinking about what we could do to help up here because we know most of the resources will go to New York City and the major metropolitan areas,” says Isaac Budmen, the founder of Liverpool-based Budmen Industries, which manufacturers personal 3D printers. With his partner Stephanie Keefe, Budmen created a template for 3D printed face masks that could be worn by medical professionals at nearby testing sites in Syracuse that would curb their risk of contracting coronavirus. They set to work on troubleshooting the design and assembling a small batch.

Using eight printers out of their home’s basement, the couple made 50 masks in 24 hours. After dropping off the first donation of face masks, they received a call from Onondaga County executive Ryan McMahon’s office asking for 300 more. And once Budmen’s story and design template started circulating around the Internet, requests started to pour in through the company’s website from states, cities and hospitals across the country. He says, “All of a sudden we started getting requests from Brazil and Chile and Seattle and Albuquerque from health care workers.” The most frequent requests they got for face masks were from individual, frontline medical workers.

It was while Budmen and Keefe were figuring out how they could scale up operations to meet the ever-growing demand that Garelick made his call. “He said we have a bunch of moviemaking folks that are great at logistics,” recalls Budmen.

Garelick is currently self-isolating with his family back in Los Angeles and homeschooling his four kids, all under the age of 10. He brought on American High’s production head Will Phelps and Syracuse Studio’s Molle DeBartolo to assist with on-the-ground operations, and put out a call to his network in the area. “We immediately got lots of volunteers — people from our crew and actors, who we had locally cast and had worked with us previously,” he says.

The Greater Syracuse Soundstage, which sits next to the high school owned by American High and is used in all of the company’s productions, has become the headquarters for the partnership. A team of 50 volunteers is currently manning the soundstage, working four-hour shifts while maintaining a distance of at least six feet apart. Since March 23, the 50,000-square-foot facility has housed 15 printers operating 24 hours a day, seven days a week. Additional parts are coming in to the soundstage from 30 at-home printers around the upstate New York area.

A mask — from print to assembly — takes on average an hour to make. Budmen estimates that the current cost for the construction of a face mask is $3.90. About $20,000 in donations have allowed the Budmen and American High’s mask-making operation to keep going, with the money going directly to the purchase of raw materials. 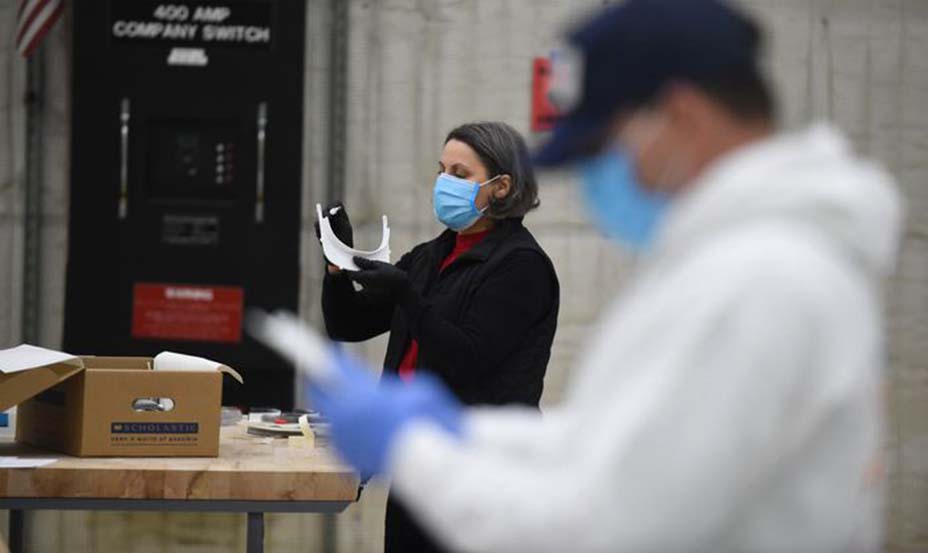 Budmen and the team at American High have made 2,000 units as of March 30. By the week’s end he estimates the facility will have fabricated and delivered nearly 5,000 face masks. Their current global requests number 260,000.

Along with health care workers asking for masks, there’s another group reaching out in huge numbers to Budmen — fellow 3D printer owners. They began asking for Budmen and Keefe’s design templates hoping to make the masks for their local hospitals. Closing down their business operations for the time being, the Budmen website is dedicated to register people in need of shields and those who can print them, while a team of volunteers works to match the requests that are in the same area.

Budmen directs anyone interested in producing protective equipment through personal manufacturing to read recently released FDA guidelines for PPE. For those without printers he suggests looking for printing and manufacturing operations that are popping up throughout the country, like the New York City printing operation currently running out of 92nd Street Y on the Upper East Side using Budmen’s face mask designs. He says, “Offer to do assembly or deliveries. If you can, provide materials or sandwiches and snacks for the volunteers. This is a grassroots American effort to help in what is a pandemic hitting everybody.”

For his part, Garelick is hoping to recruit those in the Hollywood community. “We are trying to figure out how to use our network and resources to get film companies to replicate exactly what we are doing,” says Garelick. American High and Budmen Industries have put together an 11-step guide for anyone looking to set up their own printing operation, which is currently available on the American High’s website. “If you have any empty soundstage, we can help you navigate how to orchestrate this thing,” he says.

While setting up the face mask operation, American High was in the middle of releasing two features — Big Time Adolescence and Banana Split — in theaters. “Big Time Adolescence was set to be released the day they decided to shut down all movie theaters,” Garelick notes. Pivoting due to cinema closures, both movies are now available on VOD and streaming, with Hulu pushing up the release date for Big Time Adolescence by a week for audiences that are now being ordered to stay in their homes. While having to push the films’ theatrical release was a disappointment, Garelick recognizes, “people need entertainment and they need content right now, and we were providing content at that exact moment.”

Like American High, many entertainment companies have had to suspend or alter operations. From studio tentpoles to indie features to network television series, productions have been suspended due to the global pandemic, leaving Hollywood to figure out how to adapt to help in the battle against the coronavirus. In a March 26 press conference, L.A. Mayor Eric Garcetti said that local soundstages could be used should the city need to secure space for hospital beds or quarantine units. He confirmed that “some folks from studios have reached out” about that prospect.

When asked what his advice for entertainment companies that may be interested in establishing printing operations like his, Garelick offered, “I want to really get across that what we are doing is not daunting.”

“Our theory at American High is just ‘Go,'” he says. “I am not a scientist at all — I trust other people to explain new technologies to me — but I have an amazing team and I can gather that team to focus on a job.” And the job, for now, is making face masks. 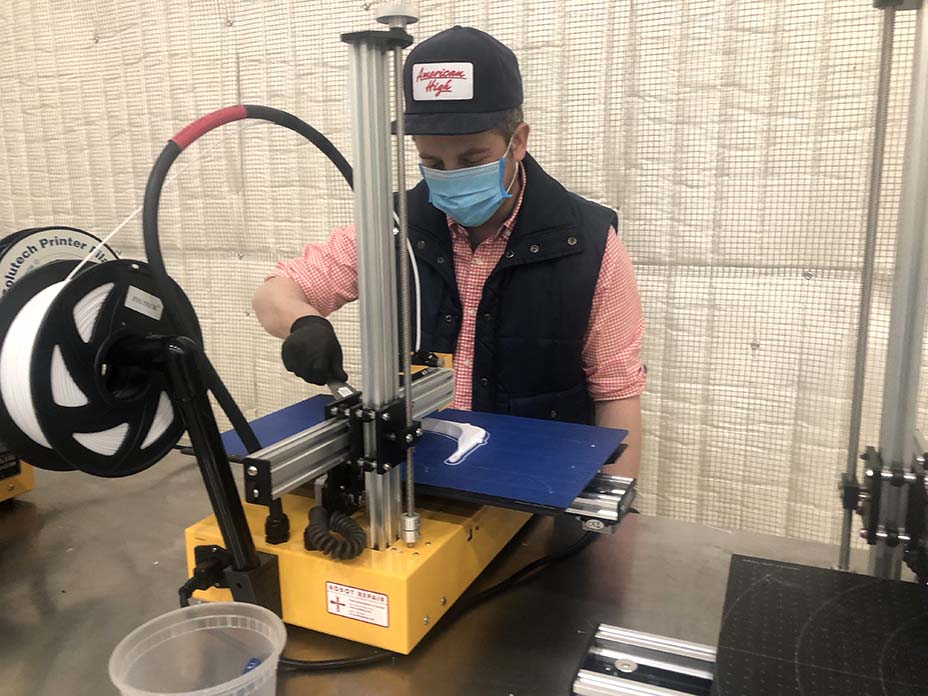