With men’s red-carpet fashion choices proving to be at least as hotly newsworthy as the style selections of their female counterparts this awards season, the just-wrapped fall-winter 2019 men’s fashion shows from the heavy hitters in Milan and Paris offer plenty of provocative tux choices for the Oscar nominees announced Tuesday.

Of course, style-watchers are probably already crying over the absence of Timothee Chalamet from the Academy’s list, given his glam turn on the Golden Globes red carpet in a bejeweled harness from Louis Vuitton, quickly followed up by his fashion-forward, multicolor brushstroke-pattern suit from Alexander McQueen, accented with white “dad” kicks at the Critics’ Choice Awards.

That moves Bohemian Rhapsody star Rami Malek into fashionista first-position for the Oscars — fitting, given his role as the flamboyant Freddie Mercury. Malek has never been hesitant to make a strong statement — look at the bright cobalt blue Dior he wore at the film’s Tokyo premiere or his more recent blood-red Berluti suit at the L.A. Online Film Critics Awards, a preview of the scarlet-and-shocking-pink-tinged lineup at the Paris house’s show just days later. 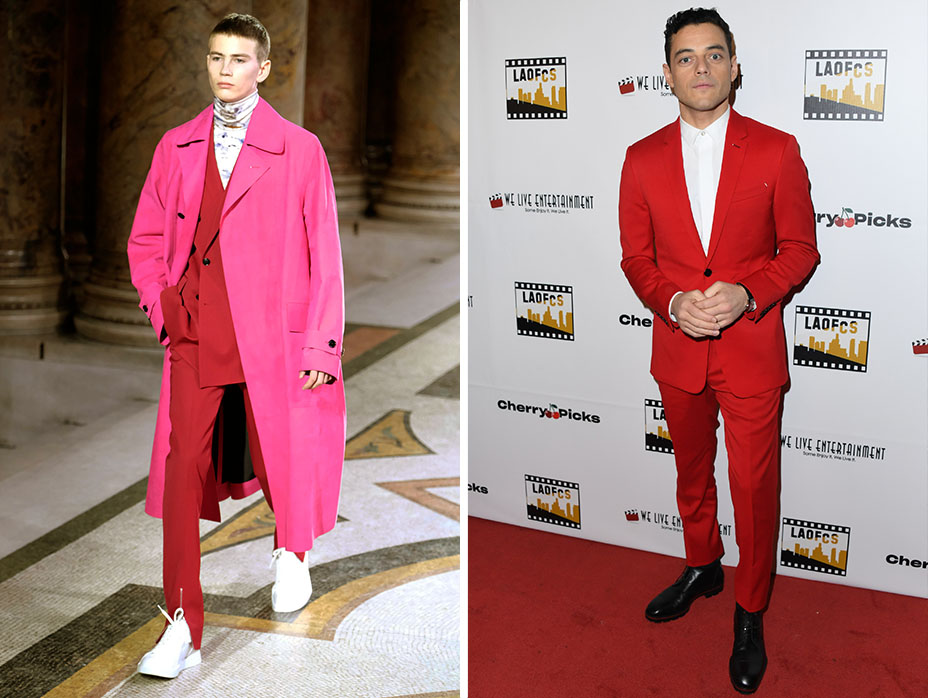 So, for the Oscars, why doesn’t Malek just go for the best actor gold and don a gilded brocade tux as shown in Dolce & Gabbana’s Milan show. Though the designer duo has been in red-carpet fashion jail since their recent China debacle, their 128-look collection firmly rooted in a cinematic cavalcade of uber-luxe masculine style might spring them from the Hollywood hoosegow. Just tell them to stay away from social media. 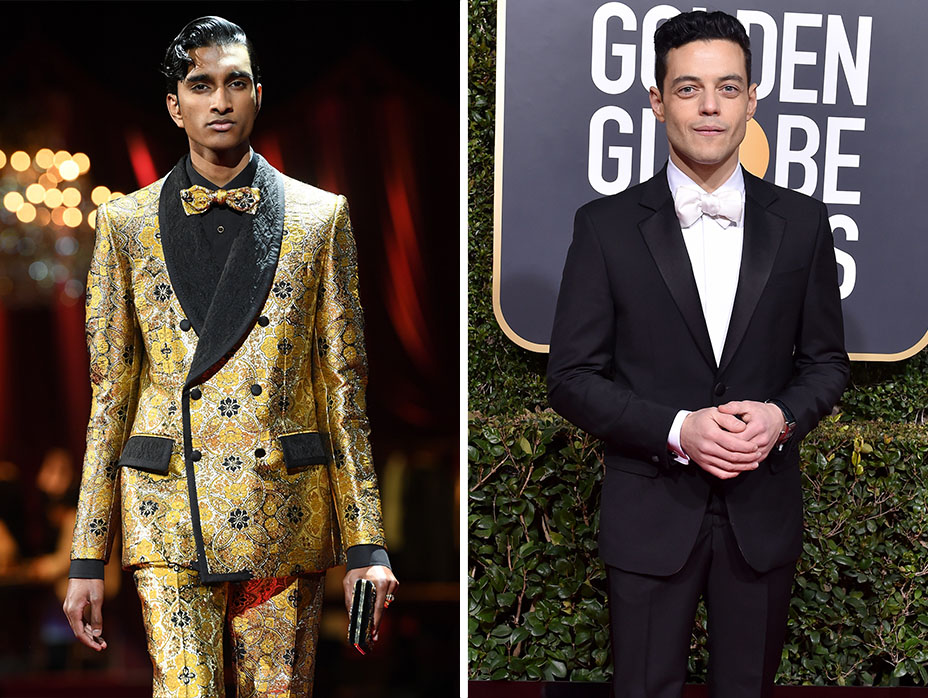 Another hot Oscar style contender has to be nominee Mark Ronson, co-songwriter of Lady Gaga’s “Shallow” and also a fixture in fashion circles ever since his modeling days in the ‘90s. He seems the perfect avatar for much-debated designer Hedi Slimane’s glam Berlin-by-way-of-Bowie collection for Celine. Ronson could rock Look 45, a windowpane sequined jacket in New Wave black and white, with a skinny tie and cropped trousers, cut with Slimane’s newly eased-up hand. And the songwriter’s signature pompadour makes for a much better grooming match than the fashion show’s grim-looking bowl cuts. 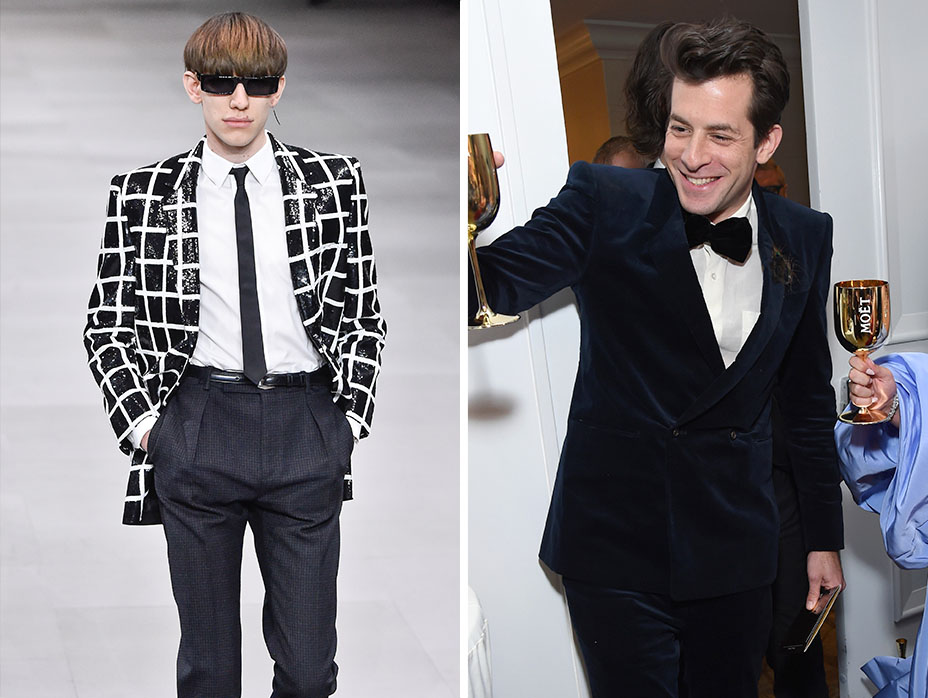 With Bradley Cooper failing to earn a best director nod, maybe he should summon up more of the rock star persona of his Star Is Born alter ego Jackson Maine in one of Tom Ford’s Rorschach-inkblot-print dinner jackets, complete with black turtleneck and wraparound dark shades for that just-out-of-the-back-of-the-limo look. Cooper has worn Ford’s clothes often in the past, and the tux look was a standout at the Milan menswear preview in advance of Ford’s coed fashion show next month in New York. Who else but the director/designer would allude to Hollywood’s neuroses with a psychological test pattern reworked as opulent formalwear?

Master of cool Mahershala Ali would be a prime candidate for Clare Waight Keller’s razor-sharp tailoring for Givenchy, which she summoned for next season with a new fluidity that ended in pooling bell bottoms. A subtle call-out to the days of Green Book, her full-length formal coat could translate as “movie star,” and the white turtleneck has an effortless formality that definitely suits Ali. (Evening turtlenecks haven’t been seen in such profusion since the swingin’ ’60s, turning up on runways everywhere.) 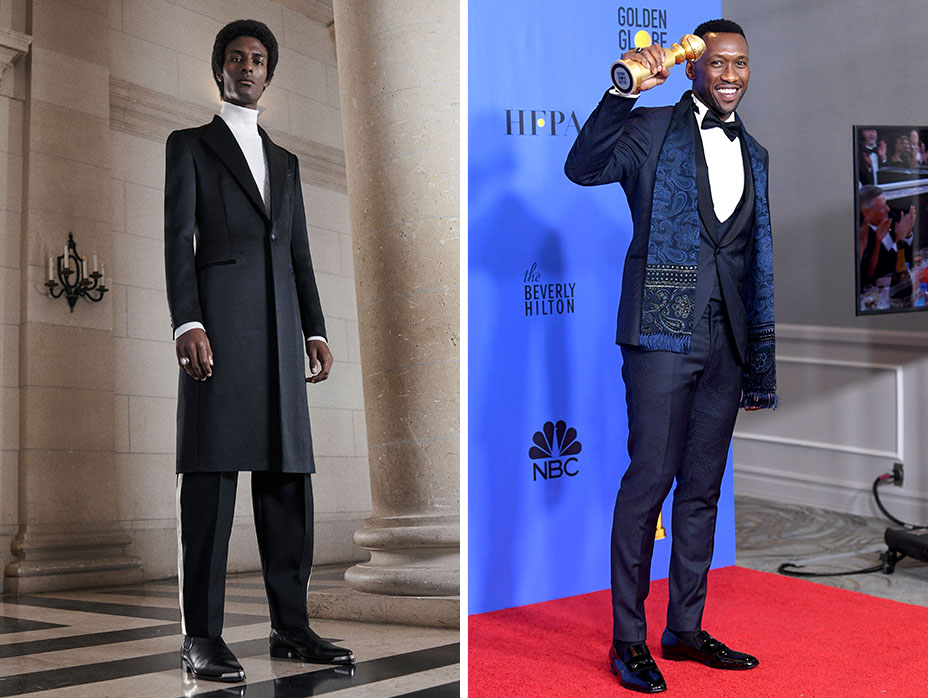 If there was a stealth show on the final day of Paris Men’s Fashion Week on Sunday, it was London’s Dunhill, with a brace of trendsetting young male stars in attendance including Malek, Riz Ahmed, Ben Hardy, Joe Cole and Joe Alwyn in the front row. But the look that resonated for, say, best actor nominee Christian Bale, who will probably stride to the winner’s podium with nothing left to prove, was the double-breasted tuxedo — a notable example of the loosened-up tailoring that was the big news all around over the runways. Worn with a louche silk shirt and, yes, a blue-violet cummerbund, it’s a glamorously disheveled, 180-degree turn from his sinisterly buttoned-up Dick Cheney in Vice. 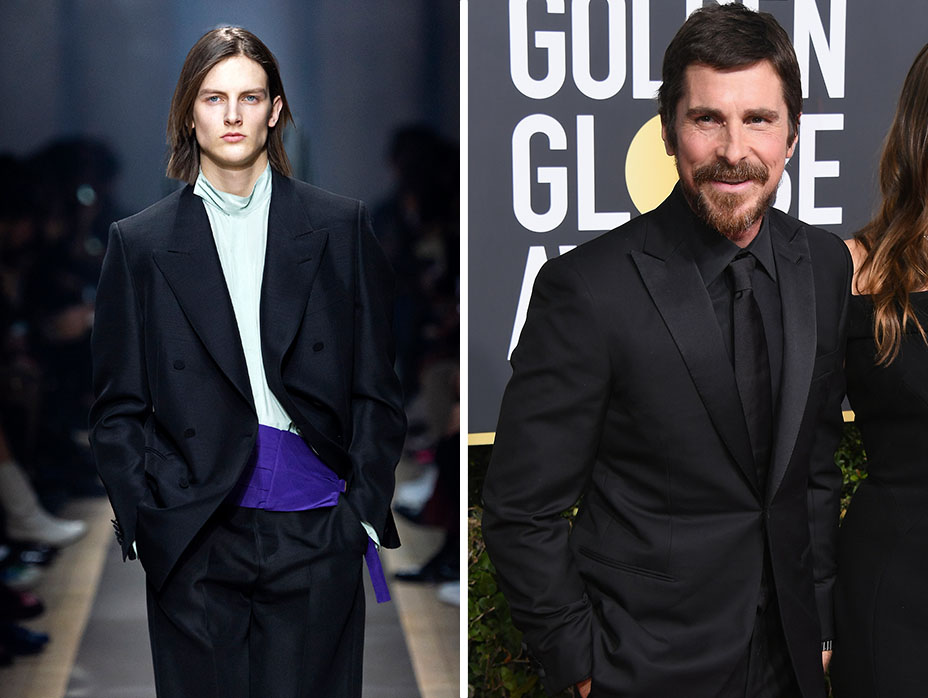