The London brand founded in 2010 by Australian designer Tamara Ralph and business partner/boyfriend Michael Russo is part of a new red carpet vanguard of houses built from the ground up, along with fresh names renovating old stalwarts.

“Couture was so Parisian-concentrated, we saw a niche in the market,” says Ralph, who used word-of-mouth to build her customer base for hand-crafted gowns that can top $500,000. Her first Hollywood client was Angelina Jolie, who chose to wear a demure dove-gray dress to meet the queen. Meghan Markle went with Ralph & Russo for her engagement photos. “Every other house has 100 years of heritage. We wanted to be a modern-day global luxury brand,” Ralph explains.

With 300 seamstresses working in its Sloane Street atelier, Ralph & Russo was the first British label in 100 years to be invited to show on the official Paris haute couture schedule in 2014. It expanded into ready-to-wear in 2017 and also sells accessories, such as the Eden shoes with metal vine leaves on the heels. “Their work is impeccable, every stitch, the fabrics, every design, it’s modern and fresh and beautifully made, everything a woman could want,” says Jolie’s stylist Jen Rade, who met the founders in L.A. in 2010 when all they had was a box of sketches. “I knew I was seeing something really special.”

Net-a-porter launched the RTW collection exclusively the first season, and it continues to resonate with customers “looking for those pieces that they can’t find everywhere,” says the luxury site’s Global Buying Director Elizabeth von der Goltz, praising Ralph’s “attention to detail,” and noting that the collection is not widely available beyond its London atelier and the NAP luxury site. 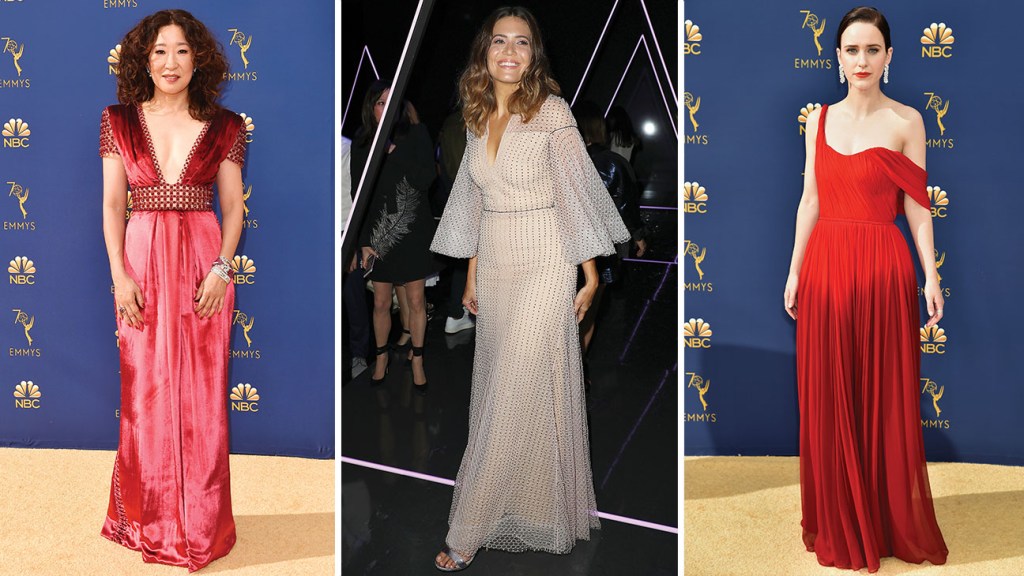 Riccardo Tisci showed his first collection for Burberry during London Fashion Week, including the brand’s first red carpet gowns in all black jersey, draped, cape-backed or trimmed in gold fringe. Although no Hollywood star has worn one yet, some of Tisci’s other designs have already been seeded to Beyonce, Rihanna and others.

Clare Waight Keller is on a winning streak, repositioning Givenchy as a female-led brand by creating Markle’s simply elegant wedding dress in May (and garnering $2.9 million in media value from it), dressing Lady Gaga in a silver lace and velvet cape-back gown for the Sept. 24 L.A. premiere of A Star Is Born, and Emma Stone for Netflix’s Sept. 21 Maniac premiere in a bronze metallic pleated gown that her stylist Petra Flannery says exemplifies the designer’s “feminine yet modern approach.”

And there is no sign of the designer musical chairs and acquisitions stopping any time soon. Michael Kors is buying Versace for $2.12 billion; Louis Vuitton Moet Hennessy announced plans to relaunch the 1930s-era couture house Jean Patou under the direction of designer Guillaume Henry; and L.A.-based Hedi Slimane, late of Saint Laurent, chartered a new vision for Celine, all opening up new possibilities for Hollywood collaboration.

Meanwhile, Ralph & Russo is gearing up for its own rapid expansion, with 10 stores opening by the end of 2019, while continuing to be a go-to for Hollywood stylists. “If we need to drop wedding dresses onto yachts, we make it happen,” says Ralph. “Celebs and stylists know we will not let them down.”