As the stock market roller-coasters and gives up all its 2018 gains, experts and pundits naturally have begun to debate whether the U.S. is headed toward a recession. While discussions of debt levels and yield curves can cause eyes to roll, entertainment workers should pay close attention because, contrary to conventional wisdom, Hollywood is not immune to the laws of economics. “Maybe a recession helps sell alcohol, but not movie tickets,” says Hal Vogel, whose 10th edition of the book Entertainment Industry Economics: A Guide to Financial Analysis is set to be published in 2019.

The stakes are higher than ever. Netflix spent roughly $13 billion to acquire content in 2018 and Amazon is upping its game, but observers say that spending by these and other public digital giants could drop in a recession as stock prices fall and investors clamor for profits: Netflix was down 28 percent between Oct. 1 and Dec. 12 while Amazon was off 17 percent. Problematic for industry workers is not only the prospect of reduced productions but also smaller budgets for the ones that survive, says Peter Tempkins, managing director for HUB Entertainment Solutions, a risk-management firm. “During recessions, people lose their jobs, and some go from full time to part time.”

The notion that movies perform well in times of hardship dates back to the Great Depression. ProfitableVenture, for example, lists 50 industries that it deems “recession proof” should the economy suffer in 2019, and movie theaters are 13th on its list. But Vogel says his analysis paints a different picture: Yes, movie industry revenue was a sturdy $720 million in 1929, but it was buoyed by the transition to talkies. Plus, the stock market didn’t crash until Oct. 29 that year. Revenue grew to $732 million the next year — setting in motion the myth that the industry thrives in a downturn — but it plunged 35 percent over the next three years. Average weekly movie attendance, meanwhile, fell 37 percent between 1929 and 1932.

A look at the most recent downturn is more jarring: During the Great Recession of 2008-10, about 57,000 U.S. workers in the arts, entertainment and recreation sector lost their jobs, according to the Bureau of Labor Statistics, while hiring rates dropped 16 percent, the second-largest decline among 17 industries tracked. Meanwhile, many stocks were more than halved, including shares of Walt Disney, Discovery, CBS and Viacom. Shares of SiriusXM plunged a whopping 95 percent.

Although moviegoing, in particular, is often cited as “recession-proof,” exhibitor Cinemark fell 60 percent. To be fair, the swoon in shares of exhibitors occurred even while movie attendance held its own, but observers say it could be much worse this time around, given that in-home and mobile streaming is far more widely available than it was a decade ago.

“Once people have less disposable income, there are issues like housing and food that require more attention than entertainment,” says Vogel.

Tempkins, though, predicts that movies, and even live events, will be resilient even if television is less so. “People need to get out of their houses. To a certain extent, they need other people,” he says. “Entertainment will adapt, even if it means lower prices. People need a release. Maybe it won’t be dinner, but it will be a movie, concert or sporting event — something to get their minds off the economy.”

Those who predict a U.S. recession — usually defined as two consecutive quarters of falling gross domestic product, and thus at least six months away — point not only to a stock market that has dropped 9.4 percent since a recent high Oct. 21 (a 10 percent loss means stocks are officially in correction mode) but also to a near-flat yield curve. If past downturns are a fair indicator, when the yield curve inverts (long-term rates become less than short-term rates) it will be a clear sign a recession is near. Those who are skeptical of an imminent downturn note that not only has the curve not yet inverted, but the whole concept has lost its predictive power because so many people now understand its implications that financial behavior will be altered en masse.

Just as there’s a debate over whether a recession is coming, there’s disagreement as to the resiliency of the entertainment industry. National Association of Theatre Owners spokesman Patrick Corcoran says that the “box office is not immune to recession — though it is resistant,” and notes that exhibitors saw plunging stock prices even though attendance actually increased slightly in six of the past eight recessions. 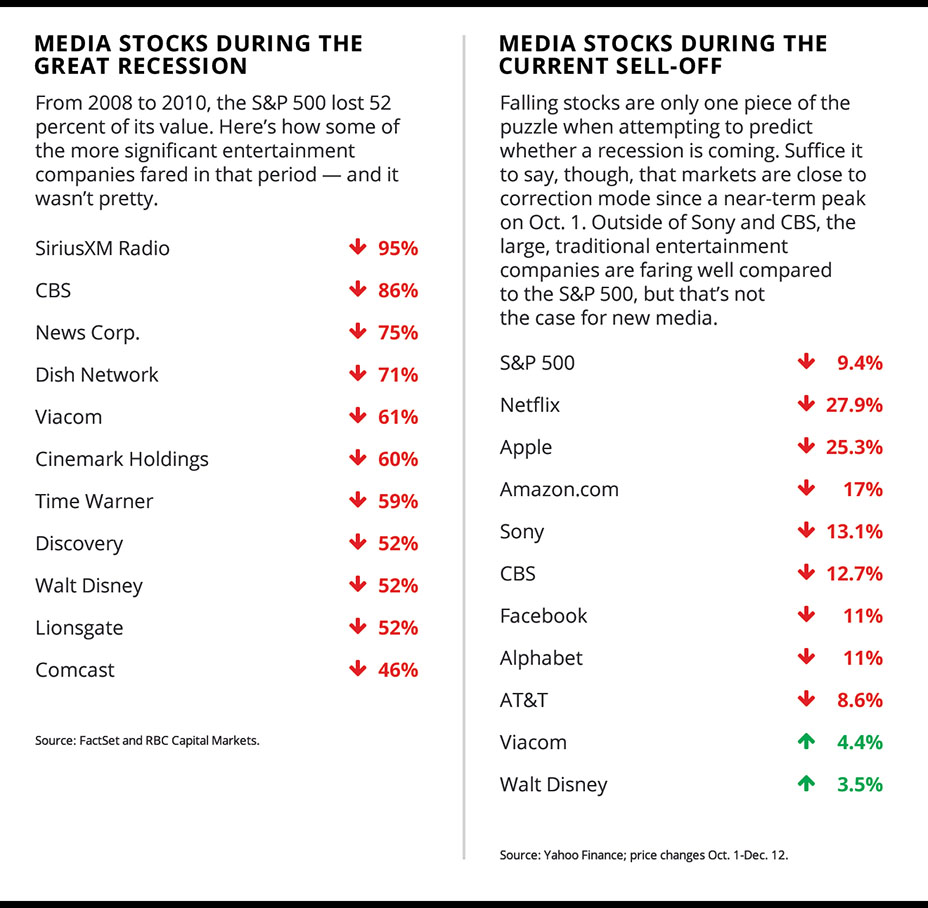 Steven Cahall of RBC Capital Markets predicts that “theater attendance will see limited impact” should a downturn occur, though concession stands will take about a 3 percent hit “as consumers look to save a few bucks by sneaking in their own Junior Mints.”

There’s more unanimity from analysts that the TV industry will suffer should the economy turn south. “A lot has changed in nine years,” says Cahall, noting that digital media was 9 percent of ad spending before the last recession and is at 41 percent today, so its ability to steal away more expensive, less targeted TV ad dollars is much greater.

In fact, TV ad spending already dipped 3 percent to $61.5 billion in 2017 when the economy was strong, even as Nielsen ratings slid as consumers switched to streaming (research firm eMarketer says traditional pay TV subscribers will fall to 169.7 million in 2022 from 205.4 million in 2015). A new recession could sink TV advertising in the U.S. by 20 percent, twice the decline compared to last time. “Cord-cutting is now a thing,” says Cahall.

Therefore, Netflix, Amazon and Hulu could slightly benefit from a recession, and large old-media firms could stem the bleeding by launching their own streaming initiatives, as Disney and AT&T’s WarnerMedia will do in 2019. “It’s also good for broadband, where we think recessionary pressures will be very limited as it becomes more and more important to household happiness due to video, social networking and gaming,” says Cahall. That means broadband provider Comcast could prosper (though its Universal theme parks could wipe out some benefits, just as with Disney, because parks and resorts are “highly sensitive to economic downturns,” says Cahall). Nevertheless, he predicts that Disney, along with Lionsgate and SiriusXM, will weather an economic storm better than other entertainment companies, while AMC Networks and Viacom should fare worse because of their exposure to TV advertising.

Also with history as a guide, toys will do comparatively well: During the Great Recession, Hasbro persevered on sales of merchandise related to Star Wars, Iron Man, the Incredible Hulk and Transformers. 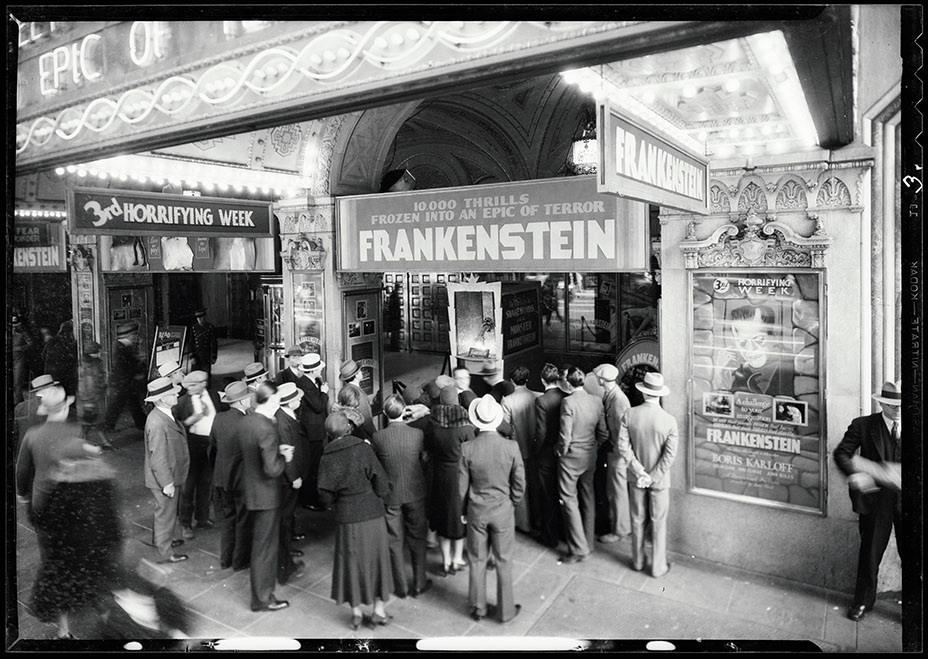