For costume designer Sandy Powell, perhaps the biggest highlight of working on The Glorias — the new feature film about Gloria Steinem at four stages of life — was being invited to meet the feminist icon at home in New York and peak inside her closet. “It was exciting to actually meeting Gloria and ask her questions about her life and her clothes. That was the most thrilling thing. I went to her house and she showed me her closet,” says Powell, who says that Steinem, now 86, lent her some of her belts and jewelry, including rings, to use in costuming the Julia Taymor-helmed film, which was shot in Savannah, Georgia, and which stars Julianne Moore, Alicia Vikander, Janelle Monae, Bette Midler and Lorraine Toussaint. The film is on demand and streaming on Prime Video.

Images of Steinem at various stages of life, of course, were readily available to Powell. “Obviously there is a lot of information on her and she was so well documented, and the film was based on her autobiography,” says the costume designer. The challenge though was that the production’s budget was not large enough for it be possible for Powell to make and replicate every outfit. “I tried to make it as accurate as possible. I had to do a version of what the real Gloria Steinem wore. We had to be very resourceful,” says Powell, who pulled clothes from costume houses including Los Angeles’ Western Costume. The designs, she says, are mostly “a mixture of vintage and repurposed contemporary” items. 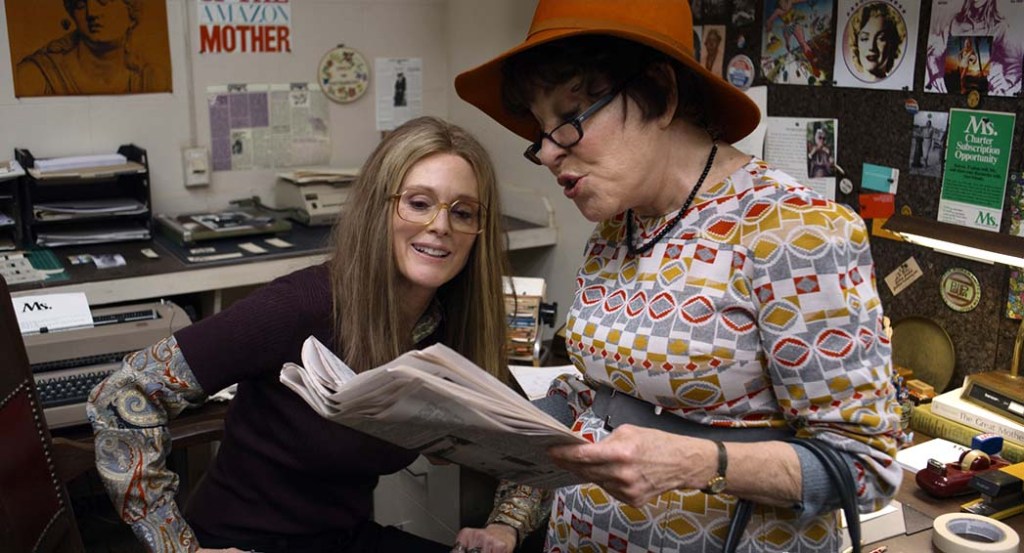 There were two key looks though that demanded being remade as precisely as possible. “There was a particular outfit she wears when she’s giving a talk. She’s with [Ms. Magazine co-founder] Dorothy Pitman Hughes. It’s a little black mini-dress and Julia Taymor wanted me to recreate that one. She’s had to scramble up onto a platform and she has a very short dress on,” says Powell. The other outfit? “Of course, the Bunny Girl outfit,” says Powell, referring to the time when Steinem went undercover, as a journalist, working as a Playboy Bunny in 1963. “It was iconic in a way. We had to create the recreate the outfits.” Powell had them made by the original manufacturer of the Bunny Girl outfits. 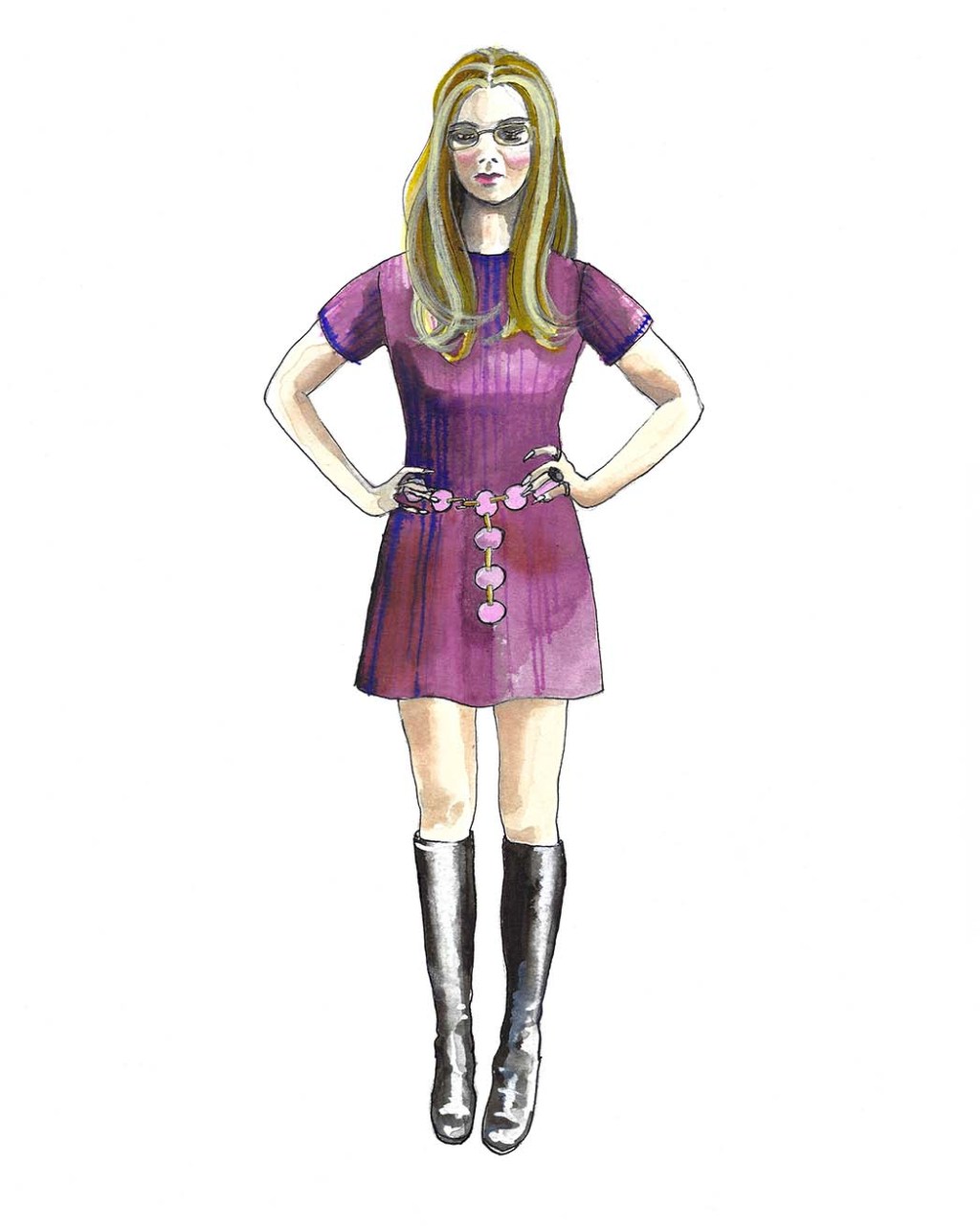 Early on in her career, Steinem was known for her dresses. “She wore short dresses,” says Powell, “and she came in for a lot of criticism by other women for doing that. They thought she couldn’t possibly be a feminist because she was looking sexy. And that had nothing to do with her dressing for men. She dressed for herself. She dressed in what she wanted to dress in.”

Later, in the ’70s, her looked changed, taking on the style she’s most known for today. “Her iconic looks were jeans, black jeans, and t-shirts and belts. She wore very distinctive belts around her hips a lot of the time, even right up to the present,” says Powell. Moore actually wears one of the belts in the film that Steinem lent to the costume designer. “it’s a wide leather belt with a great big silver oval-shaped buckle on it.” 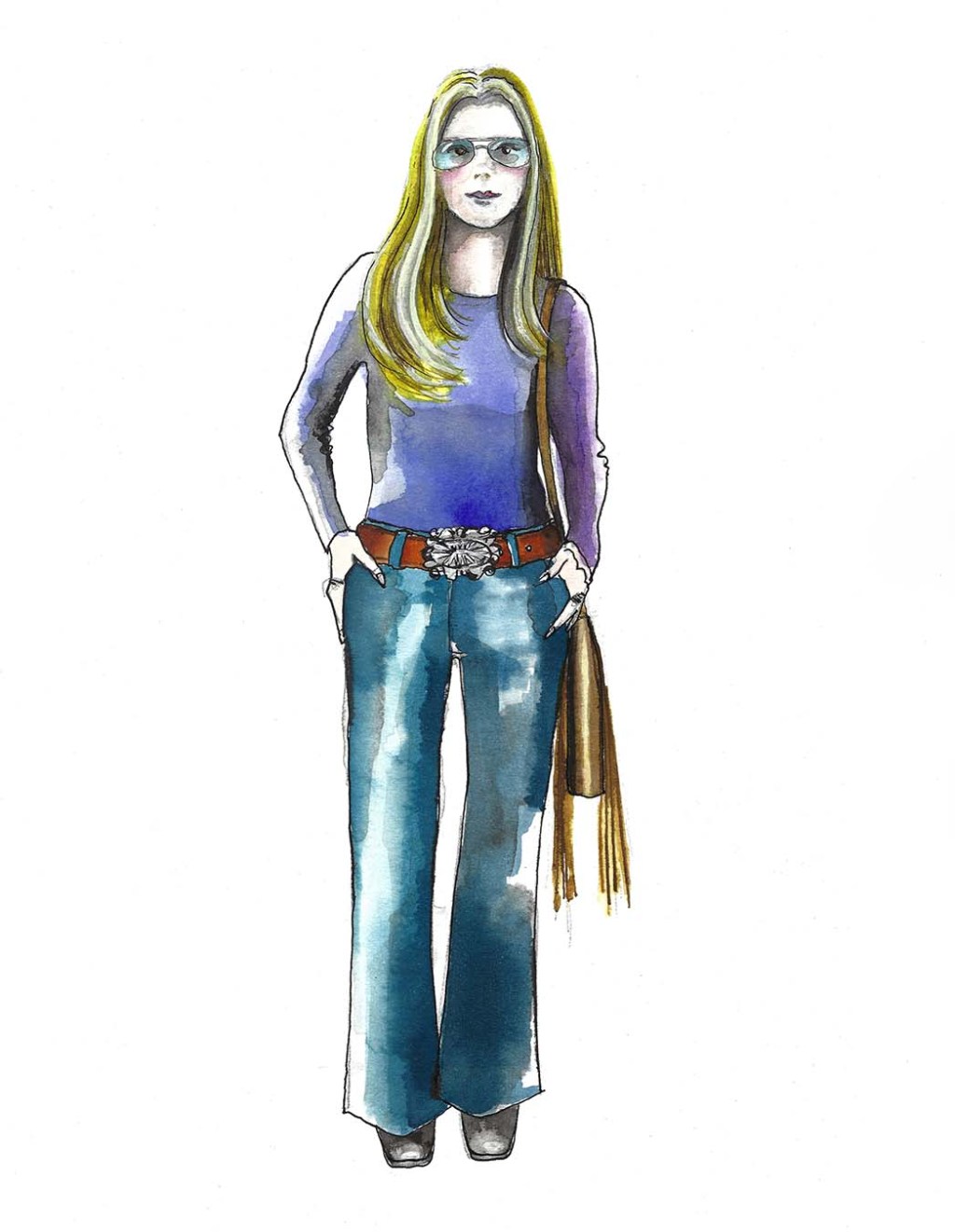 The time period of the film, beginning in the 1940s, covers the same period as The Irishman, Powell’s previous movie, for which she was nominated for an Academy Award for Best Costume Design. (She’s been nominated 15 times and won three times.) “It covered the same five decades, and I dressed mostly men. So it was quite refreshing to do The Glorias after that. They were polar opposites really,” says Powell, who underlines how much she enjoyed creating the wardrobes for other characters in the film such as Bella Abzug (played by Midler) — “famous for wearing many, many hats,” she says — and Florynce Kennedy (Toussaint). “They are fantastic larger-than-life characters,” she says, noting that the latter’s look included a “real Stetson-type hat, leather vests and huge earrings.”

Powell herself is known for her personal style, often seen wearing suits by labels including Aganovich, Thierry Mugler and Moschino. She was last seen on a major red carpet at the Oscars where she wore a cream-colored suit that had been signed by people in the film world, including Robert De Niro, Al Pacino, Scarlett Johansson, Brad Pitt, Bong Joon Ho, Leonardo DiCaprio, Laura Dern and Saoirse Ronan. It was later auctioned off, for 16,000 British pounds, to raise funds to preserve Prospect Cottage, the home of the late filmmaker Derek Jarman in Kent, England. “We ended up with 200 signatures, just before lockdown happened. [The cottage] is being turned into a museum and also residency for artists and the whole purpose of it was to protect his legacy.”

Currently, Powell is at work on a period drama called Mothering Sunday, starring Odessa Young, Josh O’Connor, Olivia Colman and Colin Firth. “It’s very English,” she says of the movie, which centers on the story of a young maid, played by Young. “It set in mostly 1924 and it also jumps to the late ’40s.”