Continue to The Hollywood Reporter SKIP AD
You will be redirected back to your article in seconds
Skip to main content
September 9, 2019 12:17pm

Michael Wilkinson is credited for triggering a wave of ’70s nostalgia on the 2015 fashion runways after his disco-inspired wardrobe for American Hustle struck a chord and landed him an 86th Academy Award nomination for best costume design. His most recent outing, Benedict Andrews’ Seberg  (which made its North American premiere at the Toronto International Film Festival on Sunday night), is a fairly modest project compared to his handiwork costuming Guy Ritchie’s blockbuster Aladdin. Nevertheless, the wardrobe that Wilkinson conceived for Kristen Stewart to portray the title character of this biopic is epic.

In her performance, which is cool and emotive by turns, Stewart uses the style savvy she has gleaned since landing her greatest offscreen role in 2013: brand ambassador for Chanel. Flaunting a striking coiffure that her hair designer, Sarah Stamp, describes as a “yellow blonde,” “choppy” interpretation of Jean Seberg’s iconic pixie, Stewart appears in a total of 28 costumes throughout the 96-minute film. That’s a new guise for her every scene. The film features rolling racks laden with opulent clothes, evoking the sophisticated Paris couture in which Jean Seberg dressed almost exclusively after hitting it big as the female lead in Jean-Luc Goddard’s 1960 New Wave classic Breathless.

One chrome rack stands on the set of a magazine photo shoot in which Stewart’s Seberg appears perfect before the camera. Another chrome rack hovering in the background of the swanky New York hotel suite in which Seberg had nervously prepared for the premiere of Paint Your Wagon ultimately entices a menacing FBI operative who stealthily infiltrates the room. After vicariously rummaging through Seberg’s red carpet finery, he sets to work on her yelping lap dog.

“The film is a tragedy, but it also pays tribute to Jean Seberg’s vitality,” explains Wilkinson. “It portrays three contrasting worlds: the glamorous premieres, the FBI’s world with its strict dress codes, and the counterculture movement of the Black Panthers.”

Seberg’s plot revolves around the covert surveillance and ruthless discreditation tactics that the FBI waged against the Iowa-born actress. As her “star began to fade” (circa 1968–71), she became an outspoken supporter of an array of civil rights organizations, including the Black Panther Party. Jack O’Connell and Vince Vaughan, who lead the FBI investigation, are, indeed, sharply suited by Wilkinson. Margaret Qualley and Zazie Beetz sparkle on screen as Linette (O’Connell’s wife) and Dorothy Jamal (the better half of a Black Power leader), but in terms of fashion, the film is a two-hander belonging to Stewart and Wilkinson.

Aside from the impressive number of costume changes, the variety of styles in which Stewart appears is exhilarative and runs the gamut from baby doll dresses to buttoned-up business attire, casual capris and hot pants, slinky lingerie and alluring evening gowns. Satin, chiffon, crêpe, patent leather — Stewart’s Seberg wears it all with great finesse and dazzles in an array of painterly colors — chartreuse, cherry red, lemon yellow, nude pink and what Wilkinson describes as a “Sixties” swimming pool blue.

If the fashion show unfolding onscreen lends pace to Andrews’ film, Wilkinson explains that the plethora of looks function to demonstrate the “full spectrum of Seberg’s style” and also help to evoke the “mounting sense” that Seberg was losing her identity due to the torment caused by the FBI’s perpetual surveillance of her. “From 1957 to 1965, Jean Seberg was an It Girl,” observes Wilkinson. “Our film was set as her star began to fade.”

The 12-year heyday to which Wilkinson refers began with the release of Saint Joan. Jean Seberg landed the lead in Warner Brothers’ big-budget Joan of Arc film after her high school drama coach submitted her name in the worldwide search that director Otto Preminger conducted to find his star. Trumping 18,000 applicants, Seberg was “catapulted to international stardom.”

Saint Joan flopped. But by the early ’60s, Preminger’s ingénue was a Paris-based New Wave star, the wife of Romain Gary (a distinguished author-aviator-diplomat), and the darling of the thriving couture scene. “I did exhaustive research about her clothes,” says Wilkinson. “She had a well-documented life, and the photographs were very inspiring. She wore all of the designers — Yves Saint Laurent, Chloé, Givenchy, the list goes on.” 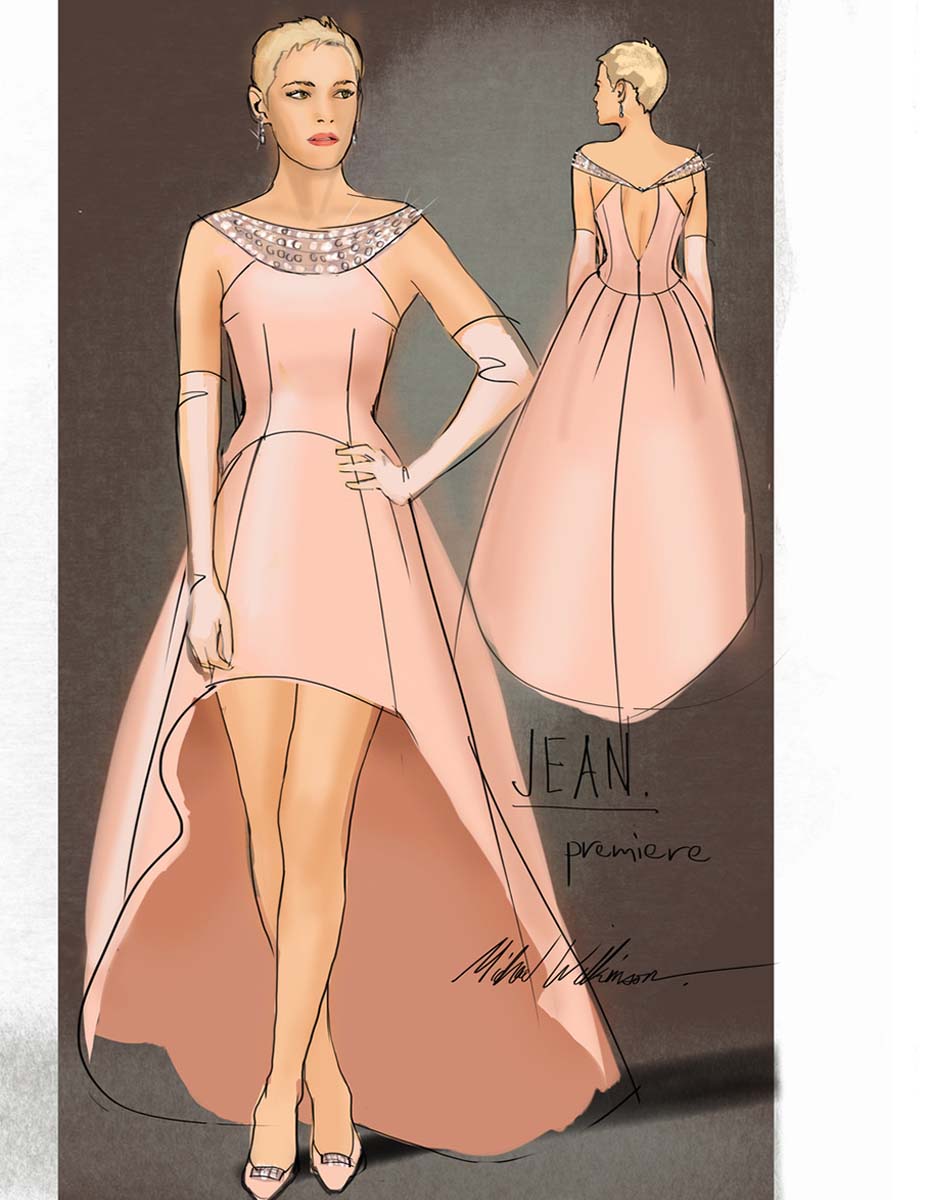 Both on and off screen, Seberg wore couture. And like her contemporary Jane Fonda — who in a Chanel gown and a mink wrap “stepped out of a long, long limousine” at the Academy Awards in 1970 and saluted the Panthers — Seberg did not allow her social conscience to cramp her style. While Hubert de Givenchy created Seberg’s wardrobe for 1958’s Bonjour Tristesse, his life partner Philippe Venet crafted some of her costumes for Lilith. Saint Laurent made her wardrobe for Mervyn LeRoy’s 1966 thriller Moment to Moment. Coco Chanel, Pierre Cardin, Louis Feraud, Guy Laroche, Sonia Rykiel and Emmanuel Ungaro were some of the other couturiers the actress favored.

Wilkinson has often collaborated with luxury brands on films, including Gucci for Batman v. Superman: Dawn of Justice and American Hustle. For Seberg, Roger Vivier gifted the production with three pairs of its block-heeled, buckle-embellished pumps, which the brand has recently reissued as “Belle Vivier” to commemorate the shoe, which Catherine Deneuve made famous by flaunting them in Louis Buñuel’s 1967 drama Belle du Jour. “Kristen wears three pairs of RVs in the film, in white leather, patent black, and pink satin dyed to match her [Paint Your Wagon premiere] gown, embellished with a diamanté buckle,” says Wilkinson.

There is no evidence to suggest that Seberg was a Vivier fan. But if, during preproduction, Andrews was “intrigued” by her insatiable fashion appetite, as filming got under way he seems to have been completely seduced. Of the Vivier shoes, Wilkinson confesses: “Benedict became obsessed with them and insisted upon close-ups.”