For Meghan Markle’s first appearance after her royal wedding, the Duchess of Sussex stepped out in a pointy Tamara Mellon Siren pump. “I remember the hysteria that it caused — we got something like 6 billion impressions,” recalls Mellon. “We sold out that day.” The British designer has been shoe-ing stars since 1996, when she co-founded Jimmy Choo with the East London cobbler, and understands how celebrity placement on the red carpet and beyond is Hollywood and fashion’s most influential platform. At the Emmys, Black-ish nominee Tracee Ellis Ross was shod in fuchsia satin platform shoes, dyed to match her showstopping Valentino Haute Couture gown; social media drove a 30 percent increase in web traffic. The brand’s Frontline, a strappy leather and PVC sandal, “has been worn over a hundred times” on the red carpet by stars like Beyonce, making it “our best seller,” notes Mellon.

Mellon, 51, left Choo in 2011, taking a reported $135 million payout not long after she found out that she was making less than some of the men working for her. In 2013, she launched her self-named, Los Angeles-based label, which filed for bankruptcy two years later. After a brief hiatus, Mellon — who sits on the Revlon board and the Chairman’s Council at the Met and was bestowed an OBE by Queen Elizabeth — relaunched her eponymous label in 2016 and announced in June a $24 million Series B financing, led by New Enterprise Associates and Quadrille Capital, with a total funding of $37 million. Says Tony Florence, general partner of NEA, which also invests in Goop and Moda Operandi: “Tamara is a proven entrepreneur innovating a global category that is a massive market, totally open to disruption using technology and a direct-to-consumer model. Tamara Mellon [brand] continues to exceed our plans. It’s scaling really well.”

What started as a digital, direct-to-consumer business (“We drop new shoes every month,” says Mellon) is expanding, with a new showroom in the Fairfax district “where stylists and actresses can pull for events” and the first bricks-and-mortar store at L.A.’s Palisades Village opening in November. The 400-square-foot space is being designed by Michael Maltzan, the architect behind her and fiance Michael Ovitz’s Malibu and Benedict Canyon homes (the latter is where they live with Mellon’s teenage daughter Minty, from her marriage to late banking heir Matthew Mellon). Shoes will be displayed installation-style as inspired by American artist Donald Judd. 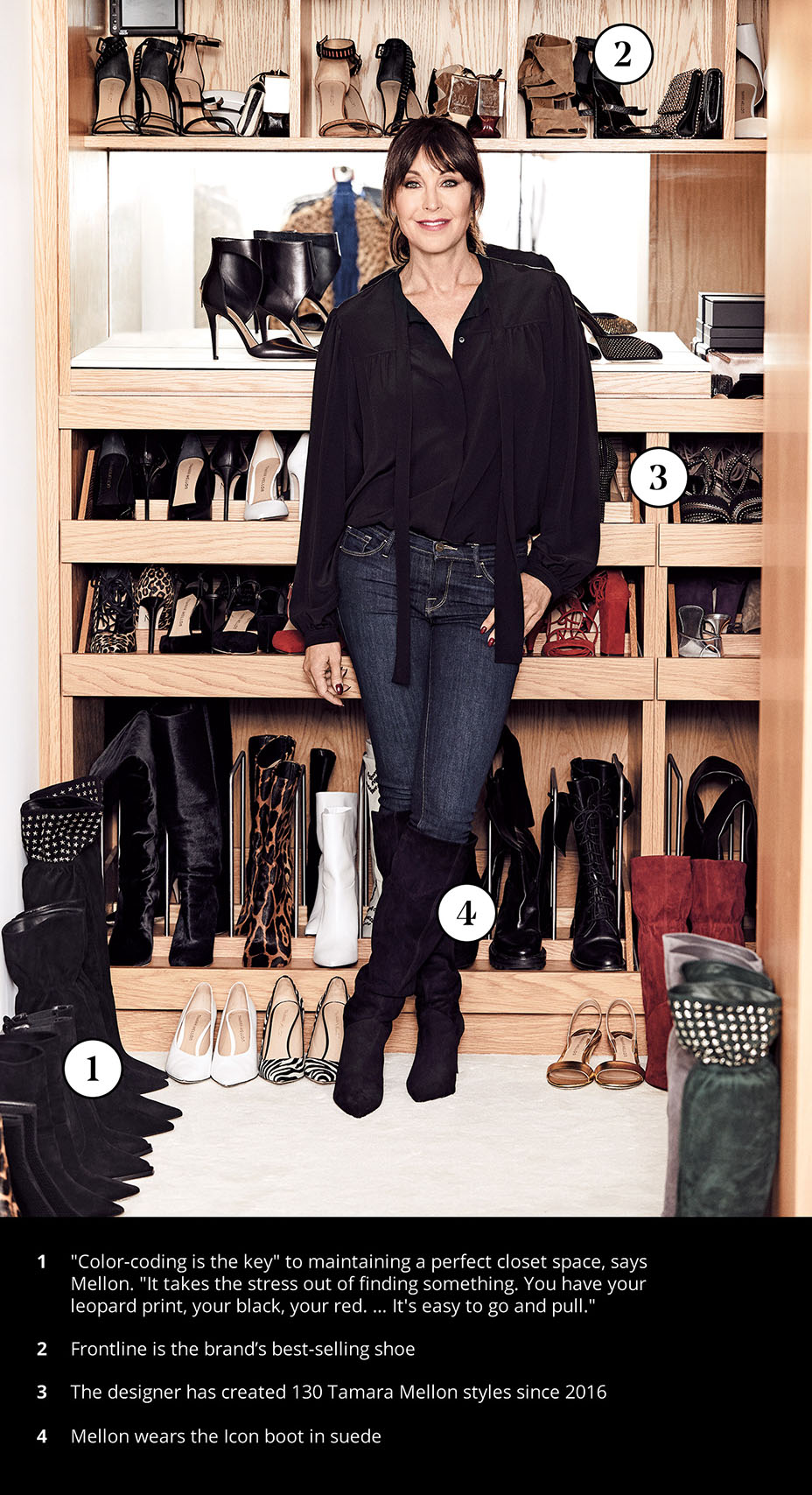 Mellon, who heads a 30-person team, says it’s no longer enough for brands to focus on glamour when woke stars and customers — hers are “working women in C-suites,” she says — “want to be socially active with their wallets. Traditional brands have always been silent on issues, but today customers want their brands to stand for something,” says Mellon, who partnered with Omaze on a campaign for Time’s Up (offering 12 pairs of shoes and lunch with herself and fellow activist Rashida Jones) and supported Dr. Christine Blasey Ford on social media after the Brett Kavanaugh testimonies. “Tamara has always been well ahead of the curve,” says designer Tory Burch. “That’s what makes her an excellent entrepreneur. Her knack for building and growing businesses is a testament to how forward-thinking she really is.”

Another hot topic for Mellon, unsurprisingly, is equal pay (“one of our main activations”); her staff is nearly entirely female. “We have two men ­­— they are great sports about it,” says Mellon with a laugh. Adds THR power stylist Elizabeth Saltzman: “The reason women love wearing Tamara Mellon is her voice encouraging women’s empowerment — and a monthly drop so there is always something fresh!”

Sitting on the Tamara Mellon board and offering “a continuous stream” of advice is her fiance, CAA co-founder Ovitz. “We met at the Forstmann Little conference in Aspen, hosted by our mutual friend Teddy [Forstmann],” says Mellon of the late private-equity billionaire; Ovitz asked her to have a drink with him. “I knew who he was and thought, ‘I’m looking at this sea of middle-aged men with potbellies and bad chinos — he has cool jeans and nice shoes.’ So I went for the drink.” That was in 2011. Today Mellon says she feels “very fortunate to have his involvement. A lot of people ask Michael to join their boards. He’s hard to get, so I had to leverage my relationship. At the same time, he says that he loves having someone at home he can bounce the ball off of. He trusts my opinion on his investments and art purchases.”

The Michael Ovitz Interview: At Home With the Former (and Still Fierce) King of Hollywood