On July 11, the day Walt Disney World in Florida partially reopened for the first time since shuttering in mid-March amid the coronavirus pandemic, Disney posted a “Welcome Home” video to social media. The clip, featuring the sights of the park and staff with masks, was immediately criticized and, in some remixed versions, altered to look like a horror film, including one featuring the theme from The Shining.

But guests did return. Even with resort capacity significantly capped for social distancing, nearly all rides had double-digit wait times within the first seven days of opening, according to Disney’s park app.

Despite criticism for reopening too soon — on July 26, Florida recorded more total confirmed COVID-19 cases than New York, the country’s first epicenter — industry observers view the park as a harbinger for evaluating protocols on returning to work safely.

“Universal Orlando reopened a month before Disney World, and it received nothing like the public focus Disney did,” says J.D. Connor, a USC School of Cinematic Arts associate professor and Disney expert. “The other parks make mere business decisions; Disney makes cultural decisions.”

There are risks to this approach. Disney World is adjusting safety measures, including updating its face mask guidelines to ban certain bandanas and other less protective coverings. And Actors’ Equity, which reps some performers at Disney World, filed a grievance July 9 over the lack of regular testing for castmembers at the park. (Disney did not recall these Equity performers from furlough amid the dispute.)

Generally, Americans appear cautious about returning to theme parks, a new nationally representative THR/Morning Consult poll finds. About 21 percent of U.S. adults say they’re “very” or “somewhat” interested in returning to a park this summer or fall, and that number only increases to 23 percent when asked about visiting a park this winter or early in 2021. 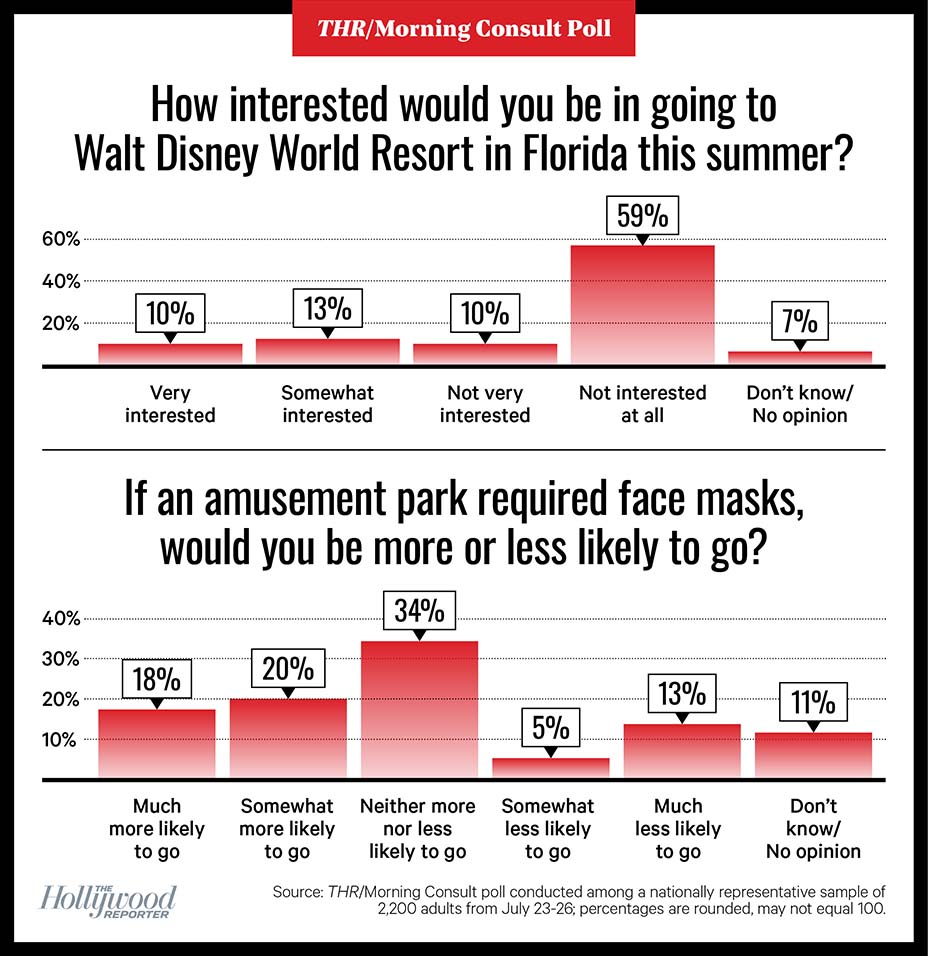 Attorney Anthony Russo, who has litigated against Disney on injury cases at park properties, calls the move to reopen in Orlando “arrogance,” even with Disney’s stark warning that guests assume all risk by visiting. “I would caution strongly against putting a company — especially with a name like Disney — in a position where they can end up creating a legacy of putting profit over people,” adds the Florida-based Russo.

As one Disney park was reopening, another one was closing again. Hong Kong Disneyland shut indefinitely July 15 because of an uptick in virus cases in the host city, and neither Disney nor Hong Kong health officials have offered recent guidance on when it will welcome guests again. Since the park closed its doors for a second time, the city’s third wave of COVID-19 has only worsened as the total number of infections rose by another 145 cases to 2,778 on July 27.

Some Wall Street observers are cautiously optimistic about the conglomerate. While Disney shares dipped below $100 amid the initial U.S. outbreak, as of July 28 it was trading at more than $116 a share. “I have been in regular contact with the company, and I do not believe its reputation and image will be tarnished by potential reclosings,” says Moody’s senior vp Neil Begley. “The profound steps and initiatives are consistent with the squeaky-clean company image, and there is no other material alternative competitor that could pick up business lost from any falter.”

Disney’s parks division, led by chairman Josh D’Amaro, has yet to provide an update on when it will reopen Disneyland in Anaheim, closed since mid-March and awaiting statewide guidance. Austin Lynch, union director in Orange County for Unite Here Local 11, which reps nearly 3,000 castmembers at three Disneyland hotels and restaurants, has been in talks with Disney over a request to regularly test park employees. “No one blames Disney for the pandemic, and they’re not the only ones grappling with how and when to reopen,” Lynch notes. Despite the push-and-pull nature of his union’s talks, “I still perceive Disney as a company that wants to do things safely,” he says, “even though we sometimes have to battle with them because we see things differently.”

Lynch notes that Disney can hurt its own brand, specifically with the way it treats employees. “In 2018, our union coalition commissioned a study that showed that approximately 11 percent of Disney service workers had been homeless at some time in the previous two years,” he says. “Many of those workers found the courage to go public and even invite reporters to shadow them as they lived in their cars, friends’ sofas, etc. That exposed a true disconnect between the values that Disney preached versus the reality of their actions, and it led to the company agreeing to new union contracts with huge wage increases.”

To date, Connor says, one of Disney’s biggest self-inflicted wounds was Disney’s America, the aborted theme park project planned for Northern Virginia in the 1990s. “They managed to offend wealthy locals, historians, Ken Burns, and civil war buffs — an important potential group of attendees — and to get into a messy political fight that got a lot of attention in D.C., where the company had other crucial corporate interests (foreign trade, broadcast deregulation, etc.),” he says. More recently, the company announced it would rebrand Splash Mountain amid renewed outcry over the classic ride featuring characters from Song of the South, the racist 1946 film Disney has since disavowed.

One of the loudest, most prominent critics of Disney and the massive pay disparity between corporate and park employees has been heiress Abigail Disney, whose grandfather, Roy O., co-founded the studio with his brother, Walt. Although she has no role in the company, Disney has made it among her callings to hold it accountable and has joined the chorus criticizing the Disney World reopening.

Walt Disney died in 1966, and Roy O. five years later. While neither faced a situation like the novel coronavirus pandemic impacting their company, some have speculated how they might have handled the current situation.

“I don’t want to speak for Roy O. Disney against his granddaughter, of course, but he was an exceptionally sharp financial manager,” Connor says. “Similarly, her father, Roy E. Disney, enjoyed tremendous success working with Stanley Gold. I don’t think either of them would be opposed to opening the parks if they had confidence in the safety protocols that had been put in place. Walt is a slightly different case. He and his brother often played good cop, bad cop on such difficult decisions, and I can imagine Walt leaning against reopening but then saying that Roy [O.] had assured him things were safe and that the company had to get back to business. ‘If it were up to me,’ he would shrug.”

Hollywood's Reopening Dilemma: "We Can't Afford to Get This Wrong"