Continue to The Hollywood Reporter SKIP AD
You will be redirected back to your article in seconds
Skip to main content
July 25, 2019 8:52am

Quentin Tarantino’s plans to make a movie about Charles Manson and his “family” have been public since at least mid-2017. Because of the director’s penchant for secrecy around his films, it’s been described early on as “an ensemble movie about Manson and his followers.”

That description is different from what has been presented in the marketing campaign for Once Upon A Time … In Hollywood. Instead what the audience has been sold is a story set at the end of a cinematic era where movie stars reigned, just before auteur filmmakers and sci-fi spectacle became the main attractions.

Leonardo DiCaprio stars as Rick Dalton, a big-time star who’s flourished in the studio system but now worries his career is fading. Known for Westerns and other action films, Rick is accompanied on every set by his longtime stunt double Cliff Booth (Brad Pitt). Elsewhere in Los Angeles, aspiring actress Sharon Tate (Margot Robbie) is trying to get into the movie business while also becoming involved in other things that will result in murder.

This mix of fiction and non-fiction is tracking for an estimated $30 million-plus opening weekend. Not being part of a franchise or connected cinematic universe, the campaign has used Tarantino’s name recognition and the fact his movies are celebrated as cultural milestones among cinephiles as a brand hook on which the marketing is hung.

Pitt and DiCaprio are featured on the first poster released in March (from marketing agency Works Advertising), the two leaning casually against opposite walls while wearing period styles that honestly wouldn’t seem out of place today. Robbie stands across the street from a movie theater on the second poster, looking slightly naive and wistful in her short skirt and high boots.

Beginning in mid-May a series of posters (from agency BLT Communications) were released for the films of Rick Dalton, DiCaprio’s character in the movie. At least a couple of those are for the Italian releases of those faux films, a nod to Tarantino’s love of the Spaghetti Westerns directed by Sergio Leone and others as well as to how the story involves Dalton going to Italy to shoot movies like this.

The theatrical poster, released in early June, features a very Struzan-like art style as it shows all the main characters at the top and other supporting characters elsewhere along with elements like classic cars, theater marquees and more that help establish the setting of the story while also hinting at the story itself.

Just a week prior to release, another batch of new artwork came out that bounced back and forth between selling the actual movie and playing up the fact so many major stars are in a movie where they play actors. Posters and billboard art for DiCaprio, Robbie and Pitt all appeared to be traditional key art for the movie, putting the three in unique settings that all speak to the L.A. setting of the story.

The first teaser (18.7 million views on YouTube), released in mid-March, sets the 1960s tone immediately. We meet Rick and his stunt double Cliff and are introduced to the world of Hollywood in the age of go-go dancers, charming TV hosts, neon advertisements and Bruce Lee, all presented with Tarantino’s trademark flare. There’s little about the story presented here as it’s just meant to give a taste of what to expect.

In the next trailer (14.5 million views on YouTube) we get more of an immediate sense of the dynamic between Rick and Cliff before pulling back to show the late-60s Hollywood setting of the story. Rick is having career issues, many of his own making, with Cliff trying to help him out of the rut he’s in. There’s more here about how Cliff winds up getting mixed up with Manson and his captives, but that’s not explored too deeply before it gets back to selling the movie simply as a swinging story filled with cocky men and hip music. 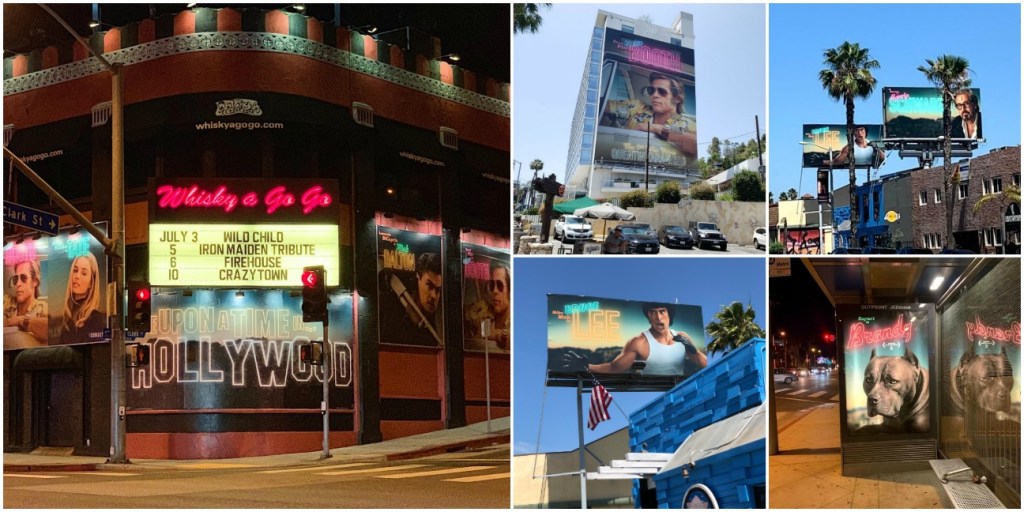 As mentioned earlier, the movie has been discussed by Tarantino for about two years now, when he first started publicly speculating on the project and what it might entail. In November of 2017 it became official when Sony won what The Hollywood Reporter reported to be an intense bidding war among studios eager to work with the director in the wake of his longtime patron Harvey Weinstein being ousted from power.

The initial release date was set for early August to coincide with the 50th anniversary of the murders committed by Tate under Manson’s influence, but concerns over how that looked lead to it moving up a few weeks. DiCaprio and Tarantino appeared onstage during Sony’s presentation at CinemaCon 2018.

Casting news filled in much of the time between that and the launch of the official campaign earlier this year, including Bruce Dern being brought in for a role originally intended for Burt Reynolds before he passed away last year.

In mid-March it was announced the movie’s premiere would take place at Cannes, notable since this year marked the 25th anniversary of Pulp Fiction debuting there and launching Tarantino into the stratosphere. That premiere eventually happened, but not before speculation the director wouldn’t be done editing the film to his liking in time.

Prior to the premiere at Cannes, Tarantino penned an open letter to critics and journalists asking them to please not reveal any spoilers, arguing that doing so would prevent future audiences from enjoying the film on the same level. What exactly constitutes a spoiler and what is simply a plot point or character trait was left undefined, with the letter marking another moment where filmmakers and studios seem to feel any discussion of a film impedes their ability to market that film effectively.

In the wake of what was reported to be a seven-minute standing ovation at Cannes, Sony summarized all the promotional events there in a sizzle reel video released a short while later. Following all the concerns Tarantino wouldn’t finish the movie in time for Cannes, reports quickly came out that he was planning to make changes before theatrical release.

Starting in late June a handful of longform spots — it’s unclear if these were meant for TV or elsewhere but play like commercials, or at least shorter trailers — were released. “This Town” certainly comes off like an edited version of the trailer while “Picture” appears more like a traditional, if extended, TV commercial. The latter is also notable for being the first bit of marketing for the film to devote any substantial length of time to Manson and how he and his “family” connect with the lives of Rick and Cliff.

Sony released a Q&A video with Tarantino and the cast in early July where they talked about filming the movie, the story and more.

Around that same time, news came that a film series “inspired by” the movie was being curated by Tarantino airing on the Sony Movie Channel this week. The “Swinging Sixties, a Movie Marathon” series featured films — all from the Columbia Pictures catalog — from the time period depicted in this movie and represent the changes Hollywood was undergoing.

The first clip, released last week, had Randy — played by Kurt Russell — confronting Rick about the cost of the actor bringing Cliff along to the production of the film they’re shooting.

Sony used a series of unique artwork in outdoor ads placed along Sunset Blvd. in Los Angeles near hotspots like the Whiskey A-Go-Go, The Aquarius Theater and The Andaz Hotel, all of which are locations shown in the movie and are deeply connected to Hollywood’s music and entertainment history. That artwork was presented either on its own or as an instillation of panels and began running July 1 through the end of the month. In addition to Pitt, DiCaprio and Robbie, the series of billboards shows much of the supporting cast, including Al Pacino, Margaret Qualley and others.

If you visit the movie’s official website, you’ll notice among the marketing materials there a section called “Meet Rick Dalton.” That page has the faux film posters mentioned above as well as a link to Dalton’s IMDb page, which redirects from DiCaprio’s to show the fictional actor’s biography and filmography.

The movie’s premiere put a cap on how the campaign has focused on the entertainment industry itself. A Hollywood soundstage and VIP lounge were recreated at the TLC Chinese Theater hosted A-list celebrities who came to see the latest from the director.

In a partnership that makes a lot of sense given how important music has always been to Tarantino’s films, Sony partnered with Spotify to create two exclusive playlists. One was a collection of songs from the movie’s official soundtrack, the other a curated list of Tarantino’s favorite music from his previous films. 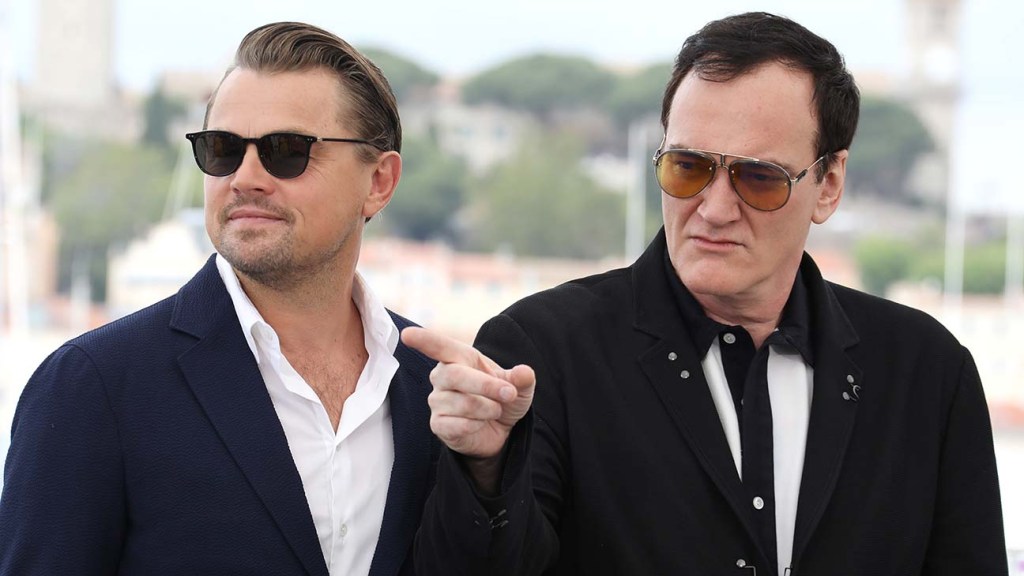 Tarantino has long been known as a writer/director obsessed with pop culture, funneling that obsession into his own films. The campaign Sony has created plays like an object lesson in that obsession, showing how he has recreated an era of Hollywood where foundational shifts were underway at the same time major events like the Manson Family murders were leading to a loss of innocence for America.

What’s surprising about the campaign is that for as much as the movie has been framed in the press for the last two years as one about Manson and his cult, that real-life figure is absent from 90 percent of the trailers and other marketing materials. Instead the focus has been on Rick and how he’s fighting to keep his career above water while his loyal stunt double Cliff leans back and enjoys the ride, as confident and relaxed as Rick is unsure and fidgety.

Other than that the campaign seems intent on reaching an audience wooed by the promise of seeing “the ninth film from Quentin Tarantino.” That message will resonate with those who have carefully followed his career over the last 25-plus years and who believe Tarantino when he claims he will retire after his 10th film. That message — pervasive throughout all elements of the campaign — acts either as a mile marker showing progress or a countdown toward an inevitable conclusion.