When Cher talks about Stephanie J. Block, she uses the first person. Block wowed critics playing “Star” in The Cher Show on Broadway, and is one of three actresses who portrays the pop icon onstage, alongside Teal Wicks as “Lady” and Micaela Diamond as “Babe.”

“She kept referring to my character as herself,” Block tells The Hollywood Reporter. “So she would say, ‘The young one and Lady and then I step onstage.’ And when she would say ‘I’ she meant my part as Star. That really got me very emotional. Because I thought, ‘OK, she sees herself in what we’re portraying onstage.'”

While Block skirts deferentially around the word “friendship,” she has formed a real relationship with Cher through the process of working on the show, from an initial five-week workshop to an out-of-town production in Chicago to Broadway. What began as some casual suggestions in rehearsal has evolved into extended conversations about life and late-night email exchanges.

“I could reach out to her and say, ‘Hey girl, it’s me,’ and I think she would know who I am, which is such a strange thing,” says Block, a two-time Tony nominee whose performance in the show was described by THR‘s chief theater critic David Rooney in his review as “a delectable star turn.”

“Her take on Cher goes beyond impersonation into loving, entirely respectful homage, and while the vocal likeness is uncanny, it’s also sufficiently distinctive to prevent the characterization and song interpretations from seeming second-hand,” Rooney writes. “She’s a stunner, right at home in the spotlight.”

THR went Off Script with Block to talk about becoming Cher, singing with the diva incarnate on opening night and channeling her energy to perform — and shut down those phone cameras. 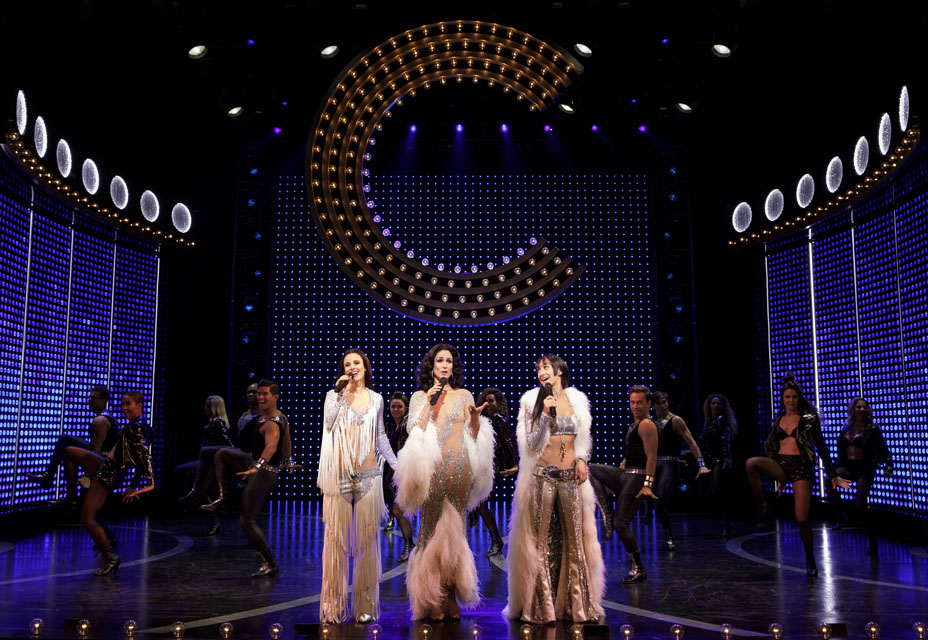 Were you a Cher fan before you started working on this show, and what was your reaction when you were asked to play her?

I was a fan of Cher, not obsessed — not yet anyway. I’ll be honest, I said no to the offer a couple of times. My Broadway debut was playing Liza Minnelli in The Boy From Oz opposite Hugh Jackman, and so I knew what the scope of playing a living icon was and what it took and the challenges of it all. There was a little bit of post-traumatic stress disorder that I thought, “Oh man, do I really want to approach this again?”

What made you say yes?

I had an incredible dinner with the director, Jason Moore, and he presented his concept of what he saw for the show. There was something spiritual and sort of meta about it — the three of us being together, speaking to our younger selves, lifting each other up. There was something really woman empowerment about it. As a 46-year-old woman and as a mom and a best friend and a sister, I was like, I kind of love that, so let’s go.

What was it like meeting her for the first time and performing as her while she was watching?

Performing for her the first time was petrifying. The producers said she’s going to come a half hour before we present it [in a workshop], and she would like to meet you all. In order for me to feel like I could do my job in the proper way, I went upstairs and I hid in a corner, and I was like, “I’ll meet her after.” And the producer came up to me and said, “Uh uh, Cher’s going to meet you right now.” So I was brought to the principal’s office to meet Cher, and she was lovely. She was gracious. She knows what it takes and the vulnerability you need to be out there exposed, especially when she is going to be watching her own life. And she was honest, too. She was like, “You gotta know, this is pretty damn scary for me, too. So let’s just do it together.”

How did the two of you work together on the role?

She was with us for three consecutive days and performances in Chicago. And then she got really busy, so when we started to rehearse for Broadway the only contact we had with her were emails and notes. When we got to the theater, she started to show up during previews. She was very emotional, but she really started to sit down with us. You know, 45-minute sessions of stories and her allowing me to share my life and my experience and what brought me to this particular place. Her sharing her views and what she felt at certain points of her life. Little things like the nail polish or perfume she wears. She invited her own personal makeup artist to do my makeup. She invited her own wig and hair lady to come and take care of me and reshape some of my look. She really started to care about and for me, and it was really very special.

The two of you performed together during the opening night curtain call. Did you know that was going to happen?

Yes and no. The beauty of Cher is you never quite know what it’s going to be. The producers said, “Would you feel comfortable presenting a thank you in a final curtain call speech and inviting Cher onstage?” I was like, “Total honor.” And then they said, “We’ll see, maybe you guys might sing together.” And I was like, “We’ll see, what does that even mean? I can’t invite Cher onstage and then just not quite know what’s going to happen next.” And they said, “Well, we will play ‘Turn Back Time’ underneath, but she may stop the band and address the audience. She may say no and just give you a hug and take a bow. Or she may sing. Let’s just see what happens.” It really was that.

I had no idea what was going to be on the other end of that hug. She heard it and instinctively, something jumped out of her. So when that happened everything sort of released in me, and I was like, “Oh, here we go.” It was joyful and then at a certain point I couldn’t believe it was happening and then at another point my inner dialogue was like, “You better embrace this girl because this may never happen again.”

I love when you’re like, “You go ahead” as the two of you start singing at the same time.

[Laughs.] I know, who the hell do I think I am? You go ahead Cher. You sing your own hit song. There you go girl. 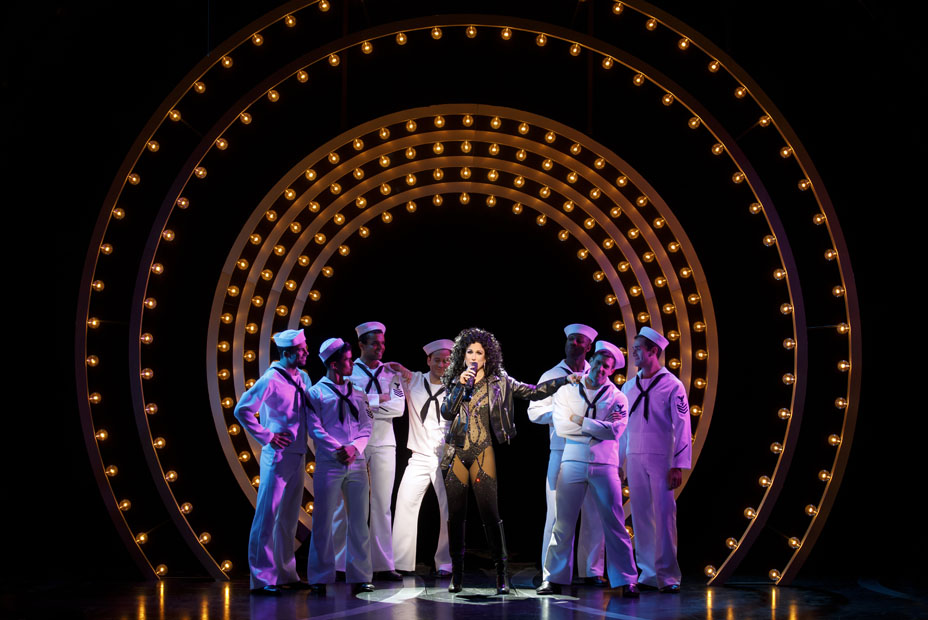 You mentioned working with Cher’s makeup and hair people, but you also worked with Bob Mackie on the costumes. How was that experience?

He’s a master. He’s an artist. I really was scared shitless at first just because of what was going to be exposed onstage. I had never experienced that as a musical-theater or straight play actor. You don’t hear, “We don’t wear bras in this show.” I mean, that literally was a sentence that was said. I’m sorry, I’ve breastfed a child. I need a brassiere. I started to feel much more safe, much more sexy in my own skin, and empowered in my own skin, and that was a big gift that both Cher and Bob gave me.

At my age to walk onstage in my own body, not pretending to be someone else — yes, I have to be Cher — but I also know my measurements and they don’t match Cher’s. Her body is like another creature from another world. I’m so grateful, that’s the first time in my life I can honestly say that no matter what I’m wearing in this show, I’m trying to walk with great strength and great love for my own physical person, and I’ve never been able to say that before.

At the performance I attended, you stopped an audience member from filming you in the final concert sequence, and you did it so quickly. Do you have to do that a lot?

I think because we start the show in a sort of concert manner people forget we’re still in a Broadway theater and all filming and recording is prohibited. There are those that are sneaky and try to hide it, but then there are those that are just blatant. The phones go right up and the light’s filming you, and it’s completely distracting. Yeah, at a certain point, I do tell people, “You gotta stop. You’re killing me.” If I can fit it into the dialogue as Cher, I will, but if I can say it off mic and catch them and school them and be like, “That can’t happen,” I’m all about it. It’s the freedom of being Cher. That is something Cher would do. It’s completely on point to call somebody out or say, “Stop that shit.”

This show is really vocally and physically demanding. How do you take care of yourself?

I have the most extraordinary husband, who lets me do hours of self-care. We’ve got a toddler who likes to wake up at 6 a.m. so he takes the morning shift. Then I’ll pick her up from school. I haven’t found the rhythm yet. I don’t know quite what maintenance is going to be because we’re just now out of daytime rehearsals. But it is going to be a lot of acupuncture, a lot of voice lessons, a lot of physical therapy. Her headpieces and wigs and shoes and costume changes alone, my body’s starting to feel the effects. Family time really feeds me. I’m not quite sure yet what it’s going to take to make it work eight shows a week for the next year, but I’ll figure it out. It’s what I do.