When Nicole Kidman opened the Cannes Film Festival in 2014 with Grace of Monaco, even the most discriminating fashion snobs were wowed by what she wore: a strapless, heavily (and intricately) embellished Armani Prive creation paired with Harry Winston jewelry. Though the Oscar winner had been to Cannes a handful of times, dating back 25 years, that rise up the Palais steps marked a first — her very first collaboration with stylist Julia von Boehm.

They’re back this year as Kidman has four selections in the lineup — The Killing of a Sacred Deer, The Beguiled, How to Talk to Girls at Parties and Top of the Lake — making her the unofficial (though really official) queen of Cannes. Don’t look for von Boehm skipping down the Croisette on a giddy victory lap, though. She’s not there.

The German-born fashion insider, who counts Kidman as her one and only celebrity client, tells Pret-a-Reporter that she and Kidman have perfected their relationship during the past few years since that very first Cannes together: Kidman hits the carpet while von Boehm stays home (usually in New York).

“I never go,” says von Boehm with a laugh, knowing the admission comes off as a bit of a surprise. “It’s crazy, right? The way I work with Nicole is that I get her red-carpet ready in advance, always. I love it that way and so does she.”

It probably wouldn’t work with just any actress, but Kidman isn’t typical in any category. She takes just as many chances on the red-carpet as she does onscreen with an inherent ability to pick winners. “She knows clothes so well. She loves fashion and understands it,” says von Boehm, who built a relationship with Kidman working on editorial shoots and campaigns for Jimmy Choo. (von Boehm started her career as an assistant to Carine Roitfeld, then editor of Vogue Paris, before seguing to magazine work for Harper’s Bazaar and Vogue Germany.) “With her body she can wear anything. She can wear any silhouette. She has extreme elegance and she’s chic. At the same time, it never gets boring.”

Compliments are easy to get from von Boehm, but hints as to what Kidman will wear in Cannes are not. In addition to the four film premieres and accompanying photo calls, Kidman also is one of the chairs of the always glam amfAR gala, so that translates to about a dozen or so looks in total. “I won’t be able to say that yet, unfortunately,” she teases, when queried about what designers one can see Kidman wearing. “What I can say is that we will try to surprise every day.”

There’s a certain crush and potentially dizzying sprint toward Cannes, especially with a demanding run like Kidman has this year, but von Boehm is unfazed by the schedule even if the lineup was just announced one month ago. “I have lead time because I reserve stuff off the runway, even when I look at couture shows. I request particular dresses even though we don’t know yet what for,” says the stylist, who adds that avant-garde and more European-style looks work best in Cannes. “She fits runway, so I don’t need that much lead time.” 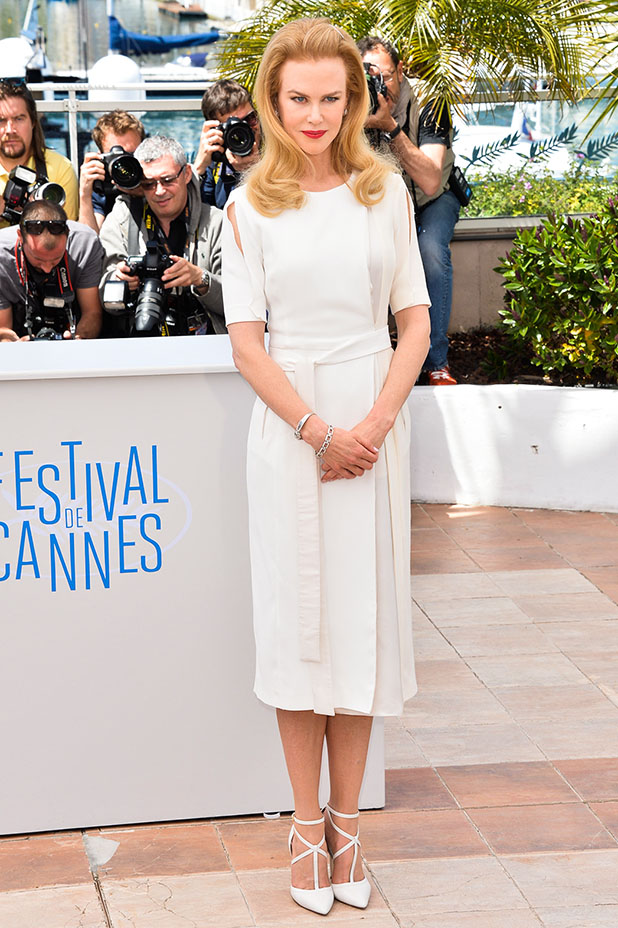 She also doesn’t need to offer any tips on how to wear the gowns: “Her posture is so incredible and it’s natural. She knows how to move. You have to know how to keep those parrots up there, and she always does.” The bird reference is a nod to Kidman’s dazzling Gucci gown that she wore to the SAG Awards, one of a series of standout style moments Kidman had with von Boehm this awards season. Included among those is the metallic, sequin encrusted Alexander McQueen dress with statement sleeves that she picked for the Golden Globes.

“Nicole Kidman is one of the modern day fashion icons, along with Cate Blanchett and … I can’t think of anyone else,” muses stylist and fashion expert George Kotsiopoulos. “She is very tall and very thin and she can wear anything that she wants and look fabulous. That’s really female empowerment — wearing whatever the f— you want. Who cares what anyone says?”

It’s that brazen personal style that has inspired peers and fashion fans. Influencer Chiara Ferragni told Pret-a-Reporter that she won a competition when she was 13 years old by channeling Kidman from Moulin Rouge, a film that premiered in Cannes in 2001. “I dressed up as her — it was amazing,” laughed Ferragni. “She’s a big idol of mine. I love her style.”

Speaking of playing dress up, von Boehm says that it’s not part of their strategy to overwhelm with jewelry. “I like to give it some believable feeling, instead of looking like someone put it on and will rip it off when the carpet is over,” she explains. “We have an idea of what works for which dress and some allow for a jewelry or surprising moment. It will be very classic.”

Those moments, for von Boehm, will have to be experienced from afar since she’s not making the trip to Cannes. But, like their collaborations, she’s got a system for that as well. “Sometimes when I get really excited, I ask if she can please snap a picture before, but I don’t want to bother or be a pain. I know how busy it can be,” she says. “Instead, I keep hitting refresh at home.”