Thursday night. November 2017. I was tucked away in a rented house secretly writing a TV pilot based on Octavia Butler’s novel Dawn. Patty Jenkins had called that morning to ask if I’d like to direct two episodes of her and Sam Sheridan’s series One Day She’ll Darken after a fierce competition for the job. Between these two adventures, I genuinely didn’t want for anything. I was creatively filled to the brim.

Then an email comes from a director I deeply respect, asking if we can chat. Around 8 a.m. the following morning, the phone rings. No assistant. No conduits. No fanfare. Just J.J. Abrams. Straightforward.

At most, I predicted that he needed someone to shoot footage of a local high school play. My brain never once, not even for a nanosecond, went to the four-decade-strong beloved franchise.

Seventy-two hours later, we’re seated in his office for three hours. We talk about film, art, family, work, childhood and life. We dive headlong into the impact of Star Wars on us as kids. I tell him that I’d ached for years to be Han Solo. I longed to fly in and out of death-defying circumstances wearing that vest, a bundle of charm and endless wit. I would lay outside in my backyard at night with my backpack and my imagination — waiting, waiting, waiting for the Millennium Falcon to come get me. At 12, I had far more in common with any given character in Mos Eisley than I did with kids at my school.

Five months later, J.J. is leading us, his key crew, through soundstages at Pinewood in London. My entire being is knocked back by the magnitude, labor and precision of a ship being erected from scratch. My jaw hits the floor, and I hear myself say, “Holy shit!” I start telling myself, “Pull it together. Don’t be an amateur. Keep your geekdom close to the chest. Hide your awe, Mahoney.” But then I see J.J. in my periphery, smiling as big and full as me. I’m delighted — and relieved not to have to hide that I’ve been dreaming of this moment and the higher stakes of day-to-day directing on a massive franchise. 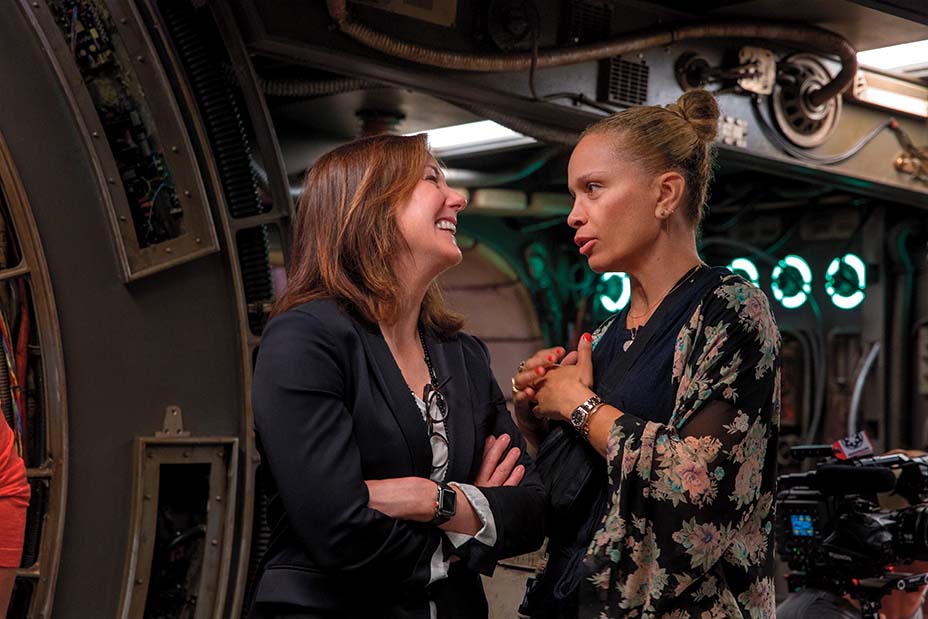 It’s no secret to my peer group I’d been trying to break into the studio-franchise realm for 10 years. Begging to simply get a meeting. Nada. Zilch. Nunca. As for J.J., after numerous, widely circulated, almost identical lists of directors had landed on his desk, he decided to do outreach calls of his own. When he phoned Ava DuVernay for her list, she said, “I happen to have a great list, J.J., but I’m not giving it to you. I’m giving you one name and one name only: Victoria Mahoney.”

In Hollywood’s four decades of making top-tier franchise films, no one other than J.J. has stepped out of traditional hiring practices to take a risk on an outlier like me to helm their second unit. Mind-blowing, right? Not one other filmmaker, producer or studio before him. Equally disturbing: No one else in that position of power has since.

On a recent panel, Lucasfilm president Kathleen Kennedy spoke of her reaction to my first day of filming, saying that within an hour, she and development exec Michelle Rejwan were excitedly smiling at each other, witnessing that I was a solid choice.

Obviously, I had to learn whatever there was to learn for any first-time director on a massive franchise: the pace required for the rules of that story; the unspoken behavioral language of that set; preferred lenses suited to an extremely specific aesthetic; the rhyme and rhythm of a crew that was brand new to me; and the hidden parameters of each and every location.

But with regards to protecting story, hunting for truth in performances, optimizing gear, wisely utilizing hours in a day, galvanizing a crew or making certain to never personalize notes from the bosses — all of this had long been a part of my learned experience and inherent skill set. There’s a lot to be said for the countless amount of billable set hours I’ve worked since 1991.

Overnight, young filmmakers — who recognized me from a photo Ava took of J.J. and me the day the news broke about my hiring — began stopping me at airports, coffee shops and restaurants. All of them were eager to share their affinity for sci-fi and how teachers have tried to talk them out of the genre because studio hiring practices still remain traditional for big-budget franchises — suggesting that they might never be employed. But having chanced upon the photo of me and J.J., they think, “He hired her. She exists in that realm. So can I.”

Audiences can argue for centuries about what lives at the core of Star Wars. For me, Star Wars has and always will inspire hope.

Nearly a year after our initial meeting, J.J. and I were filming an intricate shot that goes from a high/extreme wide to a ground level/medium close. We had to fluidly hit each story point within a restricted time frame. It was an insanely fun shot that fused location, performance, water, flames and more than 100 background players — all the stuff I live for.

Recalling the story about sleeping in my backyard and waiting for a certain starship to come get me, J.J. leaned in and said, “We came for you, Vic.” I’m eternally grateful they did. Not just for what the job has given me but more for the miles upon miles of hope this job offers countless others.