It’s a big year for the Clown Prince of Crime, with 2020 marking the 80th anniversary of his first appearance in Batman No. 1. DC is marking the occasion by giving the villain his own special issue, released this week, featuring contributions from creators with longstanding associations with the character, including Brian Azzarello, Paul Dini, Scott Snyder and Jock. The one-off special issue also includes a gift to the Joker: the death of Batman.

The Dark Knight’s demise comes in “Kill the Batman,” one of the stories in the oversized issue, by Rogue One writer Gary Whitta, writer and podcaster Greg Miller, and artist Dan Mora (Once and Future, Klaus). It’s a glimpse into an alternate future where Bruce Wayne’s alter-ego has been defeated, and the Joker finds the aftermath… somewhat unexpected, to say the least.

The Hollywodo Reporter talked to Whitta and Miller about the story, and has a preview of the short, courtesy of DC.

This story isn’t what I expected. It’s a lot of fun.

Gary Whitta: Well, I’m glad you enjoyed it. We had a lot of fun writing it.

Greg Miller: Being a Batman fan, being a DC fan, that’s what drew me to the project when Gary was talking about it? The idea of, let’s do something that you don’t see in Batman media usually.

Whitta: And the fact that it’s its own story, outside of what they call the ongoing continuity of DC is currently doing, we have the freedom to do stuff that usually would not be compatible with that continuity. We can definitively kill Batman, and reveal that Bruce Wayne are one and the same. I always had this idea of that very first image: Lois Lane reporting live from inside the Batcave. You instantly know that something is not right in that universe, because no-one’s ever supposed to see inside there.

How did this story come about?

Whitta: Ben Abernathy at DC, I think, was a fan of some of the other comics work that I’ve done — I’m doing an original comic series at Image Comics right now called Oliver, we’re halfway through that run, and it’s been very well-received — and he reached out to me and said, ‘hey, we got this special Joker project coming up, would you be interested in contributing?’ I jumped at it because, I’ve done work for Marvel before but never for DC, and I’ve loved Batman, Superman, all these characters, for many, many years.

I pitched DC on a Superman comic many years ago, I’ve always wanted to get my foot in the door there. So when they opened the door, I jumped right through and started thinking of ideas. But then Greg, who is one of my best friends, I think also one of the most knowledgeable DC fanboys I know. (Laughs.)

Miller: When you approached me, I thought for sure it was going to be a traditional “Gary with a humblebrag,” you know? Just you saying, “Hey, I just wanted you [to know], DC reached out to me and they want me to right a comic book.” (Laughs.)

Whitta: I do on a lot of other projects. I do like humble bragging in front of Greg. (Laughs.) But I honestly couldn’t in good conscience take on a DC story and just brag to Greg about it. That would almost be cruel, knowing how much he loves DC, and would love to be a part of this universe. But it wasn’t a charitable thing; I really felt like the story would benefit from the DC fanboy knowledge that he had, and I think that really turned out to be the case. He contributed a bunch of really cool little details and I think they make the story kind of delightful for people that know their DC history.

So, Greg, you’re you’re the one who got to thank for all of the references, because this is full of references and callbacks. I was looking through this and there’s so much in here. You’ve put so much into these 6 pages.

Miller: It’s that thing where so much credit goes to Dan Mora, the artist. He went above and beyond. For me and Gary sitting down and talking about it, it was, “what are the definitive Batman moments? Where would you want to call back to? What would we want to see? Can we put that in there?” I really do feel that, when Dan read it, he went so much further with it. In the script, obviously, we talk about the giant penny [in the Batcave], we talk about the T-Rex, but it’s the fact of him getting in there and putting in the different Batmobiles, the giant Joker card, really taking all this stuff that all of us DC fanboys know and love and want to see — see the different batsuits there, to have the purple gloves from the first Detective Comics there behind Alfred, you know? He went above and going to really enhance what we’re putting in there.

Whitta: I want to be clear: I think, in general, in comics, with the writer/artist relationship, artists often get considered “less than” as a creator — like someone will refer to “Warren Ellis’ Transmetropolitan.” No, it’s Warren Ellis and Darick Robertson’s Transmetropolitan, they both created it. We want to make sure that Dan get his credit on this, not just for the artwork, but specifically about some of the Easter eggs. Some of those were just Dan! Some of those weren’t on the page.

Miller: And so when we sat down, and Gary was talking about this idea and where we want to go, killing Batman and having this conversation between Lois and Alfred really struck home for me. It was not too long after reading more of the recent stuff by Tom King and Tom Taylor, what they were doing with Batman, and the annual with Father’s Day. I really wanted to bring that in. Why would Alfred be motivated to bring people to the Batcave? Because, you know, he wanted the world to know who truly his son was. I really wanted to say that.

Whitta: I think Alfred would, obviously, find this really tough. I think it’s maybe only in the wake of Bruce Wayne’s death that Alfred really realizes how much he personally, really did see himself in this father and son kind of relationship. I think, like Greg says, a few comics have kind of touched on that.

This is, of course, a story from the Joker 80th Anniversary Special, and I think you do something really interesting with the Joker relationship in this, where you address where the Joker is with the idea of where he is mentally without Batman, without Bruce Wayne.

Whitta: I think for me, that idea came from the idea of, you know, all throughout comics and Batman and Joker history, the Joker is really pushing the idea that Batman needs the Joker, you know, “you’re nothing without me, you need the other side of the coin.” The idea that there is this symbiotic relationship. I liked the idea of flipping that around: What is Joker without the Batman like? He’s been trying to kill the Batman for years, but what if he actually succeeded?

So now he’s having this existential crisis where he realizes that the only enemy he’s ever respected, as he says in the comic, the only audience who ever understood the joke that he was trying to tell is gone. So now he realizes that without Batman, there isn’t really anything left for him to do. There’s no-one that he respects enough to appreciate what his anarchic criminal comedy routine is all about.

Whitta: I actually think that one of the better Batman movies in recent recent history is The Lego Batman Movie. It’s actually really good, and the idea that the Joker desperately needs to be in this relationship with Batman, — I think throughout comics history, that’s been expressed far more as ‘Batman needs the Joker,’ how much he needs to look like a nemesis to fight against, a worthy adversary, but I don’t know to what extent that’s really been explored from the Joker’s side of it. So that, for me, was the catalyst to the story.

This is a Joker story, and you end it with a joke — which is, of course, a logical idea, but somehow still feels surprising and great. Did you always know you were going to finish with a literal punchline?

Whitta: Oh, yeah. For me, we knew that back in the beginning. We knew that we’d have the death of Batman, and the Joker realizing that there’s no point to being the Joker anymore. But until we had that final page turn, we didn’t know if we had a story.

You could have a more serious version of this, where he became a cop or something, which would have felt very timely right now, and that could’ve been a really interesting personal story. But for a short story in a celebratory book like this where we’re celebrating 80 years of the Joker, we really wanted to end it in a funny way. What is something that everybody is irritated by? If he wants to continue making people miserable and fucking with people, and playing silly games, this is really where he’d go. 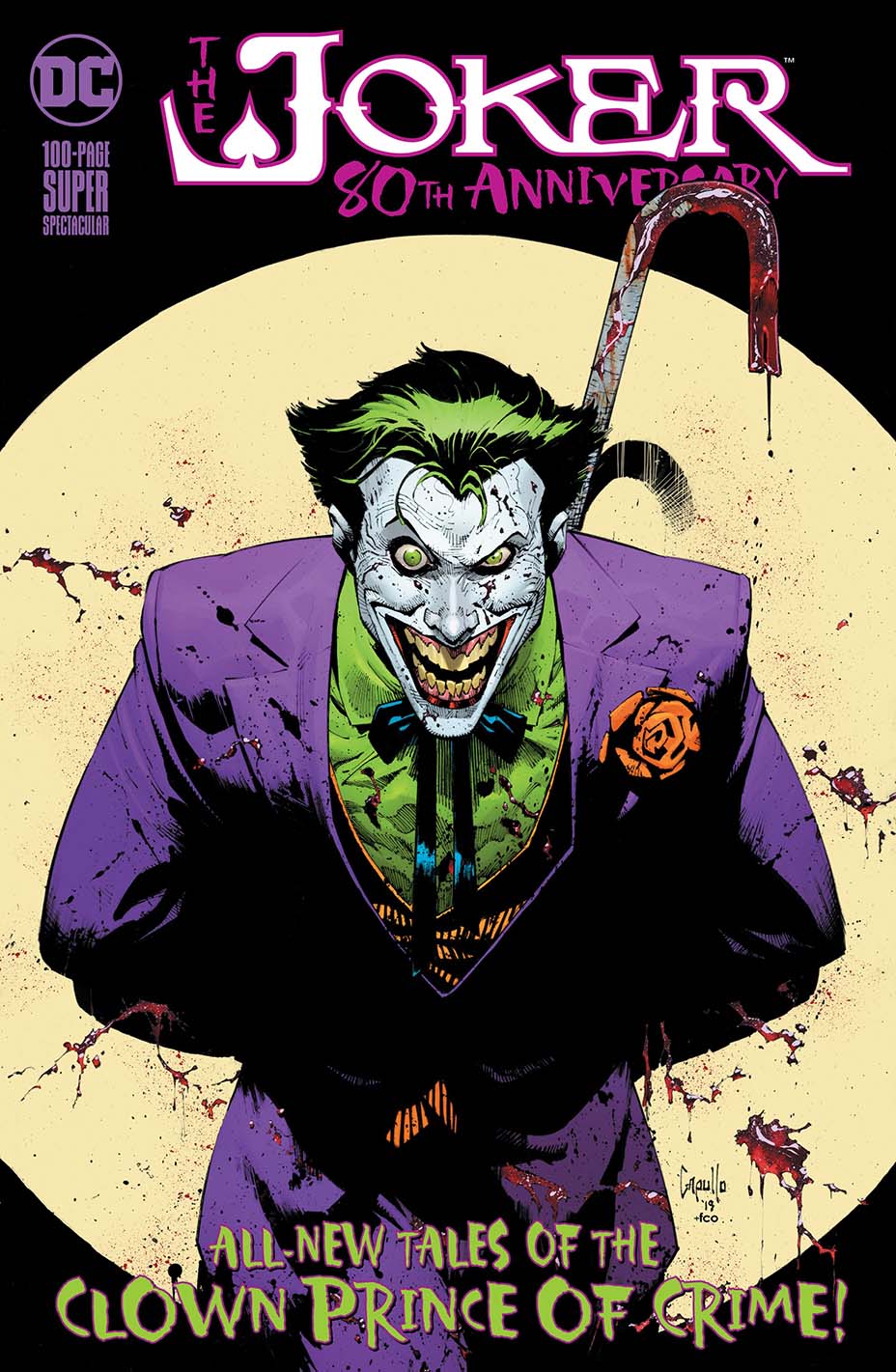 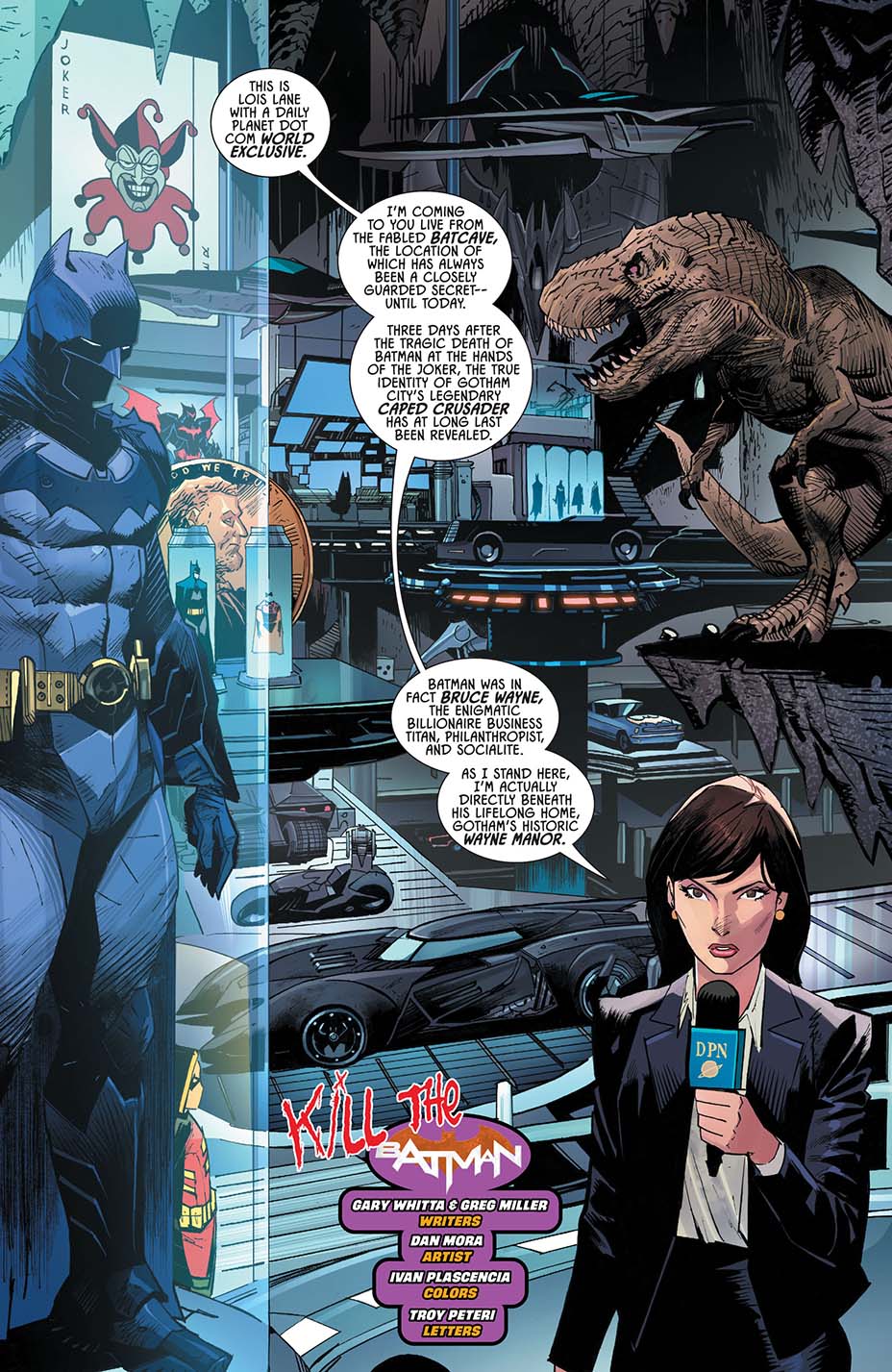 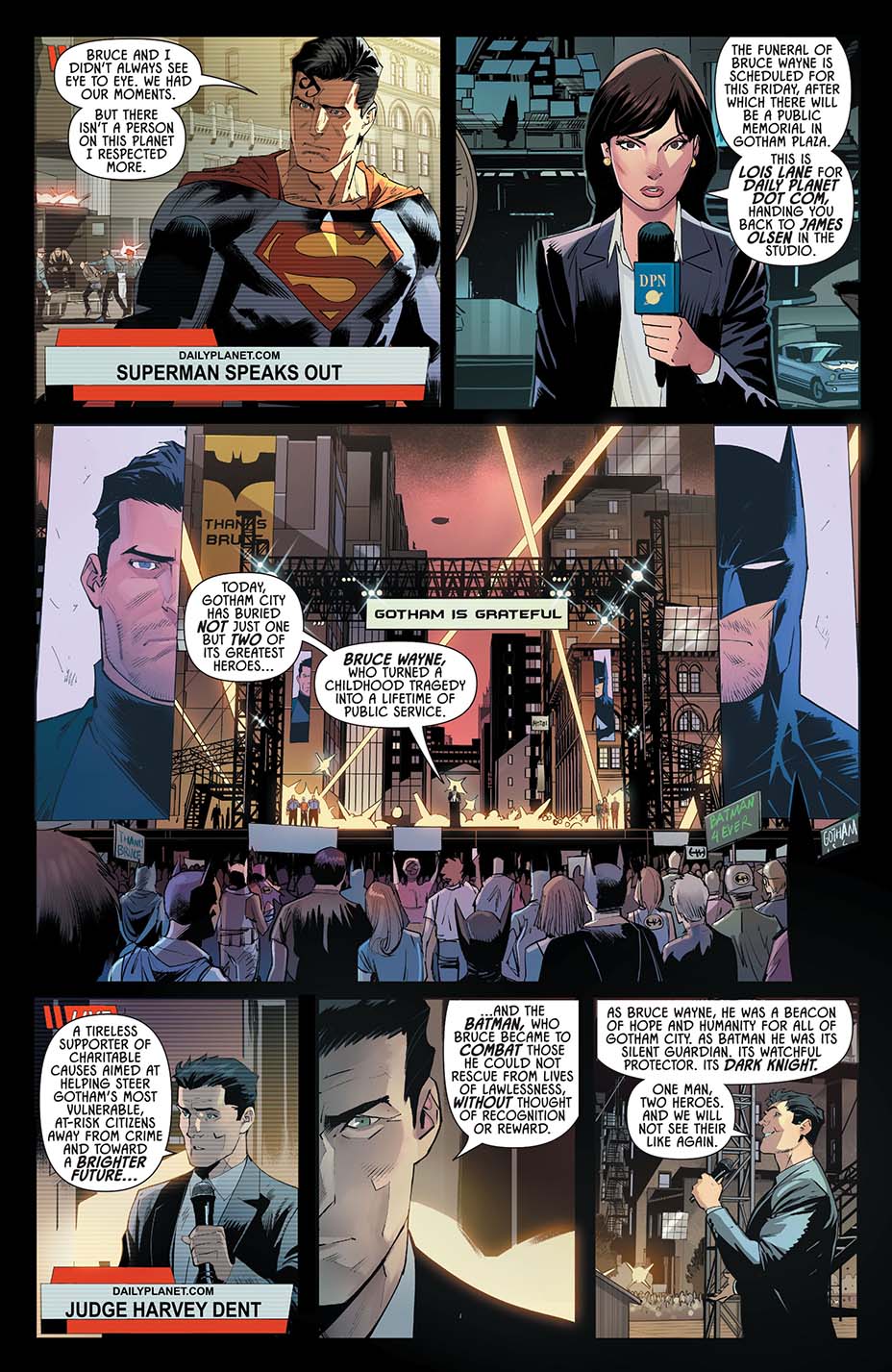 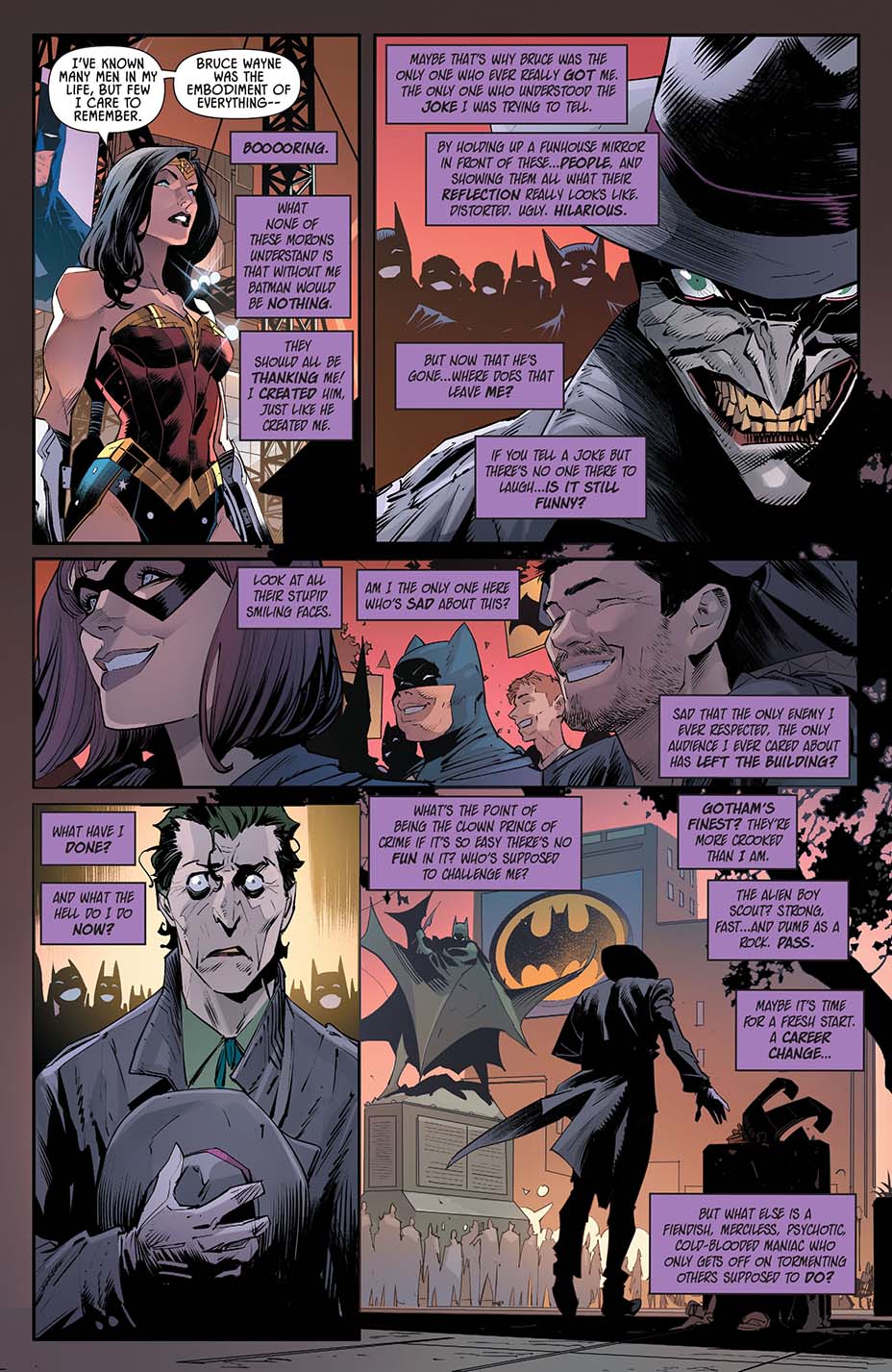