Three months after the release of Black Panther, Chadwick Boseman turned up in Washington, D.C., to speak to the graduating class of 2018 as part of his alma mater Howard University’s 150th Commencement Ceremony.

Not only was it a milestone event, but his appearance had special significance to university president Dr. Wayne A.I. Frederick. Since assuming his post in 2014, Frederick made it a mission to invite distinguished alumni like Sean Combs (2014) and Sen. Kamala Harris (2017) to the podium during commencement events. He wanted speakers that felt more of the moment in the hope that their contemporary success could appeal to young adults about to set off on their own paths.

When Boseman took the stage that May, there was perhaps no one better to fit the bill.

Ryan Coogler’s Marvel superhero flick with Boseman in the title role was still in theaters, inching closer to $700 million at the domestic box office on its way to $1.34 billion worldwide. It would be nominated for seven Academy Awards and celebrated for providing a new standard for Black representation in Hollywood.

Understandably, “the response was overwhelming,” Frederick tells The Hollywood Reporter of the energy on campus for Boseman upon his arrival. “People were absolutely excited to hear from him.”

But Frederick says there was something surprising about Boseman’s emotions, considering here was a movie star who led and had just launched a global franchise after having played icons like James Brown, Thurgood Marshall and Jackie Robinson. “He was uncharacteristically nervous,” says the president, who cites the crowd at being upwards of 20,000 strong, with countless more tuning in online and on the Howard University TV station. “It was a sign of how much it meant to him.”

As with everything he did, Frederick says Boseman delivered. “The crowd could feel the genuine energy coming from him. He lived so much in the moment and he soaked it up. It was one of the best.”

Clips of Boseman’s speech circulated far and wide over the weekend following shocking news Friday that he had passed away at the age of 43 following a private four-year fight with colon cancer. Even vice presidential candidate Harris tweeted out an eight-minute clip of his address at “Wakanda University,” praising her “friend” for the part of his speech when he said this: “Whatever you choose for a career path, remember the struggles along the way are only meant to shape you for your purpose. As you commence to your paths, press on with pride and press on with purpose.”

The speech — now viewed millions of times — is being embraced in a new light for many, including Frederick, with the revelation that Boseman delivered it amid his colon cancer battle, which, according to the statement of his death posted on his official Twitter account, included countless surgeries and chemotherapy. “I’m thinking of the courage,” Frederick says, “because that was an opportunity where his speech could’ve been about his diagnosis, making it solely about him, but he resisted that.”

How many of us would have been able to do that, Frederick wonders: “To share that fight and that journey would have left us sympathizing with him. The fact that he resisted that urge and instead focused on humility and his own struggles so that the students could relate to that. It says so much more about him. I reflect on that time now and, again, it shows his grace — not just his humility but his grace. We think of it as shyness or weakness, but it’s strength, because he was so confident in who he was.”

Boseman did address struggles, but in a way that would be more ultimately optimistic to the grads, by sharing anecdotes of how he persevered through his own challenges in his acting career to achieve the success. Frederick says he was moved by Boseman’s speech because he didn’t stand up there and give the impression that his success in Hollywood came easy or overnight.

“Sometimes you need to get knocked down before you can really figure out what your fight is and how you need to fight it,” Boseman told the graduates. “Whatever you choose for a career path, remember, the struggles along the way are only meant to shape you for your purpose. When I dared to challenge the system that would relegate us to victims and stereotypes with no clear historical backgrounds, no hopes or talents, when I questioned that method of portrayal, a different path opened up for me, the path to my destiny.”

Frederick says Boseman credited his tenure at Howard with helping him crystallize his purpose and gain the confidence to stand up in situations like that. “He had an ability to relate [to others]. You see somebody like that and as a young person you might think it was easy, but he spent his 20s and part of his 30s toiling and finding his way. He practices his craft in such a dedicated fashion and he was as much a writer as he was an actor,” he continues.

And a private one at that. In the days since his death, even close collaborators like Coogler and Da 5 Bloods filmmaker Spike Lee have said they were not aware of his private colon cancer battle. “He never let on about it,” Frederick says. He had dinner in Los Angeles last year with Boseman and alum Phylicia Rashad to discuss the university’s Fine Arts program. Frederick noticed that Boseman looked “smaller than he had been,” after having lost weight.

The university president presumed it was for a film and even asked Boseman how difficult it was to change weight so rapidly for roles. “In his usual style, he gave a long, detailed answer, explaining that he was a vegetarian and was exercising and trying to take care of himself and do what he had to do,” he explains. “It was a very thoughtful response, never letting on that anything else was happening.”

It was such a deflection that characterizes Boseman’s integrity. “One of his greatest attributes was never burdening anyone else but being there to shoulder everyone else’s burdens.”

Processing death is a personal journey, and Frederick says he’s still finding his way through the conflicting emotions, but instead of focusing on sadness, he’s looking at the example Boseman set because it brings him joy.

“I feel strange,” he says, “I am overjoyed, not that I got to know him but that he lived and in doing so, he taught us how to live fully and how to embrace life through all its opportunities, flaws and weaknesses. I don’t think he hid from any of those things. He wore them gracefully. His ability to set that example is so touching and that, to me, is what is resonating now. He lived fully. His time wasn’t short. He maximized what he had.” 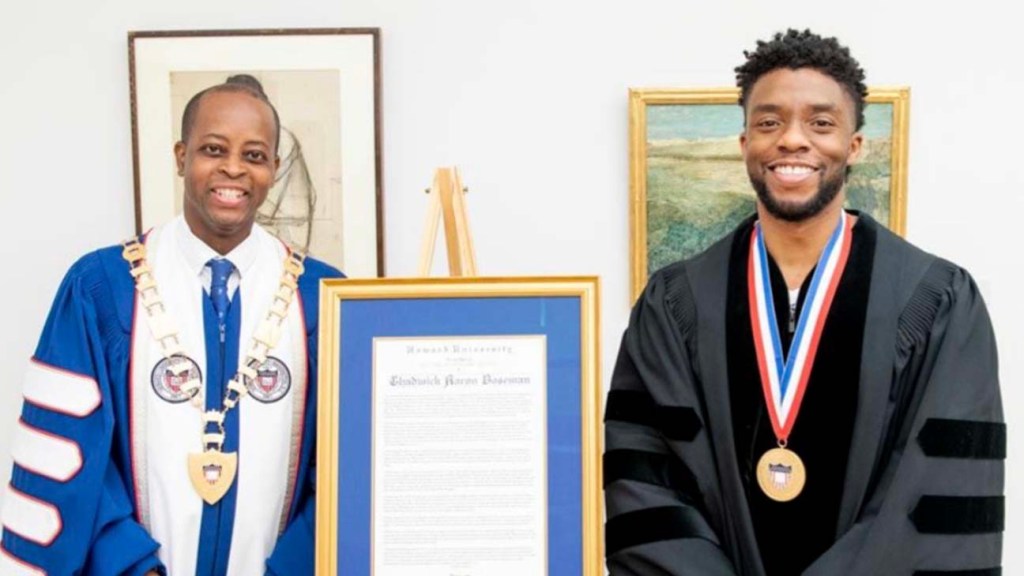