Continue to The Hollywood Reporter SKIP AD
You will be redirected back to your article in seconds
Skip to main content
April 28, 2017 1:02pm

What was meant to be a luxurious, three-day music festival in the Bahamas district of Exuma quickly crashed and burned this weekend. Fyre Festival-goers arrived in the Caribbean island paradise to find little-to-no staffers, nonexistent rooms to sleep in and complete disarray — despite being promised (and paying thousands of dollars for) a deluxe festival experience.

Amanda Riley, 22, was one of the models and Instagram influencers invited by the festival to attend for free, in exchange for promotional posts on social media. Below, she recounts to The Hollywood Reporter the chaos of the past 24 hours.

I was in L.A. about six months ago when I was offered these tickets — everything paid for. The organizers were trying to get a lot of promotion from models. A couple of friends and I were going to go; everything was paid and comped in exchange for a couple of posts to help them with marketing. But I also have friends that spent thousands of dollars and are now worried that they’re not going to get refunded.

On Tuesday I had a red-eye flight, got to New York and my bag got lost. It was my plan to go for four days. I landed in New York; I had to go to my apartment. It turned out I actually had to move all my stuff into storage because I can’t move into my new apartment until May, so I didn’t have my apartment for the week. Perfect timing, I thought, I was going to the Bahamas.

Fyre Festival 2017: What Bella Hadid and Other Models Promised Vs. What Attendees Actually Got

So I hopped on my flight. I was by myself because my cousin, my plus-one, wasn’t supposed to come until today. I landed in Miami, and there were all these kids. It was all a bunch of really good-looking, super-excited people. Everyone was super pumped, but suddenly there was all this controversy and all these rumors were going around about the festival.

We were at the gate in Miami and we all had our wristbands, and I started getting texts from a really good friend of mine who was in the Bahamas. He said it’s an absolute disaster: “Don’t come.” And I thought, “Well, I didn’t pay for anything, and we were supposed to be in villas (not the tents).” And apparently, these tents weren’t even made. There was no air conditioning, the beds were soaking wet and people were outside in the pouring rain.

I was getting tons of photos and videos from people that were there. For example, a photo of a Styrofoam box of chopped up romaine lettuce, two slices of bread and a piece of cheese on it that was supposed to be a meal.

One group on-site didn’t have their suitcases because they landed in the Bahamas and the festival staffers told them, “Oh, go hang out at the beach. We’re going to assign you rooms.” They were on the beach for six hours, with none of their stuff. And so a couple people found a local hotel and grabbed their bags. Other people weren’t as lucky and wound up without a place to sleep.

My ex-boyfriend was still in the Bahamas and slept at Exuma’s airport overnight, because they kept telling them there was a flight coming like every 30 minutes. They didn’t end up leaving the Bahamas until 9 a.m.

And now everyone I know is safe and back in Miami after figuring their own thing out. But they spent all this money and now they don’t have flights back to L.A. or New York or anywhere until Sunday or Monday. They also had to front all this money for hotels and things that were supposed to be already paid for.

I got lucky since I didn’t pay upfront for anything. Worst case I have to buy one flight back to New York, but that’s probably about it. The people that gave us these promotional deals and marketing packages said that whatever we have to pay for, they’ll reimburse us. They also got my flight separately from New York to Miami, so I’m just kind of waiting for what happens Sunday. I don’t really know yet.

I met a bunch of people at the airport, and I met these two girls from Orange County and they said that they spent $3,000 each on an all-inclusive hotel, flight, food, whatever. And there was general admission, VIP and the artists’ black wristbands. There were different hotel accommodations, everything. And then others had the very minimal general admission, in a tent. And they spent $3,000. And I’m getting all these emails from Fyre saying something like “Sorry about this confusion and the outcome of this. We’re going to reimburse you.” There’s another email that says, “Please hold off. We’re going to reschedule.” So people are worried they’re not going to get reimbursed now or they’re trying to hold their money and do it again. It’s a big mess.

I’m staying out of it because I’m kind of complete with it. My friends and family are safe. And I didn’t pay for anything. So I just don’t want anything to do with that company anymore or deal with these people.

The multiple emails sent by festival organizers to attendees on Friday: 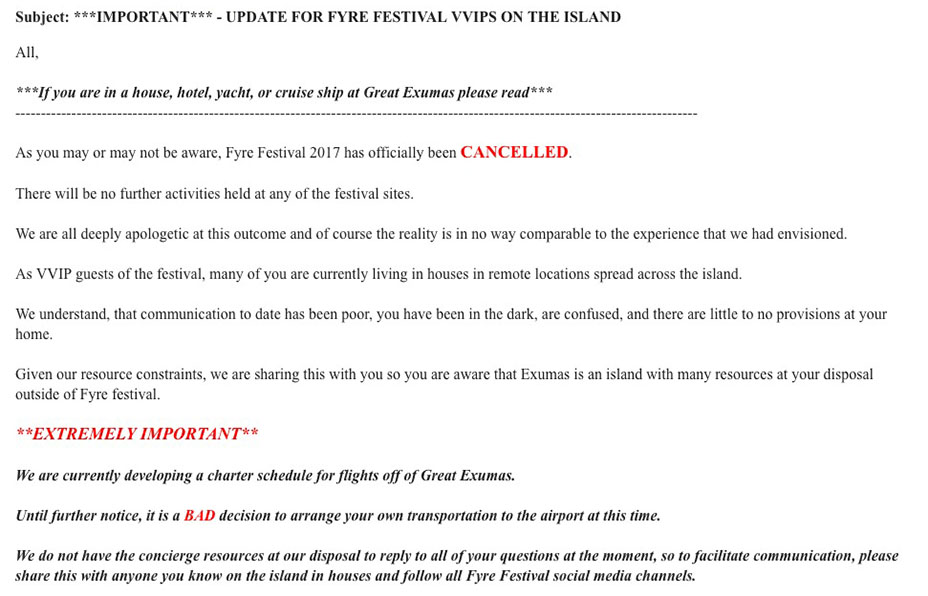 Pretty bummed Fyre didn’t work out but grateful everyone is safe!! Oh man that was scary.. Met up with some great friends and decided to stay in Miami for the weekend New set from @kiernanmichellephotography just in and I am in loveeee Coming soon on my fb page and you know where that link is#LifeOfAmandaRiley