I’ll admit I was equal parts intrigued and frightened when I was invited to Pittsburgh by Uber to test their self-driving vehicle program. In my opinion, Uber works just fine the way it is: For the most part the drivers are courteous, I get a safe ride home with no worries after a few drinks and I never have to wait for a taxi or carry cash. Plus, I love grilling my drivers about everything from their “other careers” to what they do for fun.

After landing in Pittsburgh and being picked up by a regular ol’ Uber to make my way to the hotel, the excitement had set in and I was ready to jump headlights first into the future — which I still imagine to be somewhat like an episode of The Jetsons — although to my knowledge there are no plans as of yet for self-flying Ubers.

Meeting me there was a Volvo XC90, one of a fleet of more than 200 cars that are on the streets of both the Steel City and Tempe, Arizona. The goal? To revolutionize the world of transportation technology. This wasn’t any ordinary Volvo, though. For one, there was a crowd of people around it taking pictures, selfies and talking to both the man in the driver’s seat and the front-seat passenger.

A driver? In my self-driving Uber? Upon entering the backseat — where I was greeted by the aforementioned humans — I learned that presently it takes two operators to pilot this self-driving vehicle, along with a multitude of technology that the consumer will never see. Developed through an integrated partnership with Volvo, these SUVs have a 360-degree system of cameras, lasers and radar that scan the environment and make sure the vehicle is attuned to everything around it. The LIDAR, visible on the roof, also gives its identity away to curious Pittsburgh residents who love to snap and lookie-loo at the cars when they are out and about. Yes, self-driving Uber have become celebrities in their own right around this town. 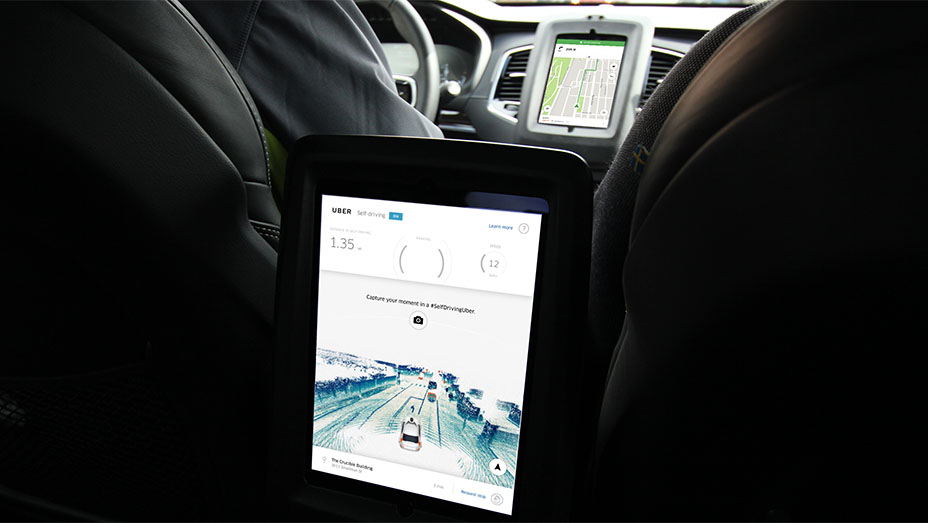 These vehicle operators aren’t your standard Uber drivers: They are part of a software-updating program to monitor the car’s performance, register rider feedback and update the extensive proprietary mapping system identifying each lane line, road sign and traffic light in the vehicle’s path. My biggest question was, “When will I see the car drive itself?”

After our introductions, I learned that the driver would put the car into autonomous mode — where it drives itself — while I watched the map from the backseat tablet. Like a driver’s ed teacher, he would intervene if necessary for any unexpected hazards. The passenger was there to take notes, listen to my feedback and answer questions.

Finally, we were ready to roll hand-free. A tablet in the backseat showed where the car was heading and exactly when it kicked into autonomous mode. I couldn’t help but welp out a “that’s so cool” as the car moved on its own, fluidly reacting to curves in the road, left-turning cars and pedestrians crossing the street. When an oncoming car unexpectedly crossed over into our lane for a brief second — and the Volvo swerved to miss it without missing a beat — was when the power of this technology hit me hard. 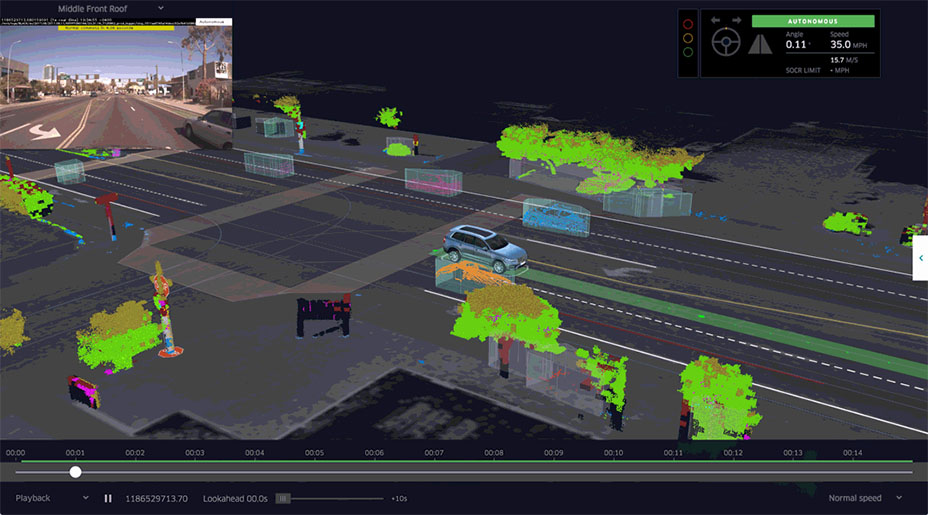 Self-driving cars, for the most part, eliminate human error behind the wheel. They are quicker and less distracted than humans are and their eyes are always on the road. But ultimately, the passenger must trust the car to do its job, which may be the biggest learning curve of all.

The tablet in the backseat was a big part of the trust and comfort I started to develop with the vehicle. And when Ubers are one day truly driverless, the tablet will be the only comfort with the fixed environment noted in blue and orange signifying new objects. It helped me understand what the technology was doing, and showed me if that if there was a bicyclist on the road, the car would decelerate, pause and brake. This car understood its environment better than I sometimes do as a driver.

My ride, fittingly, took me to the mothership and home of Advanced Technologies Group (ATG), the self-driving business arm of Uber, occupying 12 buildings in Pittsburgh’s up-and-coming Strip District. Inside this techie paradise, software and hardware engineers, roboticists and machine-learning specialists feast on round-the-clock catered meals and juice up on an endless supply of cold brew while researching and developing new phases of the technology to improve the current fleet or work on future iterations of the vehicles.

It is here that I met Emily Duff Bartel, a senior project manager for ATG. Duff Bartel has a background in information systems, game design and digital media. She attended Carnegie Mellon and the University of Southern California. She is focused on the in-car experience and bringing people into the new technology, making them feel comfortable and familiar with it. “It’s a blend of computer-science principles behind information systems, and then the data experience and immersive media background from my film studies,” she says as we discuss my experience with the car and I quiz her about consumer trust and what the future will hold for this pilot program as it turns from research and development to reality.

“It really is about the safety. There are 1.3 million people who die in road crashes each year,” Duff Bartel says. “Self-driving really has a chance to improve those numbers significantly.” (Yes, a self-driving Uber was hit in Tempe earlier this year, but the Uber was found to be not at fault and the accident was due to a blind spot created by traffic congestion.) 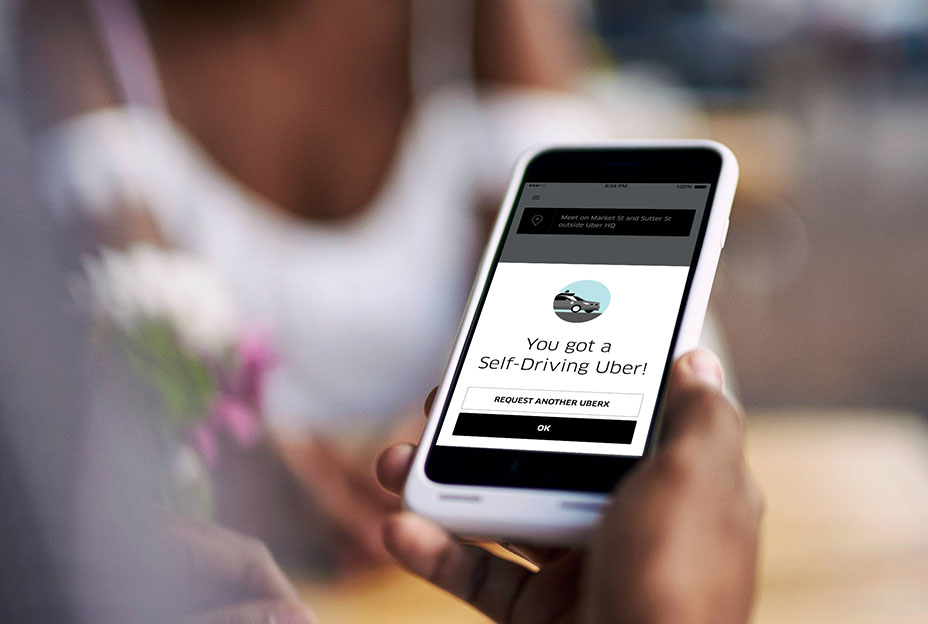 To me, Pittsburgh seems an unlikely and rather obscure place for such a program, but Duff Bartel says that for development purposes, it is the perfect fit: The roads are narrow, hilly and bumpy, and a multitude of weather conditions exist, such as rain, sleet and snow. The other pilot city, Tempe, has wider, higher-speed roads and nicer weather. “We can find the opposite there, so that means that we’re not necessarily over-fitting for one particular condition, but we are building a broader software platform and approach,” she says. There are no plans to unveil the pilot program in any other city. “Our focus is really on the software development,” Duff Bartel says.

For now, if you call a regular UberX in Pittsburgh, you could be randomly paired with a self-driving vehicle. Riders receive a notification of the match and that the service will only work for trips with three or fewer passengers, due to the vehicle operators. Duff Bartel confirmed that the paparazzi scene I witnessed at the beginning of my journey was indeed typical, and any nervousness for consumers is quickly replaced by “Holy shit, that’s awesome,” when the full experience kicks in.

“It’s still like day one when some of these cars drive down a street,” Duff Bartel says. “People are just immediately craning their necks, and the same in Tempe. They’re really exciting to see it, and it’s something that the city as a whole has really embraced. The people who are a little trepidatious to get in the vehicle end up loving it the most. There are some people who would say, ‘I don’t know if I would do it, I’m hesitant on the technology,’ and then they’re like, ‘To heck with it. We’ll give it a shot.’ It’s actually just like a regular car ride. You forget that you’re even in a self-driving vehicle.”

Realistically, Duff Bartel notes, it could be decades before self-driving Ubers roam the streets on their own, and they won’t be the perfect fit for every type of rider, nor are they meant to put human drivers out of business.

“You can imagine that if you’re at a large event and a bunch of these cars pull up, everybody gets in their own. Bob the driver’s not there to tell you that you’re in the wrong car and that he’s going to take you somewhere else,” Duff Bartel says. “We’re very much in the R&D phase.”

On my ride home, I played with the tablet a bit more. It wasn’t equipped with all the bells and whistles yet, though one day it will have the standard touchpoints that Uber riders have come to expect, such as temperature and music control. For now, the best part was that I could use it to take a selfie in my self-driving Uber — a fitting present-day end to my short trip into the future. 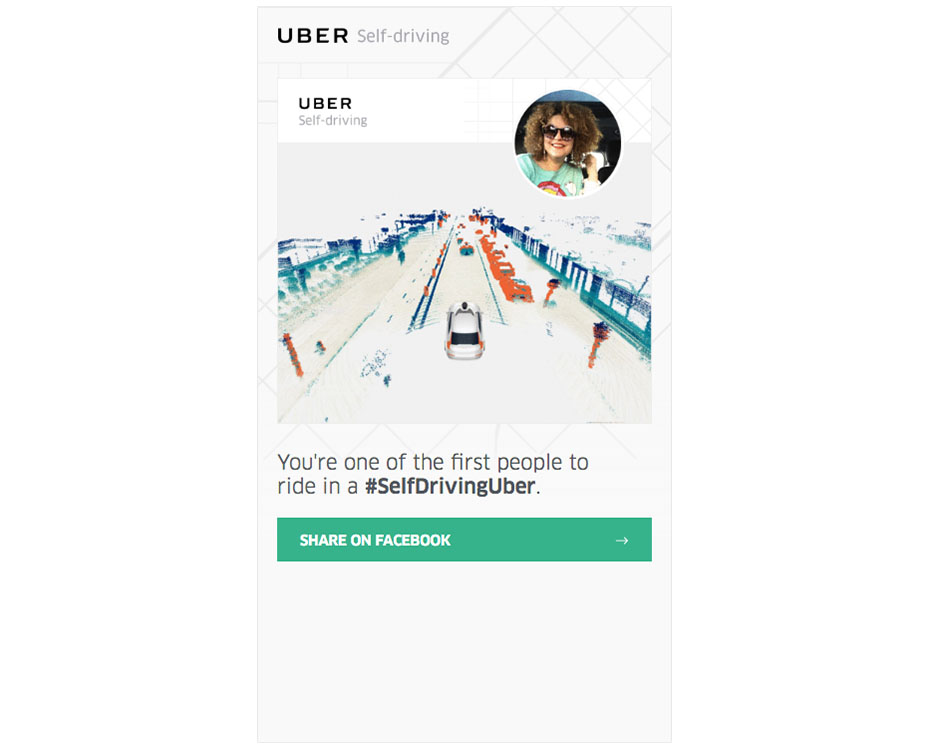