Twenty-five years before Crazy Rich Asians, The Joy Luck Club blazed fresh passage for Asian-Americans in Hollywood, and I was a part of it.

Getting a job on the Hollywood Pictures (a now-defunct label of Walt Disney Studios) film as an office production assistant and occasional set P.A. was a miracle in and of itself. A friend of mine, Christina Lee, worked at Paramount Studios at the time and tipped me off to the job. She said it would be a great opportunity to break into the business. One catch: I was required to be fluent in Chinese. I was barely fluent in Chinglish. Growing up in L.A. and Orange County, my parents spoke Mandarin Chinese to us kids at roughly kindergarten level much of the time; therefore, whenever I spoke Mandarin, I sounded like a Chinese Mister Rogers. I asked my mom to teach me how to say “director” and “script” in Mandarin, words I never thought I’d ever need to know in my life.

I also had to “work around” the fact that I had zero experience in Hollywood. I didn’t know the difference between a production report and a mileage report but got a crash course from friends working in the industry. My production office boot camp educated me on everything from collating a script to brewing the all-important pot of coffee — the one thing they couldn’t school me on was my janky Mandarin.

Forging forward, I faxed my (heavily-faked) resume and waited for the phone interview. When the production coordinator called, I was mostly ready. (By then, I even knew what a production coordinator did.) I could hear her rustling my resume, muttering the made-up titles of films I worked on, and then she questioned me about my responsibilities on my bogus productions. I answered to her satisfaction. (This was the early, pre-consumer internet ’90s. You could get away with this stuff.) Ultimately, she asked the dreaded question: “Can you speak Chinese?”

“Sure,” I lied, crossing my fingers that there wouldn’t be some kind of exam at the end because I did really badly in Chinese school. Fortunately, the production coordinator (who was not Chinese) seemed quite relieved and didn’t grill me further, offering me the job.

In hindsight, I suppose it’d be fairly tough to hunt down a Mandarin-speaking P.A. on such short notice, considering how few people of Chinese descent were in film back then. The coordinator explained that, if necessary, I might be asked to translate on set for some of the actors from China. I’ll cross that bridge when I come to it, I figured. As far as I was concerned, I’d dodged a bilingual bullet. My start date was in two days, which gave me one day to quit my job as a busboy in Orange County, pack my stuff and move up to the Bay Area. 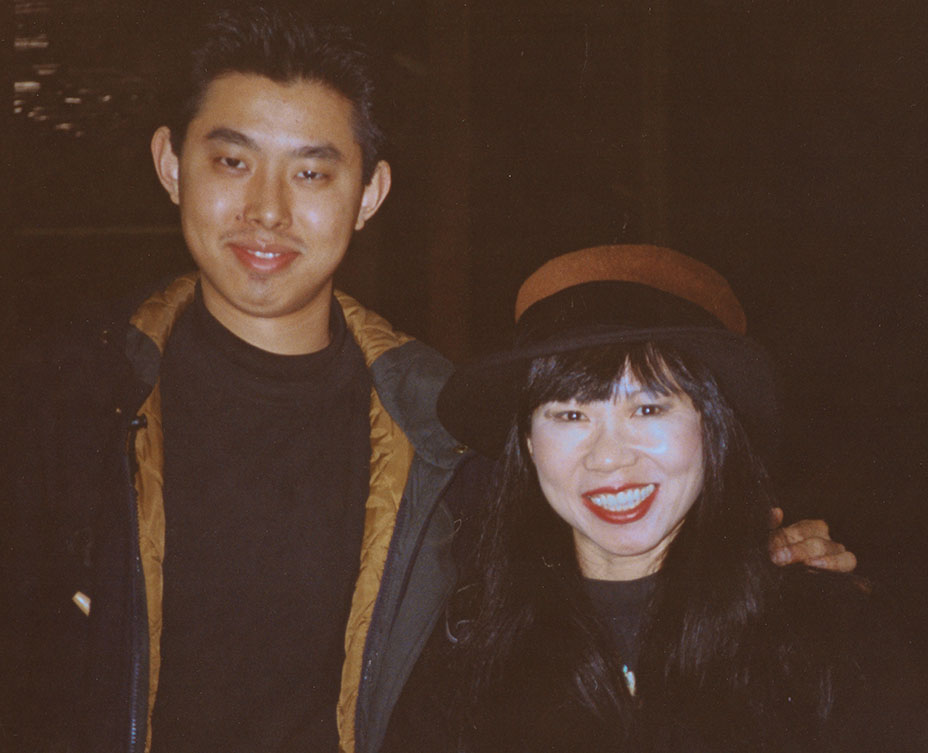 I can vividly recollect my first images of The Joy Luck Club from day one at work. This scene was set in China but shot at our stage in Richmond, near Berkeley. It was the dramatic reveal of child-bride Lindo Jong (Irene Ng), stunningly photographed in a frame dripping with sumptuous reds and golds. This was the daily I was shown at the film processing lab. At that moment, I knew The Joy Luck Club was destined to be a part of cinematic history and a work of art that American movie audiences had never before witnessed.

Much of the China interiors were shot at that Richmond soundstage, converted from an old chocolate factory that was transformed into pre-Communist-era China. All of the details were physically there. Nothing was left to imagination: From an intricately dressed set for the lavish courtyard of well-heeled Chinese to a humble home complete with hanging lap cheong sausages, all was onstage. Although I had never been to China at that point in my life, I felt as if I were teleported across the ocean and back in time whenever I stepped on set.

It’s evident onscreen that the cast was comprised of mainly Asian-Americans, but the crew was made up of quite a few Asians too. Obviously, Wayne Wang was integral in directing The Joy Luck Club and getting the project off the ground. The sound department, camera operator, editing and assistants all had Asian hires. However, it wasn’t all peace, love and harmony. According to film editor Maysie Hoy, who is Chinese-Canadian, when she and her Chinese assistant were hired to take over from a white editor and his white assistant, the white assistant jeered, “Round eyes are leaving now.” I still remember this story, decades later, because it shattered my erstwhile idyllic experience of working on my first Hollywood movie. When replacing staff — an unpleasant albeit routine occurrence — results in a racially charged remark, something is wrong.

Fortunately, all of that wrongness vanished whenever I visited the set. Watching filming take place was like seeing magic performed. The atmosphere felt electric. Witnessing Russell Wong in person as he acted out the infamous, innuendo-laced watermelon scene made me and the rest of the crew blush. As much as The Joy Luck Club has been criticized for negative portrayals of Chinese men since its release, I was just happy to see Chinese men on the big screen with some semblance of sex appeal — a virtually nonexistent concept that has resulted in the dismal lack of leading Asian-American men in film and television to this very day (which is why the abs and matinee-idol charisma of Crazy Rich Asians‘ men was such a welcome innovation).

Eventually, my Mandarin “skills” were called into action. The second A.D. requested I show up to location somewhere in San Francisco. Upon my arrival, she led me to an actress from China who spoke very little English. The A.D. stood by as I attempted to explain to the actress which part of the script she was to perform that day. So I introduced myself to her by saying (in Mandarin), “I’m sorry. My Chinese is bad.” The A.D. seemed pleased to hear something Chinese-ish coming out of my mouth. Mercifully, the actress simply looked at me, grinned and said, “It’s OK.” While the A.D. was preoccupied on the walkie, I pointed to portions on the sides the actress needed to learn. This situation was the extent of my translation duties on The Joy Luck Club. My finger did the talking.

In February 1993, as the production geared up for China, my time on the show was up. I officially wrapped. My parents were more relieved than proud when the movie was done for me. In typical old-school Chinese fashion, my father asked me if my boss said I did a good job. “Was it a job well done?” he said. I answered yes. He then asked me if I was going to get a real job now, i.e., something not in the entertainment industry.

In many ways, my dad’s question about getting a “real job” reflected the attitude of many in the Asian community regarding show business — that it’s not a career. Furthermore, many believed that it’s a world only for “mainstream” America, the implication being that Asian-Americans are not a part of that landscape. Therefore, the struggle wasn’t just with the Hollywood system, which was already daunting and seemingly insurmountable, but also within the Asian-American community and the notions of its prostrate place in American society.

Upon completion of The Joy Luck Club’s production in the U.S., the producers threw a humble wrap party at a local pub with a few pool tables for amusement. This was a low-budget affair compared to other wrap parties I would attend in the future. Still, it was my first. I sat back with my beer and watched the castmembers, including rising star Ming-Na Wen (who played June), shoot some stick. I couldn’t help but feel like I was a part of something only just blossoming.

The Joy Luck Club seemed to have it all, and my Asian-American entertainment colleagues all agreed at the time that this was a new beginning for the community. Here was a major motion picture that captured the Asian-American experience like no other film had done before, starring Asian actors and backed by a Hollywood studio along with big-name producers. Even Rosalind Chao, who played Rose, said as much in an interview. However, a whole generation would pass until something like The Joy Luck Club happened again.

I suppose the story I’m telling is a cautionary tale, a warning to keep the exuberance in check until Hollywood really does come around and makes being Asian onscreen a non-newsworthy event. But perhaps this time it’s different. Maybe #OscarsSoWhite and #StarringJohnCho were thorny enough to get under the skins of executives. Could it be that Fresh Off the Boat rocked the boat hard enough to make waves? Or have Asian-Americans become more passionate and active about being represented in media?

My own Chinese parents watched The Joy Luck Club in a movie theater, which was a big deal because my family didn’t go to movies. When Star Wars came out, I didn’t see it until it was re-released for the fifth time in theaters, back in those pre-video, pre-rental, pre-cable TV days. So when my parents went to see a landmark Asian-American film that I worked on in an actual theater, I was nervous to find out what they thought. “This story is nothing special,” my mom said. “Everybody’s life was like that coming from China. Why is this movie great?” (Ironically, her critical comments echoed those of the mothers in the film — I could almost hear composer Rachel Portman’s lachrymose title score as my mother was speaking.)

The Joy Luck Club, although considered a critical darling, achieved modest numbers ($57 million domestically in today’s dollars) in ticket sales. In contrast, Asians and non-Asians alike enthusiastically supported Crazy Rich Asians in theaters. The online grassroots movement for the film before and after its release was at a fever pitch and practically unavoidable. If you had a vaguely Asian friend on social media, she or he was hyping the movie, which ended up doing crazy great business for Hollywood, breaking box office records and becoming the highest-grossing rom-com in a decade. Who knows? If social media was around during The Joy Luck Club, perhaps box office receipts would’ve been higher.

But is it strictly about dollars? Maybe like the story in Crazy Rich Asians, it’s not only the money that matters. My mother may not have appreciated the marvel of seeing Asian-American lives on the big screen back in 1993, but the community today has changed. Maybe it’s the 25-year drought that made us really, really thirsty, but now that we’ve had a taste of representation, we’re not about to stop drinking.

Eddie Lin is a food writer and author of Extreme Cuisine and has appeared on Top Chef, MasterChef and Gordon Ramsay’s 24 Hours to Hell and Back.