The surest way to get as pickled as the self-deceiving regulars at Harry Hope’s downtown New York dive bar in The Iceman Cometh would be to take a shot of whiskey every time someone says “pipe dreams.” Eugene O’Neill was seldom one to go easy on emphatic repetition of his themes, and the playwright’s bleak vision of men drowning their deferred plans in cheap booze can be as prolix as it is poetic. George C. Wolfe’s revival feels on some levels like it’s still cohering, the underlying despair remaining muted for too much of the three-hour-45-minute running time. But it comes together in a powerful final act driven by the searing confessional monologue of Denzel Washington’s Hickey.

There’s a symphonic quality to this brawny four-act 1946 drama, with its flavorful early 20th century New York vernacular and its cast of 17 major characters all doing their best with their big talk to fool themselves about the hollowness of their stalled lives. Wolfe has assembled a talented ensemble, almost all digging deep into their characters. Their individual stories have a unique music as they blather on about a past that was probably never quite what they claim, and a future that they refuse to concede is fermenting in the bottom of a glass. The production perhaps could have used a longer preview period, since the choral aspect of the performances is still one step behind the solo work. But it’s compelling enough to suggest the ideal balance will come.

The revival cometh to town just three years after the sellout Brooklyn run of Robert Falls’ blistering production, which starred a corrosive Nathan Lane as Hickey, and featured indelible performances from Brian Dennehy, Stephen Ouimette and John Douglas Thompson in significant roles. That seasoned ensemble had first performed the play three years prior at Chicago’s Goodman Theatre, so by the time they reached New York their characters were like second skins, stained by smoke and liquor. 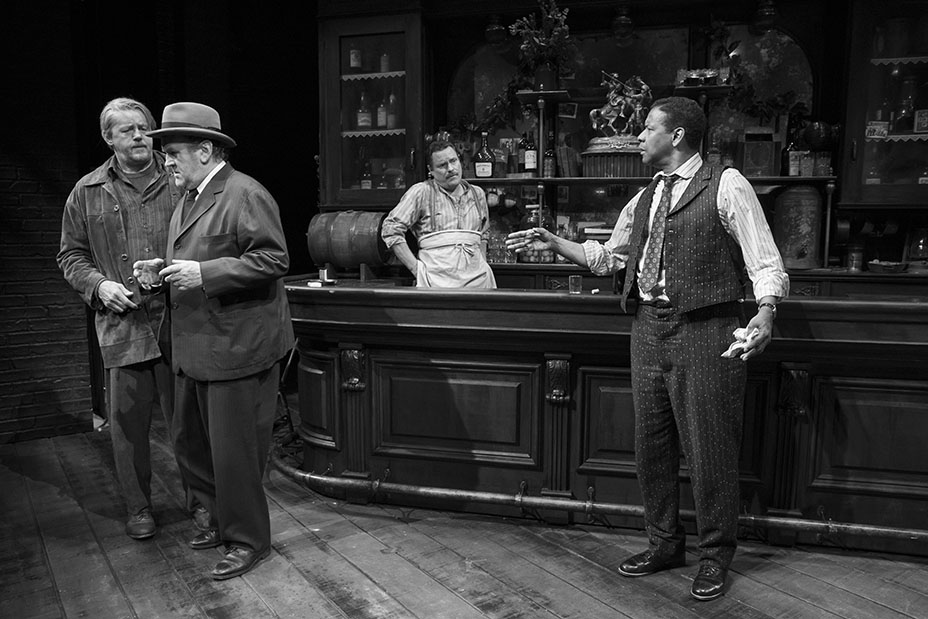 In addition to streamlining the drama by almost an hour, Wolfe’s approach to it is less punishing. The director is more attuned to the sardonic humor masking the desolation, thereby softening the dread. However, any comparison is less about one production being superior to another than whether this is a play that rewards being seen multiple times in close succession. While the violence and betrayal that precede the action are unpacked only in the full-force closing act, Iceman is not a work with fathomless hidden depths to uncover. There’s some contemporary relevance in its political disenchantment, but the drama is pretty much all there on the bruising, nihilistic surface. So revisiting it is less about reinterpretation than about observing the contrasting shadings of different actors.

This production was assembled around Washington’s star casting as Theodore Hickman, the traveling salesman known as Hickey, whose jokes and generosity make the thirsty, mostly skint denizens of Harry’s bar and rooming house anticipate his periodic returns to the Bowery like manna from heaven. Wolfe has an affinity for the showman as a quintessentially American character, and while smug sermonizing is a core part of Hickey’s persona, Washington invests the role with blazing charisma, strutting physicality and evangelical fervor that are very much his own. His entrance, roughly 50 minutes in, brings a welcome jolt of energy that lets you savor what these no-hopers have been craving. Unlike some past takes on the character, Washington is more badgering than menacing, but he makes it work.

Wolfe has cast not only strong actors but also faces that fit the seedy milieu. The bar is shown from different perspectives in each act in the artful shabbiness of Santo Loquasto’s set and the modulations of Jules Fisher and Peggy Eisenhauer’s textured lighting, dimmed to heighten the effect of key monologues. Ann Roth’s period costumes — from dapper to rumpled and threadbare — help delineate the characters.

David Morse brings a burly presence and haunted intensity to the difficult role of Larry Slade, a former syndicalist-anarchist so disillusioned with the failure of the movement that he’d just as soon be dead. Larry’s stubborn humanity keeps him stuck in the bar, observing his fellow boozers with pity, and uncomfortably “philosophizing from the grandstand” rather than participating in life. He serves as the play’s expository guide, doing quick character sketches of the assembly for jumpy young weasel Don Parritt (Austin Butler), whose mother was once attached to Larry both politically and romantically. Don is troubled by a secret no less weighty than Hickey’s. 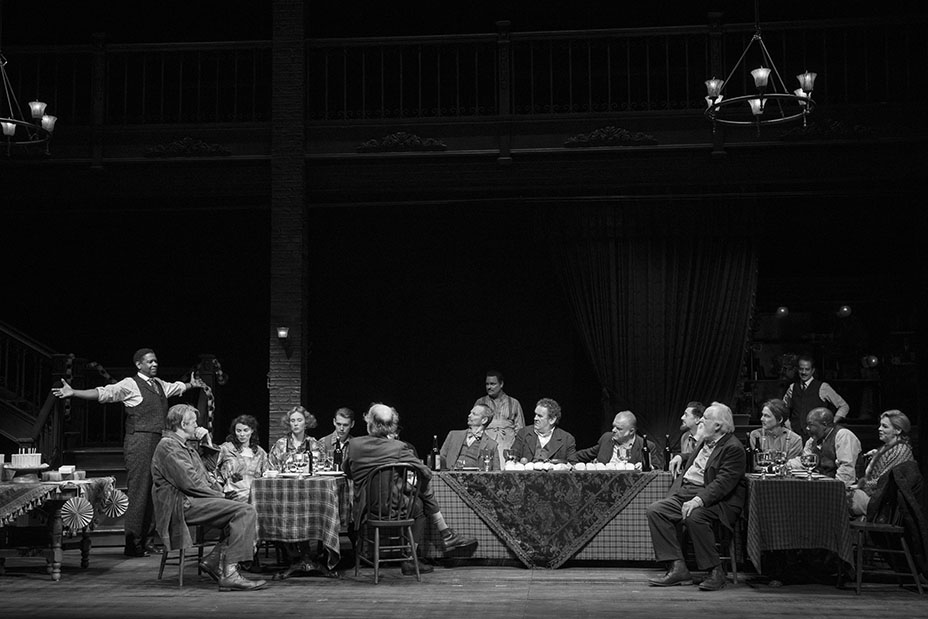 Colm Meaney’s Harry seems to have been born cranky and only gotten more irascible with age, though his sentimental side emerges when he speaks of his supposedly beloved late wife. Despite his grumbling, that softness is even directed occasionally at the moochers who populate his bar, all of them passed out sleeping off the latest bender as the play begins. Harry evasively claims his refusal to venture outside the bar since his wife’s funeral 20 years ago is out of respect for her, but there’s gnawing fear beneath his blustery front.

Among the fixtures are Harry’s brother-in-law Ed Mosher (Bill Irwin), a one-time circus man who uses his clownish tics to hide his shady side (watch him stir from slumber and reflexively reach for his glass, like a muscle memory); and his buddy Pat McGloin (former Bronx firefighter Jack McGee, with a ruddy face right out of Central Casting), an Irish-American ex-cop kicked off the force for corruption.

Then there’s Englishman Cecil Lewis (Frank Wood, doing an unintelligible marble-mouthed mumble) and South African Piet Wetjoen (Dakin Matthews), who fought on opposite sides of the Boer War and now maintain a tetchy camaraderie; the former war correspondent known as “Jimmy Tomorrow” (Reg Rogers, whose Act IV monologue is an affecting highlight), who blames his alcoholism on his wife’s infidelity; Willie Oban (Neal Huff), a once-promising Harvard Law student who would now sell his suit for a drink; Hugo Kalmar (Clark Middleton), erstwhile editor of an anarchist periodical who served 10 years for radical activities; and Joe Mott (Michael Potts, terrific), written as the sole African-American character, who once ran a “Negro gambling house,” and is quick to anger whenever anyone drops a racial epithet.

Wandering down from their third-floor rooms from time to time are resident “ladies of the pavement” Margie (Nina Grollman) and Pearl (Carolyn Braver). They never fail to point out that they are “tarts,” not “whores,” just as bartender Rocky Pioggi (Danny McCarthy) takes his cut but insists he’s no pimp; the key difference, he says, is that while he might slap them, he doesn’t beat them up. Also in the life is mouthy Cora (Tammy Blanchard), planning to marry her sporty lug of a boyfriend, Chuck Morello (Danny Mastrogiorgio), and move to a farm in New Jersey. 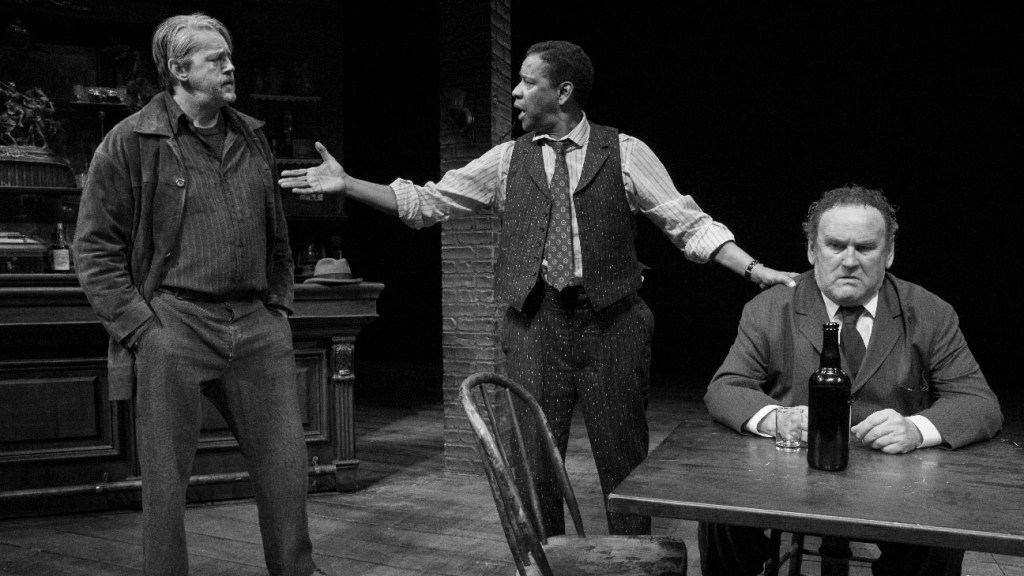 Most of the characters have their pipe dreams of reform or reinvention, many as simple as stepping back into the workforce, or in Harry’s case, taking a stroll around the old ward. They are thrown when Hickey shows up, bringing the party as usual, but also a hectoring conscience, urging them all to relinquish their delusions and embrace the liberating acceptance of their failings. To emphasize his point, he’s on the wagon. In somewhat schematic fashion, O’Neill then has everyone rise to the bait, making half-hearted bids to prove Hickey wrong about their hopelessness, but not getting far before they skulk back in defeat.

Even with some paring down of the text, Wolfe maintains the ambling nature and sleepy rhythms of the play, sparking to life every now and then with scrappy outbursts. Some audiences no doubt will find the sometimes-clunky drama’s inherent lethargy hard work. Others will nestle into the rich language — laced with racist and misogynist slurs that now sting the ears — and vivid characters, graced by O’Neill’s compassion for the smallness of human lives.

Iceman is more of an existential group portrait than a narrative, an examination of denial so seductive that only death can end it, as the symbolic title not so gently suggests. The ultimate galvanizing force is Larry, who sees through Hickey’s sanctimonious savior posturing and demands to know what spurred his supposed new enlightenment.

In response, Washington delivers the salesman’s shattering aria by pulling up a chair downstage and addressing the audience directly. If Hickey’s underlying guilt has been missing from his performance up to that point, it finally flows freely, with real tears. He pours out his truth with a sadness that lays bare his motives, erasing every ounce of fraudulent nobility, every preachy claim he’s been hammering. That leaves him as much an empty shell as everyone else at the “no chance saloon,” conveniently giving them license to return to their cheerful oblivion. All except the burdened young Dan, who can no longer lie to himself, and Larry, now more clear-eyed than ever. In those closing scenes, the play finally achieves its full tragic grandeur.