Ilana Glazer really wants young voters to vote. So much so, after releasing her first stand-up special in January, she was planning on spending the year touring the country where she could bring the fun but also motivate young voters to take to the polls.

“I looked at myself, going all over the country and I’m like, you know, this is an election year. This is the most important election year of my lifetime… This is about democracy versus authoritarianism. I think we should do some voter empowerment work with Generator,” Glazer tells The Hollywood Reporter.

Generator, a nonprofit Glazer co-founded in 2016, aims for everyone to be able to “gather and talk about politics without feeling stupid.” “Our goal is to humanize policy through storytelling by helping organize the noise of these policies into digestible stories and ultimately lower the political barrier of entry,” Generator states on its website.

But when the novel coronavirus pandemic hit, Glazer was forced to switch gears.

“Stand-up is such a miraculous art form. It was so fun. I’m hanging out with a couple thousand people a night to just nothing. It was just such dichotomy,” she tells THR, recalling being left to wonder: “How can I kind of achieve some of the same activation, but in a COVID-safe context?”

As the presidential election neared, she tried to formulate a new approach while still determined to maintain the empowering spirit and purpose of her tour. Glazer joined forces with digital-focused Democratic super PAC PACRONYM for a new web series called Cheat Sheet for the Voting Booth.

The 20-part web series launched in August with new episodes releasing weekly until November. The series, directed by Kristian Mercado and Jake Wilson, features conversations between Glazer and athletes, musicians, activists and artists including Jennifer Lawrence, Kristen Bell, Blake Griffin, Wanda Sykes and more who have connections to key swing states. In the short videos, Glazer and her guest discuss the election, policies and “shine a light on progressive candidates.” To help make things easier, viewers are also able to download a state-based cheat sheet to serve as a reference in knowing who to vote for.

Why a cheat sheet? Because Glazer says politics can be “pretty overwhelming” and the series aims to remind everyone they’re not alone in feeling that way.

“Political shit is unsavory and HARD, so we’re going to give you a cheat sheet,” Glazer writes in the site’s introduction. 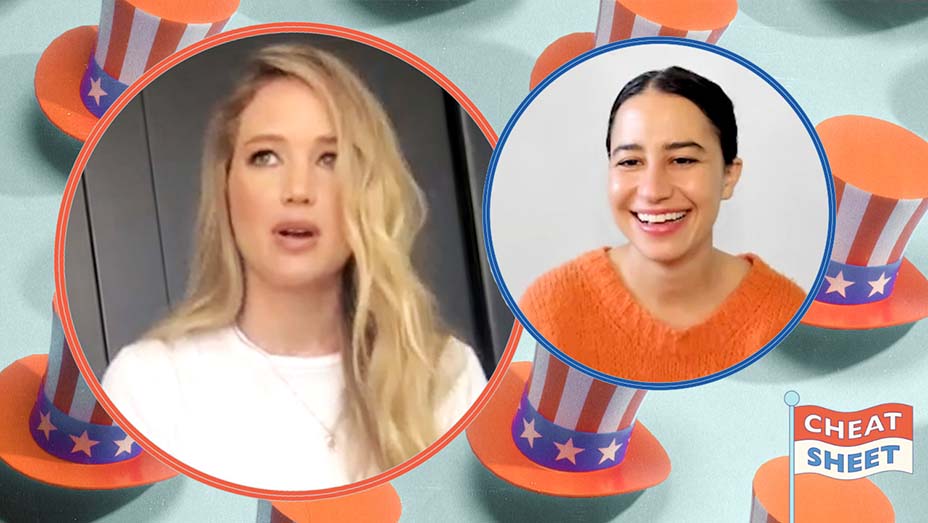 And while a star-studded lineup lends their voice to the conversations, Glazer says don’t assume they aren’t just as awkward and confused with politics as everyone else.

“Every guest texted me a couple of days before [filming the episode] like, ‘I don’t know shit.’ I’m like, ‘dude that’s the point. I want you to come here and admit that you don’t know shit. Don’t act like you know anything because that’s actually what we all need to connect on and reorganize,” she says.

Glazer is proud that her series has created a “vulnerable space” where guest stars aren’t “stepping into a place where they claimed false authority.” “They did not act like Arnold Schwarzenegger smoking a cigar in a hot tub saying, ‘stay inside.’ I’m like, bro, you don’t live in the city. You don’t live in the projects. If I had a bluestone deck with a built-in hot tub then yeah I’d say quarantine,” she jokes.

She also explains that the series is coming at a time when perspectives and outlooks have changed given the trials and tribulations of this year. “Once quarantine hit the whole celebrity thing just turned on its side… The people really connected in quarantine and realize that they are bigger than the systems that claim to serve them.”

Having engaging political conversations while making it a fun, witty experience has become a Glazer signature this election year. Apart from the series, Glazer has also conducted interviews with politicians and activists via her Generator Live series, which she describes as a moment the experts can “give me a Homer Simpson level education of the system.” “That’s where I bite the bullet for the audience and say, ‘I don’t know, can you explain what that means?’ “

The intended audience for her projects is young voters, which makes sense given reports state that the 2016 election had a low voter turnout in the 18-to-29 voting bloc. It’s now questioned whether 2020 will be the year of the young voter with millennials and some members of Gen Z comprising 37 percent of eligible voters. According to a Harvard Youth Poll, approximately 63 percent of Americans age 18-29 say they will “definitely be voting” in the November election.

Glazer is aware that some voters “may not be stoked about Biden” but she still believes young voters should “go hard” for him and Harris because “4 more years of 45 is going to decimate human rights in this country as well as Planet Effing Earth,” she writes. The election, she emphasizes, could serve as “a growing-up moment for Gen Z and millennials.”

“Democracy is something that we cultivate and nurture. With the two options we have, voting for Joe Biden is a safer choice for more people,” she tells THR. “And if a Gen Z or millennial has the privilege to not think about that level of safety, I ask them to look back at what has happened this year with the rise of Black Lives Matter [and] how the movement finally became a multiracial movement… It’s hard to think about where you sit in the system, but you can rise above your reservations and your reluctance and do the right thing for Joe Biden. Voting for Joe Biden and Kamala Harris this year is the right thing.”

Though Glazer has had quite the busy slate ahead of the big day, for actual election day she will be quarantined in Los Angeles. “I’m gonna try to not watch the TV all day,” she says, as she admits she is “afraid to hope too much” after experiencing what she calls “one of the scariest days of my life” with the 2016 election. However, she’s optimistic for a Biden-Harris win.

With passion and commitment to her activism, could an election be in her future? Glazer laughs and says she “could never run” and just really wants to “lift others up and build a platform to share the mic around civic engagement.”

In fact, the work is never done for Glazer as she already has plans post-election with Generator. “Generator has a lot in store — from expanding our programming and content to planning on in-person activation when that enters reality again,” she says. “We are excited to have a body of work to point to now as our political messaging machine and as a platform that shares the mic with activists, artists, and politicians who also want to real talk and #humanizepolicy.”