The Rom Com Fest, a new Los Angeles film festival celebrating the art of the romantic comedy, on Tuesday revealed its inaugural lineup, which will feature classics, new feature-length films and shorts and romance-themed activities.

The festival, which is set to take place predominately at the Downtown Independent from June 20-23, with a few events at other venues, will feature anniversary screenings of Never Been Kissed, followed by a “fireside chat” with Crazy Ex-Girlfriend star Rachel Bloom and festival director Miraya Berke; 10 Things I Hate About You, followed by a Q&A with film writers Kristen “Kiki” Smith and Karen McCullah; and Bride Wars, with a Q&A with writers June Diane Raphael and Casey Wilson.

Among the titles in feature competition is actor Joseph Cross’ directorial debut Summer Night (starring Lana Condor, Analeigh Tipton and Victoria Justice), which will premiere at the fest. Additional features include Anna Lupo’s In Reality, Darien Sills-Evans’ One Bedroom, Jamie Patterson’s Tracks and Laura Madalinski’s Two in the Bush.

The event will additionally feature a live table read of the Rom Com Fest screenplay competition‘s winning script, a live taping of WhoHaha’s Dirty Girl podcast, a MORTIFIED live comedy show and a Dessert Goals pop-up. The festival will also dabble in “experiences,” à la pop-up exhibit “museums” such as the Museum of Ice Cream and 29Rooms; love-letter writing following the 10 Things I Hate About You screening; a pajama party-themed screening of How Stella Got Her Groove Back; and a candle-making craft activity following One Bedroom, among other activities.

“We all need something uplifting to escape to. Routinely dismissed by film critics as a lesser genre artistically, romantic comedies are universally beloved and are a true art form, being some of the most classic and beautiful films that we know today,” Berke said in a statement. “I’m thrilled to be able to bring the Los Angeles community together to experience these films in a new, fun and creative atmosphere.”

Tickets, which are priced between $12 and $15, with a discount for pairs, are on sale as of Tuesday at the fest’s website. See the full lineup below. 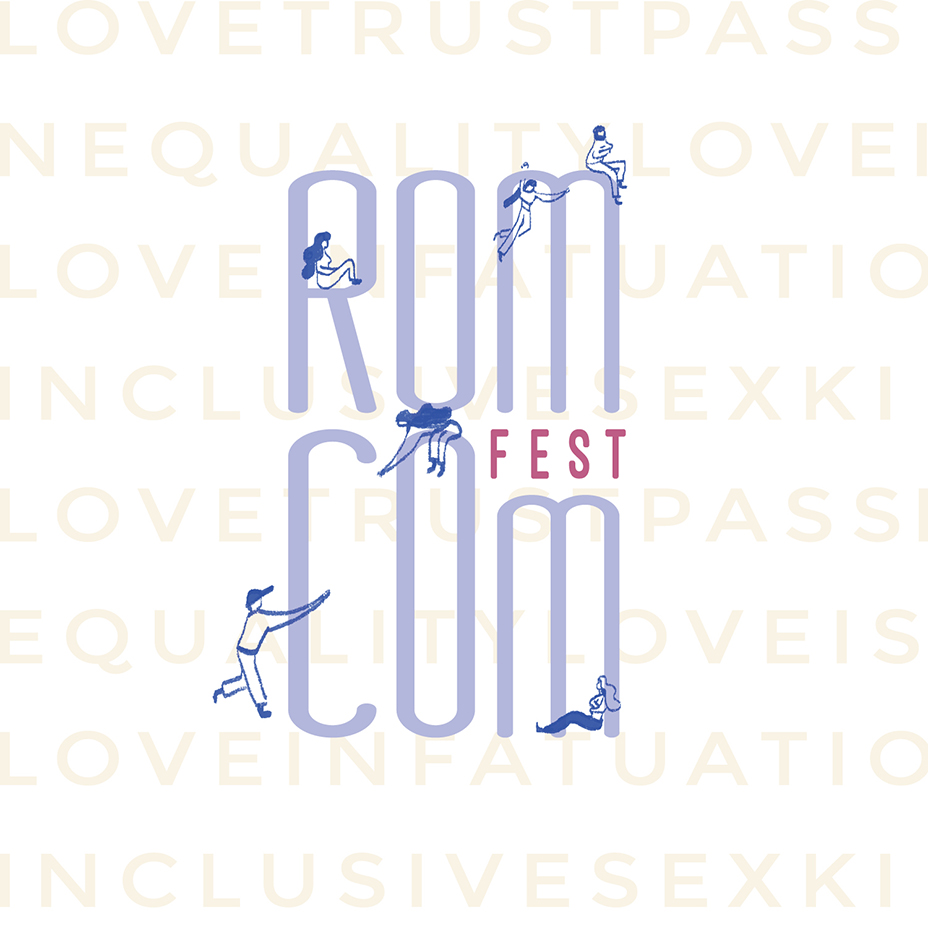 10 THINGS I HATE ABOUT YOU (20TH ANNIVERSARY), directed by Gil Junger / written by Karen McCullah & Kirsten Smith (1999) — A pretty, popular teenager can’t go out on a date until her ill-tempered older sister does. With Heath Ledger, Julia Stiles, Joseph Gordon-Levitt.

Q&A to follow with the film’s writers Kirsten “Kiwi” Smith and Karen McCullah, followed by a “10 Things I Love About You” love-letter writing pop-up craft activity.

Q&A to follow with the film’s writers-actresses June Diane Raphael and Casey Wilson. Bridal party theme — attendees are encouraged to dress in white; those dressed up will receive complimentary ring pops and wedding-themed dessert.

HIS GIRL FRIDAY, written and directed by Howard Hawks (1940) — A newspaper editor uses every trick in the book to keep his ace reporter ex-wife from remarrying. With Cary Grant, Rosalind Russell and Ralph Bellamy.

Complimentary My Mo Mochi Ice Cream will be served before the screening, along with a Rom Com Fest themed compliment card craft. The Los Angeles Women’s Film Collective will discuss the future of romantic comedies following the screening.

HOW STELLA GOT HER GROOVE BACK, directed by Kevin Rodney Sullivan / written by Terry McMillan & Ron Bass (1998) — Stella is a highly successful, forty-something San Francisco stock broker who is persuaded by her colorful New York girlfriend Delilah to take a well deserved, first-class vacation to Jamaica. As she soaks in the beauty of the island, she encounters a strapping, young islander, Winston Shakespeare. His pursuits for her turn into a hot and steamy romance that forces Stella to take personal inventory of her life and try to find a balance between her desire for love and companionship, and the responsibilities of mother and corporate executive. With Angela Bassett, Taye Diggs, Regina King and Whoopi Goldberg.

Pajama-party themed late-night screening — attendees are encouraged to wear their PJs and will receive a complimentary bottle of CBD gummies, courtesy of Not Pot. Screening presented by Not Pot.

NEVER BEEN KISSED (20TH ANNIVERSARY), directed by Raja Gosnell / written by Abby Kohn & Marc Silverstein (1999) — A newspaper reporter enrolls in high school as part of research for a story. With Drew Barrymore and David Arquette.

IN REALITY, written and directed by Ann Lupo (USA) — Despite boasting rich friendships and a creative job, young filmmaker Ann is consumed by the fantasy of finding true love. Just when she thinks she’s found it, she is friend-zoned and the disappointment of rejection shoots her down a deep rabbit hole of unrequited love. Looking for a way to climb out, Ann picks up a camera and sets her sights inward. She confronts multiple characters within her conscious, from a maniacal game show host to a glamorous cabaret performer, that guide her through her investigation of the relationship and her own neuroses. Blending docu-style interview with comedy, drama and hyperbolic fantasies, Ann creates an elaborate, eccentric world that manages to be as intensely relatable as it is one of a kind. With Ann Lupo, Miles G. Jackson and Kimiko Glenn.

ONE BEDROOM, written and directed by Darien Sills-Evans (USA) — Breaking up is easy. Moving out is hard. Especially when there’s a New York City apartment involved. After five years of ups and downs, an African American 30-something couple in a gentrifying neighborhood spend their final afternoon in Brooklyn arguing, reminiscing and then eventually deciding if they’re moving out together or in separate directions. With Darien Sills-Evans, Stephen Hill and Devin Nelson.

Complimentary My Mo Mochi Ice Cream will be served before the screening, along with a Tealight Candle making craft activity, hosted by Makers Mess. Q&A to follow with Darien Sills-Evans, the film’s writer, director, producer and star.

SUMMER NIGHT, directed by Joseph Cross / written by Jordan Jolliff and Joseph Cross (USA) — In a small town, a young, tight-knit group of friends fall in and out of love over the course of one intoxicating, music-filled summer night. With Justin Chatwin, Analeigh Tipton, Victoria Justice, Lana Condor, and Ellar Coltrane. OPENING NIGHT FILM.

Dessert Goals Fest pop up to proceed the screening, along with a travel journal craft hosted by Makers Mess.

TWO IN THE BUSH, directed by Laura Madalinski / written by Kelly Haas and  Laura Madalinski (USA) — After losing her job, Emily arrives home early from work to ?nd her girlfriend in the throes of passion with someone else. In an instant, her entire life is turned upside down. Moving in with her best friend, Emily lands a new gig working for a dominatrix, and promptly falls for her new boss, and her boss’s boyfriend. In this wise and witty look at the world of bisexuality, polyamory, and dungeons, ?lmmaker Laura Madalinski asks us to consider what risks are worth taking for love. With Sarah Mitchell, Travis Delgado and Caitlin Aase.

Short film GIRL FRIEND will play before the feature film.

Complimentary Chameleon Cold Brew Coffee to be served before the screening.

Complimentary My Mochi Ice Cream to be served before the screening, along with craft activities hosted by Makers Mess. Q&A to follow screenings, with select filmmakers in attendance.

A JAMAIS, POUR TOUJOURS, written and directed by Louis St-Pierre (Canada) — Marianne and Maxime are meant for each other. They fit like pieces of a puzzle, understand and love one another, but…

ALMOST CHARMING, written and directed by Taylor Carnes (USA) — Inspired by the Pixar style, Almost Charming is a modern-day fairytale told through pantomime and music. The story follows Beth, a young woman working as a children’s party princess, on her journey to get the attention of her real-life prince charming.

ANXIETY’S WILMA, written and directed by Alexandra Kyle (USA) — A short romantic comedy about a young woman and her anxiety. With Martin Starr and Alexandra Kyle.

GIRL FRIEND, written and directed by Laura Holliday (USA) — A neurotic young woman attempts to be cool and go with the flow when she learns that the guy she is dating doesn’t believe in monogamy.

* Plays before TWO IN THE BUSH

ON SECOND THOUGHT, written and directed by Nora Jobling (USA) — A New York couple looks back on their relationship from the day they met to the day they split. Seeing the same moments from both perspectives, On Second Thought ponders how love can beat the odds when love is 50/50 and hindsight is 20/20.

REKINDLED, directed by Erin Brown Thomas / written by Kelly Vrooman (USA) — After a string of failed relationships, successful career woman Kate gets the chance via a magical Groupon to rekindle romance with the love of her life — her high school boyfriend. But as she soon discovers, the 40% discount is there for a reason…

THE CURSE, written and directed by Dave Berenato (USA) — While at a Halloween party preparing for the online hookup of a lifetime, things get a little weird after Kyle bumps into a witch in the bathroom.

THE NOODLE MAN, directed by Dream Kasestatad / written by Jan Epstein Schwaid (USA) — A struggling actor turned street-food noodle cook lies about his career in an attempt to win over the girl next door.

In partnership with Scriptd, a story platform and script database that connects screenwriters with fans and the industry to find/promote/actualize the next big script, The Rom Com Fest screenplay competition, which received over 70 submissions in 2019, will do a live read of the winning script. Cast to be announced.

In partnership with Elizabeth Banks’ company WhoHaha, a creative community and digital content studio that celebrates and elevates women in comedy, Rom Com Fest will be hosting a special live podcast taping of Dirty Girl. Dirty Girl is feminist, body and sex-positive podcast and tells the stories of funny, brave women who like to get dirty. The one-hour live podcast will feature women sharing stories of their love life that relate to rom-coms.

Sunday, June 23 at 9:30 p.m. at The Ace Hotel Rooftop — the closing night party will be open to badge holders and industry members, as well as the public.

The perfect pair to any rom-com is a sweet treat. A selection of Dessert Goals vendors from New York City and L.A. will be available for sale throughout the festival including: Twisted, Two Chicks In The Mix, Stuffed Cookies, Jessie’s Nutty Cups, Amborella Organics, Cake Bams, Squish Marshmallows & more.

Engage with activities in the theater lobby throughout the weekend before film screenings start. Activities will include love-letter writing, crafts with Makers Mess and more. Connect with a community of other rom-com lovers and pass on the importance of love.