A conservative street artist famous for lampooning liberal Hollywood is celebrating the inauguration of President Donald Trump at an anti-Trump rally Friday in Los Angeles using faux posters of Fox’s revival of the hit TV show 24.

The artist, who goes by the pseudonym Sabo, is also attacking a bunch of musicians scheduled to perform at an anti-Trump rally, also in Los Angeles.

Protesters gathered Friday in and around L.A. City Hall and L.A. Live — an entertainment area near the Staples Center where NBA’s Lakers and NHL’s Kings play — for something called “United Against Hate Inauguration March,” where Sabo posted several fake advertisements for 24: Legacy.

The 13-episode Fox show debuts after the Super Bowl on Feb. 5. 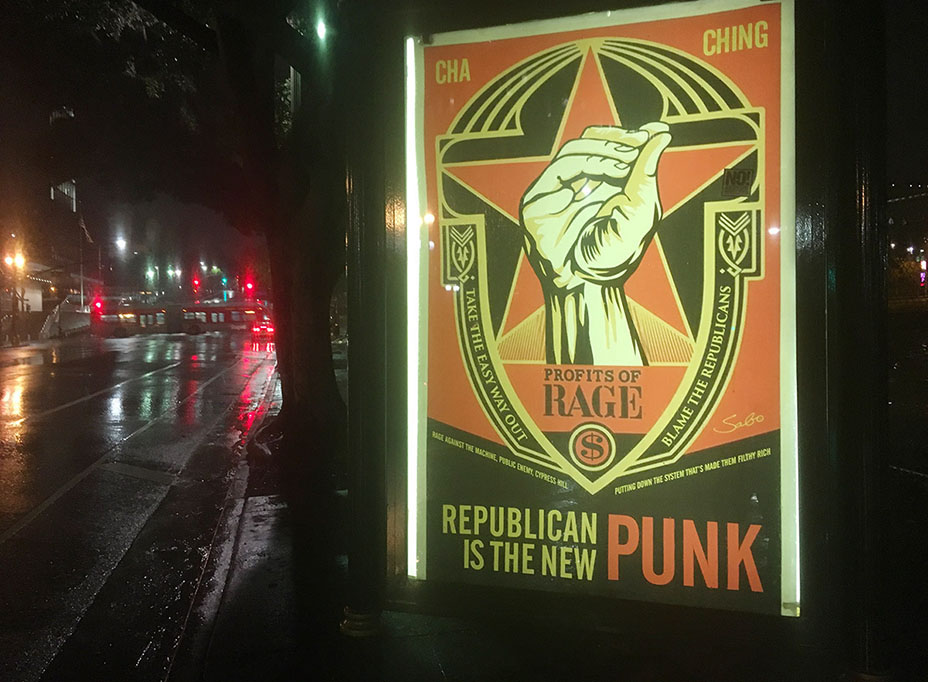 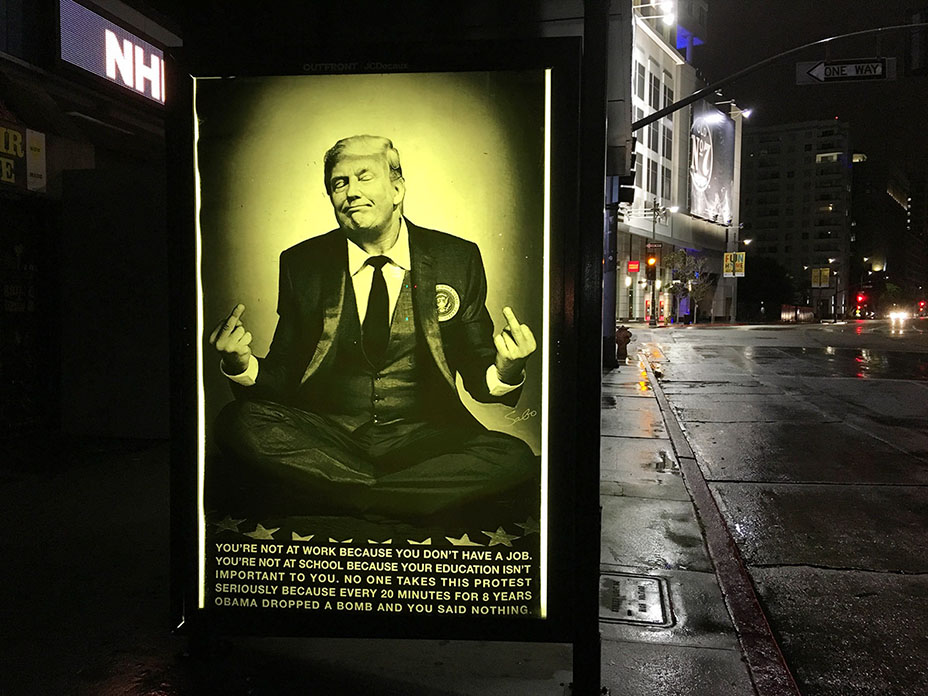 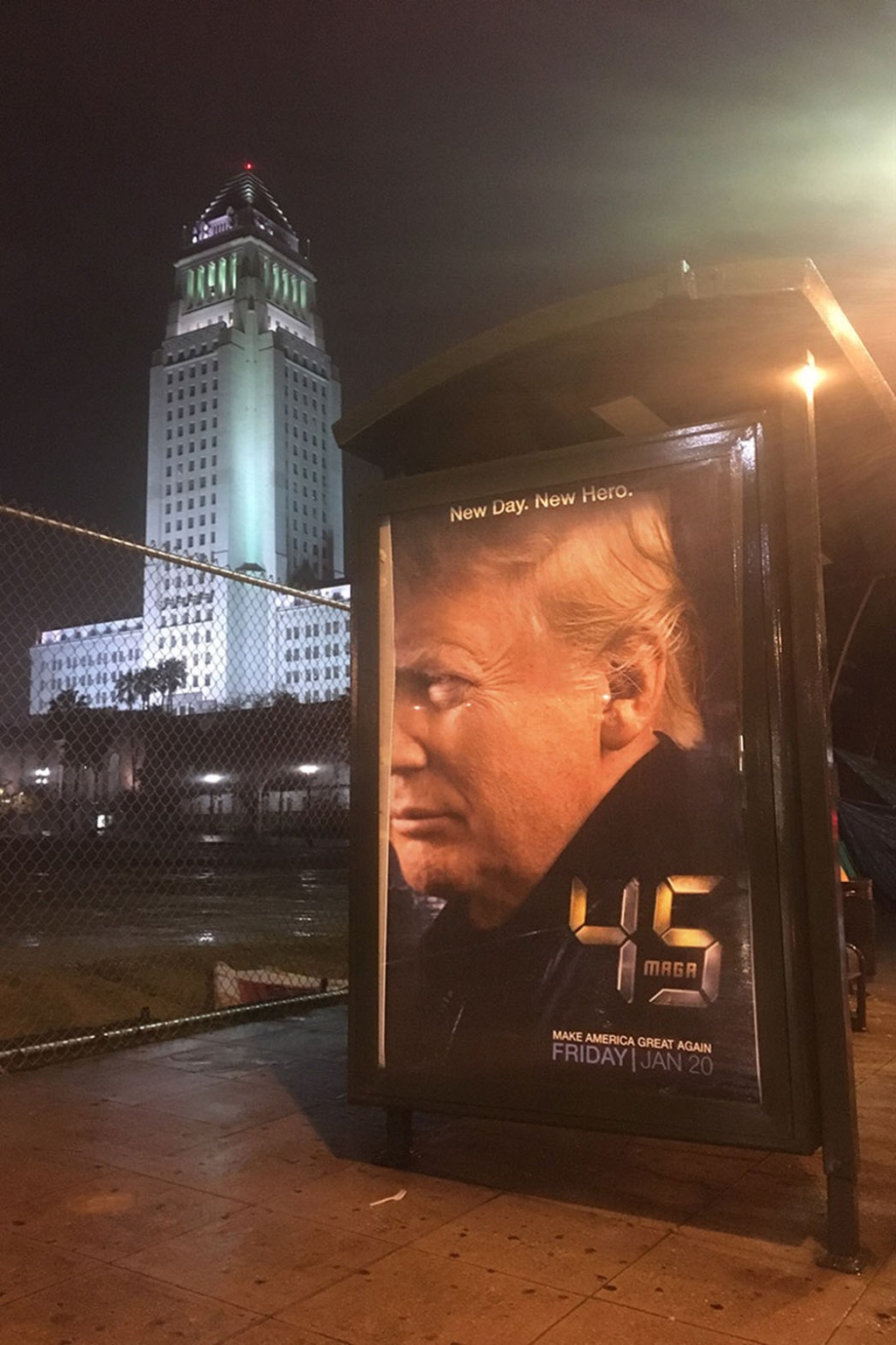 Sabo’s posters appeared Friday on bus stops, buildings and other hard-to-access locations and look remarkably similar to Fox’s official advertisements. Sometimes, he replaced real ads with his fake ones.

As for the concert, it will be held at the Teragram Ballroom in Los Angeles and marks the first performance of Audioslave in 11 years, and it is called the “Anti-Inaugural Ball.”

Tom Morello, formerly of Rage Against the Machine and now with Prophets of Rage, calls the concert a celebration of resistance to racism, sexism, homophobia, bullying, environmental devastation, fascism and Trump. Also performing is Jack Black and the Los Angeles Freedom Choir.

Around the concert venue, Sabo has hung posters deriding the performers as “Profits of Rage.” The text of the posters include “Republican is the New Punk,” “Cha Ching,” and “Take the Easy Way Out – Blame the Republicans.” Other posters feature the image of Trump giving two middle fingers to the artists.

In the past, Sabo has used his street art to attack Leonardo DiCaprio, Cher, Lena Dunham and many other Hollywood celebrities. He sells his right-leaning artwork at his website. 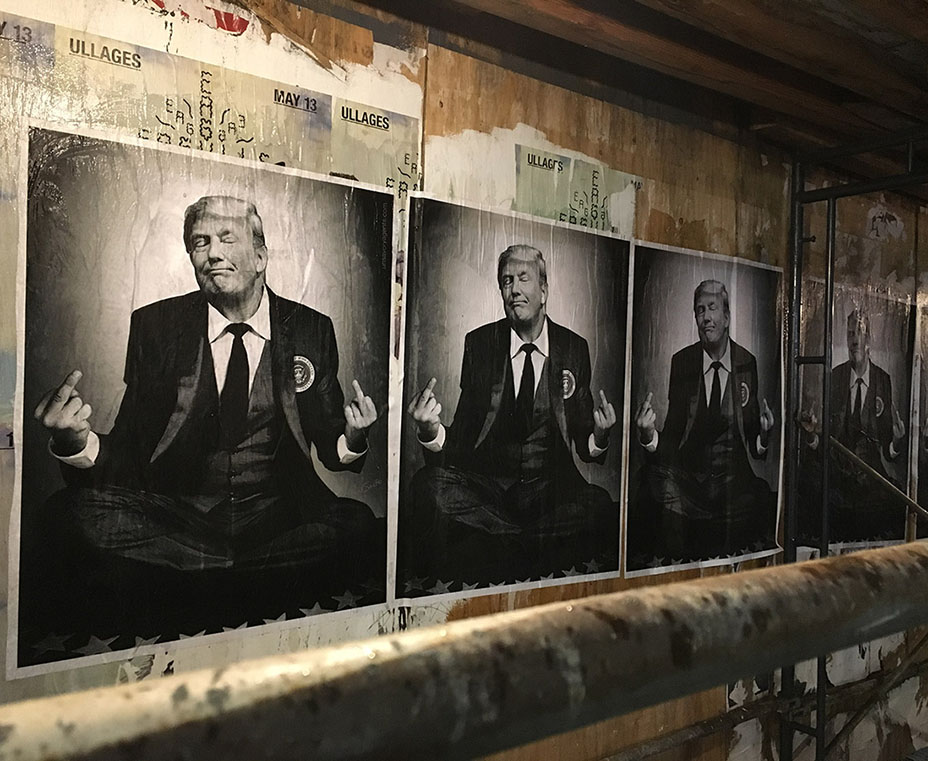 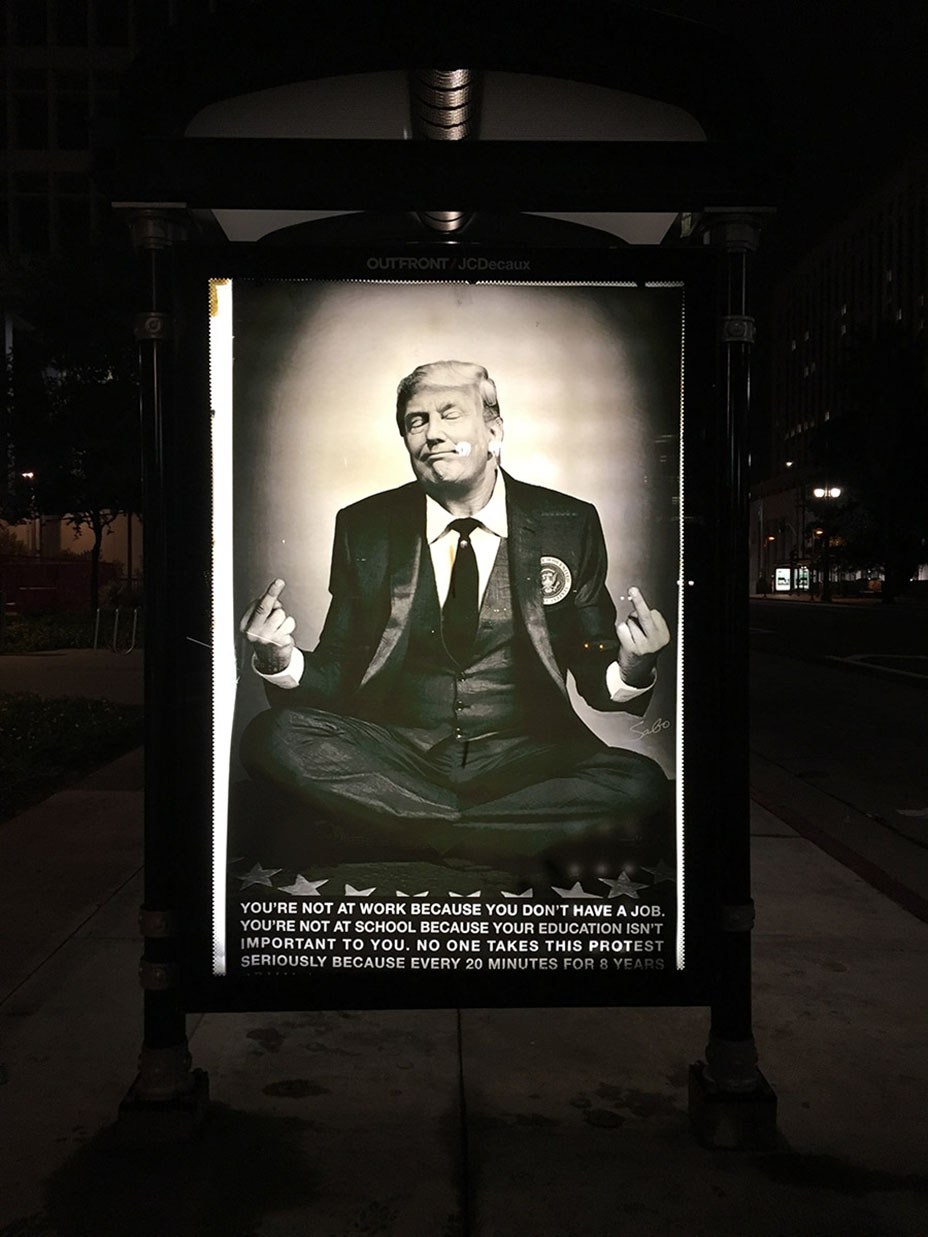 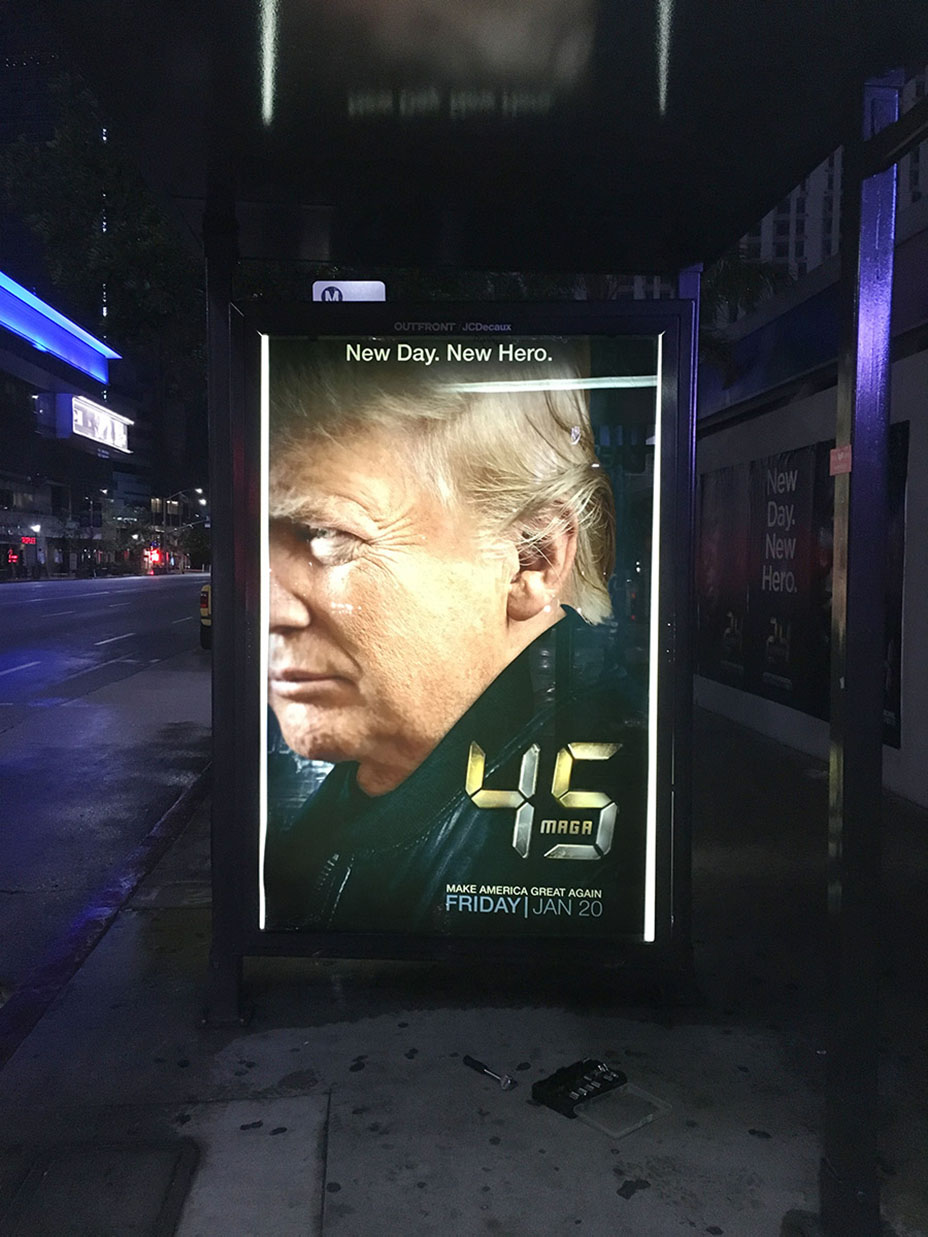 Friday’s assault on Hollywood liberalism is one of Sabo’s most ambitious ever because it includes multiple locations and posters. On a bench, for example, is a piece of art reading “The End of an Error,” referring to President Barack Obama. Later Friday, he also tossed off of a tall building in Los Angeles 2,000 small fliers with the word “losers” on them, aiming them at the anti-Trump protesters below. Some of the “losers” fliers stuck to the top of the umbrellas used by the protesters on a very rainy day in Southern California.

“I am a political artist first, and it’s my duty to keep Trump’s and other politicians’ feet to the fire, something most left-wing artists have forgotten. They are Democrats before they are artists,” Sabo told The Hollywood Reporter.

Sabo spent several hours peppering Los Angeles with his artwork, finishing before the sun rose Friday morning. Many of the posters will likely stay where they are throughout much of inauguration day as authorities (and the targeted entertainers) will find it a time-consuming task to remove them all. Protesters, though, were seen defacing some of Sabo’s easier-to-reach artwork by midday.

“To see so many Hollywood elites lose their minds is a pleasure,” Sabo said. “I no longer see entertainers, I see left-wing soldiers doing their part in indoctrinating those they entertain. Hollywood is dead to a great portion of America these days.” 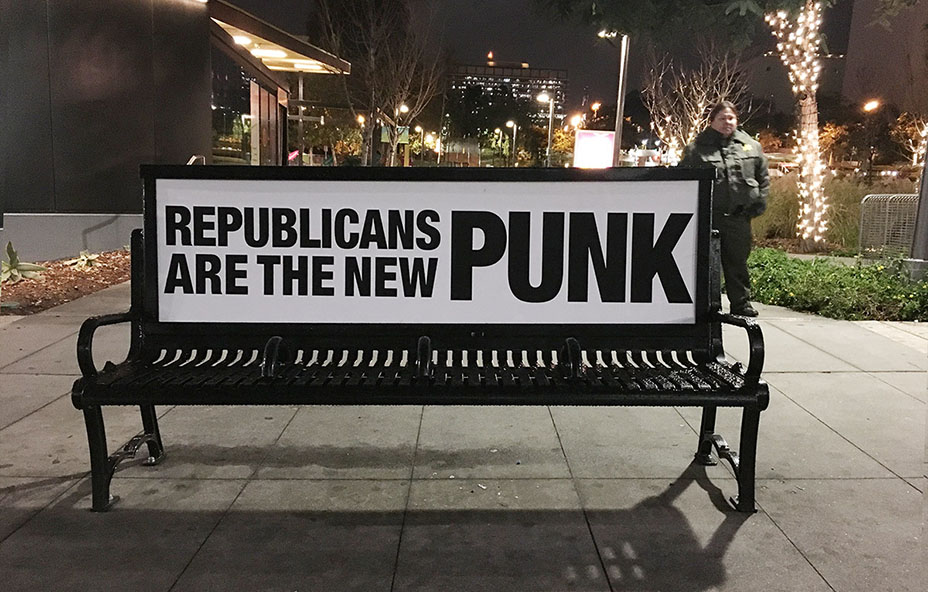 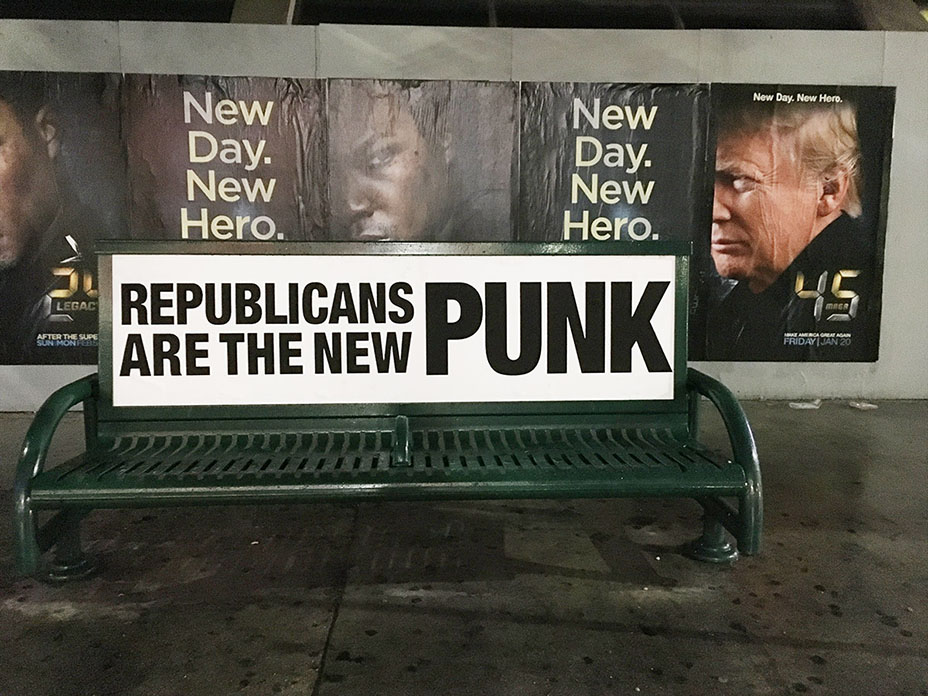 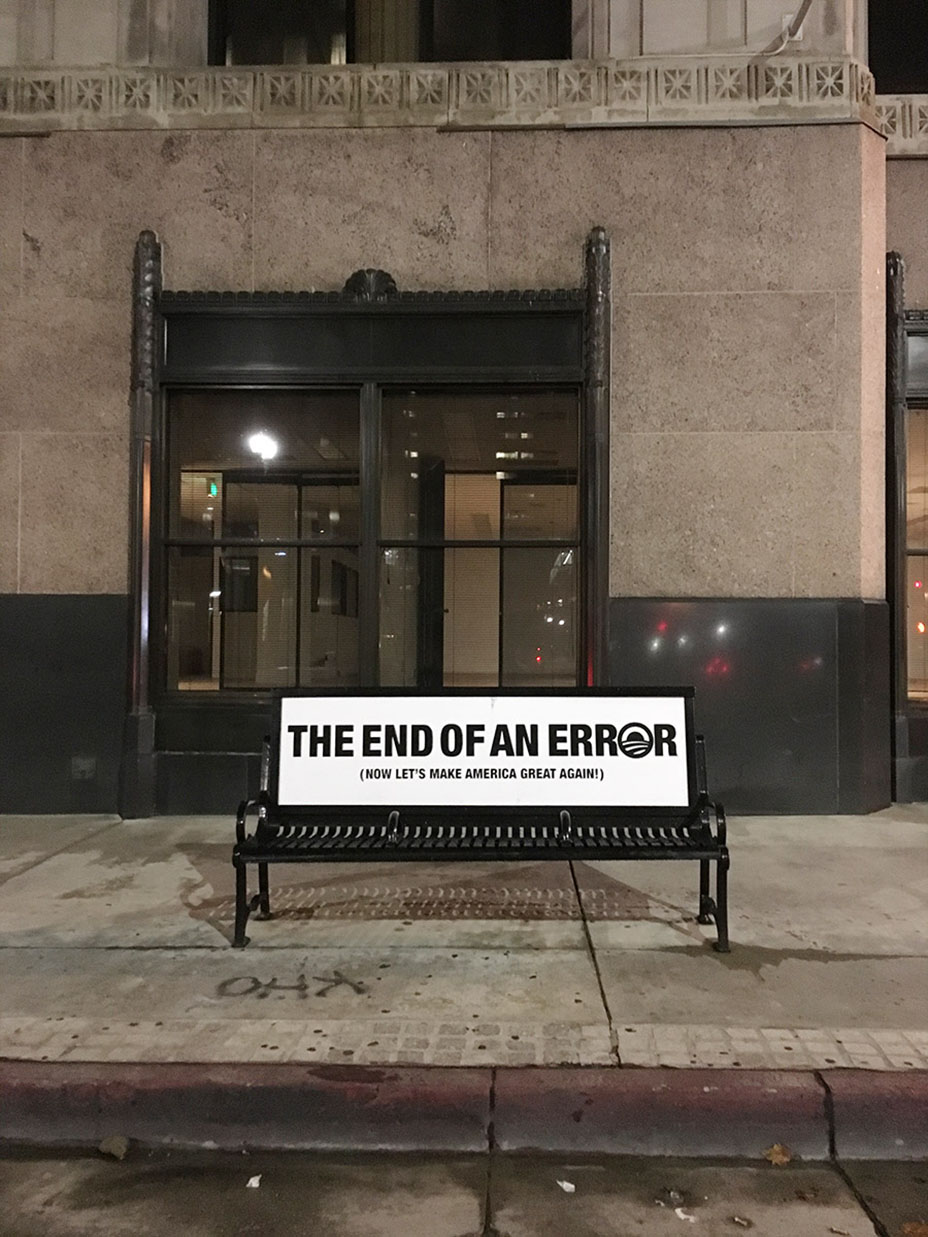