The following review is based on the off-Broadway premiere of Indecent at the Vineyard Theatre, which opened in May 2016 and transfers to Broadway with its full cast and creative team intact.

The intriguing backstory of a groundbreaking but largely forgotten Broadway show of the 1920s is the subject of Indecent. The new drama with music by Pulitzer winner Paula Vogel (How I Learned to Drive) focuses on Yiddish playwright Sholem Asch’s God of Vengeance, which was shut down by police on obscenity charges after a single performance in 1923. Co-created by Vogel with director Rebecca Taichman, Indecent is a gripping if more than a little pretentious theatrical history lesson. The production received its New York City premiere at off-Broadway’s Vineyard Theatre after previous engagements at La Jolla Playhouse and Yale Repertory Theatre, and has since moved to Broadway.

'KPOP' to Close in December Two Weeks After Opening on Broadway

A Brechtian air infuses this work performed by seven actors (all but one playing multiple roles) and three onstage musicians playing mostly original, klezmer-style music. A narrator, Lemml (Richard Topol) — the stage manager of Asch’s play and the most richly drawn character of Vogel’s, allowing Topol to give the production’s standout performance — guides us through the episodic proceedings, often accompanied by supertitles to set the action and provide translations. After a short prologue in which he introduces the company, the story begins in 1906 Warsaw, where 23-year-old Asch is nervously waiting for his wife’s reaction to his first play. She tells him she loves it, and prophetically announces that it will be performed all over the world.

And so it was, as the drama, about the daughter of a brothel owner falling in love with one of her father’s prostitutes, became a sensation throughout Europe and Russia. And it was a sensation in more ways than one, as its controversial subject matter, including the lesbian relationship and the onstage desecration of a Torah, shocked audiences. 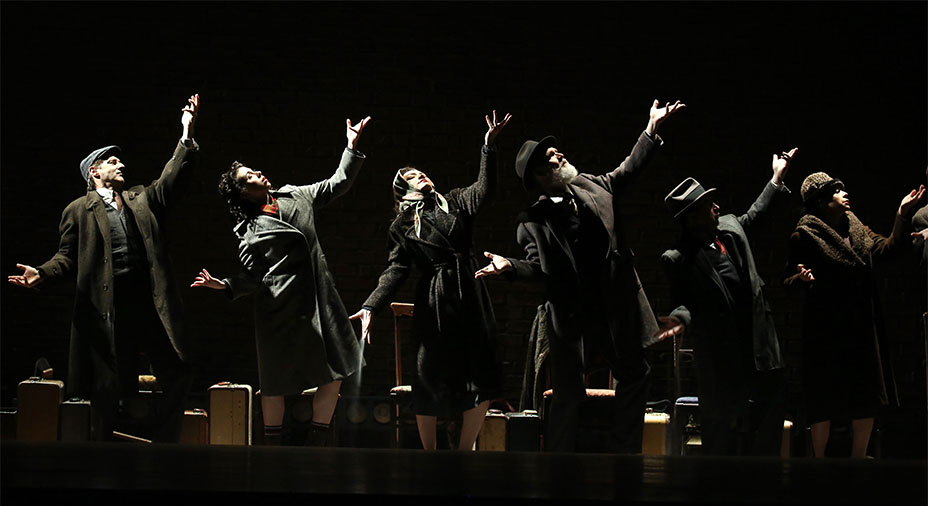 Eventually, both God of Vengeance and its celebrated author made their way to America, with the play first receiving a Yiddish-language production in the Bowery and then an English-language version at Greenwich Village’s celebrated Provincetown Playhouse, home to Eugene O’Neill’s early works. (O’Neill briefly shows up here in one of the play’s more pungent scenes.)

The latter production was sufficiently successful for the play to be transferred to Broadway, and that was where the trouble really began. The producer made unauthorized changes to pander to the tastes of uptown audiences. After its initial performance, he and the entire cast were arrested on charges of obscenity, with Asch refusing to get involved. They were put on trial and convicted, with the verdict eventually overturned. The play is later seen being secretly performed in an attic in the Lodz Ghetto in 1943, its starving actors literally begging the audience to throw food at them.

It’s a fascinating theatrical tale, but Indecent doesn’t have the impact it should due to the diffuse manner in which the story is presented. The co-creators attempt to cover so much ground — including the depiction of a romantic relationship between the two lead actresses that mirrors the one in the play — that the focus inevitably gets lost. The many weighty themes being explored are often related via narration rather than effectively dramatized. The characters — when we’re able to keep track of them, that is — are underdeveloped, and there’s too heavy a reliance on the music (composed by Lisa Gutkin and Aaron Halva) and choreography (by David Dorfman) to establish the properly Semitic mood.

But for all its stylistic excesses, Indecent exerts an undeniable power, certainly more so than the scenes from Asch’s work, which today seem hopelessly melodramatic. It’s telling that the evening’s most moving moment comes toward the end, when the performers hauntingly use dust to convey the horrors of the Holocaust. It’s followed by one of the most famous scenes in God of Vengeance, in which the female leads tenderly express their love for each other while standing in pouring rain. But what should have been a powerful ending here feels unfortunately anticlimactic.