Rupert Goold is the king of bells and whistles. The English showman rarely resists the urge to infuse a text with kinetic energy by drawing from his ample bag of dynamic stage tricks. That can work to a production’s advantage — his Macbeth with Patrick Stewart amped up the bone-chilling shivers by dipping into a wide spectrum of horror-movie tropes; his theatricalization of regal pomp was just the ticket for King Charles III; and as for his work on the American Psycho musical, well, what invites flashy excess more than a Bret Easton Ellis satire of 1980s rapaciousness?

Elsewhere, though, the gilded Goold touch can expose the shortcomings of a mediocre play. That was the case with Lucy Prebble’s Enron, as it is again with James Graham’s Ink.

Both those productions were hits in London, perhaps in part because Brit audiences get such a frisson of pleasure from tut-tutting in disapproval at the evils of unchecked capitalism and the sacrifice of rectitude in favor of profit, particularly when an outsider is the villain. Graham’s play has more going for it than the exhaustingly simplistic “spectaclecture” of Enron. But it’s basically a semi-dramatized Wikipedia page with two satisfyingly fleshed-out characters in a crowded field, and two correspondingly compelling performances competing for attention with a load of directorial froufrou. That includes a slinky club chanteuse, a dance number, jaunty onstage music-hall piano accompaniment and a raucous low-comedy interlude right out of The Benny Hill Show.

Which is not to say Graham doesn’t hit some accurate marks in his retelling of Rupert Murdoch’s vanquishing of starchy Fleet Street in 1969, nurturing renegade editor Larry Lamb after purchasing The Sun, to make over the failing national broadsheet as a trashy tabloid catering to the masses. 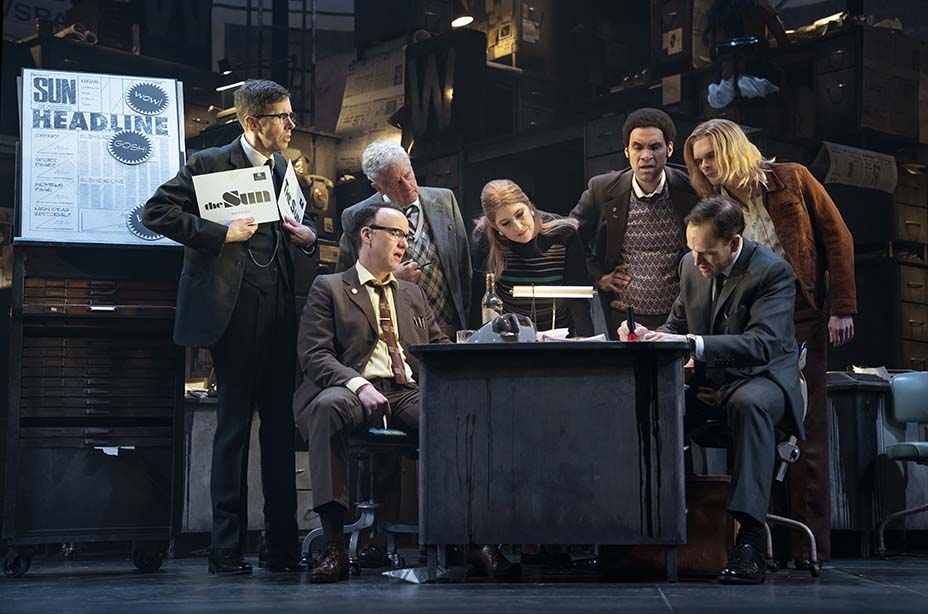 Hugh Cudlipp (Michael Siberry), editor of market leader the Daily Mirror and a representative of the stuffily self-important old guard, cautions Lamb (Jonny Lee Miller): “Pander to and promote the most base instincts of people all you like, fine, create an appetite, but I warn you. You’ll have to keep feeding it.” The slippery slope of dumbed-down, sensationalized news is a subject ripe for exploration, and the brash, youngish Murdoch (Bertie Carvel) — back when Fox News was no more than a glimmer in his eye, let alone an influential political megaphone — is a viable target.

While Graham capably shows how The Sun began pushing a xenophobic agenda, its volume destined to grow exponentially as the Murdoch empire expanded, he doesn’t exactly tread softly in tracing a populist line back to the Nazis. But then perhaps recent history — from the phone-hacking scandal at Murdoch’s now-defunct News of the World to the rightward tilt of the political landscape on both sides of the Atlantic — doesn’t call for subtlety. The play may be chronicling events from half a century ago, but Ink has undeniable currency in the era of Brexit and Trump.

For anyone with a nostalgic interest in the bygone days of print journalism, there’s lots to enjoy in Goold’s imaginative presentation of the nuts-and-bolts process of putting out a daily paper. Designer Bunny Christie’s unit set — a mountainous tangle of editorial desks, chairs and file drawers, enhanced by Jon Driscoll’s projections overhead — even opens up like a gate to Hell, with Neil Austin’s lighting giving off fiery heat as the metal plates are cast in the foundry. Everything from editorial content to headline-writing to layout and even distribution is depicted with rollicking energy and humor. 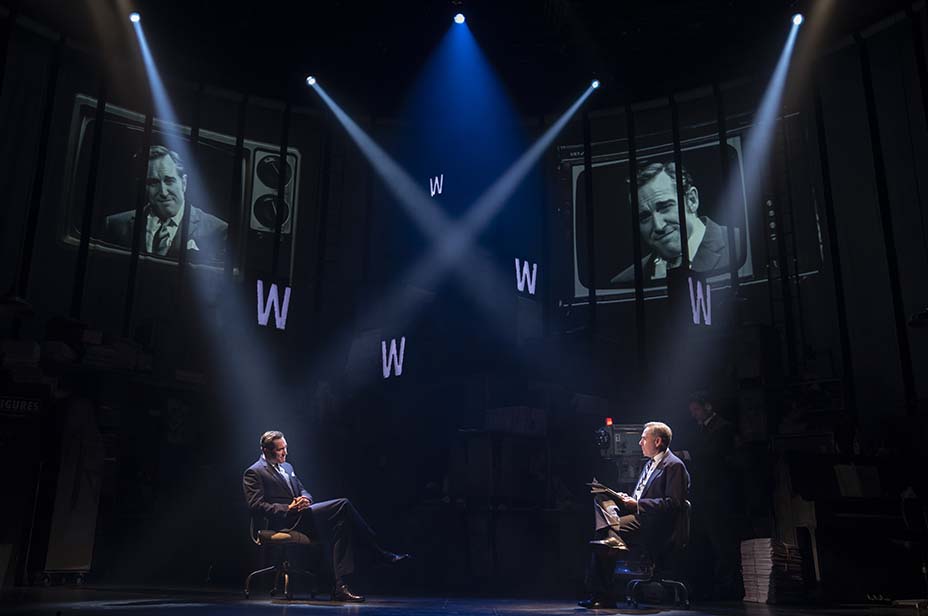 When Murdoch first approaches him about stewarding his newly acquired asset, Lamb has been toiling thanklessly as a regional editor in Manchester after spending a decade in London waiting in vain to be promoted from the Mirror copy desk. The devilish Carvel (last seen on Broadway as Miss Trunchbull in Matilda) plays Murdoch as a Mephistophelean seducer with a touch of the Mobster. He leans in with a conspiratorial smile or sits back with the smug self-assurance of a man accustomed to getting what he wants, savoring the profanities with which he sprinkles his conversation like truffles. Having done his research on Larry, Murdoch knows that the son of a Yorkshire blacksmith is just as unwelcome as the Australian interloper among the Oxbridge-educated old boys of Fleet Street. So he sells the job as a revenge pact.

However, even if he’s the puppet master, Murdoch remains behind-the-scenes for much of the action. That leaves Miller’s driven, increasingly ruthless Lamb as the play’s focus, and although the actor deftly suggests the corrosive cost of Larry’s Faustian bargain, the character is no substitute for his darkly charismatic overlord.

Encouraged to go for broke (“I just want something… loud,” Murdoch tells him) and create an entirely new product that the British people don’t yet even know they crave, Larry takes the boss at his word. He poaches staffers in a repetitive round of hires — each one turns him down flat before succumbing to a deal too good to pass up — that the director gooses by turning it into a giddy musical sequence, the stage equivalent of a cinematic montage.

Graham and Goold build genuine excitement into the first edition of the relaunched paper, pulled together on an almost impossibly tight deadline. While Cudlipp, who sold Murdoch the paper as the dead weight of the Mirror‘s holding company, salivates over the prospect of its certain failure, The Sun‘s steady circulation increase puts him on instant alert. 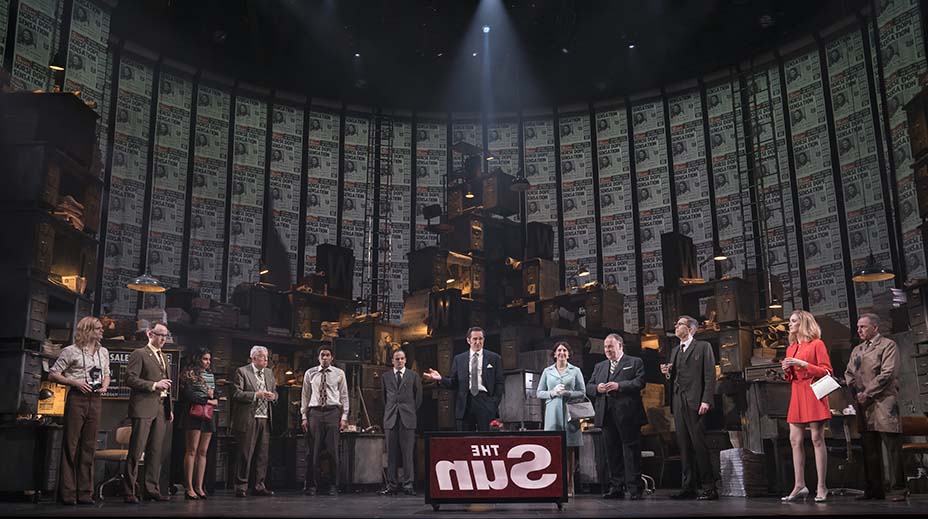 There’s entertainment value in the glee with which Larry and his team rip into the noble traditions of establishment print journalism with innovations like TV coverage (the enemy!), horoscopes, giveaway promotions, wacky human-interest stories, celebrity gossip and scantily clad models.

Goold stages it all with a putting-on-a-show adrenaline rush, even if it’s somewhat undercut by lack of character shading in the newsroom figures. Robert Stanton as fussbudget deputy editor Bernard Shrimsley, Tara Summers as canny women’s editor Joyce Hopkirk and Bill Buell as crusty sports editor Frank Nicklin all have amusing moments, but The Front Page this is not. The goal of hurdling the Mirror‘s circulation lead in a year provides the drama with a ticking clock. But the overlong play spends too much time spinning its wheels. This isn’t helped by the prolonged absences of Carvel’s Murdoch, though there is a sharp scene with him being interviewed on TV, shrugging off the supercilious host’s disdain while defending his core philosophy: “The numbers are what matter.”

The juicy element that finally livens up the sluggish second act is a shocking development likely to be unfamiliar to most American audiences. It also strikes at the dramatic crux of the matter — how uncomfortable ethical questions were brushed aside for the sake of sales figures.

Even Murdoch shows an uncharacteristically squeamish side when Larry begins running exclusive front-page stories on the abduction of Muriel McKay (Summers), wife of Murdoch’s deputy Alick McKay (Colin McPhillamy). That the kidnappers had mistaken Muriel for Murdoch’s wife Anna (Erin Neufer) only makes the situation stickier, and the horrific outcome resonates all the more because of the Sun‘s role in the woman’s fate. 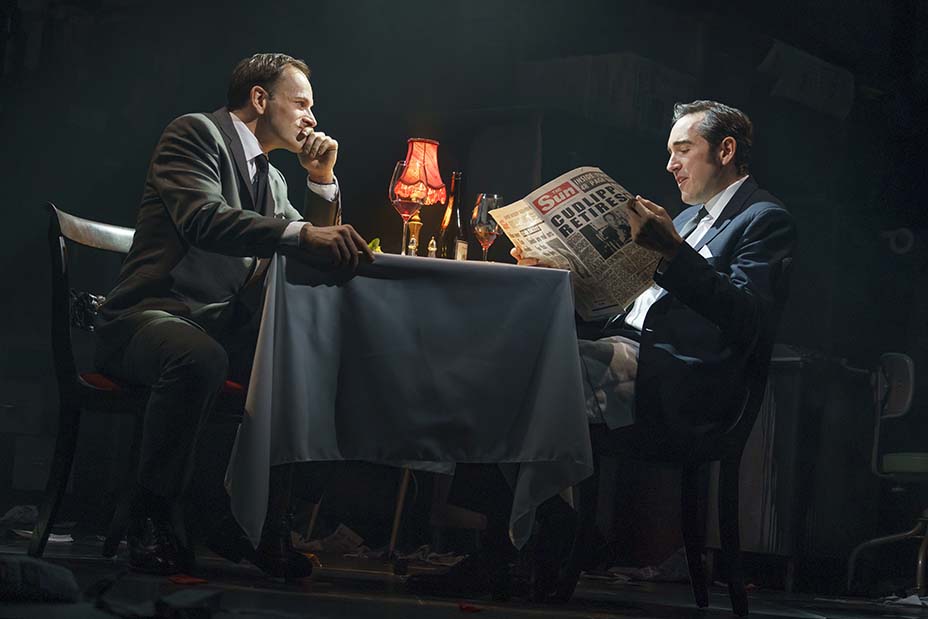 But this is also where the structural imbalance in Graham’s writing becomes problematic. Although he’s following historical chronology, going from such a chilling crime to a drawn-out scene agonizing over the decision to introduce topless “Page 3 girls” just seems anticlimactic. Or maybe the disproportionate attention is part of the point?

This is also one of the few times over two hours and 40 minutes when Goold slows down enough to let a scene breathe, first in the protracted negotiation between Larry and the first-anniversary “birthday suit” model, Stephanie Rahn (Rana Roy), and then in the aftermath of her appearance in print. Any illusions about class and taste being part of the business model have long since been torched, so placing so much dramatic weight on this chapter just trivializes the legitimate tragedy that preceded it.

As for the continuing degradation of media standards to come in Murdoch’s future, a mention in the closing scene that he has his eye on an American TV network just brings a shrug of numbed acceptance, given how thoroughly any dramatic tension has dissipated by the time the play wraps up. “It’s a good story,” Rupert tells Larry in an undercooked thematic motif. “People like stories.” That may be true, but Graham’s storytelling instincts too often get dulled here, and Goold’s frantically busy direction can’t disguise that.