When Jay Ellis got the itch to direct, he did not go the route of so many actors before him and simply ask. He wanted to be prepared. So the Insecure star first shadowed his own director and producer, Melina Matsoukas, back in 2017, then visited the sets of Silicon Valley, Black Monday and Brooklyn Nine-Nine. He also took filmmaking classes.

Ellis’ lengthy prep was put to the test for the seventh episode of season four of Insecure, “Lowkey Trippin’,” which followed Yvonne Orji’s Molly on vacation with her new boyfriend (Alexander Hodge) and required Ellis to film on a zip line and location scout in Mexico during brief breaks from acting in Los Angeles on the HBO comedy. The day after Insecure’s season four finale aired, Ellis and Matsoukas got on the phone to talk about his episode, the biggest surprise of his actor-to-director transition and getting more Black artists behind the camera.

JAY ELLIS Melina, do you remember me asking you about [shadowing you]? You said I had to check with [Insecure showrunner] Prentice [Penny] first, because somebody was already shadowing that episode. The other person was Kerry Washington, so I thought maybe I should wait.

MELINA MATSOUKAS Honestly, in that finale, we were so overwhelmed I didn’t realize you all were there. The more, the merrier!

ELLIS That finale was huge. You let me scout locations with you, and we drove all around the city. I remember being in complete awe. No matter where we were, you’d say, “Well, I can put this here … I can put that there … Nah, this isn’t going to work. What else do we have?” You were so quick to see if the space could work for what you envisioned — and so confident when you knew the space wasn’t for you. I wanted to figure that out. How do you do that?

MATSOUKAS It’s learned. I believe strongly in education — teaching and always continuing to learn. I decided to get into filmmaking when I was in college. Obviously, it’s a lot easier to visualize and communicate when you have that experience and training. But I think what’s so special about filmmaking is that there are so many different paths to the same effort. That was my path, but it’s not necessarily everyone’s. At what point in your career did you say, “Wow, I want to get behind the camera?”

ELLIS My last season of The Game [in 2015]. Before my very last episode of the season, I asked our DP if I could camera operate. (Both laugh.) He looked at me like I was crazy and told me to go ask the showrunner …

MATSOUKAS … Who’s just going to walk on set and see an actor behind the camera. (Laughs.) You have to have courage to put yourself out there!

ELLIS I feel like I’m dumb enough to believe I could do it — you know? So I asked Mara [Brock Akil, creator of The Game] and, shoutout to her, she let me do it. I got to camera operate, and the next time I thought about directing was when we shot the pilot for Insecure — watching you create that whole world, that visual style with that tiny, tiny department that had that office in Manhattan Beach just filled with pictures.

MATSOUKAS The main part of being a director is learning how to communicate that vision. For me, so much of it comes from pictures and stories. It’s hard. No one is in each other’s brains. You need something tangible to translate and then elevate by allowing other artists to come in.

ELLIS Seeing your space made that click for me. Like, “Oh, this is how I can take what’s in my head, make it happen and actually create.”

MATSOUKAS And I’m glad you brought up Mara. She has been someone whose work I have looked to throughout my career. Whether I knew her personally or not, she was training me in many ways. It’s funny how many people on Insecure were organically affected by her — to diversify our landscape and have our stories told by us, which is kind of our mantra on set. We always use Insecure to give young filmmakers opportunities. Even myself, I had never done a TV show before. If it wasn’t for Issa [Rae] and Prentice taking that risk, believing I could do more than music videos and commercials, I wouldn’t be here. Anyway, you didn’t direct the season finale — but you basically did, because it was the last episode we filmed in season four. Everybody was so exhausted. 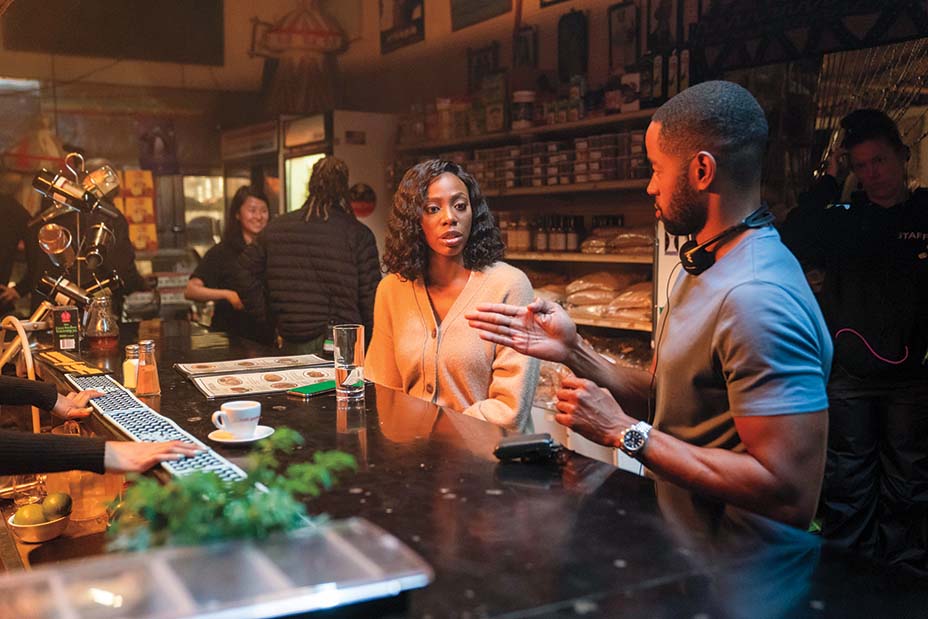 ELLIS And they were all so excited to go shoot in Mexico, like it’s a vacation. This is work! I was prepping while we were still shooting. I remember I wrapped at 6 a.m. on Saturday, went straight to the airport, flew down to Puerto Vallarta, scouted the entire day, passed out, scouted again on Sunday afternoon, got on a plane, and was back on set to act at 6 a.m. on Monday. I was looking at you like, “I just didn’t realize it was this hard!”

MATSOUKAS Y’all think you can just step behind the camera and it’s no work! (Laughs.)

ELLIS Fortunately, the crew was really behind me. I’m super grateful for that. We’re a family, and it’s been a lot of the same faces from season one. I think they really wanted to see me succeed.

MATSOUKAS So your first directing job was in a different country. What was the biggest obstacle there?

ELLIS We spent so much time going back and forth on the engineering of the zip line shot, even though it was maybe 15 seconds’ worth of screen time. We thought we’d have another camera operator in front of Yvonne — but then we found out the line can only hold one person at a time. We thought we’d set the camera in front of her — but the wind kept moving the camera. On top of that, Yvonne had never been on a zip line before. I think she was all for it until she got there, saw it and said, “How many times do I have to do this?” I was like, “How about just three times? Two times?” 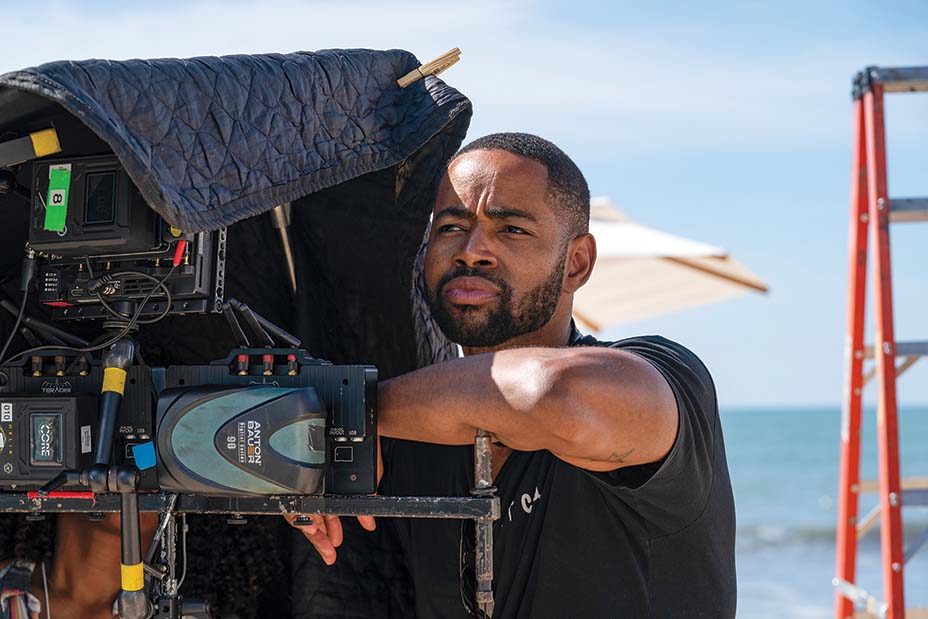 ELLIS When you see her land in the episode, it’s actually the first take. You see her actually riding a zip line for the first time.

MATSOUKAS What’s one benefit and one challenge to being an actor getting into the director’s chair?

ELLIS Words are basically my job. That’s what I use all day long. So communication is something that is insanely important — whether that’s receiving it from a director, perceiving words on a page or working with a scene partner. So I felt very comfortable being able to talk to Yvonne, Alexander [Hodge] and the other actors about what we were trying to get from them in different scenes. But a challenge? As an actor, being on the other side of the camera, it always feels like everything is a little slower. But for a director, it’s the clock! Everything moves so much faster. As an actor, I’m thinking, “What is taking so long?” All of a sudden, I’m like, “OK, I need another hour!” 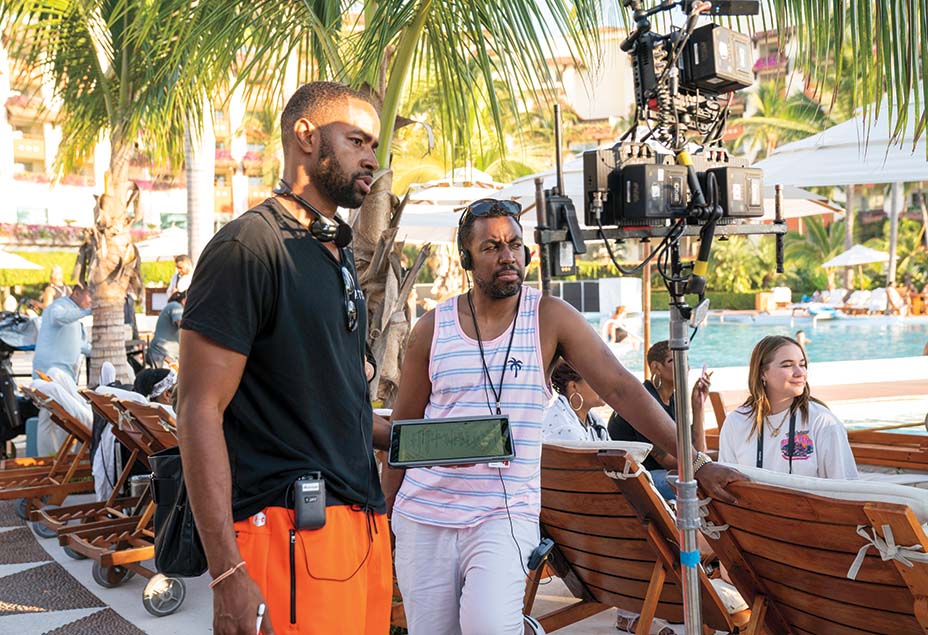 MATSOUKAS Time works differently on different sides of the camera, that’s so true. So what’s next for you as a director?

ELLIS One thing I realized that I would like to do is focus solely on directing while I’m doing it — and not also having to act. I want to do a feature at some point, but I’ll take my time. No rush. I’m like you, a big believer in education. From season two through the end of season three, I was actually in UCLA the entire time taking a directing course.

MATSOUKAS I didn’t know that!

ELLIS Yeah, all season three. I was taking classes on Monday nights from 7 to 10 o’clock. I’d wrap on set, stop somewhere to grab food and drive straight to UCLA — which was crazy. But I appreciate the journey.

MATSOUKAS I think once you’re able to prove that you can tell a story onscreen, people are more open to hiring you. You obviously directed a really successful episode, so now you have a calling card.

ELLIS If you guys are willing to give me an episode next season, I would really like to just be able to direct and not worry about the performance piece of it.

MATSOUKAS I’m not going to say we’ll hire you next season, but it’s looking good if that’s what you want. (Laughs.) I think it gets a lot easier. There’s a need for change and diversity within our industry, so now is the time for Black creators to tell their stories and be working. We already do that, but we are forcing other people to find those Black voices and give them these opportunities that we have been shut out from. Our industry has to change, and we’re going to be at the forefront of that. I feel like you’re going to be working, and we’ll support you in whatever you need to make sure that you succeed. 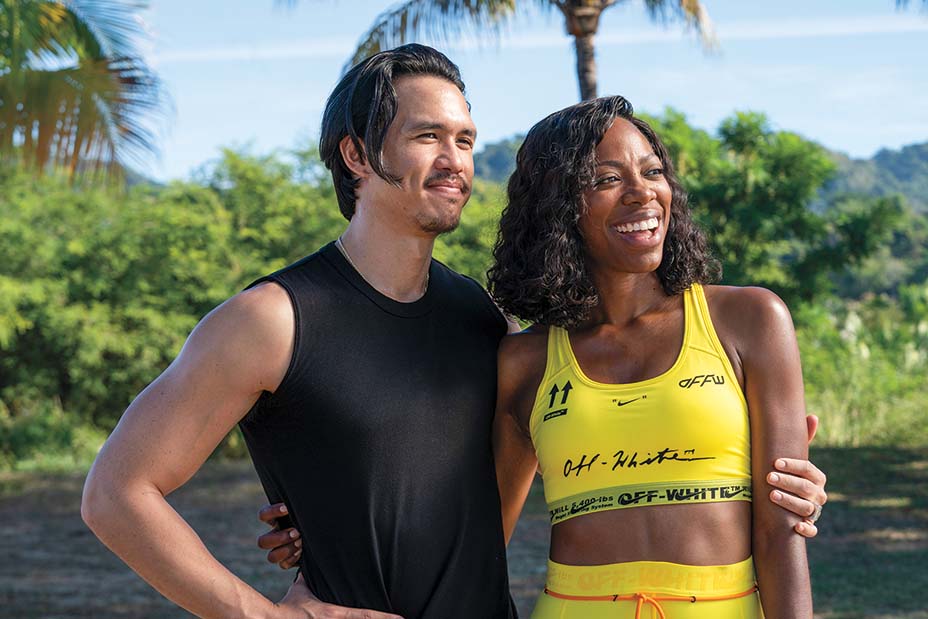