The sun had just dipped into the Pacific Ocean off in the distance, causing the Malibu sky to slip into shades of soft pastels on a near-perfect Sunday with temperatures hovering around 75 degrees and not a cloud in sight. With that as a backdrop, Brillstein-Entertainment Partners manager Andrea Pett-Joseph stood on a stage at the back of colleague Marc Gurvitz’s expansive backyard, where she was joined by husband Paul, son Brandon and three others who know her family’s fight well — Michael Hund, Jill Vedder and Heather Fullmer.

“I bet you guys all thought that we had two years to plan this because it’s been so long, but we didn’t — we had six weeks,” said Pett-Joseph, revealing a quick sprint to pull the strings and orchestrate Rock4EB!, a starry, rock and comedy-fueled fundraiser for a shocking skin condition called epidermolysis bullosa. The last such event, in 2017, featured sets by Sting and Chris Cornell and an introduction by Brad Pitt, all to raise research funds for EBMRF. Sunday’s show was just as A-list, with performers Adam Sandler, Eddie Vedder, Glen Hansard and Judd Apatow in front of guests like Julia Roberts, Sean Penn, Courteney Cox, Rami Malek, Kaley Cuoco, Elizabeth Olsen and dozens of others. Gathering those elements alone was quite a Herculean task, but so is living with epidermolysis bullosa, as the event highlighted.

EB is a rare genetic disorder that affects the skin, causing it to tear, blister and/or shear, which causes severe pain, disfigurement and wounds that sometimes never heal. In addition to all the boldfaced names, there were many people living and fighting EB in the audience, including Pett-Joseph’s son Brandon. “A lot has changed in two years since we were up on this stage, but our reason for being here remains the same: to fund a cure and help ease the pain of those living with EB,” said Pett-Joseph after doling out thank yous to vendors, volunteers, researchers and clients. “For our family, this has been an especially challenging year as new health issues arose for Brandon and challenged an already difficult struggle. That meant more hospital visits, more procedures, more difficult days getting out of bed and more painful wounds, but as we look around, we know that we are not in this fight alone. … In a town where relationships can be fleeting, your support has never wavered and that is not lost on us. It means a lot to us. By you showing up, we can show up for the EB community.”

It was a special sight for many to see. “I’m not into the whole celebrity thing but when all these A-listers show up and come out for this — it’s huge,” Cuoco told The Hollywood Reporter. A longtime client of Pett-Joseph, the actress has known Brandon nearly his entire life and thus has spent time with many EB kids: “This cause is so near and dear to our hearts. … I have gotten to know a lot of the families and I, every time I talk about it …” Just then Cuoco got choked up, with tears filling her eyes. “I am actually seeing a lot of people here I know.” One of those people, Isaiah, who battles EB, sat in the front row during every episode of season 12 of The Big Bang Theory. “He never missed a show. I talk to him all the time. There are certain families that I’m really connected with. I want to do everything I can to help and spread awareness that this has got to be cured. What these families go through is tragic,” Cuoco said.

Without that personal connection, not everybody knows what families go through either, explained Cox, a longtime client of Pett-Joseph’s sister, Cynthia Pett-Dante: “It’s nice to see the progress but there’s so much more to do. I love coming to this event, and it’s so wonderful to see these kids every year. There’s only like 500,000 cases in the world, so we need to get the message out. If you don’t know somebody, it’s hard to stay present with it, but if you were to know or meet one of these kids today, you never stop thinking about it.”

Olsen has met many of those living with EB, just like she’s met many of her peers who are represented by Brillstein and continually show up for the cause. “Cynthia and Andrea and all of the people they represent — it’s all about goodness and being good people and good citizens. They inspire everyone around them,” she said.

There was plenty to be inspired by Sunday — an event that saw the pairing of EBMRF with EBRP — even through the menu items being served up at various stations around the backyard. The event featured food and drinks from a host of vendors including Casamigos Tequila, Casa Vega, Wally’s, Pink’s hot dogs, Spartina, Slab, Fiji Water, Roxx Vodka, Nobu, Factor’s Famous Deli, D’Amore’s Pizza, J.Daniel Cuvee, Caffe Luxxe, Jennifer Naylor, Kona Brewing Co. and Eric Philippe champagne. Before the festivities kicked off onstage, Sandler, Vedder and Apatow were gathered in a quiet side yard catching up and doing a private meet-and-greet with some of the EB families.

“This backyard has one of the greatest vibes is for his event,” Sandler told THR. “Everybody is ready to give and it’s amazing musical acts and comedy. I’ve also known Brandon since he was a little kid. He’s an amazing guy — so cheerful and nice and a great spirit. I love being around him.”

Vedder, who has been active in EB fundraising for more than seven years, thanks to his wife Jill, a childhood friend of Ryan Fullmer, whose son with wife Heather has EB. Together, they formed Heal EB, which later merged to become EB Research Partnership. Through a connection with Catherine Keener, Vedder and crew joined forces with EBMRF, and he’s been active in trying to raise awareness ever since. “[EB] is one of those things that people don’t know a lot about,” the Pearl Jam frontman told THR. “It’s the most horrific conditions that nobody knows about. There is progress being made with figuring out how to fix mutated genes, and there’s a lot of doctors here tonight from places like Stanford or Minnesota and they are all communicating with one another. There’s been some big leaps and jumps. There are now clinical trials happening all over the place. We are getting there, but we need some decent dough to expedite the process.”

Hosting a one-of-a-kind concert experience certainly helps them inch closer to the goal. And multiple guests in attendance told THR that the combination of Sandler, Vedder and Apatow on the same ticket paired with a worthy caused proved too good to pass up.

Vedder treated the crowd to a 30-minute set, featuring notable songs “Far Behind,” “Society” and “Porch.” He also debuted a new tune that he wrote for a young boy named Eli, who was in attendance. Eli and his family participated in the recent WE Day courtesy of a video that promoted “Come Say Hi” as a way to familiarize people with what EB is. “This young man has taught me a lot,” Vedder said. “I was so excited to meet him tonight. I started to write a little song about him and his sister’s idea of ‘Come Say Hi.’ I promised I would finish by the time I saw him.” And he did.

Vedder also welcomed longtime friend Glen Hansard to the stage for a couple of songs, including a duet of “Falling Slowly.” Hansard won the Academy Award (with Markéta Irglová) for best original song from the John Carney film Once, a musical starring Hansard opposite Irglová. It’s a fact that Vedder made light of — for the first time ever, he said — because at the same time, in 2007, he was making the rounds on the awards circuit for his work on the Sean Penn film Into the Wild. After they performed “Falling Slowly” — with Penn looking on from the second row — Vedder joked, “And that song’s why mine didn’t win the Academy Award. I’ve never really brought that up, have I?”

The revelation drew a generous amount of laughter, as did Apatow’s brief comedy set. Tasked with entertaining the crowd as the crew broke down Vedder’s equipment and set up Sandler’s, the comedy creator turned his attention to the awkwardness of the scene. “Judd, what’s your worst nightmare ever? I don’t know, Eddie Vedder does ‘Porch’ and then we bring you out onstage. That would be a nightmare,” he quipped while wearing a Pearl Jam t-shirt. After a couple of impeachment jokes, Apatow introduced Sandler’s closing set.

“I don’t do this very much,” Sandler explained moments after taking the stage. “This is such a perfect night, such a great night. Everybody I met tonight, boom, I love you.” Judging by the reaction on the lawn, they loved him, too. Other guests in attendance included Leslie Mann, Maude Apatow, David Spade, Cindy Crawford, Rande Gerber, Kaia Gerber, Bill Maher, John McEnroe, Catherine O’Hara, Kim Basinger and the Gersh Agency’s Leslie Siebert.

Sandler commanded the stage for 60 minutes rolling through a mix of jokes and musical performances, some of which fans may have recognized from his recent Netflix special “100% Fresh.” There was “Station 69,” “Bad Playdate,” “Uber Driver” and “Mr. Slow Mo” and “Mrs. Slow Mo.”

He drew standing ovations for his touching Chris Farley tribute (“If we make enough noise here in Malibu tonight, maybe he’ll hear us,” Sandler sang) as well as following the night’s biggest surprise when he welcomed daughters Sunny, 10, and Sadie, 13, to the stage for a version of Taylor Swift’s hit “Lover.”

“They’ve been so excited and nervous,” Sandler revealed as his daughters got settled onstage, adding that they all flew in earlier that day from New York, where they got to catch Swift performing at his former home on Saturday Night Live. “That was a big night, man. Taylor Swift? Holy shit.” He also swore when gently ribbing on his daughter’s nerves, joking, “Your knees are shaking, right? How do you think I feel? Every goddamn night I do this shit.”

The performance, seen below, drew a standing ovation and loud cheers from the audience of several hundred. “Thank you for being so nice to them,” Sandler said to the crowd after it was over. “They were dying to be a part [of the show]. Girls, you did great! Sounded awesome — confident and cool. I love you — now get out of here!”

Once the girls left the stage, Sandler welcomed Apatow back from the night’s most amusing transition — from Swift’s “Lover” with his tween daughters to the intergalactic oral sex-inspired “Station 69” opposite Apatow. To close the show, Vedder joined them for a rousing rendition of “Let My Love Open the Door.” By the time they finished, it was after 8:30 p.m. and the sky was pitch black behind them and Pett-Joseph had nothing more to offer, other than gratitude.

“Thank you everybody, thank you,” she said in closing. “Hopefully in another year, we do this again.” 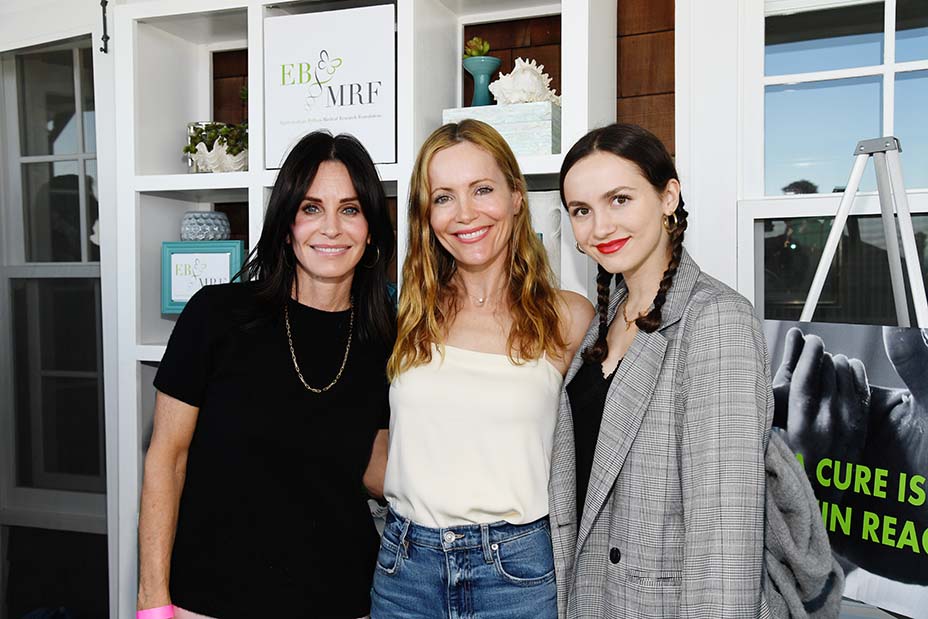 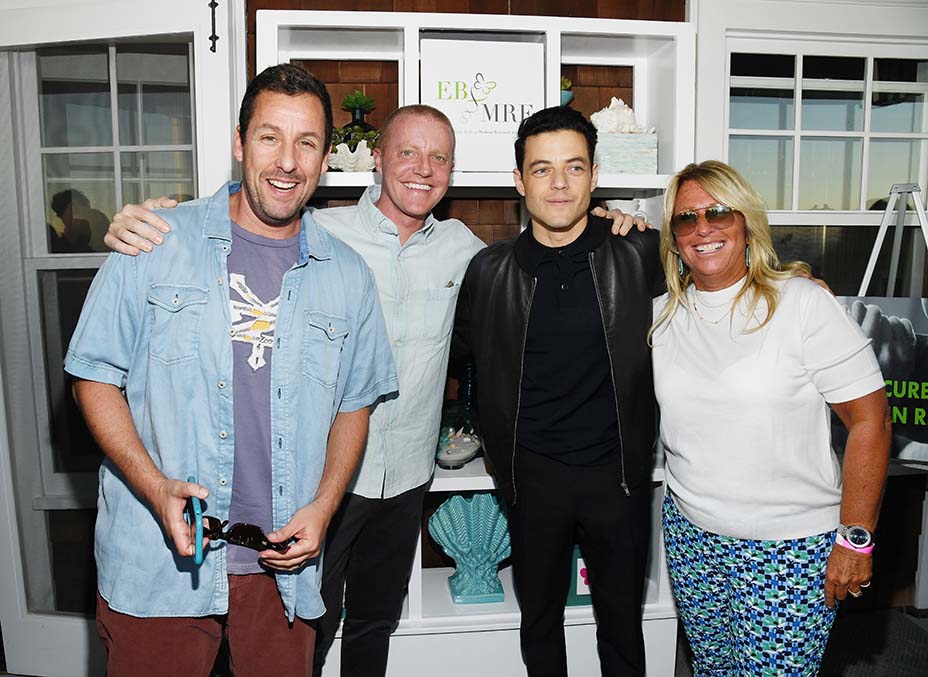 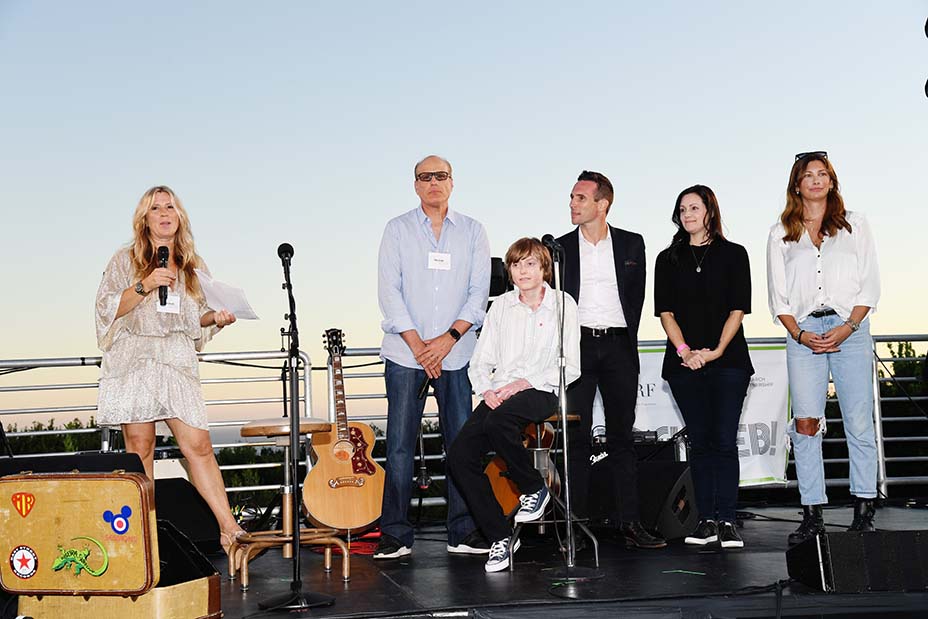 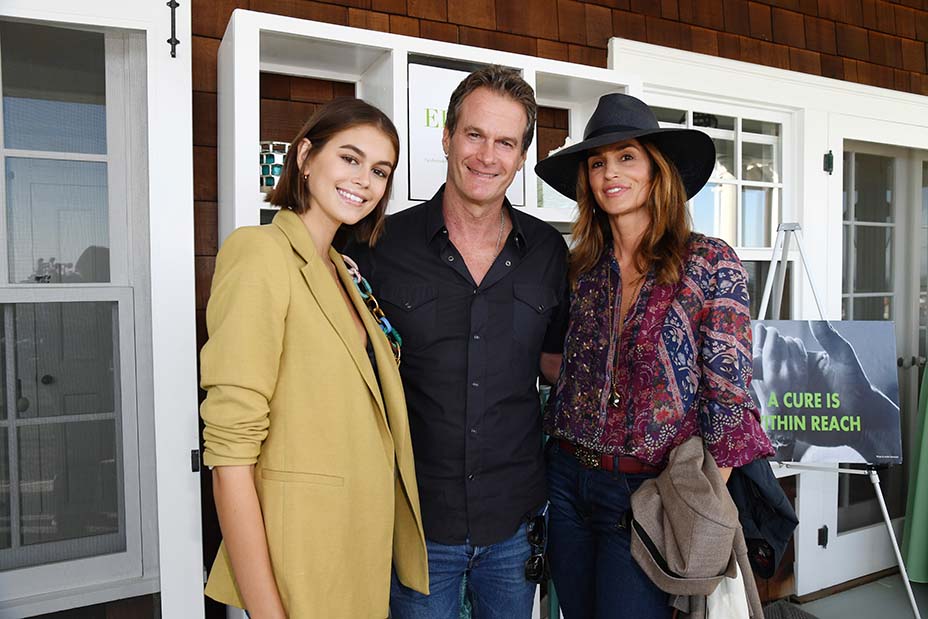 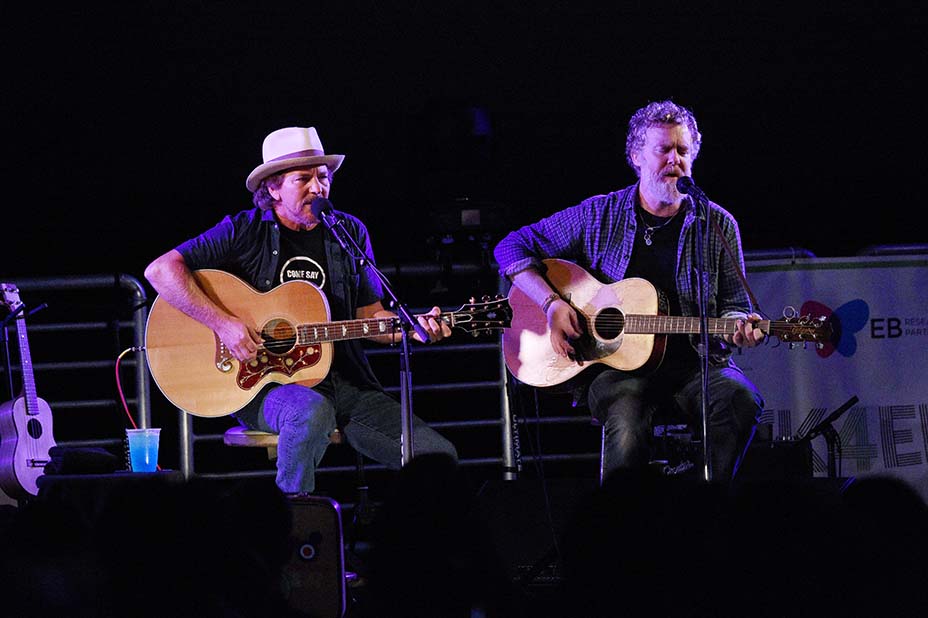 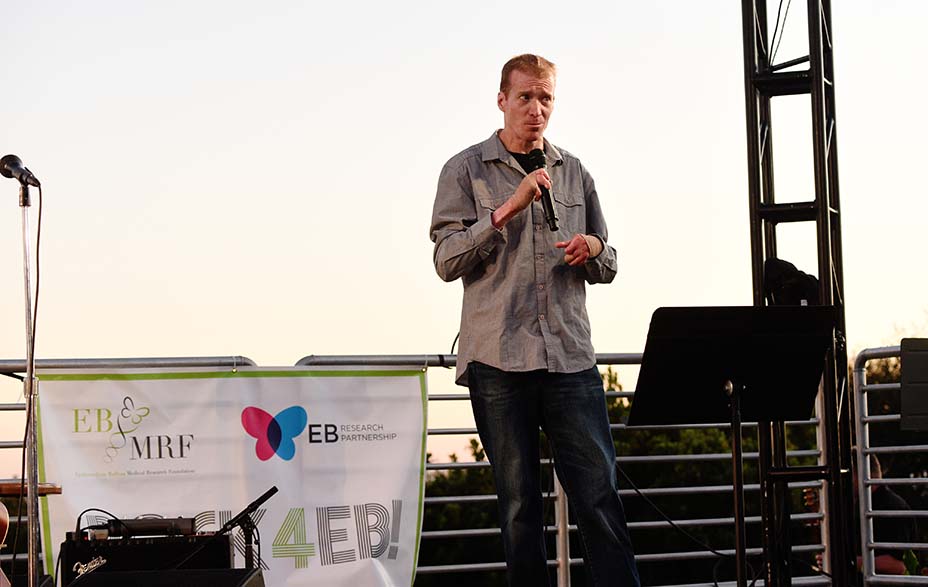 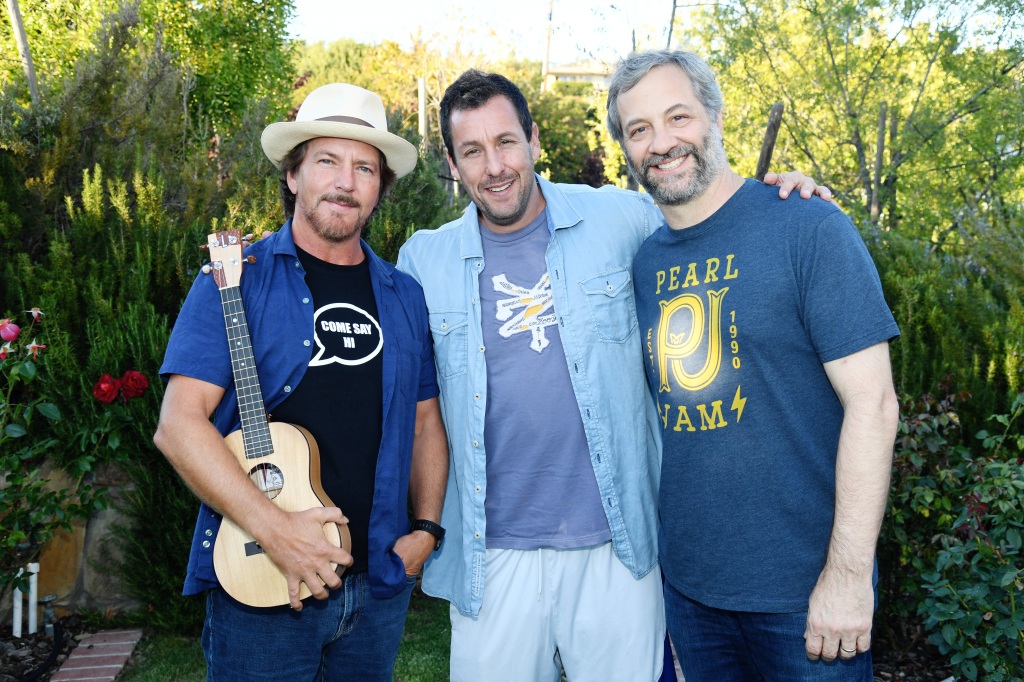 There are many, many highlights I recorded from tonight’s #Rock4EB but this one is pretty special. @AdamSandler handling guitar duties while his daughters Sunny & Sadie sing @taylorswift13 “Lover” in front of Julia Roberts, Sean Penn, etc. They’re major Swifties, and so good too pic.twitter.com/Z589j4tDBJ