Downton Abbey may have ended its six-season run in 2015, but the legacy of the show is still going strong nearly two years later.

New York’s Downton Abbey: The Exhibition, which opened for a limited engagement on Saturday, gives fans the opportunity for a fully immersive experience set inside the world of the historical period drama. The space features iconic sets from the series, as well as props and costumes that appeared throughout the show’s run.

In celebration of the exhibition, castmembers Michelle Dockery, Joanne Froggatt, Sophie McShera, Lesley Nicol and Allen Leech; executive producer Gareth Neame; and Kevin MacLellan, NBCUniversal’s chairman of global distribution and international, all gathered for a gala reception on Friday to celebrate the opening of the exhibit.

The three-floor exhibition takes place in a Victorian-era building in Manhattan and features replicas of various sets, all designed by the show’s Emmy-winning set designer Dolan Woods. Among the familiar haunts fans can check out are Mrs. Patmore’s chaotic kitchen, the servants’ quarters that double as a go-to destination for gossip, the Crawley family’s extravagant dining room and the bedroom that belongs to Lady Mary. 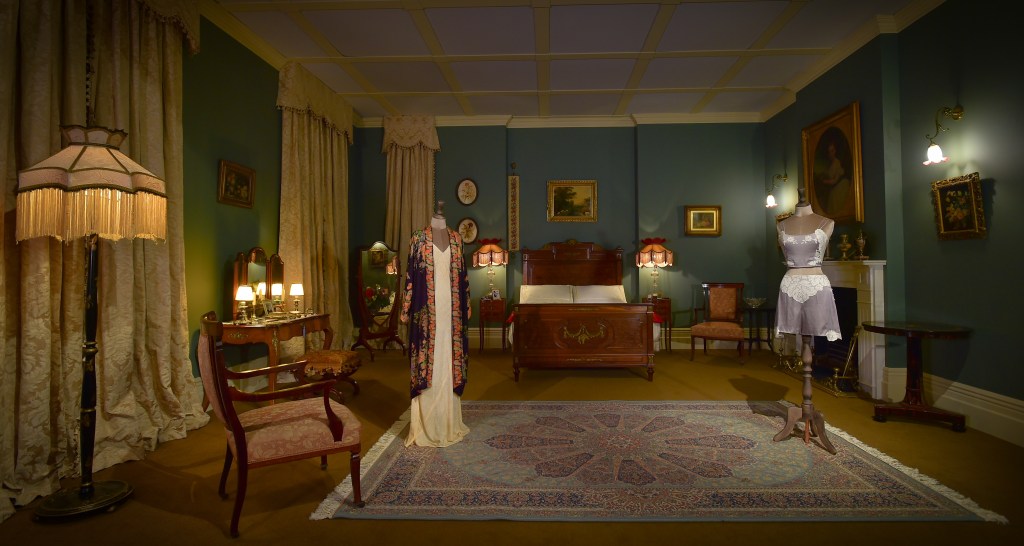 “When I walked into Mary’s bedroom, I had a lump in my throat very, very quickly,” Dockery told The Hollywood Reporter of her character’s room, which features everything from Lady Mary’s bedding to the wooden vanity. “It’s incredibly nostalgic for us to walk back into our world that we knew for the last six years, and it’s incredible.” The actress added that revisiting the room brought back many fond memories. “The scenes between Anna (Froggatt) and Mary, so much happened with them in Mary’s bedroom. Everything from those lovely scenes between Anna and Mary to the seduction scene with Pamuk, so all the memories came flooding back.”

Froggatt, who played Lady Mary’s maid Anna Bates, mentioned the specific details put into the replication of Mary’s bedroom. “I was amazed to see Lady Mary’s hairbrush in the bedroom because it’s the actual brush I used to use pretending to brush Michelle’s hair or wig, so it was lovely to see this intricate detail brought back to life again,” she said. The actress added that the bedroom and servants’ quarters are her favorite parts of the exhibition. “They’re the sets I spent the most time in, so for me they’re the sets that bring about a real emotive response and bring back all these very happy memories.” 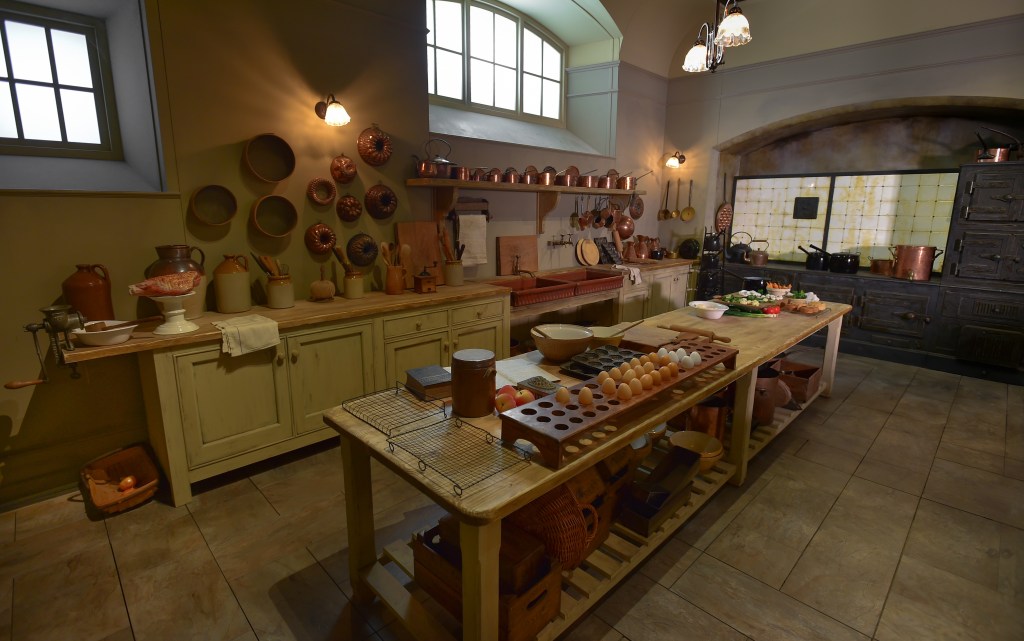 For McShera and Nicol, who played assistant cook Daisy and cook Mrs. Patmore, respectively, the kitchen is their favorite part of the exhibition. “I was so excited to get back in the kitchen, especially with Lesley,” said McShera. “It’s just so nice walking through. It was emotional for us both, and it’s so nostalgic and it’s exactly the same, to size and scale, and all of the props are there.” Everything from copper pots to ceramic bowls, chopping boards and knives are featured in the exhibition’s kitchen. “Every single thing’s the same, even the tea towel that I used to use. It’s a trip down memory lane.”

“Let me tell you, the kitchen is 100 percent exactly what it was,” said Nicol. “We felt like we had been transported back to West London.” The actress believes the exhibition will be well received by fans of the show. “I think the fans will just go, ‘Oh, my God. This is really like what it was and what it is,’ down to the props and everything. It’s not phony, not any part of it.”

“The kitchen was one of the most exciting to see for me,” added Leech, who played Tom Branson. “It’s where I started on the show. My first scenes were there, and I’ve always loved the camaraderie that the downstairs cast had.”

Thorough effort was put into the design of the replicated rooms. Everything from the silverware on the Crawley dinner table to the period-era bills of correspondence on Mr. Carson’s desk are placed to perfection. “People can see everything from the very delicate pieces of jewelry to the bells in the kitchen, telegrams that were written as props. It’s amazing, and people will absolutely love it,” said Dockery. 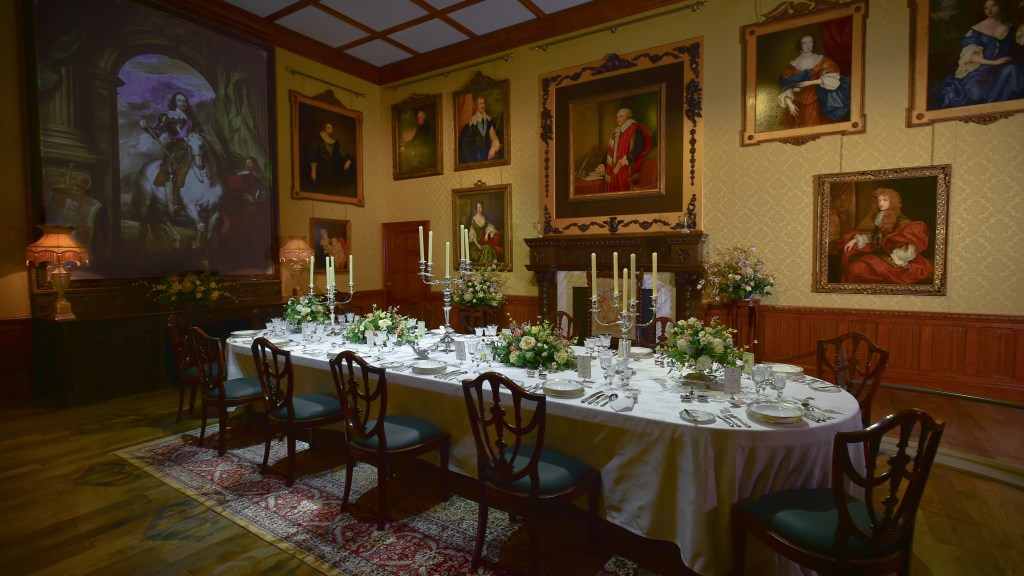 The Crawleys’ dining room features a fully set table with the silverware and place cards prepared as if a meal is about to be served.

Throughout the exhibition, CGI clips, which play scenes from the show and greetings from a number of main castmembers, are incorporated into a number of stations. A television is also propped up on the wall in the dining room set, playing memorable scenes that took place in the room on a loop.

The second floor features a number of props, including The Royal Families of Europe book given to Mr. Carson (Jim Carter) by his family as Christmas gift, the handcuffs used on Mr. Bates (Brendan Coyle) during his arrest for the murder of his estranged wife Vera (Maria Doyle Kennedy) and vintage necessities like a gramophone and a wireless dial.

Another highlight of the exhibition takes place on the third floor. Fans are able to view more than 50 costumes on display that were featured on the series. Memorable ensembles included are the wedding dresses worn by Mary and Edith (Laura Carmichael), Rose’s (Lily James) royal presentation dress, Lord Grantham’s (Hugh Bonneville) hunting pinks and Daisy and Patmore’s uniforms. “Who would have thought they would exhibit those?,” joked McShera about her character’s only costume.

For Neame, he takes the most pride in the costumes displayed throughout the exhibition. “You’ve never before seen all of these 50 costumes in one place. You can actually stroll around from one costume to the other and you think, ‘I remember that story. I remember when she wore that dress,’” he said. “In a way, you see the narrative best spelled out through the costumes.”

“I worked on a lot of television and typically you don’t take the time and care to build a costume that two years after the last episode you’re still able to display, and they look as if they could still be worn today,” said MacLellan. “They can actually be worn again today. There’s a level of quality to these costumes that most shows don’t come close to.”

The cast and crew also addressed the possibility of an upcoming Downton Abbey film during the event. “There still seems to be such a love for the show and appetite still for the show. The rumors are still circulating around for the film, and it only goes to show that people still have an appetite for Downton and are not quite done with it yet,” said Dockery.

McShera said that while everyone seems to be willing to join in on a film, it’s a matter of getting the cast together all at once. “They’ve been saying it’s like herding cats, so it’s just a case of getting everyone together, but there’s definitely a will for that to happen,” she said. Froggatt mentioned that she is hopeful for the potential project. “It’s just putting it together, which is out of our hands,” she said.

MacLellan also discussed his interest in bringing back the universe of Downton Abbey for a film adaptation. “It’s something we’re willing to work on. We get a lot of feedback from fans that are still very interested in seeing more of Downton Abbey,” he said. “We at NBCUniversal recognize the strength of the brand, and it’s an interesting idea for us to move forward with.”

Downton Abbey: The Exhibition is located at 218 W. 57th St. and is open from 10 a.m. to 8 p.m. daily. Additional locations in the U.S. are expected to be announced at a later date.

Watch a video preview for the exhibit, below.