Gwyneth Paltrow surprised her stylist Elizabeth Saltzman with a big hug at The Hollywood Reporter‘s annual event honoring Hollywood’s 25 Most Powerful Stylists on Tuesday night at the Lenny Kravitz-designed Stanley House provided by Williams & Williams Estates and located above the Sunset Strip in Hollywood.

“It feels amazing,” cheered London-based Saltzman, who ranked No. 2 on the eighth annual list of the most influential red carpet tastemakers. “I feel very lucky and I’m super happy that my team and I get to celebrate the hard work that goes into the stuff.”

Paltrow, who has worked with Saltzman since 2007, divulged to the crowd gathered at the $38 million estate that she was trying to talk her image architect into a haircut. “Every six years or so I cut Elizabeth’s hair off and she donates it to Locks of Love, so I’m trying to get her to do it,” Paltrow said. Of her glamour guru’s ability to enhance her fashion sense, Paltrow said: “She really understands a woman and really pushes us all forward. She is best in class.”

The 25 Most Powerful Stylists in Hollywood 2018

Saltzman was photographed for one of four covers for THR‘s eighth annual stylists issue along with her client Saoirse Ronan. Three other covers unveiled at the event feature No. 3-ranked stylist Samantha McMillen with client Elle Fanning; No. 4-ranked stylist Elizabeth Stewart with Gal Gadot; and top men’s stylist Ashley Weston with client Chadwick Boseman.

The star-studded dinner, staged poolside on the patio of Stanley House with its panoramic views of downtown Los Angeles to Century City and the ocean, honored the stylists whose work was rolled out on red carpets throughout awards season. Also in attendance was Armie Hammer, who has been working with No. 6-ranked Ilaria Urbinati since the start of his career. “She takes fashion and makes it accessible,” said Hammer. “She has fun choices and you always get to do something unique and interesting. She does always try to put pinky rings on me, though, which I refuse.”

“I feel like the photo captures our relationship really well,” said McMillen of her dreamy cover shot with Fanning. “Samantha has watched me grow up and she’s like a mom in a way,” added Fanning, who was joined at the bash by her big sister and fellow McMillen client, Dakota. “Styling is so personal and they are with you all the time — she’s like family.”

Inside The Hollywood Reporter and Jimmy Choo's Power Stylists Dinner

Other power stylists, including No. 12-ranked Law Roach and No. 7-ranked Micaela Erlanger, rubbed elbows with fellow honorees and stars while sipping on Casamigos tequila cocktails and champagne from Helen’s Wines. Grown-ish star Yara Shahidi jumped into an interactive photo booth with No. 14-ranked stylist Jason Bolden, who later shared the booth with fellow list-makers Tara Swennen (No. 17) and No. 25-ranked duo Wayman Bannerman and Micah McDonald.

“This is super exciting — it’s something that you work for your whole career,” said Ashley North of being named one of the top men’s stylists for the first time. “Ashley North took a chance on me before I had any success and walked me to a place of fashion and style and understanding — and I wouldn’t have any of the knowledge I have if it wasn’t for her,” said client Kevin Hart.

Guests were treated to a three-course dinner on the home’s sprawling deck with a menu created by Jon Shook and Vinny Dotolo (of L.A. hot spot Jon & Vinnys) in the home’s open-air kitchen.

THR fashion and beauty director Carol McColgin, who co-hosted with style and fashion news director Booth Moore in partnership with Jimmy Choo’s creative director Sandra Choi, thanked those in attendance during their toasts and spoke to the influence of being a power stylist. “This year, it was especially exciting and inspiring to see stylists united to make red-carpet statements, or as it turned out, black-carpet statements, in support of Time’s Up,” said McColgin. She added, “The stylists in this room are economic powerhouses with your direct influence on designers and consumers. You are image gurus, film PR’s secret weapons and social media stars, as well.”

Moore, who moderated THR’s first-ever stylist roundtable for the issue, pointed to a year in which the red carpet was a place for championing causes, as she paraphrased veteran men’s stylist Jeanne Yang’s comments during the roundtable: “I think it’s great that the red carpet has become about more than ‘What are you wearing?'” She added that through the roundtable discussion, she wanted to give the stylists a voice to speak on issues that were championed on the red carpet.

Of the importance of celebrating stylists, Yang said: “I was with Arianne Phillips [who designed the Time’s Up pin] and what I thought was really significant is she said when they got all together [to talk about Time’s Up], all of these women in Hollywood, she said she was one of the few below-the-line people there. And this night and issue is a nice acknowledgment of people who are below the line, which you don’t always see in Hollywood.” 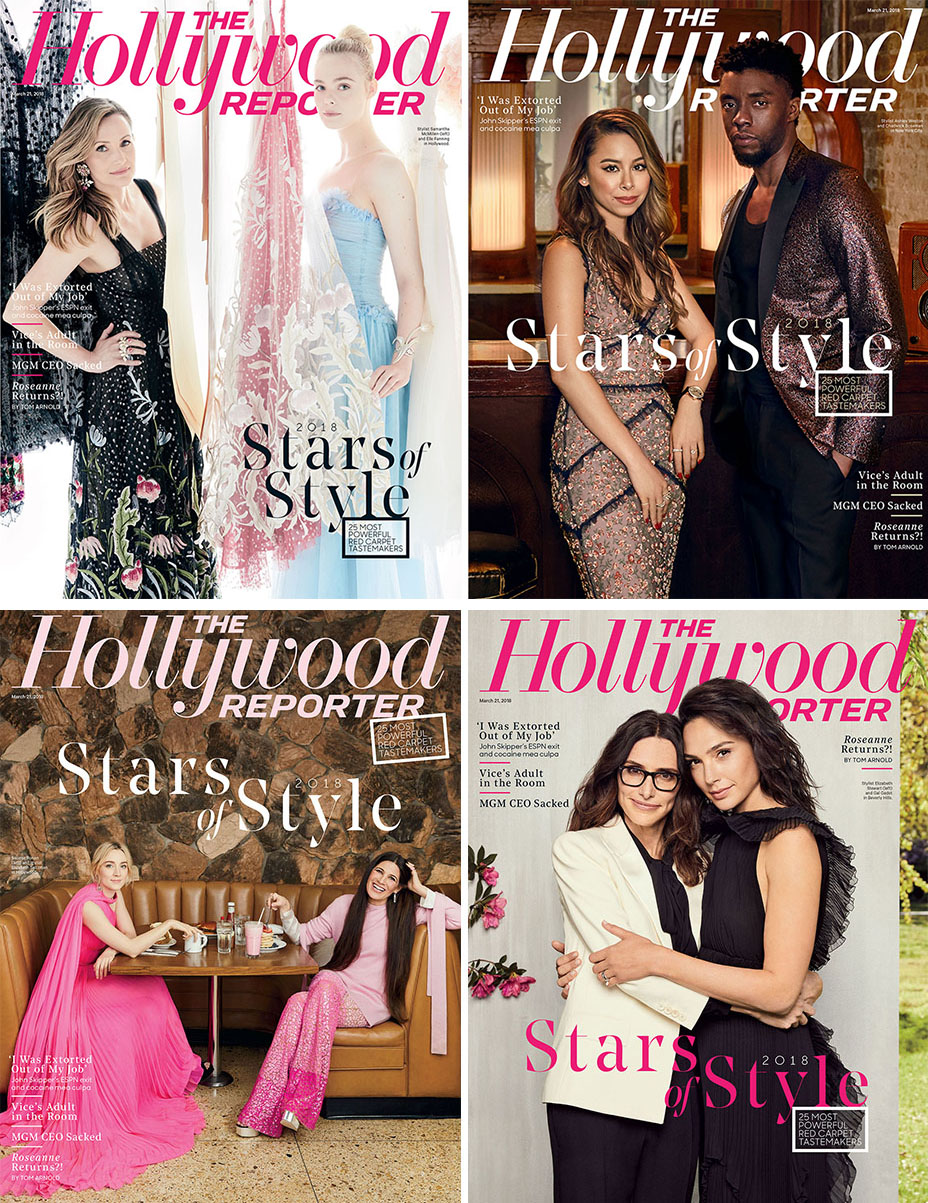