Ezra Claytan Daniels’ Upgrade Soul was one of the most critically acclaimed comic books of last year when it was published by Lion Forge Comics. However, the psychedelic story about an elderly couple who take part in an experiment that results in the creation of seemingly superior clones of themselves — currently in development as a movie from Aperture Entertainment — started life as an app six years earlier.

Following the success of the print comic version of the story, Daniels and collaborators Erik Loyer and Alexis Gideon have revised and expanded the Upgrade Soul app far beyond its original 2012 version, coinciding with the release of Gideon’s soundtrack to the project.

Daniels told Heat Vision about his vision for the project, via email.

So, why digital comics?

I really just want to tell stories. For me, that’s all about connecting with other people and putting my stories in front of as many faces as I can. There’s a lot I love about the things you can do with digital devices, and there’s certainly an environmentalist argument to be made, but the biggest thing initially was just the accessibility.

I’m in a cafe in New York right now, looking out the window wondering how many of the people walking by have ever been inside a comic shop, or ever browsed the graphic novel section of a bookstore. But almost every one of those people is looking at their phone. I feel like that’s the place I need to try to put my stories.

It’s not enough for me to have Upgrade Soul out there as a glorified PDF in a standardized digital comics reader. Sure that’s convenient, but it just seems like such a missed opportunity. There’s a Wild West feel to new technologies, where everyone’s trying to figure out the methodologies. The easiest thing is to just reproduce existing paradigms in the new form, but more adventurous creators see the opportunity to take wild risks that’ll help define the new paradigm. Most of those risks end in failure, and that’s the point. I’m a structure nerd. I get the most reward not out of experimenting, but in trying to uncover the lessons and helping to codify them.

My collaborator, developer Erik Loyer, and I first bonded over interactive narrative theory. We never had more fun together than in the early days of the Upgrade Soul app, when we were trying to define the boundaries of comics to create something that could only exist digitally, but still felt like reading a comic.

You mentioned Erik and the early days of the app. How did it get started? Not Upgrade Soul as a story, but the app itself?

Erik started developing an immersive comic reader, a custom Unity add-on called Panoply, built around a reactive music engine, and asked if I wanted to do something for it. Of course I was in.

I was a few years into developing Upgrade Soul by that time and didn’t have a publisher. I started drawing it and structured the pages in a way that was designed for screens first but could be seamlessly ported to print. If you look at the book, every page is split down the middle horizontally; it’s essentially two iPad screens stacked on top of each other.

I brought in Alexis Gideon, an experimental hip-hop producer and composer from Pittsburgh, to do the music. Alexis and I were old friends from the Chicago DIY art scene. We share a very particular taste for cult films and weird horror, and I just loved his music. He’s one of those guys that makes you feel sad about the state of our culture because in a just world, he would be a household name.

We launched the app originally in 2012, with the plan being to launch a new chapter every month or two. After a year of updates, the workload started outweighing the revenue, so we put it on hiatus. I chipped away at Upgrade Soul for the next six years, and eventually put it out last year in a print edition with Lion Forge. With all the attention the book got — Dwayne McDuffie Award win, Eisner and Harvey noms, two Ignatz noms, two Ringo noms, a Dinky award win, several major year-end list nods and a feature film in development with a AAA director — now seemed like the time to finish and relaunch the app.

What does this version of the app add that’s missing in the print version?

There are a few novel features in the app, like dynamic parallax depth effects that make every panel feel like a 3D picture box. There are also behind-the-scenes features. But the star of the show is the way Upgrade Soul centers music as a major component of the narrative. Erik’s Panoply engine marries Alexis’ score to your reading pace, so every panel you swipe in triggers a subtle change in the music that amplifies that emotional beat.

This is a language that’s been honed in film for over 100 years, and when it works, it creates undeniably heightened moments of drama, and sometimes unbearably amplified stretches of tension. Think about Bernard Herrmann’s shower scene strings in Psycho, or the nerve-shredding drone that accompanied Heath Ledger’s Joker scenes in The Dark Knight.

While animation, spoken dialogue or even sound effects can create a jarring, discordant feel in digital comics, there’s nothing about music that defies the feel of reading a comic — particularly when the music, just like turning pages, flows at your pace. In fact, there’s something about the fact that you as the reader are triggering these moments that somehow makes for an even more immersive experience than film. That’s the power of comics.

Are you concerned about people who aren’t into digital comics, and only want to read printed works?

I constantly hear people say things like, “It’s not a comic unless I can turn the page,” or “I just like the feel of paper in my hands.” But these people will happily spend way more time every day holding a smartphone in their hands than a book. I get defensive, honestly, because I feel so strongly about this reading experience.

Sometimes I remind people that print was once a newfangled technology that was vehemently pooh-poohed by those from the old oral tradition. Sometimes I remind people that commonly defining characteristics of comics like page size, page turns and book length are technical limitations of printing technology that do nothing but impose superficial constraints on an artist’s vision. But most of the time I tell people to just shut up and try the app.

The first chapter is free to check out, and the whole story can be unlocked through October for a discounted price of $6.99. 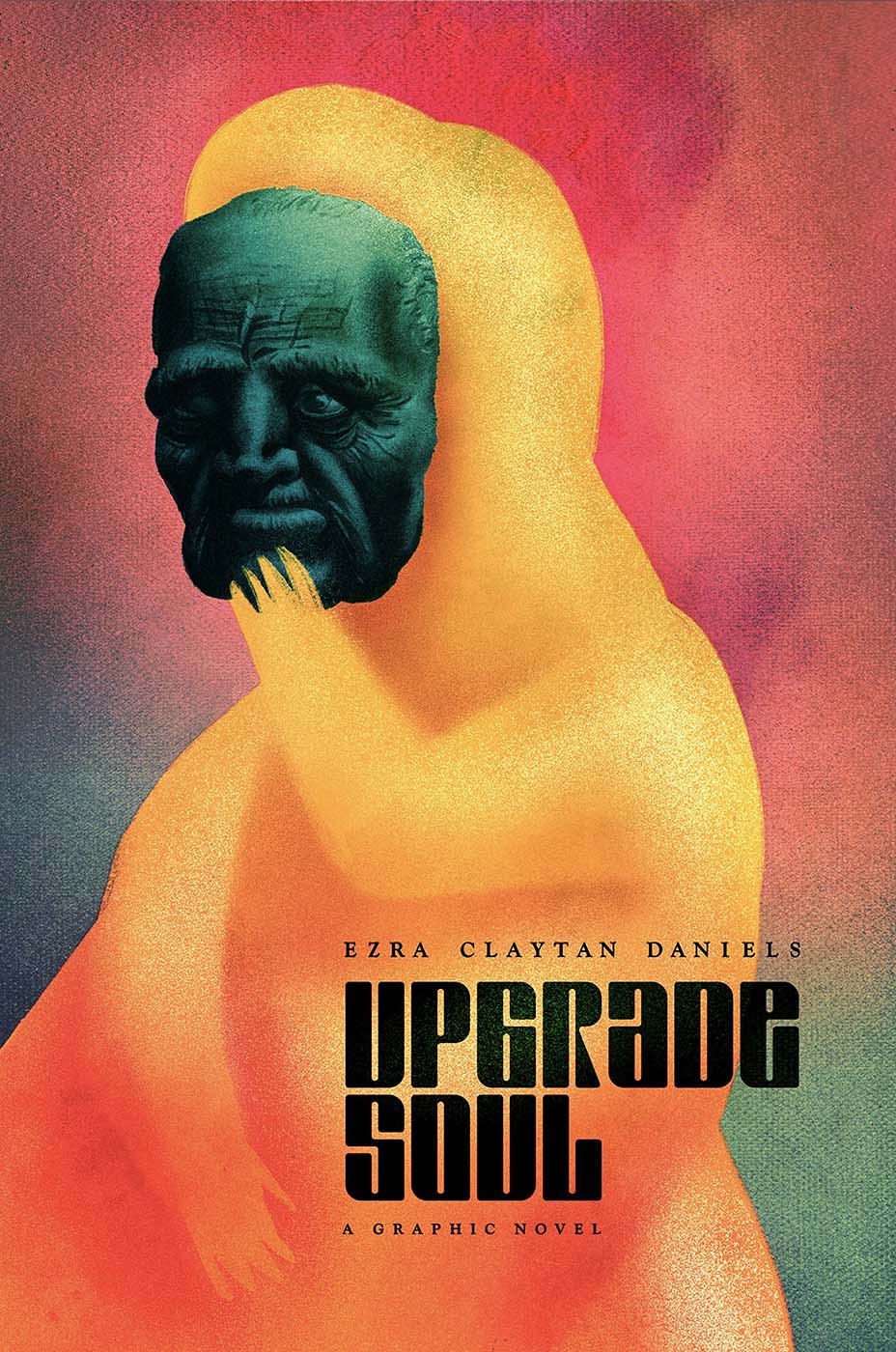 The newly relaunched Upgrade Soul app is available for free download now, with the entire book available through Oct. 31 for $6.99. (Starting Nov. 1, the price rises to $7.99.) Additionally, the original soundtrack is now available from For Practically Everyone Records and via Bandcamp.