Once upon a time…in Sonoma County.

Leonardo DiCaprio took a weekend break from filming Quentin Tarantino’s Helter Skelter-focused Once Upon a Time in Hollywood to head to wine country for a gala fundraiser for his Leonardo DiCaprio Foundation and its global environmental efforts. And according to insider accounts, it was an elegant affair that helped LDF reach a major milestone of doling out more than $100 million in grants.

Speaking of numbers, according to sources, the event itself raised in the neighborhood of $8 million courtesy of a ticket sales (minimum of $10,000 per ticket) that pulled in around $500,000 while the live auction is said to have netted something close to $7.5 million.

Amy Schumer Says She Reached Out to Leonardo DiCaprio Before Oscars Joke, Got Death Threats Over Kirsten Dunst Bit

Co-hosted by DiCaprio and Laurene Powell, widow of Apple chief Steve Jobs, the Sept. 15 event was presented in partnership with Jackson Family Wines and title sponsors Bank of America and Tiffany & Co. It marked a major location change, too, as DiCaprio previously traveled to the South of France for St. Tropez fundraisers, which drew hundreds of guests (including billionaires and supermodels).

This year, only 300 guests got past the velvet ropes for much more intimate event that included a well-curated live auction by DiCaprio’s longtime art adviser Lisa Schiff along with Marika Kielland of SFA Advisory and Sotheby’s auctioneer Simon Shaw. The auction featured a collection of fine art from artists Ai Wei Wei, Richard Prince, David Hockney, Wayne Thiebaud, Frank Gehry, Matthew Wong, the Haas Brothers, and others.

DiCaprio took a moment at the podium to reflect on these last two decades, his commitment to the environment and to make an announcement of additional grantees. “When I founded LDF 20 years ago, I did so based on the simple idea that we could make a real difference by directly funding some of the most effective environmental projects — whether it be individuals, grassroots movements or major nonprofits, we wanted to focus on getting critical funding to those who could have the greatest impact,” said Leonardo DiCaprio. “Since 1998, we have supported over 200 projects on every continent and in every ocean from habitat and species conservation, renewable energy, climate change, indigenous rights, and more. I am pleased to announce $11 million in new grants across our six program areas, bringing the total financial impact of LDF to over $100 million.”

The night was not only about the numbers. Apparently, it was also about DiCaprio’s adoration for a controversial piece of menswear. Chris Martin of Coldplay also made the short trek to Sonoma County to perform a set of songs. (Also there: his new girlfriend Dakota Johnson and one eye witness said their romance looked to be going strong.) He dedicated the Celine Dion classic “My Heart Will Go On” to DiCaprio, and he performed an original composition about cargo shorts.

According to one attendee’s Instagram video, Martin said, “I studied him very closely for about five or six years and what became clear to me was his unbelievable service, his commitment to the business of cargo shorts…. This is a guy, he’s seen cargo shorts and he said, ‘I’m going to save these shorts from extinction. They should have gone out about 25 years ago. I’m personally going to fund the sort of renaissances of cargo shorts.'” 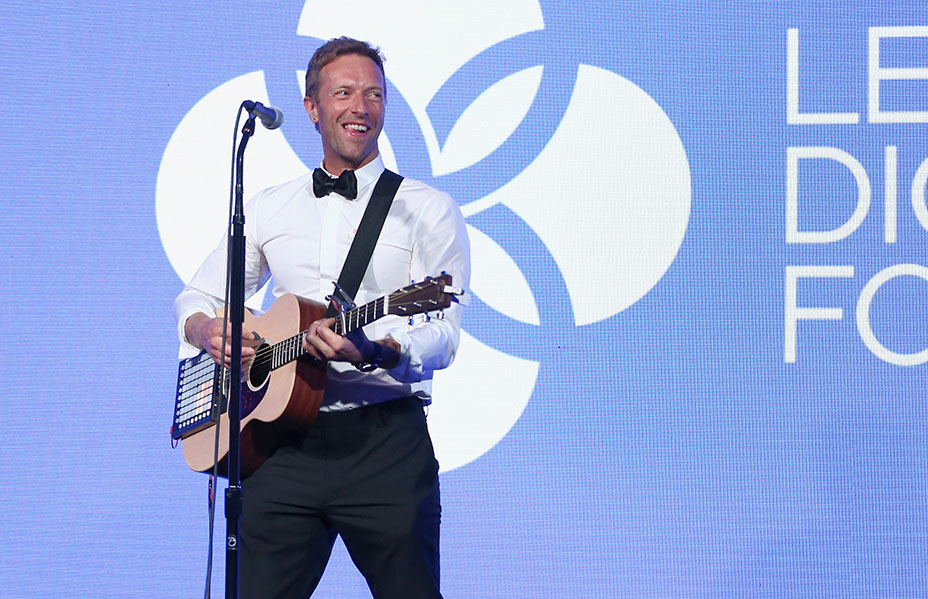 Guests who got to hear the song’s debut included Mike Ovitz, Tamara Mellon, Sophia Lauren, Catherine Deneuve, Edward Norton, Naomi Campbell, Tobey Maguire, Lukas Haas, Mike and Irena Medavoy, Peggy Siegal, Vivi Nevo, producer Steve Golin and Mark Ruffalo, the latter of whom flew in from the Avengers set to address the crowd from the podium. Many of the aforementioned names stayed at the Calistoga Ranch before heading to Matanzas Creek Winery where armed security and police dogs helped to keep the peace.

DiCaprio looked to be enjoying the moment, and the entire evening which he spent seated next to Dr. Jane Goodall. The famed English primatologist and anthropologist was named to LDF’s new independent board of directors along with indigenous rights leader and former special adviser for Native American affairs to President Obama, Jodi Gillette, LDF CEO Terry Tamminen, Robert Hrtica and Adam Bernholz. 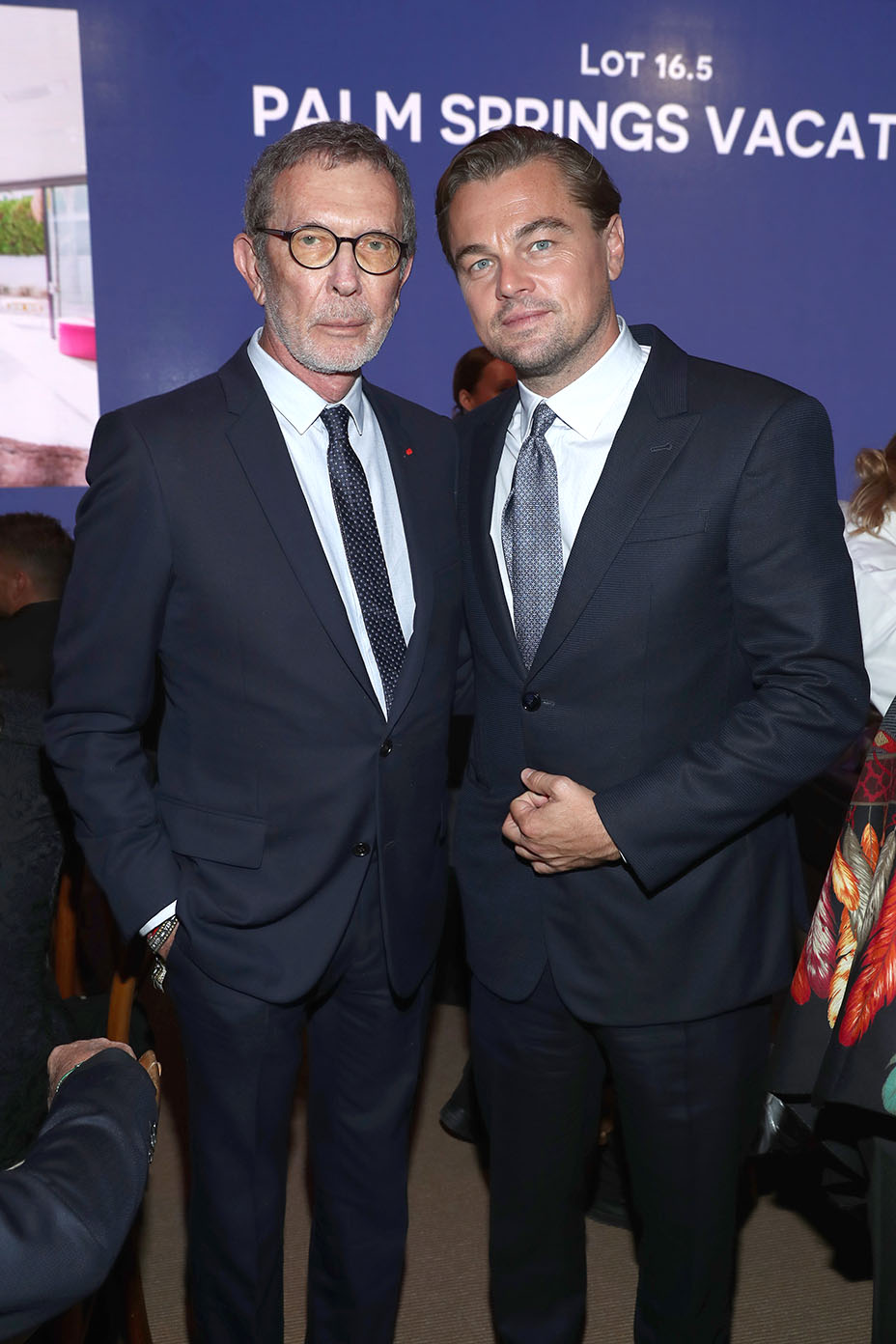 “This year we honor extraordinary individuals and organizations for their contributions to protecting our planet, and for upholding the core beliefs of LDF,” said DiCaprio. “Through his art, Wayne Thiebaud has invigorated and inspired people to take action to protect our planet. Arne Glimcher, working with the African Environmental Film Foundation, has been instrumental in educating the public on environmental concerns throughout Africa. We are also pleased to recognize LDF grantees Amazon Frontlines and Ceibo Alliance. The partnership these organizations have formed has proven essential in leading a resistance to defend indigenous territory and culture. Their courageous work has prevented rain forest destruction throughout Ecuador and we honor them for their work.” 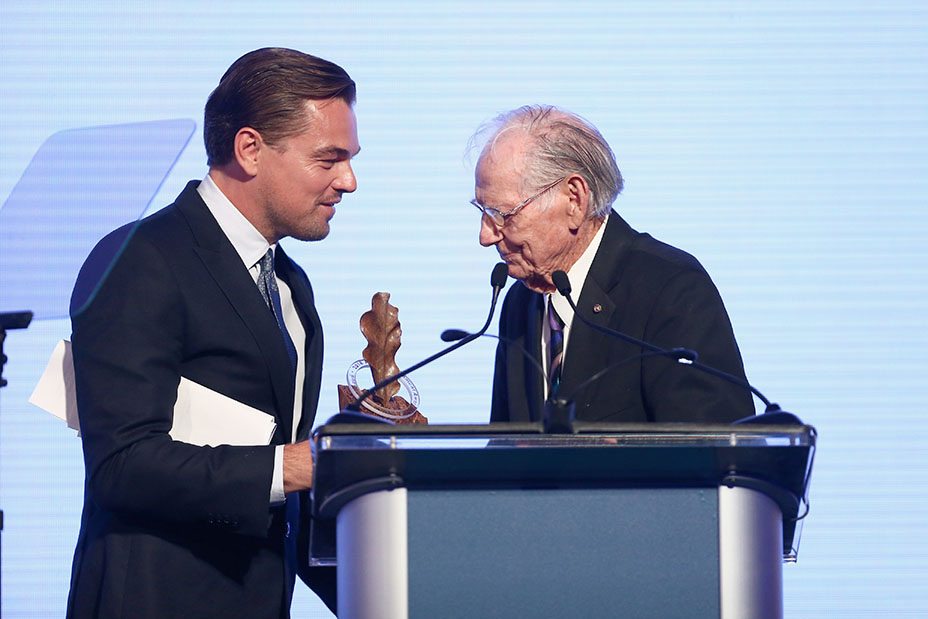 Also announced during the evening were donations to support disaster relief efforts for those impacted by Hurricane Florence, and to Just and Resilient Future Fund for those affected by the Napa Valley fires.

After all was said and done, one attendee told The Hollywood Reporter that it was hard to take their eyes off DiCaprio: “His star shined brightly last night.”

We loved being in Sonoma to support Leo and all the amazing work he does for our planet through the Leonardo Dicaprio Foundation . We were all in awe of hearing the great Jane Goodall speak from her heart . She has lived her life with purpose . #janegoodall #leonardodicaprio #leo #leonardodicapriofoundation #sonoma #ldf @leonardodicaprio