After all-star tributes and the honoree’s film reel should come a hug.

That’s what Rajendra Roy, chief curator of film at New York’s Museum of Modern Art, noted toward the tail end of Monday night’s Film Benefit honoring George Clooney. Roy, seated alone in one of MoMA’s theaters and staring directly into the camera, was explaining how, if this were any other year, he would have the honor of welcoming the evening’s special guest to the stage for a warm embrace followed by a typical acceptance speech.

The challenging year and the COVID-19 pandemic may have put a stop to large scale gatherings like MoMA’s Film Benefit, effectively erasing many a movie star hug and countless air kisses, but the museum and title sponsor Chanel still managed to pull off a sleek digital event. Clooney still showed up, virtually at least, to accept, even dressing for the occasion in a suit and tie. He kicked off his remarks by promising Roy a rain check of sorts — “we’ll get that hug in soon” — before acknowledging the unusual circumstances.

“Isn’t it dumb that we can’t all be in the same room tonight? It’s such a strange year.” It’s still a big one for 59-year-old Oscar-winning actor, filmmaker, producer and humanitarian, who was being feted on the eve of the release of his Netflix epic The Midnight Sky. “It’s an honor to be in the company of this incredible list of honorees, some are dear friends, a couple whom I don’t care for. You know who you are; I’m looking at you, Alfonso,” Clooney joked, ribbing Gravity collaborator Alfonso Cuaron and referencing a list of previous recipients that includes Martin Scorsese, Cate Blanchett, Tom Hanks, Tilda Swinton, Quentin Tarantino and Julianna Moore.

Clooney then recalled his first trip to MoMA at the age of 12. “My parents brought me and my sister to New York. Just standing in front of the museum, I’d never seen anything like it. Then I walked inside. I was a kid from a small town in Kentucky and it opened my eyes to a whole world, a world where anything is possible. That’s what the Museum of Modern Art means to me. And your support for young filmmakers and film preservation, they’re deeply personal. Your commitment to artists, through your partnership with Artist Relief, is inspiring in the most difficult year.”

The latter sentiment referenced the MoMA’s commitment to share funds raised from the event with Artist Relief, an emergency initiative created by a coalition of national arts grantmakers to offer financial support and informational resources to artists across the United States amid the COVID-19 pandemic. In doing so, MoMA offered a $25 ticket to Monday night’s event to make it affordable and accessible to a wider range of guests with those funds going directly to Artist Relief. Also new this year, Chanel, a longtime patron of film and the cinematic arts, expanded its support to encompass the role of lead sponsor of film at MoMA.

Clooney then turned his attention back on 2020, leaning on an adjective that has become quite common during the pandemic: unprecedented.

“We have faced an overwhelming threat that has affected people all over the world. But what I want to say to all of you is that we’re going to get through it. This scourge that’s disrupted so many lives, it’s terrified us, wrecked our economy, left us feeling like there’s no hope,” he said. “Well, now we see there is. There’s more than hope. There is a bright light at the end of this tunnel. We will soon say goodbye to the dark ages. Goodbye to fear. Goodbye to doubt. Goodbye to the anxiety. Once this is over and Trump’s out of office, we should probably do something about COVID, too. That would be important. Here’s to 2021. We’ll see you in person then.” 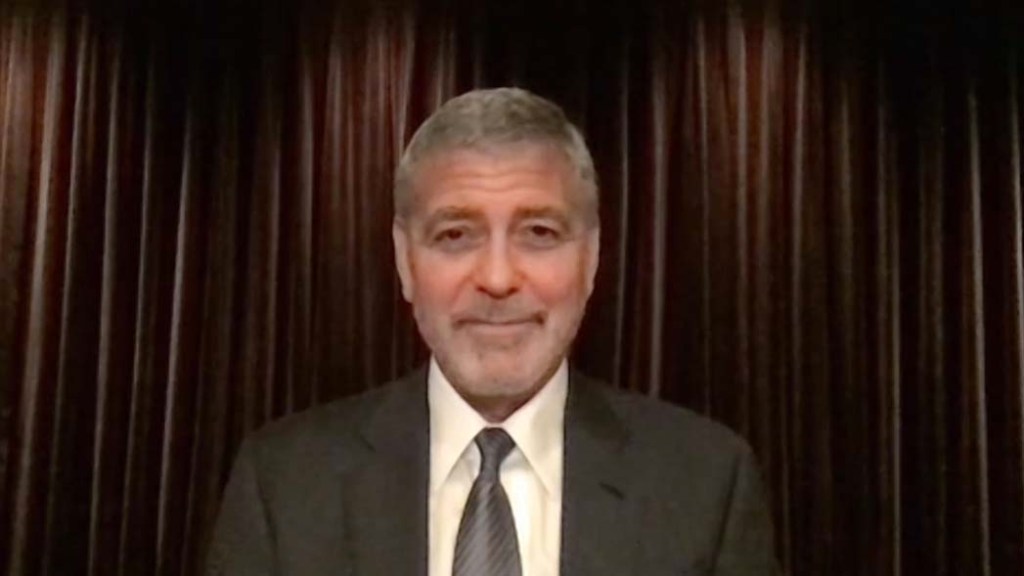 The event opened just after 8 p.m. EST with MoMA director Glenn D. Lowry who doled out the requisite thank-yous to Chanel, Netflix, the museum’s film committee and Clooney’s many friends and colleagues.

Up first was Michael Ovitz, who is a longtime MoMA trustee and chair of the film committee. Ovitz recalled meeting Clooney for the first time in 1994 on the set of ER and being struck by how he brought that something special to a show that had been rejected by just about everybody for its intensity. “George Clooney is so gifted and so talented,” Ovitz said. “He brought warmth and created an opposing dynamic to the style of the show that made it one of the most popular in history.”

ER was well-represented thanks to Margulies. She credited Clooney with being responsible for her career, even going so far as to share the story of how he convinced her to turn down a competing gig.

“I feel so grateful that you were the one who actually stopped me from taking [another] job, because you were the only one who actually cared enough to call and say, ‘By the way, don’t take the job. I think you tested well and we tested well together. If you just could hold off for a couple of weeks, I think you’re going to get a series regular offer,’” she detailed. “Forever in my life, I am indebted to you, my friend.” 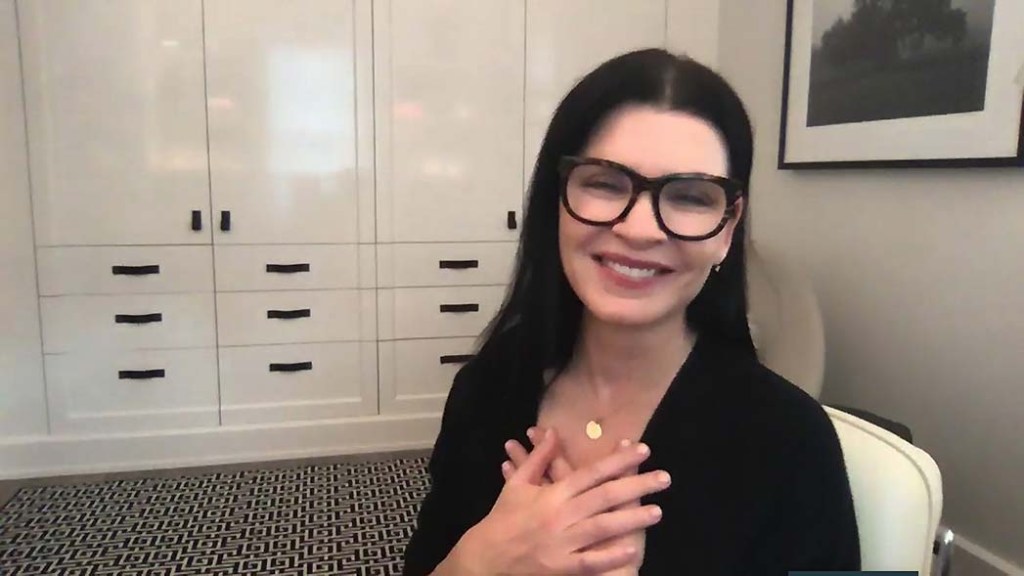 Rockwell, who toplined Clooney’s 2002 directorial effort Confessions of a Dangerous Mind, said he first met Clooney with Drew Barrymore while he was filming Charlie’s Angels. “We met Lucy Liu at a karaoke bar in a strip mall in the Valley. We did karaoke and I immediately loved him,” said the actor. “I think you’re the shit man. I think you’re the bee’s knees.”

Letterman also delivered his ‘how I met George Clooney story’ but his was less believable in that he claimed they met at a fundraising cocktail for conservative Republican Mitch McConnell. Wright said that he met Clooney on the first film they made together, Syriana, but, coincidentally they also had an encounter outside MoMA. He watched as Clooney exited the building and got in a waiting car.

“Phones popped out of pockets and purses and cellular usage was spiked on that intersection exponentially. It was a teeming jolt of electricity as he passed through. Women everywhere were calling women everywhere to let them know,” said the actor, who also praised Clooney for always being on call when he needed him. “He’s had my back. When I’ve reached out on various projects, there’s not been a time that George doesn’t take an interest and doesn’t get back [to me] almost immediately.” 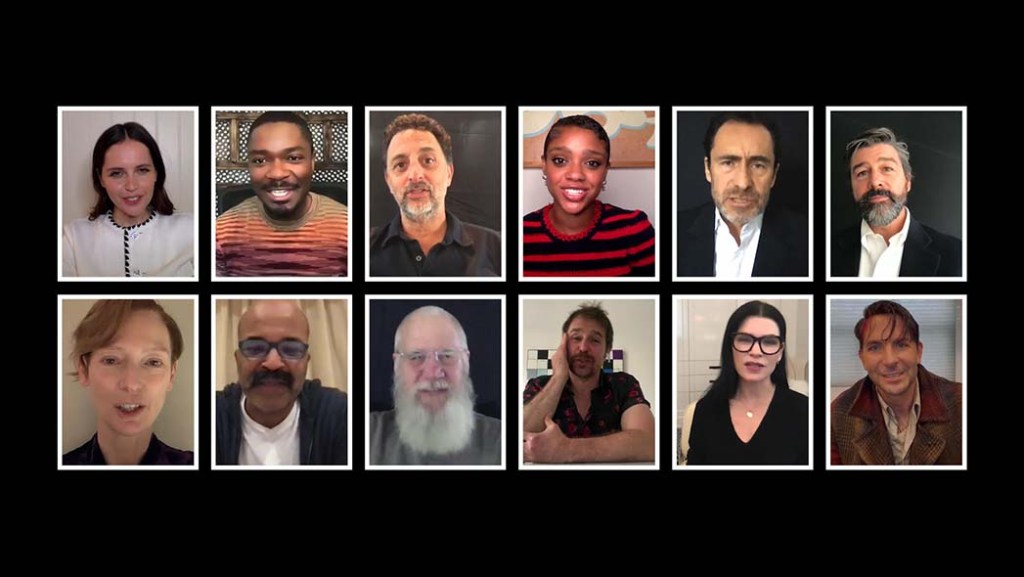 Cooper, appearing in a clip that featured him in character on the set of a film with a bloody forehead, said Clooney is an inspiration for countless young actors who want to stretch themselves creatively by one day writing and directing. “You have inspired us and you have allowed us to dream big because of the way you have lived your life as an artist in this business,” Cooper said, after revealing that he was among those who auditioned for Clooney’s 2008 film Leatherheads. Clooney directed the film and stars alongside Renée Zellweger and John Krasinski.

Jones, who stars in the Netflix film The Midnight Sky, which is premiering Tuesday night for VIPs and press, praised Clooney for his “phenomenal capacity” for seeing his vision through and for being “so fearless” in the way he operates. “He’s one of the most extraordinary people that I’ve ever worked with.”

Clooney’s Michael Clayton co-star Swinton made sure to mention that while she was filming her congratulatory tribute herself in between takes on a movie set and sans mask, she wanted to do so in order to send “all my illegal kisses to you and your glorious girl [wife Amal Clooney] and your babies.”

“We know how great you are. We know that you’re one of the best, the greatest ever. What a sublime actor and what a citizen of the planet you are. I’m here to say this, you’re just a good one. You’re a good man. You have a great heart. You’re super kind, man. I really love you. I want to see more of you please. Have a beautiful night soaking all this up. Well done, MoMA.”

George Clooney's highlight reel was a trip revisiting some of his highest-profile roles in a nearly 40-year-career with credits like "ER," "Out of Sight," "Gravity," "The Descendants," "From Dusk Till Dawn"… pic.twitter.com/HuQ5l66EYT

With our @MoMAFilm partner @CHANEL, we asked Sofia Coppola, Judd Apatow, Cynthia Erivo, Gina Prince-Bythewood, Johan Renck, and Patty Jenkins about the films that inspired them and the importance of preserving the art form. Watch more: https://t.co/5t9fihLFzu #CHANELinCinema pic.twitter.com/05D1QredNn