Quentin Tarantino has called Once Upon a Time in Hollywood his love letter to 1969 Los Angeles, and on Monday night, the auteur delivered that heartfelt homage right in the heart of Tinseltown at the iconic TCL Chinese Theatre.

As the writer, director and producer of his ninth film, Tarantino’s passions for the bygone era could be felt everywhere — from a faux studio soundstage that served as the backdrop for a blush pink carpet to an outdoor lounge dubbed the Pussycat Theatre where VIPs sipped cocktails at sundown waiting for stars Brad Pitt, Leonardo DiCaprio and Margot Robbie to arrive.

Inside, Tarantino’s passions received the biggest spotlight on the big screen, of course, where his fictionalized version of events traced the days of everyone from an aging actor named Rick Dalton and his stunt man Cliff Booth to Sharon Tate and the crazed Manson clan. Spoilers aside, perhaps the biggest surprise of the night was that Tarantino let the film and his cast do all the talking. He didn’t work his way down the press line, nor did he give an introductory speech to start the pic as is typical at major Hollywood premieres. 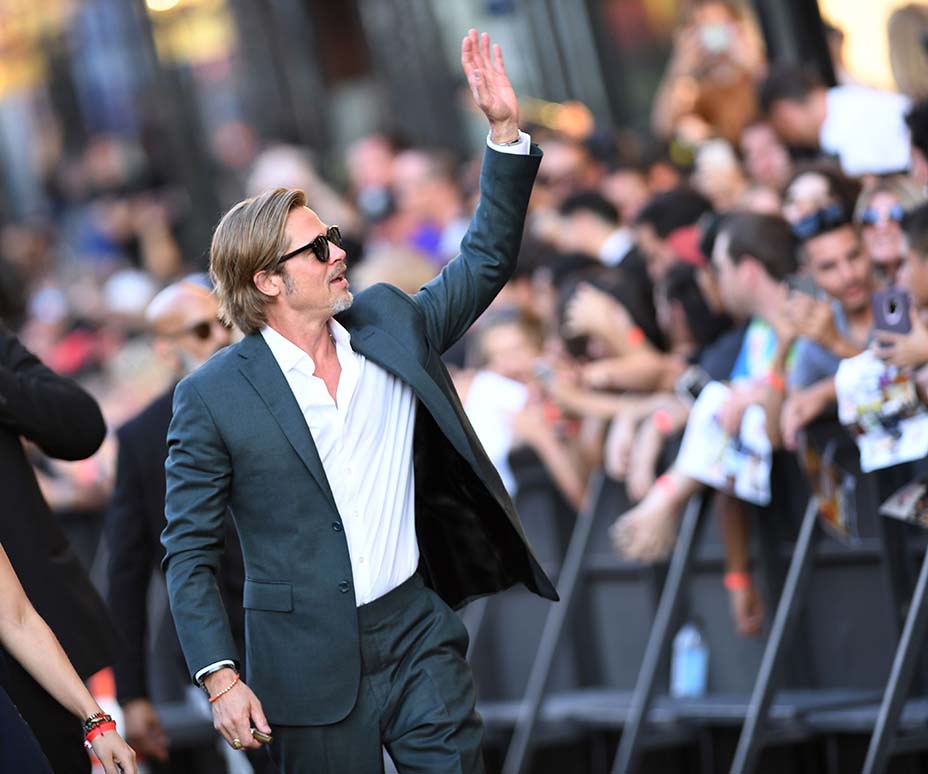 Instead, just after 8 p.m., the lights went down and the Columbia Pictures film started to rapturous applause from the more than 900 guests seated inside the Chinese Theatre, which hosted an array of stars from media, music and movies. And it felt like a true Hollywood scene. Those in the room included Chris Hemsworth; Bradley Cooper; Travis Scott; Snoop Dogg; Rob Lowe; John Stamos; Sofia Vergara and Joe Manganiello; Andy Serkis; Pierce Brosnan; Topher Grace; Walton Goggins; Adriana Lima; and a surprise appearance from pop superstar Britney Spears (making her first public appearance following months of rumors about her mental health).

A-listers aside, Once Upon a Time in Hollywood is being marketed as “the 9th film from Quentin Tarantino,” a selling point that stands out considering the auteur has long said he plans to retire after a tenth effort. However, in recent weeks he has hinted that he may have more work to do, including a possible Star Trek installment with J.J. Abrams or a black-and-white TV series inspired by the fake TV Western Bounty Law with Rick Dalton once again at the center. Whether it was the will-he-or-won’t-he retirement talk, the combined wattage of Pitt and DiCaprio onscreen or the fact that Once Upon a Time in Hollywood is arriving during the peak summer box office season, but the anticipation for the pic seemed especially thick on Monday night.

Even studio chief Tom Rothman seemed giddy at presenting the movie for the first time since its world premiere at the Cannes Film Festival in May. “Pulp Fiction recently celebrated its 25th anniversary and I’ve been wanting to [work with Quentin] since then — for all 25 years. I wouldn’t even say as a studio head, I would say just as a movie fan. It’s a terrific treat,” said Rothman, Tarantino’s first studio partner since the fall of The Weinstein Co. and Harvey Weinstein, with whom Tarantino worked for years. Of their collaboration, Rothman said the thing that surprised him the most about Tarantino and Once Upon a Time in Hollywood is how “emotional” both are.

“He’s really a big softie, and that surprised me. There’s a lot of heart in the film, and he has a lot of heart. Given his boisterous exterior, that was a really wonderful thing to get to know, how sweet a man he is,” continued the exec. “It’s been a truly great experience for the whole company, not just for me but for everybody up and down the line at Sony.”

Since Cannes, Tarantino tweaked the film just a bit, adding a little more than two minutes, including scenes that give more screen time to Robbie’s Tate after taking some heat for it during a festival press conference. The pic received mostly raves out of Cannes and currently sits at 92 percent on Rotten Tomatoes. According to The Hollywood Reporter critic David Rooney, the “bulk of the movie zigs and zags through the experiences of Rick and Cliff, touching on Hollywood lore both based in fact and purely fictional,” weaving in stories about Tate and a wacky and ultimately deranged Manson crew.

Cast and crew were more than happy to pick up Tarantino’s slack by speaking out about everything from his unique audition process to his dedication to detail. Longtime cinematographer Robert Richardson, whose collaborations with Tarantino date back to Kill Bill, called Once Upon a Time their easiest collaboration. 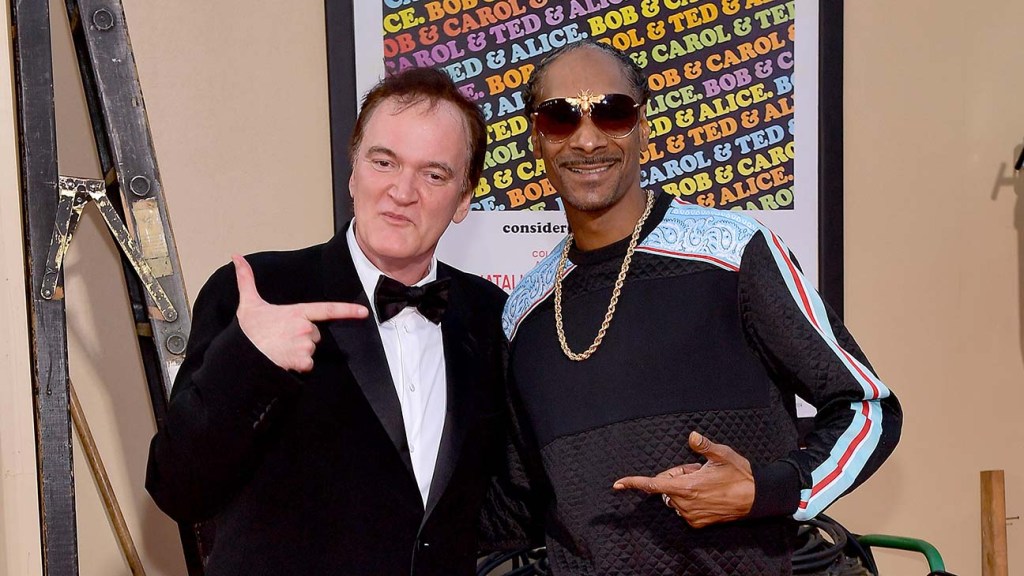 “He was in a superb mood. He loved making this film. Everything was about a past for him — and represented a part of his life at some point. For us, we had no disagreements ever. It was really lovely,” Richardson explained. “We have a very strong relationship, and it’s gotten stronger since [Hateful Eight].”

Others were new to Tarantino’s inner circle, like Moh, who had the tough task of filling Bruce Lee’s shoes during a fight sequence with Pitt’s character: “[Quentin] is so committed; he is 110 percent prepared, and I think it’s right for him to expect the same from everyone, no matter the department. That’s why he is who he is. That’s why everyone who works for him loves it, is loyal and keeps coming back.”

Dern is back and explained the reason why. “His greatest forte is — and I could say the same about [director] Alexander Payne, and I did Nebraska for him — that he respects what [has come] before him. That’s what makes him so good. We didn’t create this shit. We’re trying to take advantage of what we know and come through a different door. That’s Quentin’s big thing.”

Tarantino’s other big thing, at least on set, is that cellphones are not permitted. “No one was allowed to have phones, so we were all able to dive in and experience everything that was going on and just being able to sit and listen to Quentin talk and tell stories about past projects and short films he used to write, and being able to be in that environment was a dream in itself,” said Euphoria star Sweeney, who plays a member of the Manson clan in Once Upon a Time in Hollywood. 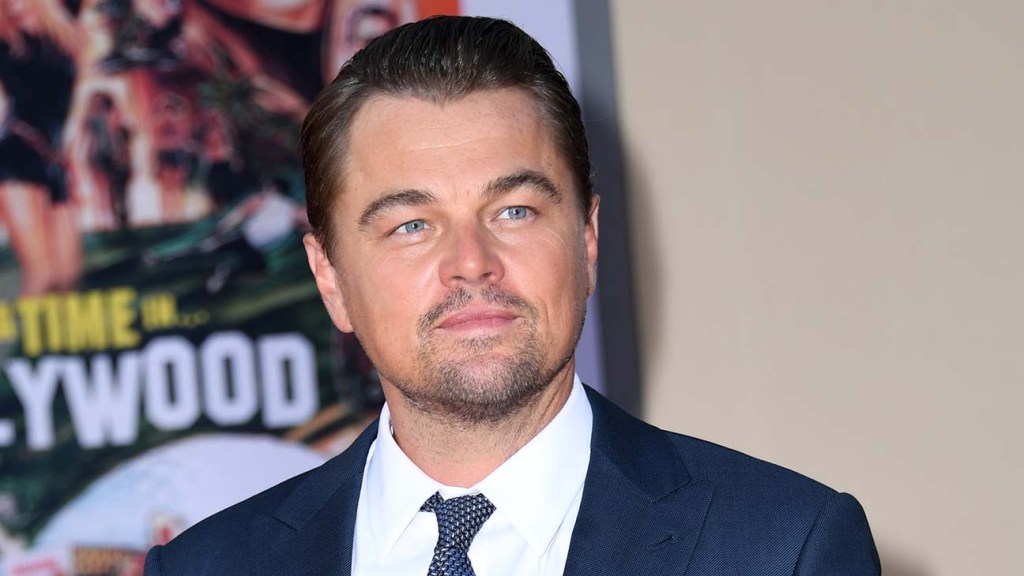 Sweeney shares screen time with actress and writer Harley Quinn Smith, who told THR that working on this film is, by far, “the coolest thing ever.” She added: “I’ve never worked with a director who knows exactly how he wants everything — how he wants it to sound, how he wants it to look, how he wants it to feel. He’s so visual. Most of the time you get to set, you collaborate with the director and that’s really awesome, too. He’s had this vision in his head for years, and this is what it is and this is how we fit into this huge puzzle that he’s created.”

Butler described the “deep feelings of gratitude” for getting to make films at Tarantino’s level, something he will have the chance to do again when he tackles the recently announced Elvis Presley biopic for filmmaker Baz Luhrmann. “The mantra that Quentin has on set is that once you get the take you want, we’re going to do one more and you know why? Because we love making movies and everybody screams it,” he said. “That’s the essence of the soul on set. He’s created such a wonderful family of people. He’s just a genius.”

One of those family members — cinematographer Richardson — said he hopes Tarantino keeps sending out these love letters to Los Angeles and beyond for years to come. “I would be quite sad if he retires after this film — he has a very valuable voice and there are too few people that can do what he does. Actually, no one that can do what he does,” he said. “I’d hate to lose that for American cinema.” 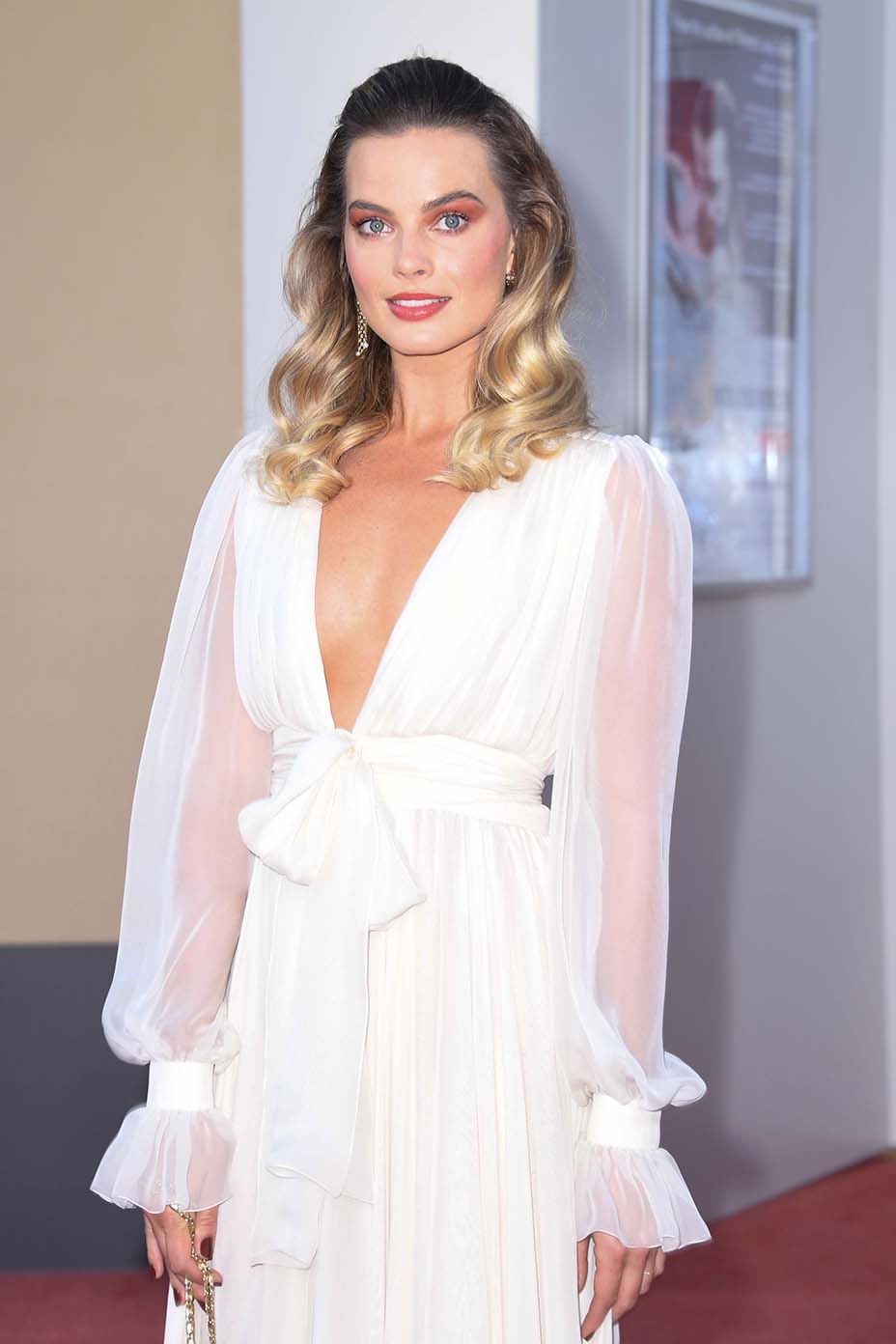 Once upon a time on Monday in July, it was 83 degrees, blazing hot and sunny the day Quentin Tarantino unspooled his 9th film in heart of Hollywood at iconic theater with fans packed on every available speck of pavement. Here’s scene right now #OnceUponATimeInHollywood pic.twitter.com/jz5Xsng5DA

There’s a recreation of Stage 13, a Pussycat Theatre, vintage car, retro Panavisions and a big stage for photo ops where Brad Pitt, Leonardo DiCaprio and Margot Robbie will be posing in 3 hrs from now. #OnceUponATimeInHollywood pic.twitter.com/Vm8zAzBWVL

"There Is a Panic About Sex Now": John Cameron Mitchell on How Culture Has Shifted Since Release of Explicit 'Shortbus'