It was fated to be eclipsed by a historic blunder. But if producers had their way, the day-after discussion would have been dominated by another topic entirely — the duping of a group of tourists into wandering into the Academy Awards.

Depending on who you ask, the stunt was either a masterful bit of high-wire comedy or a condescending prank that used everyday people like Gary Alan Coe, a 59-year-old African-American man in basketball shorts and a “Hollywood” sweatshirt, as a punchline.

In the days following the ceremony, the latter narrative seemed to dominate — particularly as details emerged regarding the criminal background of “Gary from Chicago,” as social media dubbed him.

Conspiracy theories circulated: that the bit was scripted; that the majority of the “tourists” were actors; that the affable Coe, who had served 20 years in prison and had been released just three days prior to Sunday’s ceremony, was pre-scouted by producers and groomed for viral stardom.

None of those theories are true, however, as The Hollywood Reporter has spoken to several people with knowledge of how the tour-bus prank unfolded.

It was a stunt that took one month of planning and which relied — to an almost astonishing extent, for a live TV event of this magnitude — on sheer faith that its marks would behave entertainingly, but not inappropriately, when introduced to the world’s most insulated stars. 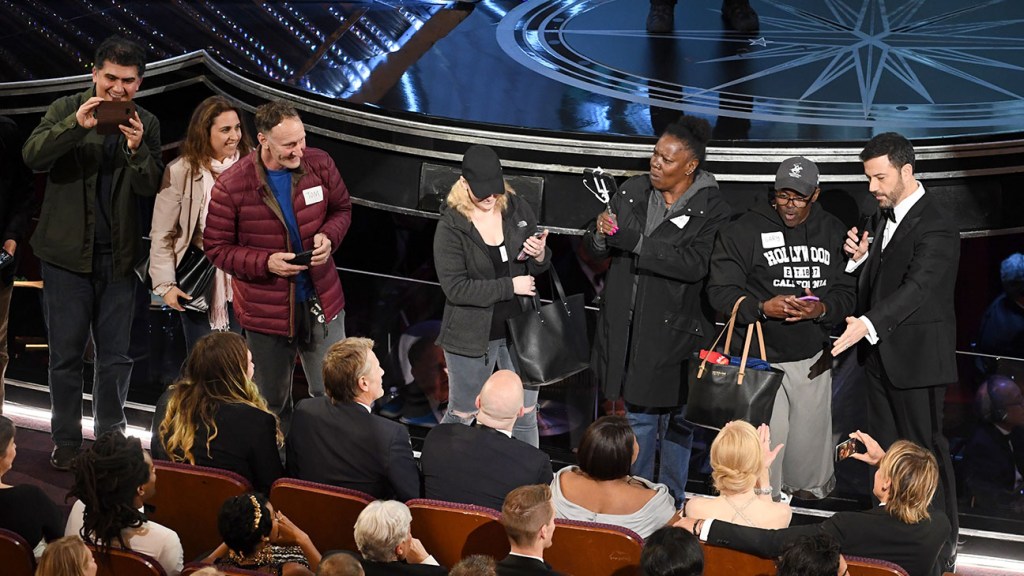 In mid-January, host Jimmy Kimmel hinted that he was interested in mounting a stunt of this nature. Sitting with THR in his dressing room, he praised Oscars segments where “you don’t know how they’re going to turn out, like when Ellen [DeGeneres] orders pizza for the audience.”

He reminisced about the 2004 Emmys, when host Garry Shandling brought out two “real people” in blindfolds, Bruce Millam and Amy Scholsohn, to present the award for outstanding reality competition program.

“They didn’t know they were coming to the Emmys,” Kimmel said with an impish smile. “And Garry brought them out onstage and unmasked them and got their real reaction to suddenly being onstage at the Emmys. It’s a real swing, and I like to take a couple of those.”

If the late Shandling, one of Kimmel’s comedy heroes, could do it to two people at the Emmys, then Kimmel was determined to pull off an even bigger prank at the Oscars. A tour bus seemed an obvious way to go — the open-roof double-deckers pass his Hollywood Boulevard venue, situated directly across from the TCL Chinese Theatre, at all hours of the day.

In fact, Jimmy Kimmel Live! producers had developed a working relationship with the company that owns and operates the busses, StarLine Tours, nine months prior. The show was jokingly pushing Kimmel as a potential vice-presidential candidate for either party — “a good, solid number two” went the vaguely scatological tagline — and the comedian filmed a segment in which he waved to Hollywood Boulevard pedestrians from the roof of one of the busses.

The sketch went so well that producers discussed several other potential ideas with the company’s 70-year-old chairman, Kamrouz Farhadi. None of those came to fruition — that is until about one month before the Oscars. “They said, ‘We have an idea,'” Farhadi recalls. “They didn’t even say it was for the Oscars.”

After having Farhadi sign a non-disclosure agreement, they invited him to Kimmel’s offices, where they described the Oscars stunt they had in mind, which was essentially what they would successfully execute during the broadcast.

Getting there, however, was not easy. Producers experimented with a wide range of vehicles — from passenger vans to busses — before settling on the double-decker. Cameras were rigged at various locations and angles. Even the speed of the vehicles was a factor: It was determined that the bus needed to travel at 12 miles per hour to get the clearest images for broadcast.

Meanwhile, producers were determined not to let the secret leak. Only four people outside of Kimmel’s inner-circle — Farhadi, two StarLine managers and the driver — knew the truth.

“It was step-by-step, getting it prepared, doing the test runs, trying things out — while trying to keep it a secret from everybody else,” Farhadi says.

On Feb. 26, it was showtime. The scene of the crime unfolded several blocks down Hollywood Boulevard — which was completely shut down for the Oscars between Cahuenga Boulevard and El Cerrito Place — at Vine Street, outside the Pantages Theatre (which serves as StarLine’s temporary headquarters every year at Oscars time).

There show producers and StarLine employees had precious little time to fill a bus with unwitting tourists who seemed both fun and sane. The ruse was to offer them a free tour for a “promotional video” that StarLine was producing.

Some of the riders had just hopped off another tour bus but were up for another ride. Others, like Coe and his fiancee, Vickie Vines, just happened to be strolling along the boulevard when they were enlisted.

To say that “Gary from Chicago” — who lived in that city from 1969 to 1992, when he relocated to the West Coast — was in a good mood that afternoon would be an understatement. He had only been a free man for 72 scant hours when he was approached, after having served 20 years at Corcoran State, a men’s prison in Corcoran, Calif.

His crime? He stole three perfume sets, valued at $279, from a Robinsons-May department store in Redondo Beach on New Year’s Eve 1996. But because he had a prior record — attempted rape at age 18 in 1978, unarmed robbery in 1982, and a burglary in 1992 — he fell prey to California’s three-strikes law, which meant he got a life sentence for the perfume theft.

But a 2012 ballot measure in California, Prop 36, changed the law so that nonviolent offenders could petition for release, which Coe did. The L.A. public defender assigned to the case, Karen Nash, said he was a perfect candidate.

“Gary had a really positive — what’s called ‘programming’ — in prison, where he did a lot of rehabilitative work and attended counseling and kept a job and went to school,” Nash says. “He didn’t get in trouble very often. A few little violations — nothing very serious. So the judge determined he wasn’t a danger, so he was released.”

Vines, whom Coe had met while in prison, greeted him upon his release on Friday, Feb. 24, and the two had been savoring his freedom all weekend. “They were just out sightseeing,” says Nash. “Gary asked, ‘How much does it cost?’ They said, ‘No, we’ll give you the tickets.’ It’s this amazing, really happy story.'”

Oscars Producer Michael De Luca Breaks Silence on Backstage Chaos: "It Was Like the Hindenburg"

With the bus full, producers then circulated releases for the passengers to sign. Because it was allegedly being filmed for a promotional video, they suspected nothing. Two large security guards, hired by the Academy Awards, kept a watchful eye on the group.

Then the bus started on its way, taking the passengers on an hour-long tour of Hollywood and West Hollywood. From Vine it made its way to Sunset Boulevard, then carried them along to the Sunset Strip, then down to Doheny Drive in Beverly Hills, then back along Santa Monica Boulevard to La Brea Avenue and back up to Hollywood Boulevard again.

Still suspecting nothing, the group was told to disembark at the Hollywood & Highland Center. They spent roughly 20 minutes inside the StarLine ticketing office, where they were closely observed by producers and security “to see that nobody was going to react possibly in an odd way, if you see what I mean,” Farhadi says.

Told they were going to tour an exhibit of vintage Oscars gowns, they were then corralled and moved toward the Dolby Theatre. The rest unfolded live in front of a U.S. audience of 33 million.

Coe, who spent much of his time videotaping the surreal experience with a smartphone and at one point was mock-wed to Vines by Denzel Washington, just proved a natural when it came to snatching the spotlight.

“The shock on his face was most visible to everybody — to the whole world, really,” Farhadi says. “He was open-mouth most of the time.”