When public health officials in Los Angeles County gave the go-ahead in late May for restaurants to reopen in the city following an extended closure caused by the coronavirus pandemic, Alexis Martin Woodall and her chef husband Dave Woodall hustled to ready their eatery Red Herring for a new reality.

The restaurant — located at 770 S. Grand Avenue inside the luxury development known as 8th and Grand — would shift from full-service to a weekends-only schedule starting May 30 offering take-out and curbside pick-up with a limited menu focusing on comfort fare. It made more sense financially amid the dining room restrictions and they liked the idea of offering breakfast sandwiches and brunch favorites like homemade bacon and scones, barbeque kits with a variety of homemade sauces, pickles and macaroni and cheese, desserts and booze. As protests swelled across the country, the Woodalls also committed to donating a portion of sales to the Bail Project.

But it just so happened that the date coincided with unrest in front of their front door on the Friday before the big day. Peaceful protests gave way to riots, looting and property damage suffered by neighboring businesses like Bottega Louie, CVS and others. “We were here at the time and we looked up Grand to see hordes of people who came down and then eventually dispersed,” said Alexis, a veteran creative producer who serves as president of Ryan Murphy Prods. “Then an hour later, cops were outside in full riot gear. It got quiet the minute it got dark and then, we just heard explosions, all this noise and gunfire. It was chaos.”

They turned off the lights, moved away from the windows which were covered in paper and just waited. Despite a rock or two and some minimal graffiti, they were spared from any significant damage and were able to get home OK. “We were so lucky,” she explained of their safety as well as that of the restaurant, which had only been opened since Dec. 16 following a previous incarnation in Eagle Rock. They then shared a passionate statement on Instagram, signaling their support for the movement by saying that “it is up to every single one of us to fight for justice and for George Floyd. For Tony McDade. For Breonna Taylor. For Ahmaud Arbery. And for everyone one of our friends and colleagues who live in a world where they are targeted and deliberately held back.”

A week later, the Woodalls were back in the restaurant prepping for what would be the first full weekend of business and a renewed sense to constantly adapt to what is happening outside. “The word I used over and over again is pivot. We pivoted, and as a producer, you always have to look at the lay of the land and ask yourself if what you’re doing is the most efficient,” she said. “When we first shut down [with the pandemic], I was like, ‘Oh well, if this is what ends our dream, it’s a clear narrative and at least it wasn’t our fault.’ But then, standing here later while watering the plants, I just said, ‘No, we’re not done with this story yet. I’m compelled by the fact that I believe we have a greatness and enough supporters in the community that makes us want to fight to stay open so people can continue to celebrate with us and mark their lives with us. That’s what a restaurant is.”

Alexis said the skills she honed working for Ryan Murphy have proven invaluable. “We have a lot of projects and we have a lot of eyes on us because the scope is big. You must know how to roll with it and how to keep your temperature low while things are burning.”

In re-opening, they relied on a skeleton crew consisting of director of operations Collette Nolte, general manager Megan Lee and chef de cuisine Derek McCabe. In total, Red Herring employed 60 before the pandemic hit but in order to secure a future, they were forced to lay off the majority with the intention that all will be welcomed back once the businesses revs back up. But that’s not to say that there weren’t tears.

“We were all crying,” Alexis recalled of having to say goodbye, temporarily, to their employees due to the financial burden of staying shuttered for weeks on end as a new restaurant without the safety net of a slew of investors (Of that choice, she said: “The smartest thing we did is bet on ourselves and the dumbest thing we did is bet on ourselves.”). “We didn’t just open a restaurant, we opened a space to share life with other people. As beautiful as the space is and as amazing as the food is, what I love the most is the people. It’s a home and a safe space for a lot of people.”

There have been conversations about possibly expanding to offer additional options similar to a café with grocery items a ’la Joan’s on Third but nothing is finalized. As for how they’re managing now and looking towards the future, Dave says “it’s a one day” at this point. “The events going on are so much larger than us and more important that there’s no benefit of thinking too far ahead.” His wife adds: “At this point, knowing what we’ve been through at this point in our lives and careers and everything we’ve seen in our lives, it’s going to be OK. And if it’s not OK, we’re going to be OK.”

He adds: “The baseline metric of what really matters in our lives is that she and I are healthy and we’re together. Everything always falls apart and comes back together in its own time.” 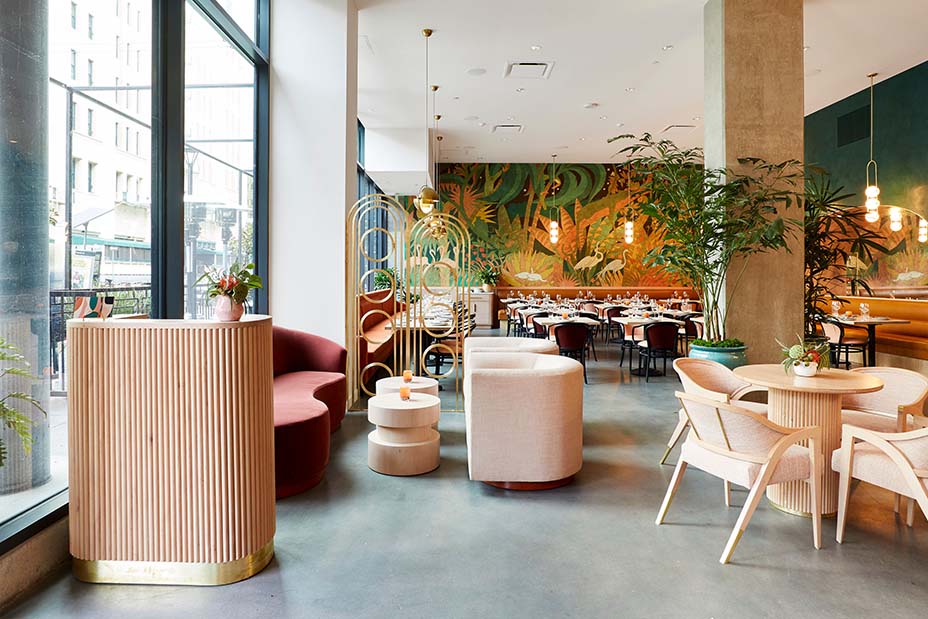 Sometimes you just need fresh additions to your daily meal prep. From our killer habañero sauce to our duck confit legs (remember those delish scallion pancakes?!) we’ve got some great options for your home kitchen, all shopable on our website give us a call or email to order ahead.

She Runs Ryan Murphy's Company and Moonlights as a Downtown L.A. Restaurateur